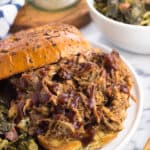 Slow cooker pulled pork is a versatile main dish recipe perfect for sandwiches, nachos, tacos, and more. With easy prep and lots of hands-off time, you’ll love the flavor of this slightly smoky and spiced up seasoning rub.

It’s a new year and I’m already crossing off a resolution from my list: share my slow cooker pulled pork recipe on the blog.

Not that that’s a great big achievement or anything. I’ve been meaning to for years, actually, so if anything it’s a sign of how successfully I can procrastinate.

But still, let’s round out the first month of the year with an easy win.

P.S. If you’re looking for something quicker, this coffee-rubbed (!) Instant Pot pulled pork will be more your speed.

Ideally use the Boston butt cut to make slow cooker pulled pork, also known as pork butt. This cut is from the thick shoulder region (not the rear!) and has lots of great fat marbling. More marbling means more flavor.

If you’re unable to get Boston/pork butt, pork shoulder is another good option. While it has a bit less marbling than a Boston butt, it’s from the same region and will cook to be nice and shreddable. Either cut is best intended for low and slow methods like crock pot cooking.

While your favorite pre-made spice rub would definitely work, I’m partial to this blend of herbs and spices, made with all (or nearly all) pantry staples. This pulled pork spice blend includes:

It’s spiced, smoky, and warm, from the tiniest bit of cinnamon. It might seem out of place adding cinnamon to a savory meat recipe, but it really ties the flavors together and adds warmth and something special.

I know I just said that we want the fat in our pork shoulder or Boston butt to make pulled pork, but my preference is to trim away SOME of the fat cap, which is the very thick, hard, and solid white layer of fat along one side of the meat.

Reason being is that we want the spice rub to get a chance to get in there with the meat, and this super thick layer can get in the way. There’s plenty of fat marbled throughout the meat that I’ve never found pulled pork made with a somewhat trimmed fat cap dry or lacking in flavor.

It also doesn’t break down entirely as the meat cooks, and will have to be sliced into small pieces in order to mix into the pulled pork at the end. When doing that with a full cap-on cut of meat, I usually end up discarding a portion of the fat cap when slicing because it’s just too fatty.

Disclaimer: I know there are multiple schools of thought here, making do-you-or-do-you-not-trim-the-fat-cap a controversial subject. Some say leaving it on and placing it cap-side up helps baste the meat as it cooks.

Curious if I have been in the wrong for years by trimming the fat cap, I found this interesting article that digs into the science behind all things fat cap. They advocate for trimming the cap in most circumstances to between one-eighth and one-quarter of an inch. (Since the slow cooker most certainly does not produce a crisp exterior on anything, I say we’re exempt from the situation where leaving it on would be beneficial.)

Setting Up the Crock Pot

What temperature should pulled pork be?

Just like with grilled chicken drumsticks, we want to go beyond the minimum food safety temperature here for ideal texture. While the minimum temperature for fresh pork is 145°F (per foodsafety.gov), we want to aim for the pork roast to register in the 195-200°F range so that the connective tissues have broken down sufficiently and the pork can easily be shreddable.

How much pulled pork per person to serve?

This amount will vary depending upon how you’re serving it. Count on one-third cup of cooked pulled pork per person (think a nice scoop for a slider). Keep in mind that a raw pork butt will shed fat and liquid during the trimming/cooking process, so it’s not a straight “every one pound of raw pork will feed three people” calculation. A 4 1/2 pound pork roast will yield roughly 8-10 cooked pulled pork servings.

What to do with leftover pulled pork? 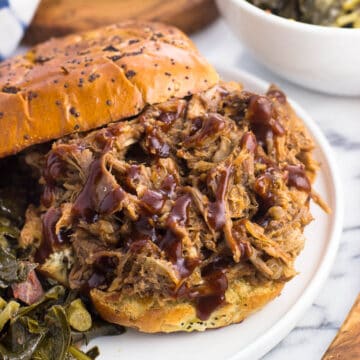 Pork: A Boston butt (also known as pork butt) is preferred for this recipe for its fat marbling. While a pork shoulder has less marbling, it can also work here to make tasty crock pot pulled pork. Slow cooker size: The slow cooker you see in these photos is round and has a 4.5-quart capacity. It fits a 4 to 4 1/2-lb pork shoulder/Boston butt comfortably. A larger slow cooker would be just fine to use, though I would caution against using one smaller than 4.5 quarts. If your slow cooker is on the smaller side, I recommend a boneless pork butt as it will be smaller than bone-in. Storage Instructions: Store leftover pulled pork along with the skimmed cooking liquid in air-tight containers in the refrigerator for 3-4 days. Freezer Instructions: Once cooled, place pulled pork in batches in air-tight containers or sealable plastic bags (with the excess air pressed out) with the skimmed cooking liquid. This makes it easier to just pull out what you need for a meal. Freeze for 3-4 months, reheating the pulled pork in a pot on the stove over low heat. Nutrition: Nutritional information is an estimate for the meat only/cooking liquid and additional BBQ sauce, sandwich buns or whatever else you might serve it with.

Method with slicing the onions/base spice rub adapted from chowhound.