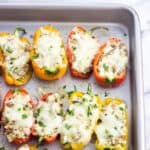 I'm one of those people who hover around the appetizer table at parties. Always have been! A little of this and a little of that is my M.O. when it comes to party food.

Sometimes at home we'll even make a few traditional appetizer-type recipes and share them for dinner. Baked clam dip is a frequent pick (I could eat the whole thing), as are crispy brussels sprouts.

These sausage stuffed mini peppers totally fit the bill for my favorite kind of appetizer, which has some substance and oomph behind it when compared to something like chips and salsa.

What are mini sweet peppers?

Mini sweet peppers are tiny, slightly sweeter versions of bell peppers. Even though some of the smaller, curvy red ones look like red jalapenos, just like bell peppers they're not spicy at all.

They do have seeds though, so slicing them in half and removing the seeds and pith, the white center part to which the seeds attach, is the first step in prepping these mini peppers.

And while you can totally eat mini peppers raw, you can also roast them briefly to soften them without making them mushy.

Some other uses for mini sweet peppers (besides stuffing them) are slicing them raw to add to salads, dipping slices in hummus, pan- or oven-roasting them along with your favorite cooking oil and spices, or even grilling them.

All of these recipes call for the Italian sausage once it's already been browned, so cooking the whole pound package and then dividing it half for these stuffed mini peppers and half for another dish is an easy way to get ahead on meal prep. 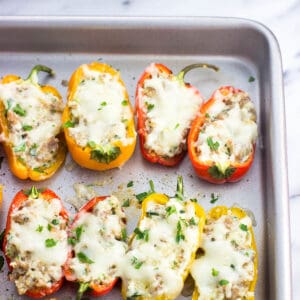 Ingredient Notes Sausage: Any of the ground Italian sausage varieties will do so pick your preferred kind:  sweet, mild, or hot. Either pork or turkey also works. Shredded cheese: One cheese or a blend works. Some good options are mozzarella, provolone, pepper/colby/monterey jack, and extra sharp white cheddar.  Recipe Tips