This healthy stuffed poblano peppers recipe has been a long time coming.

Originally I had planned for this dish to yield four servings. When it came time to stuff the four poblanos I had prepped, there was enough filling for five peppers.

So the next time I made it I prepped five peppers. Would you believe the same amount of the same filling ingredients this time around made enough for six peppers? I felt like there was some Strega Nona magic pasta pot kind of magic going on around here.

Thankfully attempt #3 held strong at six peppers, so that's where we landed. Six stuffed poblano peppers packed with a mix of turkey and other healthy southwestern flavors. This poblano peppers recipe seriously doesn't taste 'healthy' at all.

Longer answer: The poblano pepper rates between 1,000 and 2,000 units on the Scoville scale (per epicurious). Considering the scale goes up to 3,000,000 (YIKES) and popular jalapeno peppers fall between 3,500 and 8,000 units, you don't have much to worry about with poblanos.

That said, you'll still want to remove the seeds and pith before filling, and do so carefully. I highly recommend wearing disposable gloves for this as you'll be handling six poblano peppers here and burning fingers are no joke. Plus the risk of accidentally touching your eyes with capsaicin on them?

NOOO GOD. NO GOD PLEASE NO. NO. NO.  à la Michael Scott on that one.

How to make stuffed poblano peppers

And as I've found, it's a question that doesn't have a right or wrong answer.

It all comes down to your tolerance for the poblano pepper skin. Roasting the poblanos before filling them gives you the opportunity to remove the skin, leaving you a slightly-charred and softened pepper vehicle for all this filling goodness. You know that I'm all about how to roast poblano peppers in the oven.

That said, it takes longer to remove the seeds once the peppers are roasted because they're slippery. And with six peppers to de-seed, the extra time can add up. The poblanos are also very tender, which can lead to tearing. Not a big deal here since they're just sitting on a baking sheet, but some filling can spill out. Just FYI -- a worthwhile trade-off for some of you, maybe not all.

For those that would rather not bother, you don't have to pre-roast the peppers. After halving them and filling them raw, I find they soften sufficiently during a longer (45-50 minute) cook time. And with all of the elements and textures going on in the filling, I didn't find the skin to be too bothersome in the finished dish.

If you pre-roast the poblanos (like the photo directly above) you're front-loading your cook time or can save some time by prepping them ahead. The filling ingredients are fully cooked so they'll just need 10-15 minutes or so for the cheese to melt and everything to heat.

It really comes down to your preference.

Now let's talk filling. No matter how you prep the poblanos, you'll start by browning up ground turkey, then onion and garlic. Season everything with chili powder, oregano, cumin, salt, and pepper, then add in black beans, corn, and a jar of salsa (or leftover quick chipotle salsa).

The salsa adds a great flavor and ensures the turkey filling isn't dry whatsoever. Plus you can use your preferred variety - mild, spicy, low-sodium, etc.

All that's left is to stir in some fresh cilantro and crumbled cotija cheese (or queso fresco). This filling is ready to roll. Into the poblanos it goes, topped with sharp cheddar and baked until heated and the cheese is melty.

There are several elements that help keep this poblano pepper recipe on the healthier side of things. 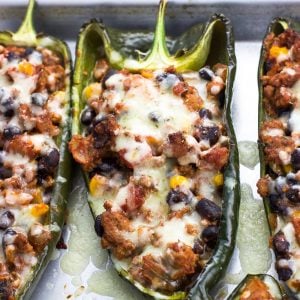 If you would like to roast the poblanos before filling them in order to remove the skin:   Nutritional info is an estimate, which is based on the usage of lean ground turkey, 2% cheddar, part-skim cotija cheese, and rinsed and drained low-sodium black beans. Amounts will vary based on which variety of ingredients you use, such as salsa, cheese, etc.