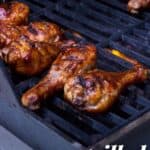 It’s that time of year when I eye up whatever protein I have and consider scrapping all recipe plans to cook it on the grill. Not that grilling doesn’t benefit by having an actual recipe (this is a post about one, after all), but things go a little loosey goosey-er out there, in a good way.

Grilled chicken wings have long been a favorite (up there with air fryer chicken wings, for sure) and other chicken parts are no exception. These grilled chicken drumsticks are the epitome of a straight-forward, delicious main dish recipe that has plenty of wiggle room for you to make your own.

Please do not use cooking sprays on a hot grill as that can cause flare ups!

A note on temperature: finishing the chicken with BBQ sauce over direct heat will raise the internal temperature of the drumsticks above 165°F, but still produces perfectly juicy meat. I’ve checked the temperature after doing so and have seen the temperature go above 185°F with tender, absolutely delicious results. With the skin intact and chicken drumsticks being dark meat, you won’t risk dried out chicken.

Should you remove skin from chicken drumsticks?

Grilling the chicken drumsticks with the skin on helps ensure the meat ends up juicy by preserving moisture during the cooking process. You can remove some of the skin after they’ve been cooked if you prefer.

Can drumsticks be a little pink?

Per the USDA, grilled chicken may still have a pinkish tinge after reaching 165°F, the minimum safe temperature for poultry. Because of this, an instant-read meat thermometer is key in taking the guesswork out of knowing precisely when chicken is fully-cooked.

What to serve with chicken drumsticks?

A cool Greek yogurt kale caesar salad is a refreshing match for grilled chicken, as is lemon quinoa salad. Both of those can be made ahead of time. If you’re looking for a veggie pairing that can be thrown on the grill for efficiency, I make spicy sauteed asparagus on the grill all the time with great results. 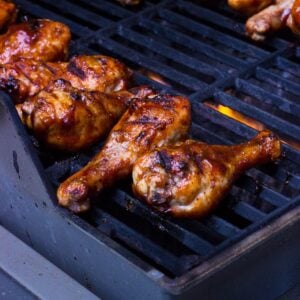 Ingredient Notes Drumsticks: This recipe can easily be scaled up or down. For convenience it’s written for six drumsticks, which is the approximate size of one regular supermarket package. When making this recipe I usually 2x or 3x for a larger yield. Spices: There is a lot of room to do your own thing here, from just using salt and pepper to adding garlic powder, ground cayenne, etc. Oil: Use a neutral-flavored, high-heat oil for oiling the grill grates such as canola, vegetable, or corn oil. Recipe Tips