This herby lemon quinoa salad is a hearty side dish that’s bursting with bold flavors. Parmesan, onion, and garlic pair well with bright lemon notes and herbs in this healthy flavored quinoa recipe. 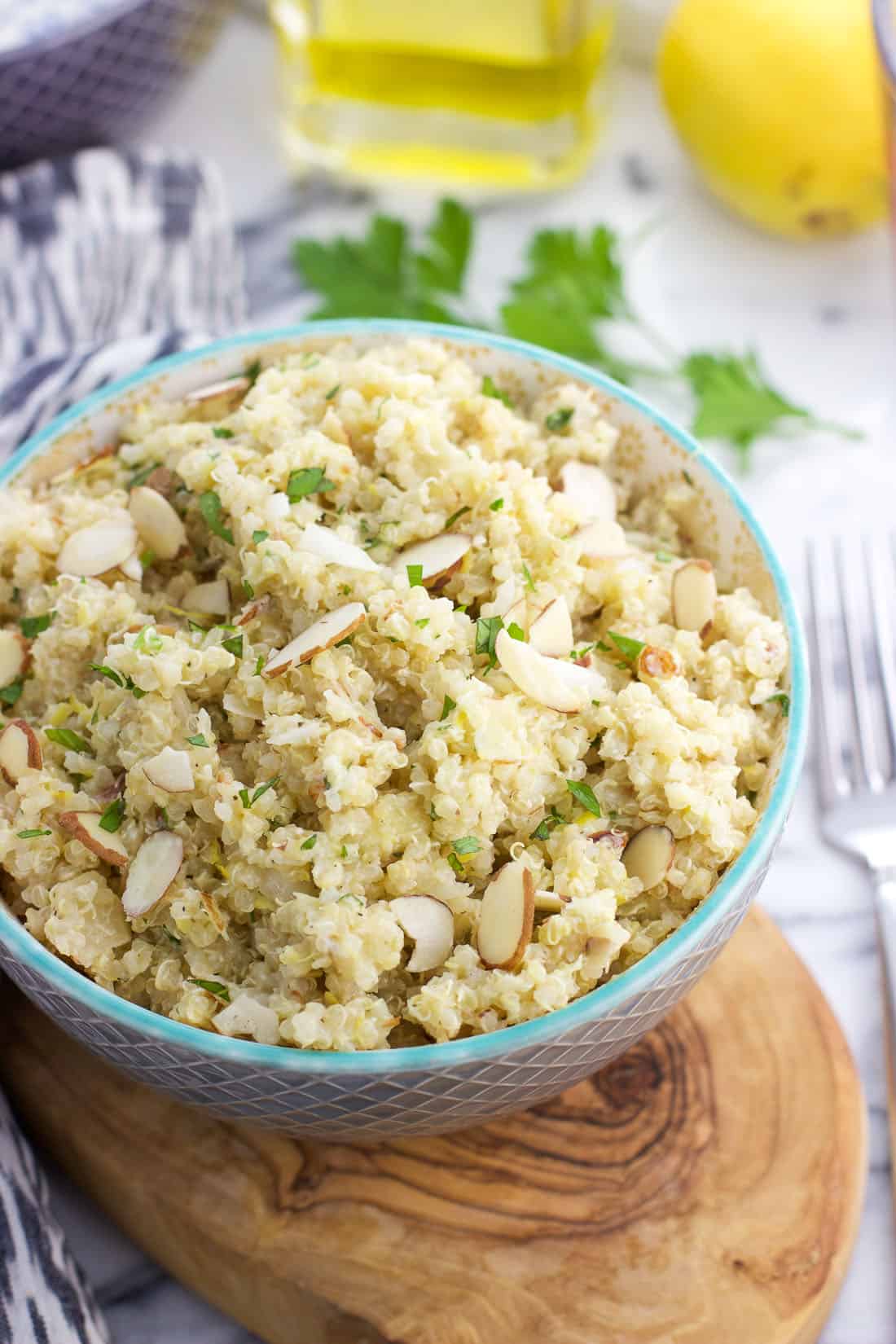 Sometimes people ask me if my blog is all healthy food, and sometimes other people will ask if I get sick of “all the desserts” that must come along with running a food blog.

In all honesty, neither is super applicable. I know I don’t have a narrow niche, with the nearly 400 (!) recipe posts ranging from better-for-you main meals to special occasion desserts to nearly everything in-between.

That’s not to say I haven’t flirted with the idea of having a stronger central theme for my recipes. But rather I chose for the recipes on this blog to mirror how I eat in real life: a fair amount of health-minded recipes that don’t feature too too many processed ingredients but are still bold and flavorful. And it sounds like a lot of you eat the same way. 🙂 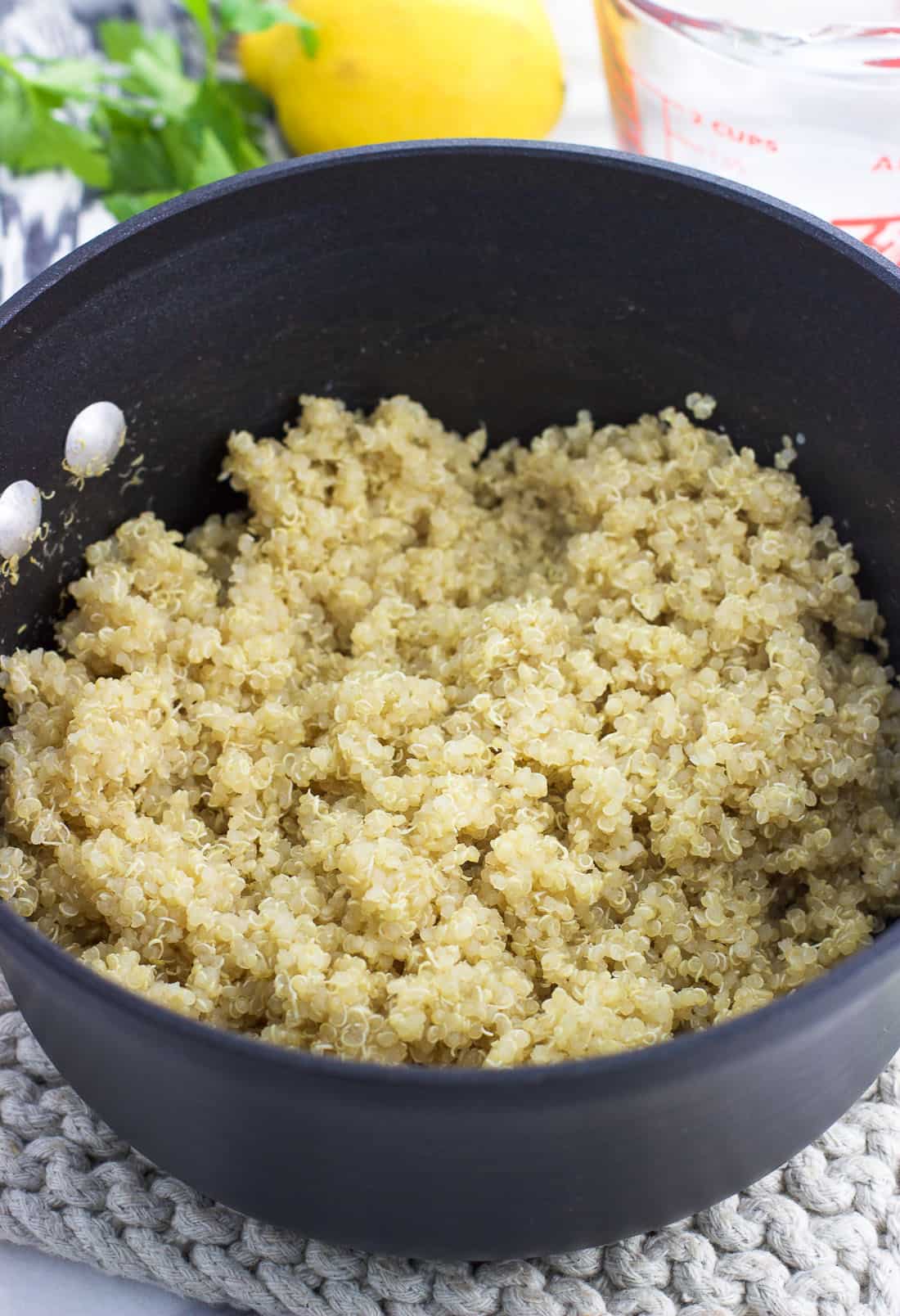 Here’s a time when this balance comes into play. After a few weeks of indulgence, including one friend’s wedding, another friend’s bachelorette weekend, and quite a few rounds of chips and queso, it was time to take a break from all the celebratory foods and lean into something healthier – quinoa.

As we dig into this herby lemon quinoa salad, a fair warning to all the lemon haters out there. You might want to skip this one.

Reason being is that the lemon flavor definitely shines through! 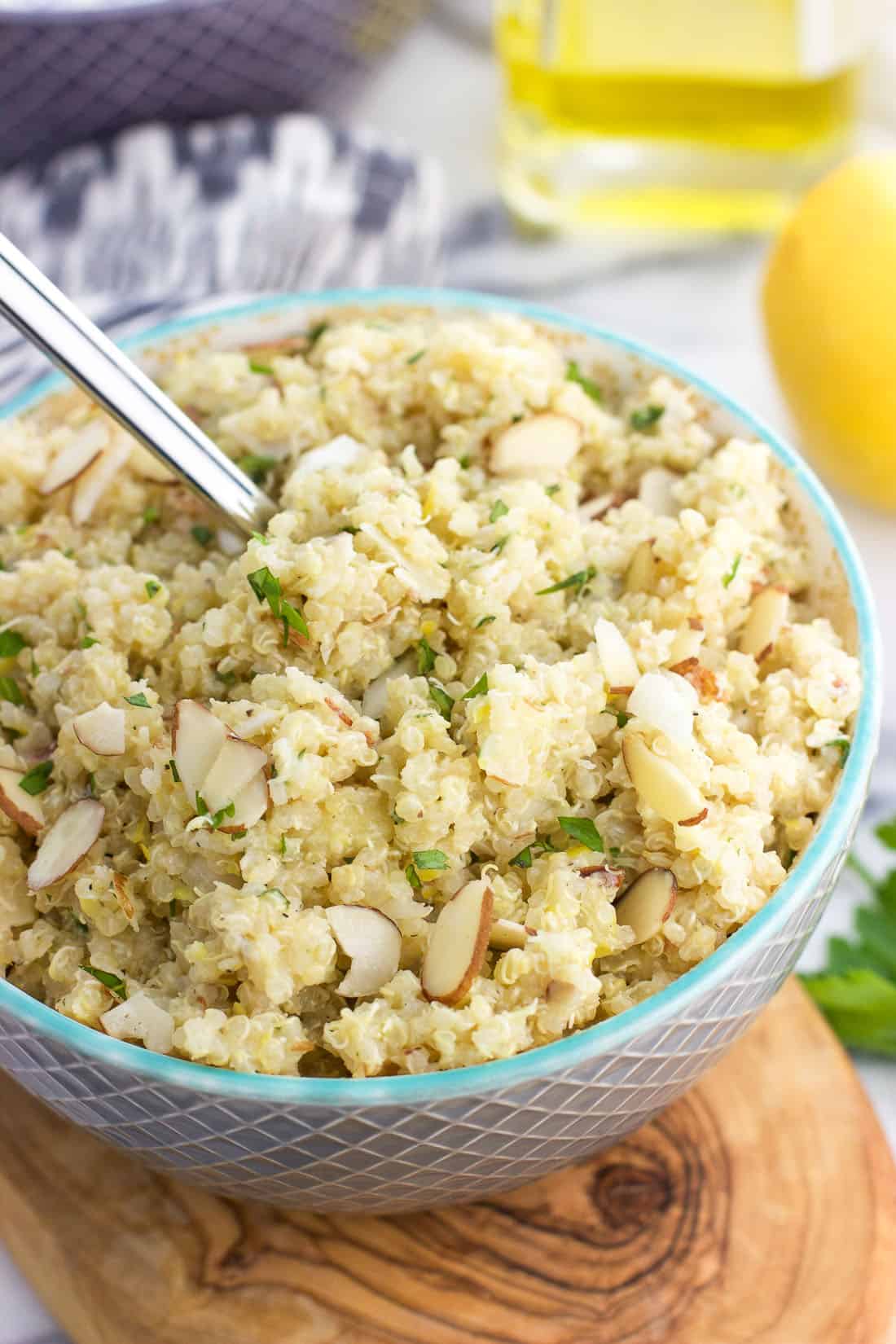 Let’s start with that lemon flavor. I include the juice and zest of two lemons, which brings a bold citrus flavor to the final dish. If you’re not a huge lemon fan, start with using the zest and juice of one lemon and then do a taste-test. Add the other one at that point if you want.

The base of this lemon quinoa salad is one cup of dry quinoa, which I prefer cooking in reduced-sodium chicken broth. While you can absolutely use water if you like, cooking quinoa (and rice) in broth adds an extra boost of flavor that I love in simple flavored quinoa salads like this.

As for the rest of this recipe, it leans heavily into other Mediterranean flavors such as olive oil, garlic, onion, fresh parsley, fresh basil, Parmesan, and sliced almonds. All good things. 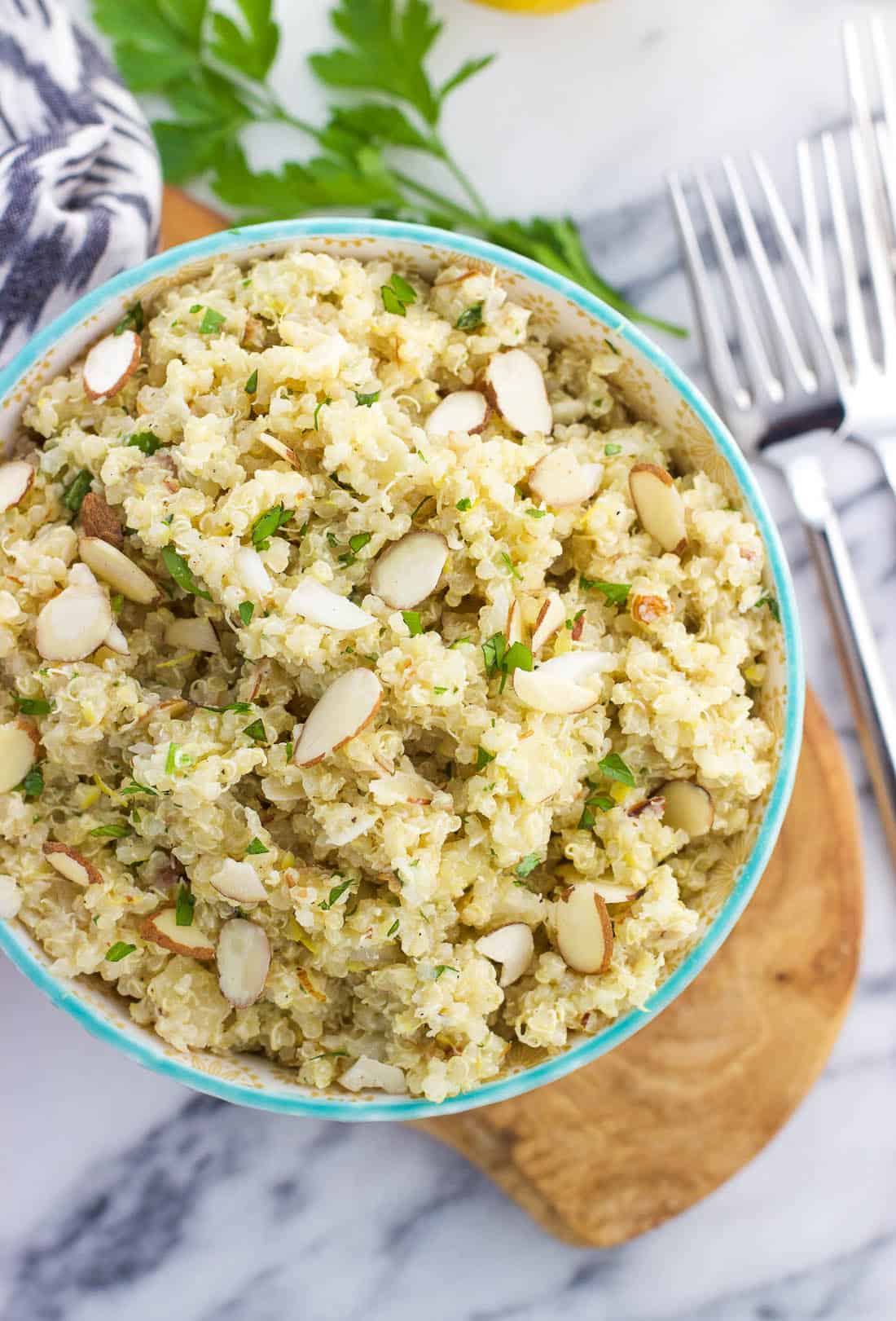 Since this lemon quinoa salad is as simple as preparing the quinoa and stirring in all of the other ingredients, you can certainly zhush up just about any of the ingredients in the quantities that you like. More or less Parmesan, different types of herbs (maybe add mint?), almonds or no almonds, etc.

The only place I wouldn’t veer off the recipe would be with the quantities of quinoa and broth. Two cups of liquid to one cup of dry quinoa are what you need to result in fluffy cooked quinoa. Since we’ll be adding some liquid later on (lemon juice and olive oil), we want our quinoa to be as fluffy and dry as possible once it’s done cooking.

And speaking of quinoa be sure to rinse the dry quinoa before cooking, as this helps remove the quinoa’s bitter coating (which is called saponin) and leads to better tasting cooked quinoa.

Just a heads up that after you add the olive oil and lemon juice, the quinoa may appear too wet. The grated Parmesan will soak up some of the excess moisture. If you like you can also put the sauce pan back on the warm burner (turned off) to help speed up the process of reducing the moisture. 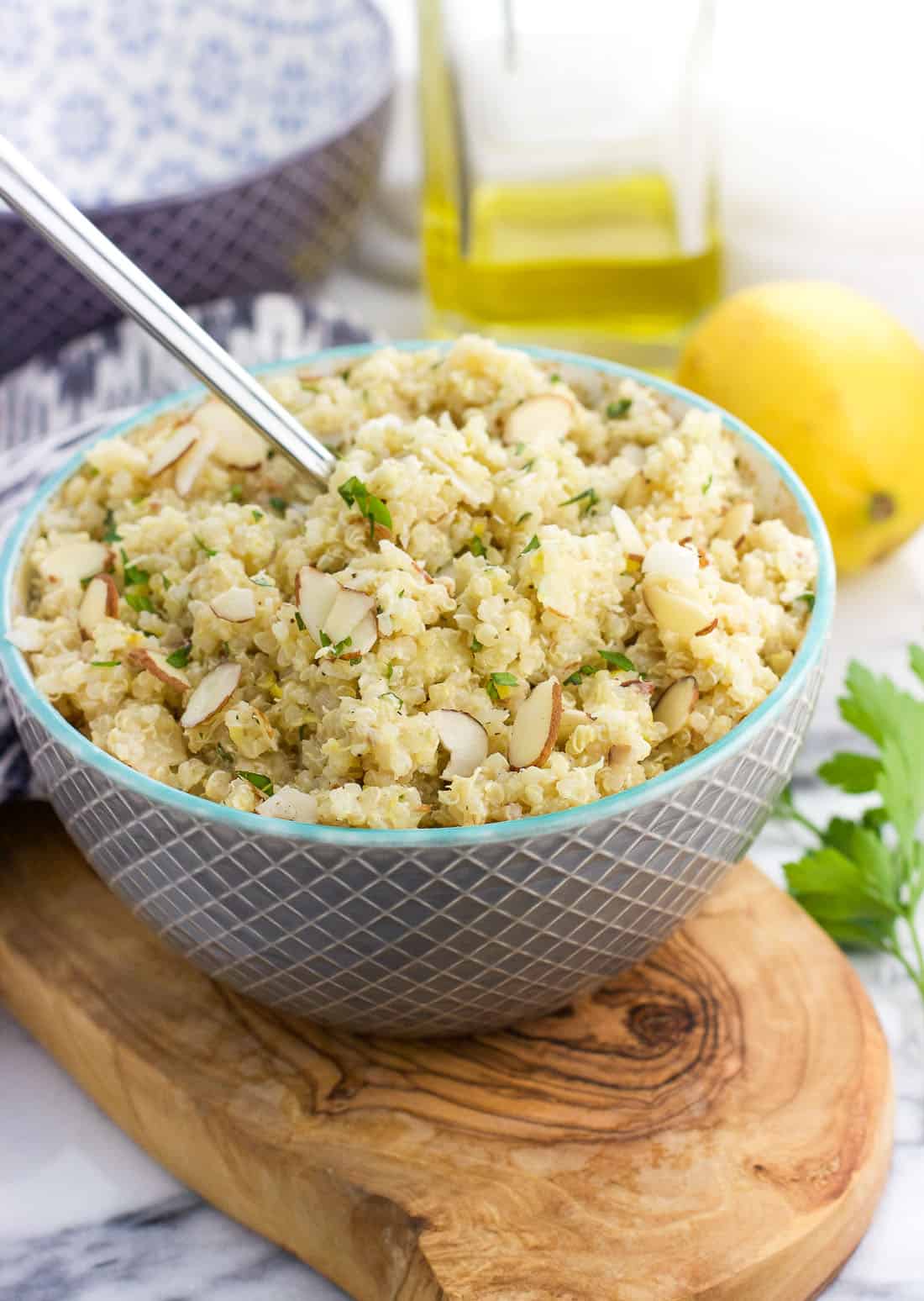 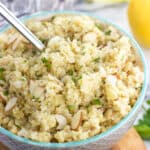 Lemons: The two lemons I used yielded approximately 1 1/2 tablespoons of zest and 1/3 cup of lemon juice.

This post was originally published in August 2014. The photos were updated in June 2018.

Liking the flavors in this lemon herb quinoa salad?

Then check out another oldie but goodie recipe – lemon chicken quinoa soup with spinach. It’s a speedy soup recipe that uses leftover or rotisserie chicken. Healthy, too!