Pizza Rustica is a classic Italian Easter dish loaded with eggs, cheese, and a variety of meats. This savory pie features an easy homemade crust and is made in a springform pan for an impressive presentation. 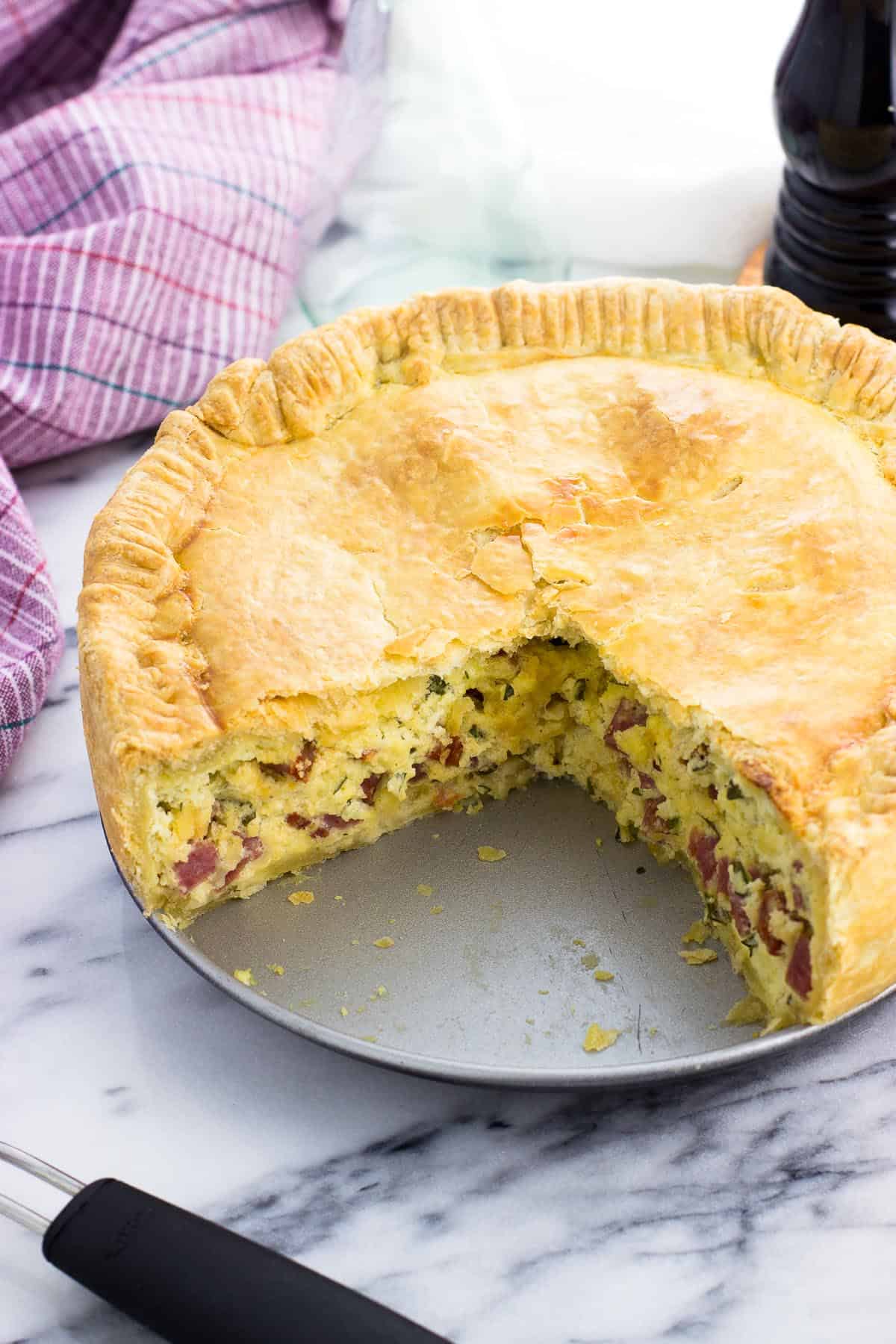 Better late than never, I’m finally getting around to sharing my family recipe for pizza rustica.

Every Easter for as long as I can remember, my mom has made, if you can even believe it, a larger version of this fully-loaded pie. She doubled pie crusts and loaded up on enough ingredients to fill a 9″ x 13″ dish in order to feel a large (and hungry) crowd. What looked like an obscene amount of food always had a knack for disappearing by the next day.

Nowadays with a much smaller crowd (or, like this year and last, no crowd at all) the “regular size” pizza rustica will do just fine. Actually more than fine given that it certainly doesn’t skimp on the servings!

What is pizza rustica?

Pizza Rustica, also known as Torta Pasqualina (“Easter Pie”) or Pizza Gaina, among other names, is a savory meat, cheese, and egg filled crusted pie traditionally served on Easter Sunday. Neapolitan in origin, this holiday dish is similar to a supersized quiche. It’s assembled in a 9″ springform pan to accommodate the extra height, and bakes up into quite a showstopper.

As with many Italian recipes, this isn’t the only way to make pizza rustica. The types of meat and cheeses used can vary, as can the sometimes addition of vegetables such as spinach. Just like in treats such as cucidati, everyone does it a little differently.

It was interesting to research other takes on something I’ve been eating all my life. No way is wrong — just don’t eat it on Good Friday like a large online food publication suggests if you’re abstaining from meat during Lent!

While this recipe is how my family makes it, I’ve noted below the different areas with wiggle room for you to make it your own. 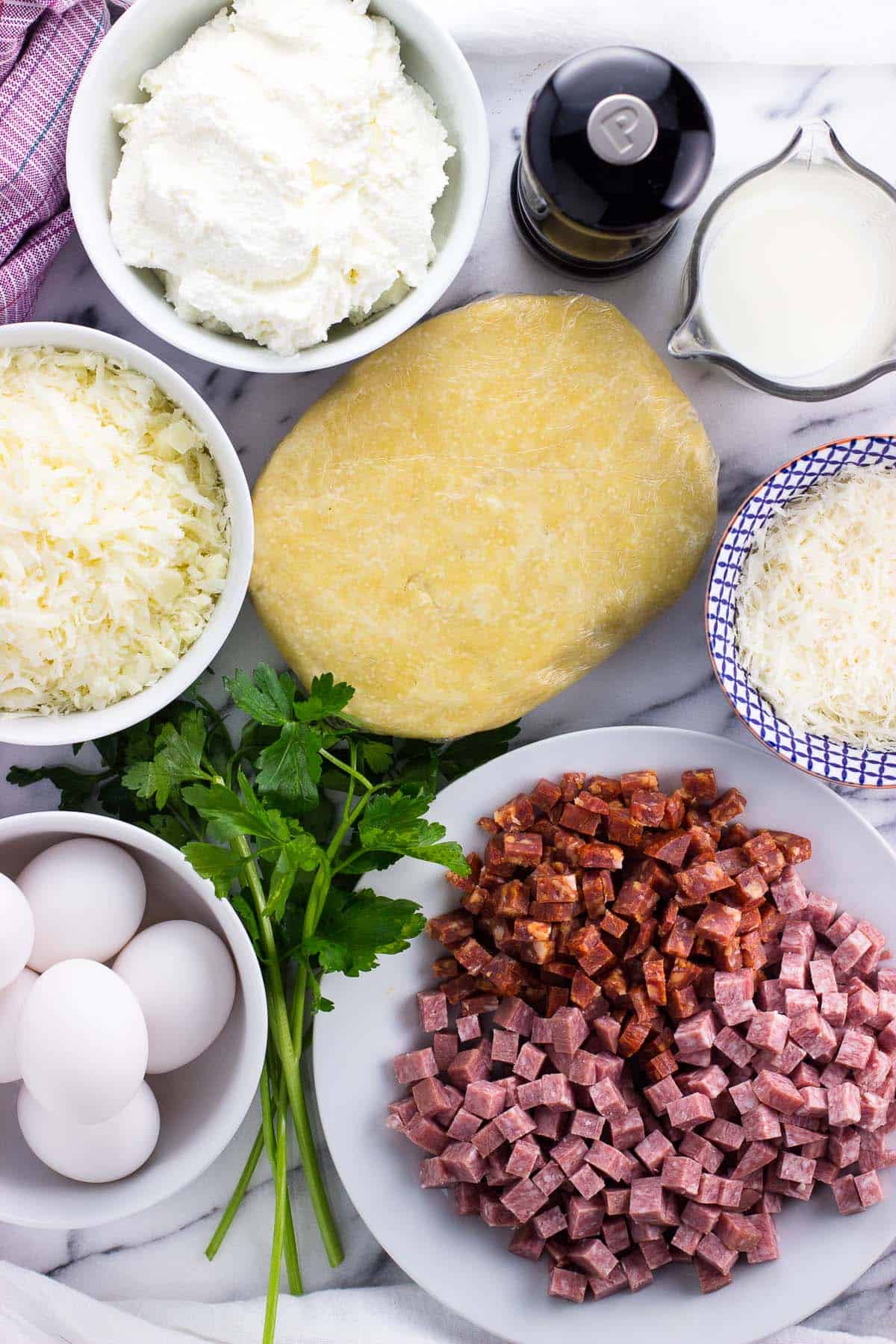 This crust recipe uses simple ingredients: all-purpose flour, unsalted butter, eggs, salt, and cold water. The butter brings a classic pie crust flakiness, while the eggs help produce a smooth and strong dough that can stand up to the hefty filling.

First whisk together the flour and salt, then cut in the small-cubed butter using a pastry blender or two forks. Aim for the butter pieces to get down to around the size of a pea or a pencil eraser, which is usually referred to as a coarse crumb consistency. That’s pictured on the left in the photo below.

Next form a well in the center of the flour mixture. Beat two eggs in a separate bowl and then pour them into the well. Using a fork or a spoon, start to stir and work the eggs into the crust mixture. It won’t come together into a ball yet, rather the egg will moisten everything and the crust will form larger pieces and begin to look a little shaggy. That’s on the right side of the photo below. 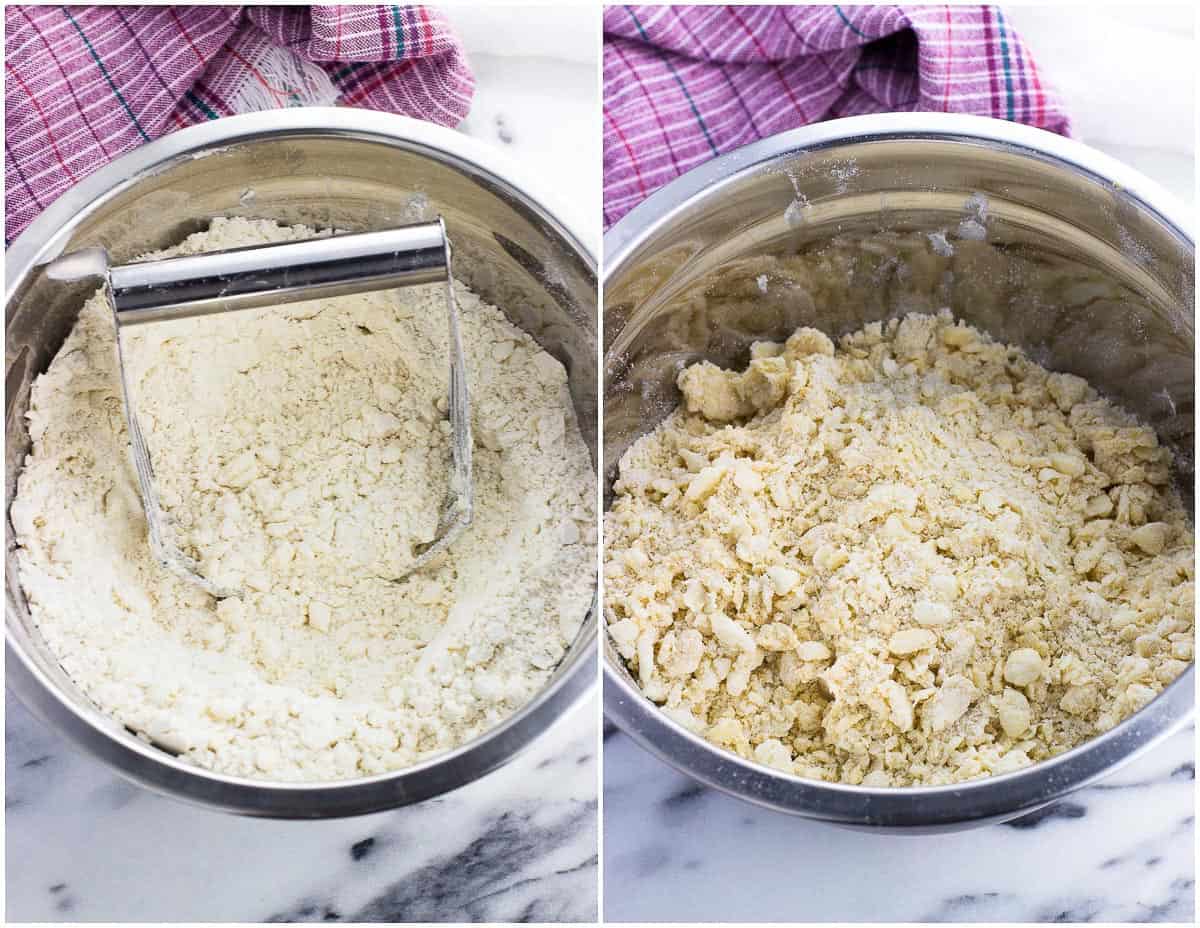 All that’s left is to mix in chilled water one tablespoon at a time until the dough can form a cohesive ball. You want to go slow here and add the water a little at a time as everyone’s conditions differ and may require less or more. Too little water and the dough will be dry and crumbly, while too much will lead to a sticky dough that’s difficult to handle.

I usually end up using somewhere between three and four tablespoons of water during this process.

The dough needs at least one hour to chill in the refrigerator to firm up, so press it into a flattened disc (this shape helps it chill more evenly vs. a big lump), wrap it in plastic wrap, then stick it in the fridge.

Towards the end of the dough chill time is a good time to begin the process of making the filling.

This filling is not for the faint of heart and unlike many of my recipes, doesn’t really have any room to be lightened up. It strongly leans into that once-a-year holiday comfort food title.

Eggs: You’ll need nine large eggs here. Six in the filling, two in the crust, and one for an egg wash. The eggs in the filling are separated, which helps produce a light and fluffy texture that isn’t too dense at all. And while I’m not a pie crust wizard by any stretch of the imagination, the eggs in the crust help form a cohesive, not-too-sticky dough that handles beautifully.

Cheeses: We have three! Ricotta, mozzarella, and Parmesan are all added to the pizza rustica filling. I use whole milk ricotta here as it’s creamier than part-skim and adds to the semi-luxe, special occasion food vibe. In place of Parmesan you can use Pecorino Romano or your preferred variety of hard Italian cheese you can grate.

Meats: Here is where a lot of variation comes into play. My family always uses salami for pizza rustica, though other versions include other meats. I’ve taken to including an equal mix of three salami products: hard salami, Genoa salami, and spicy sopressata. Twelve ounces of meat in total is recommended, so feel free to use just one or two salami varieties, or sub in portions of the following:

Everything else: My version of pizza rustica also includes one-half cup of milk to help lighten the texture, chopped fresh parsley, and ground black pepper. Notice that salt is not added here as the meats and cheeses provide enough. Plus there’s salt in the crust. 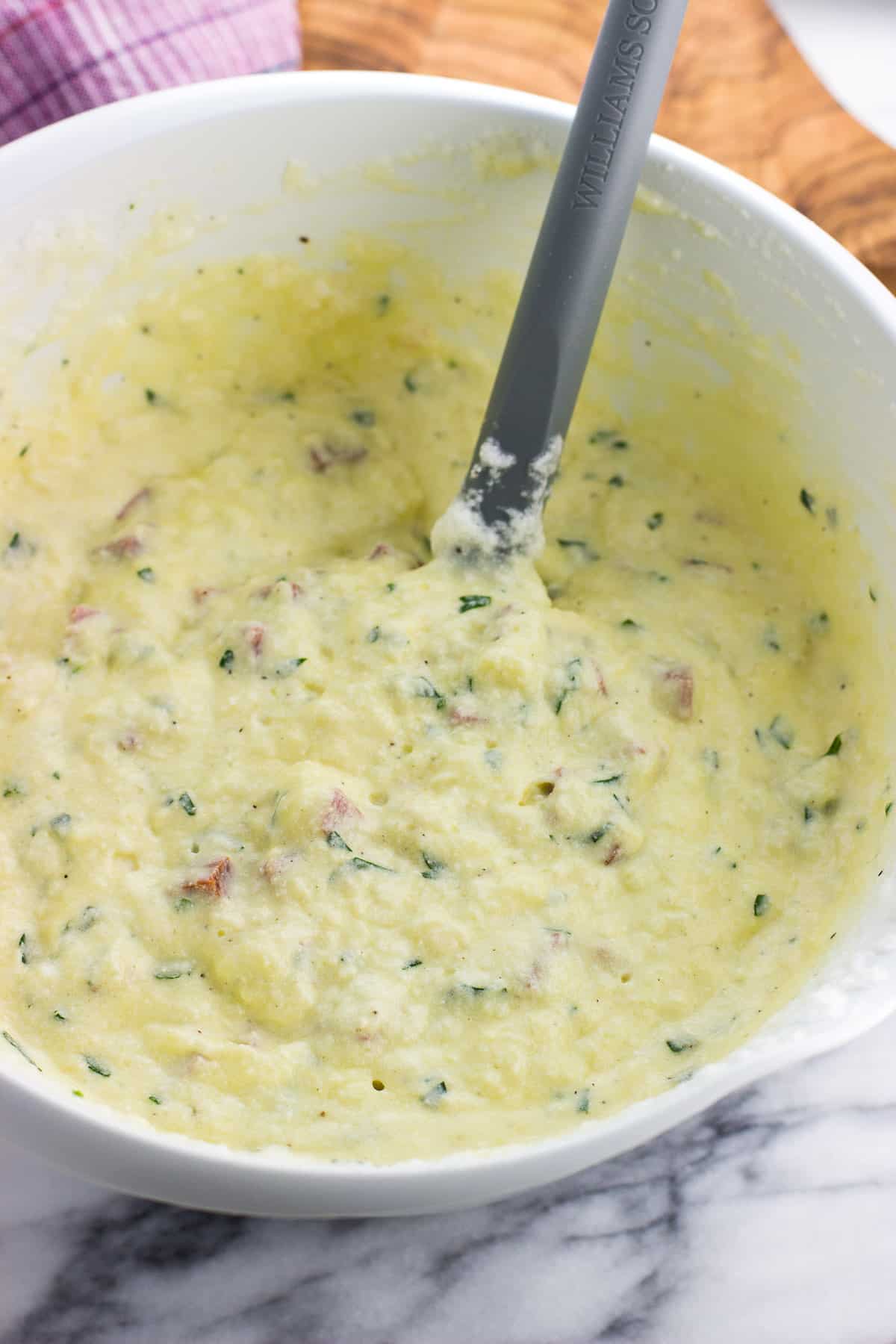 Something that sets this pizza rustica recipe apart from others out there is separating the eggs. You’ll mix the yolks with the rest of the ingredients, while the whites are reserved in a separate bowl.

Use a big mixing bowl for the yolks as all of the filling ingredients will end up in there. Add the ricotta, shredded mozzarella, milk, Parmesan, parsley, and pepper and mix everything well. Then stir in the cubed meat.

Now, using a stand mixer (or ideally any kind of electric mixer), whip the egg whites until stiff peaks form. This stage is reached when you lift out the beaters and the egg whites stand up. Fold the whites into the bowl with the rest of the filling ingredients.

While separating the eggs is more work, this step really helps to create a fluffy filling consistency that ends up lighter in texture than you might think possible given these ingredients. I wouldn’t skip it. 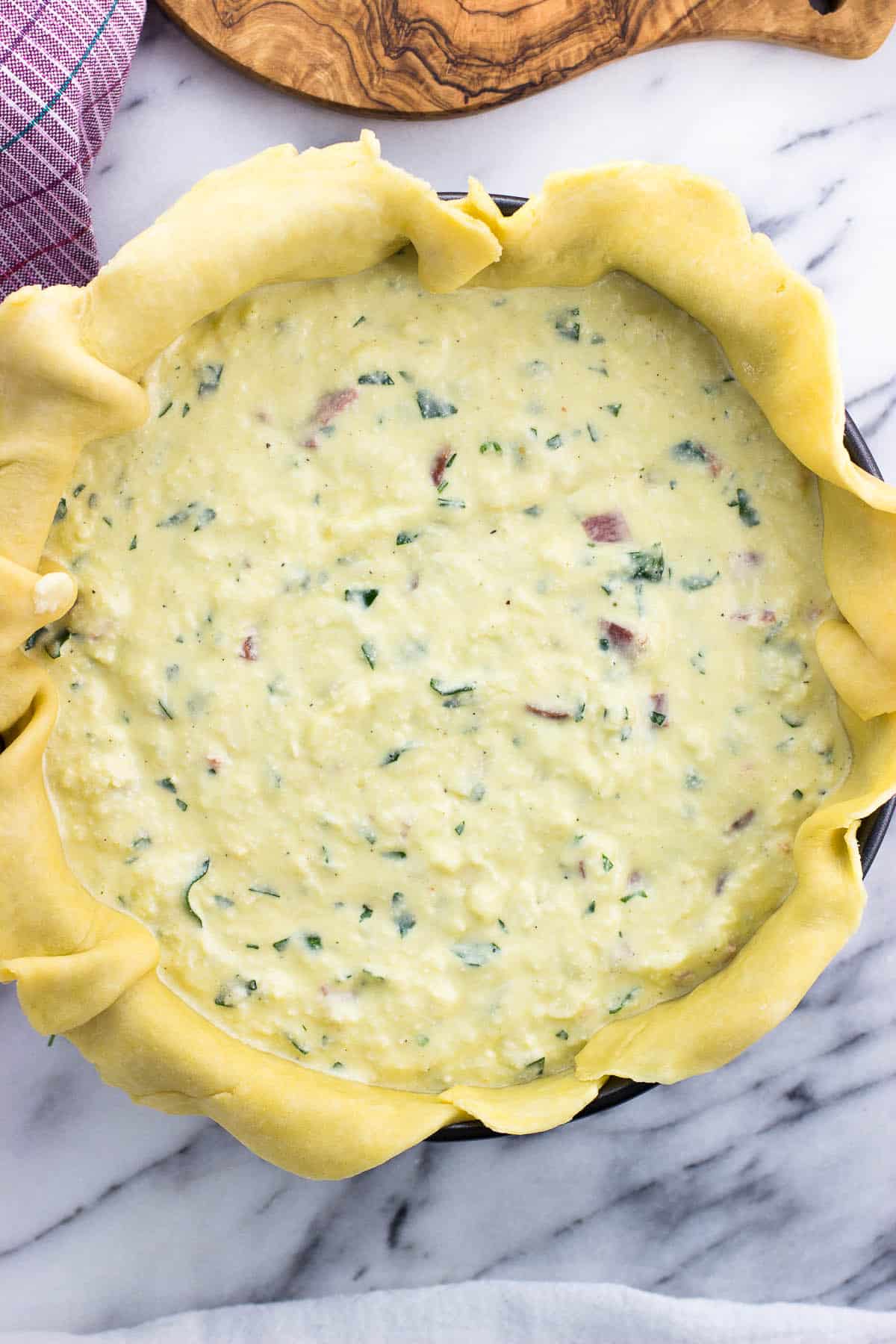 Once the dough is chilled, slice it into two portions: a larger one about two-thirds of the total, and a remaining one-third. Working with the larger piece first, roll it out onto a lightly floured work surface until it reaches about between 15 – 16 inches in diameter and one-eighth inch thickness. You shouldn’t need too much flour as the dough isn’t very sticky at all and the eggs give it a strong stretchiness.

Lay the dough gently over the greased springform pan, trying not to stretch it, and gently press it flat along the bottoms and sides, leaving a few inches of overhang. Pour in the filling, then roll out the second piece of dough into a 9 to 10 inch circle. Lay this on top of the filling, then fold in the overhang dough pieces and press to join the two pieces.

Crimp the crust by pressing the tines of a fork into it, then slice a few slits into the top crust.

If all that isn’t enough, we need to use one more egg for the egg wash. Beat it in a bowl with two teaspoons of water, then brush it onto the entire top surface of the pizza rustica. This will help the crust turn nice and golden brown.

And there you have it. Bake it for an hour (or longer) until the pizza rustica is a deep golden to golden brown color. 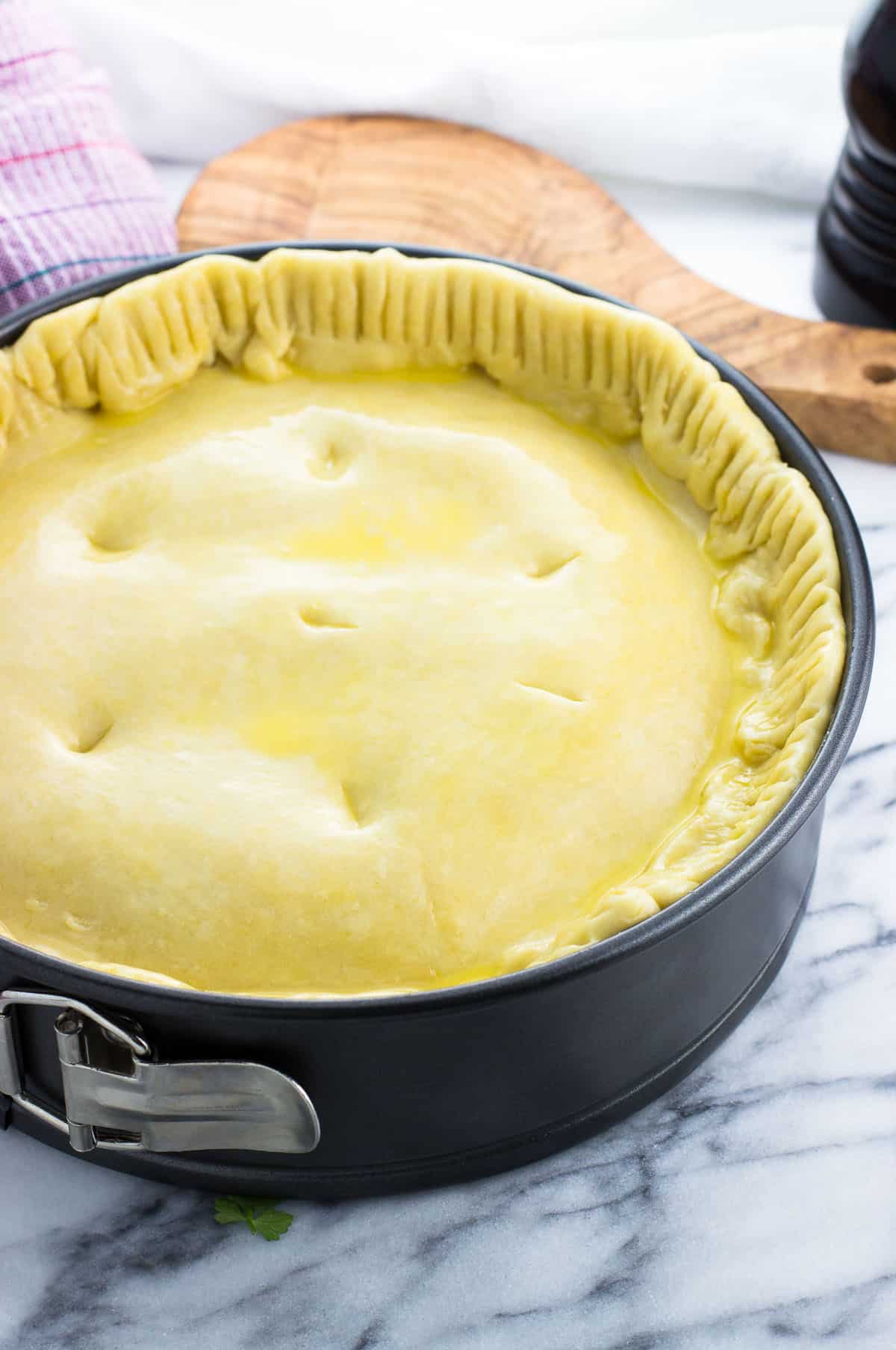 After smelling the aroma of the pizza rustica baking for so long, it will likely be hard to resist the temptation to dig into it right away. Please don’t do that! Slicing into it when it’s too warm will cause the filling, even when fully cooked, to mush out in a sloppy way. It needs a serious cool time in order to solidify and firm up to produce even slices.

I recommend allowing the pizza rustica to cool for at least 45 minutes before slicing into it. The good news about a dish like this is that it’s wonderful served warm or at room temperature. You can place it in the refrigerator for a bit to speed up this process without it becoming too cool.

Since this recipe isn’t exactly quick and easy to make the morning of a holiday, you can assemble and fully bake this pizza rustica the day before, leaving it whole to solidify fully. On the day of, place it in the oven to heat thoroughly, tenting the top with aluminum foil to prevent it from browning further. 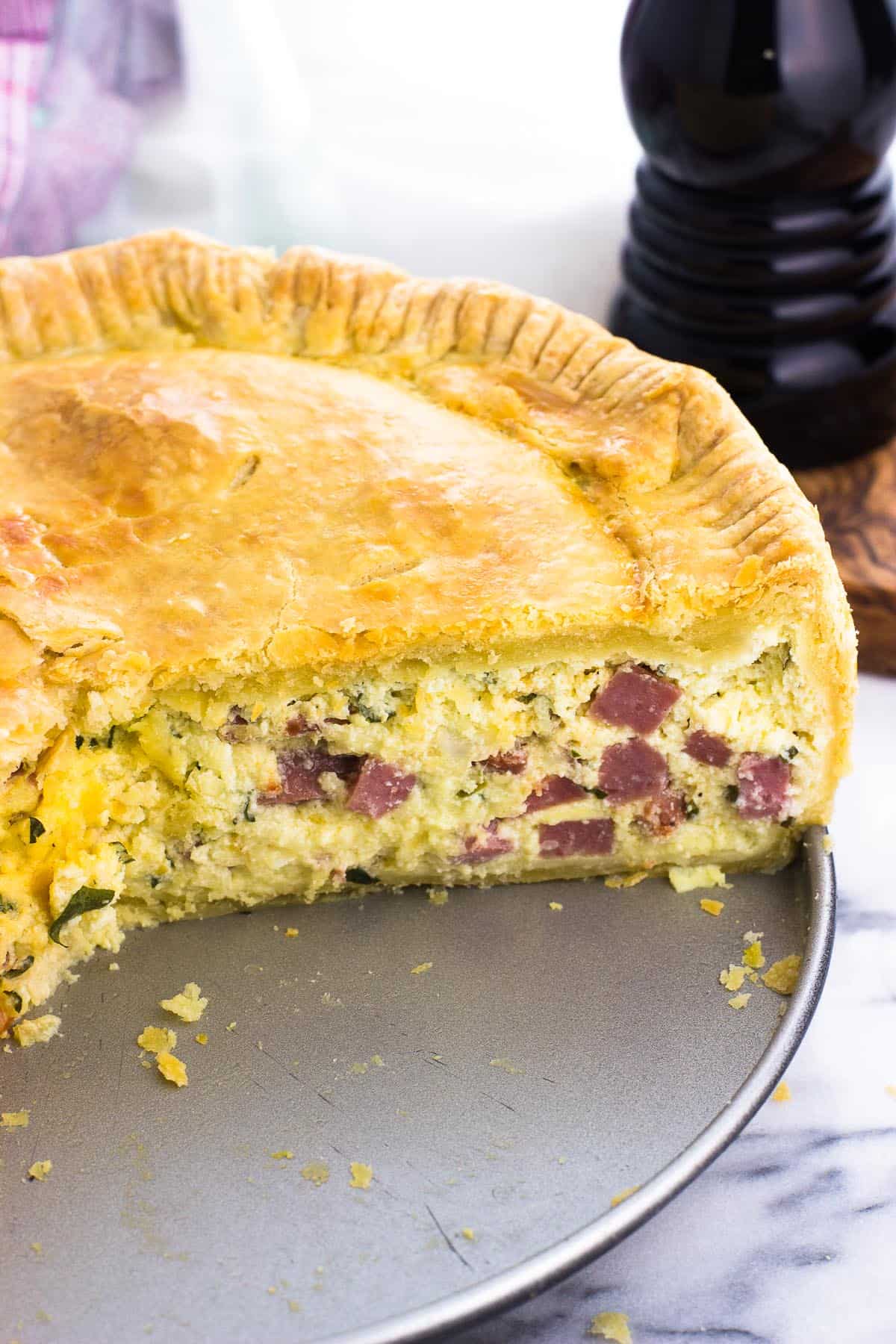 While struffoli is a big time Christmas dessert, many families also make a batch to enjoy around Easter. This recipe turns simple ingredients into a honey-kissed treat.

Anise cookies are a classic! This recipe features a present-but-not-overwhelming anise flavor that adds a special touch to a dessert tray.

While they look similar to anise cookies, these ricotta cookies taste completely different. Soft and tender from the ricotta cheese, these cookies feature bright lemon and almond flavors that help usher in springtime in the best way. 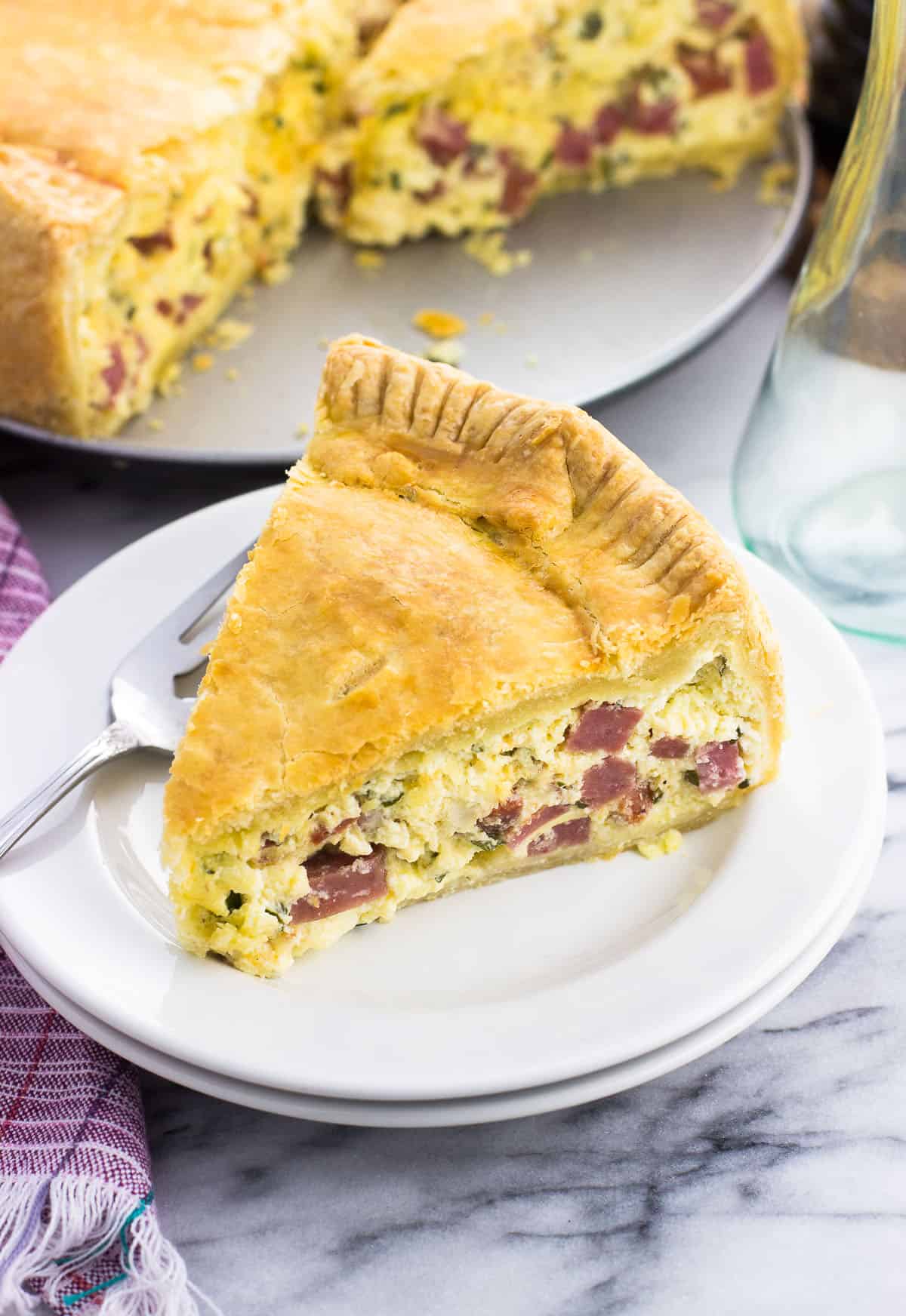 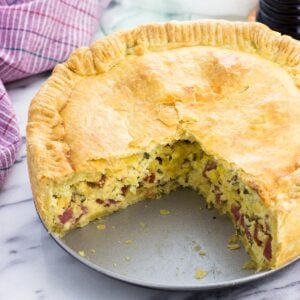 Chill/Rest time: This includes one hour for the dough to chill and 45 minutes for the pizza rustica to cool. It's very important to let the pizza rustica cool for least 45 minutes after coming out of the oven to help firm up the filling and produce clean slices. If you slice it when it's too hot, you're likely to get a fully cooked but loose mess. Meat: You don't have to use all three varieties of salami. You can use one or two, or sub in other meats such as cooked and crumbled Italian sausage, pepperoni, prosciutto, etc. Try and end up with twelve ounces of meat in total.