You are here: Home / How-To / How to Toast Coconut
JUMP TO RECIPE

Learn how to toast coconut in the oven or on the stovetop with these easy methods. Toasted coconut elevates any coconut dessert with only a few minutes of work! 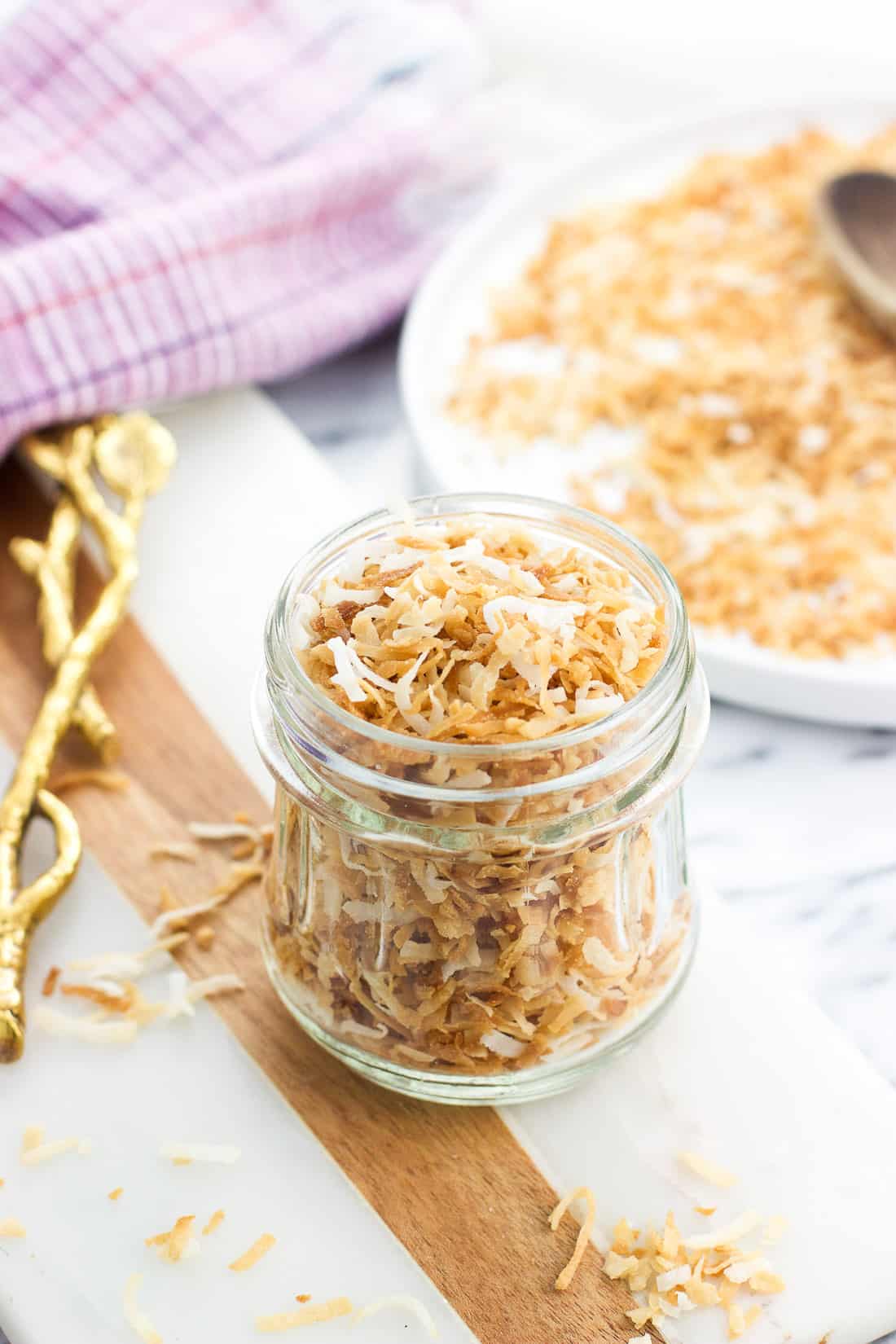 It’s the end of a crazy weather week here in middle Tennessee. Yesterday it was legitimately 78°F outside, and today it’s below freezing. To preface that two nights ago I sat in my bathtub for a little bit while the tornado sirens went off. This northern girl cannot hang with tornado warnings. Yikes.

So! Let’s keep things simple today and talk about how to toast coconut.

You need just one ingredient (coconut…) and an oven or a stovetop. While flaked coconut is delicious in its own right, toasting it brings out those tropical coconut flavors even more and makes a decadent addition to dessert recipes. Plus it’ll make your kitchen smell amazing as it toasts. Can’t beat that, right?

Should I use sweetened or unsweetened coconut flakes?

For starters, let’s start with what type of coconut flakes to use when toasted coconut. The short answer is either work! The (obvious) difference between the two is that sweetened, aka “snowflake” coconut has added sugar, while my bag of store-brand unsweetened coconut lists just coconut as an ingredient.

My general rule of thumb is that I use unsweetened coconut when I’m making savory coconut dishes such as double dipped baked coconut chicken tenders or coconut macadamia crusted salmon. It delivers a whole bunch of coconut flavor without extra sweetness that might not mesh well with a main dish.

Since in both of those recipes the unsweetened coconut “toasts” with other ingredients as part of the recipe, there isn’t often a need to toast it ahead of time. Though you could if you wanted to use it as part of a dessert or garnish.

While there are some exceptions, sweetened coconut flakes are allllll about dessert in my world, and those I love toasting ahead of time. 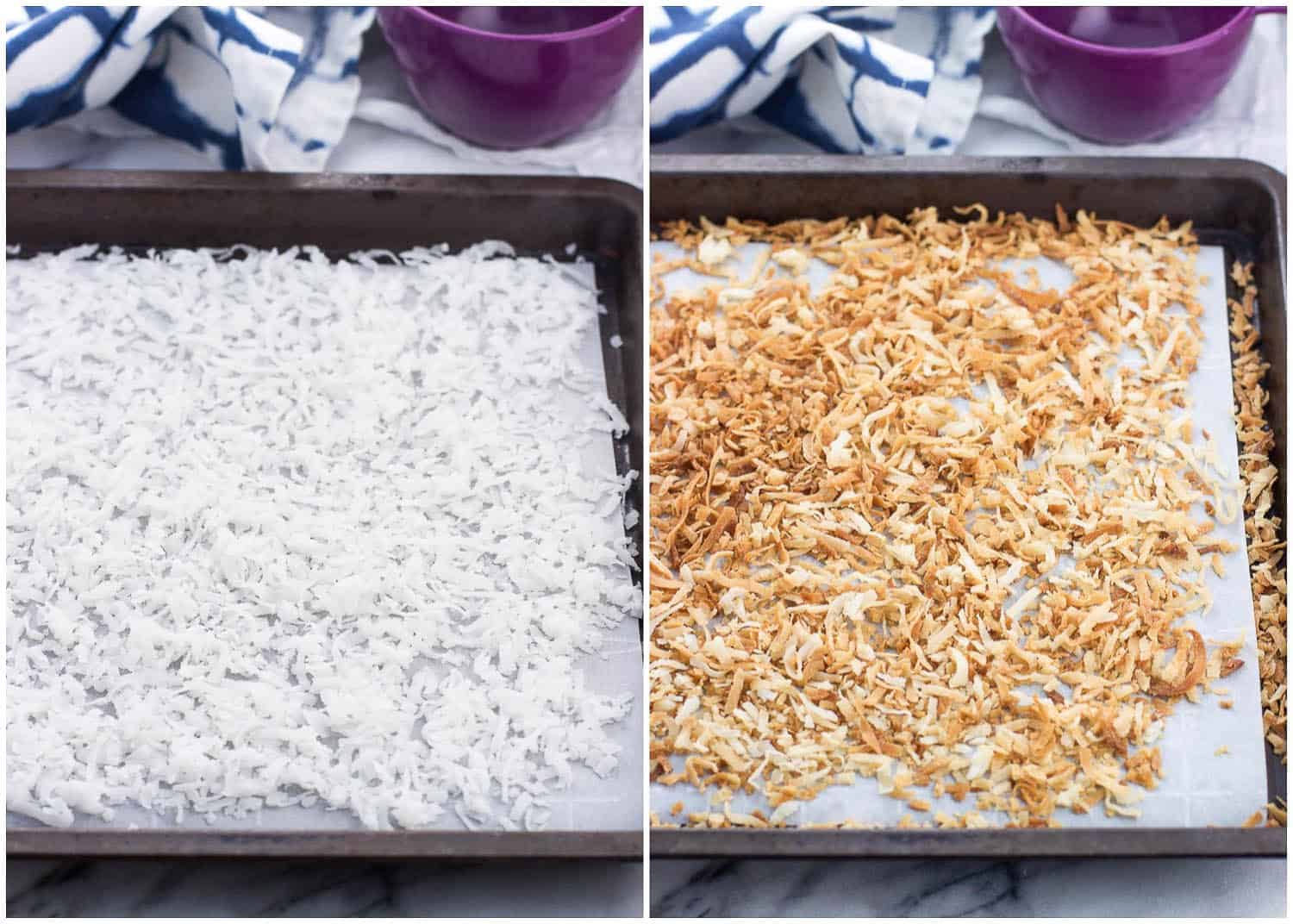 If I had to choose, I prefer toasting coconut in the oven. While I shake the pan up once or twice as it’s toasting, I find it’s a bit more hands-off than toasting coconut on the stovetop, which requires more stirring.

Simply arrange flaked coconut in an even layer on a rimmed sheet pan and place in the center rack of an oven heated to 350°F. Toast for 5-7 minutes (or to your liking), shaking the pan up a few times to help the coconut toast evenly. That’s it!

I like to line the pan with parchment paper so I can pick up the parchment ends and easily funnel the toasted coconut into a bowl or onto a plate without spilling.

What you see is one cup of coconut flakes which fits nicely on a 9″ x 13″ rimmed sheet pan. If toasting more than one cup of flaked coconut, you’ll want to use a larger pan as needed to accommodate everything in a reasonably single layer. 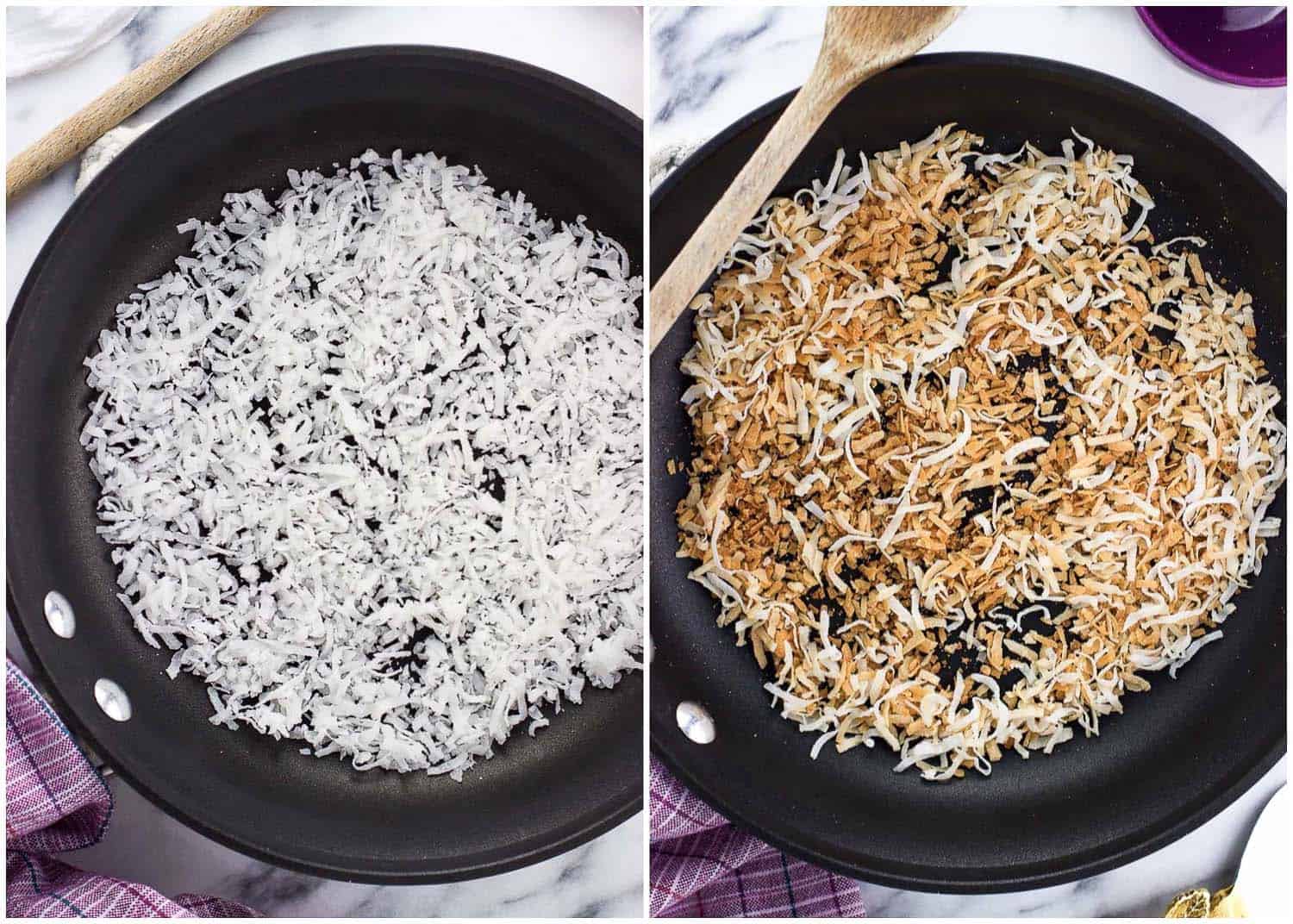 Arrange flaked coconut in an even layer in an ungreased skillet set over low-medium heat. Stir up the coconut frequently as it toasts as to prevent burning. Same deal as toasting it in the oven – remove it from the hot pan right away once it’s toasted to prevent it from getting too toasty.

**With either method, keep a close eye on the coconut as it’s toasting. This isn’t a recipe where you can walk away and start doing something else. The coconut can go from being nice and toasty to being burnt very quickly.**

Store toasted coconut in an air-tight bag, container, or jar. It doesn’t need to be refrigerated. In fact, I keep a sealable plastic bag of it right in my baking cabinet ready for use. Or snacking. 😉 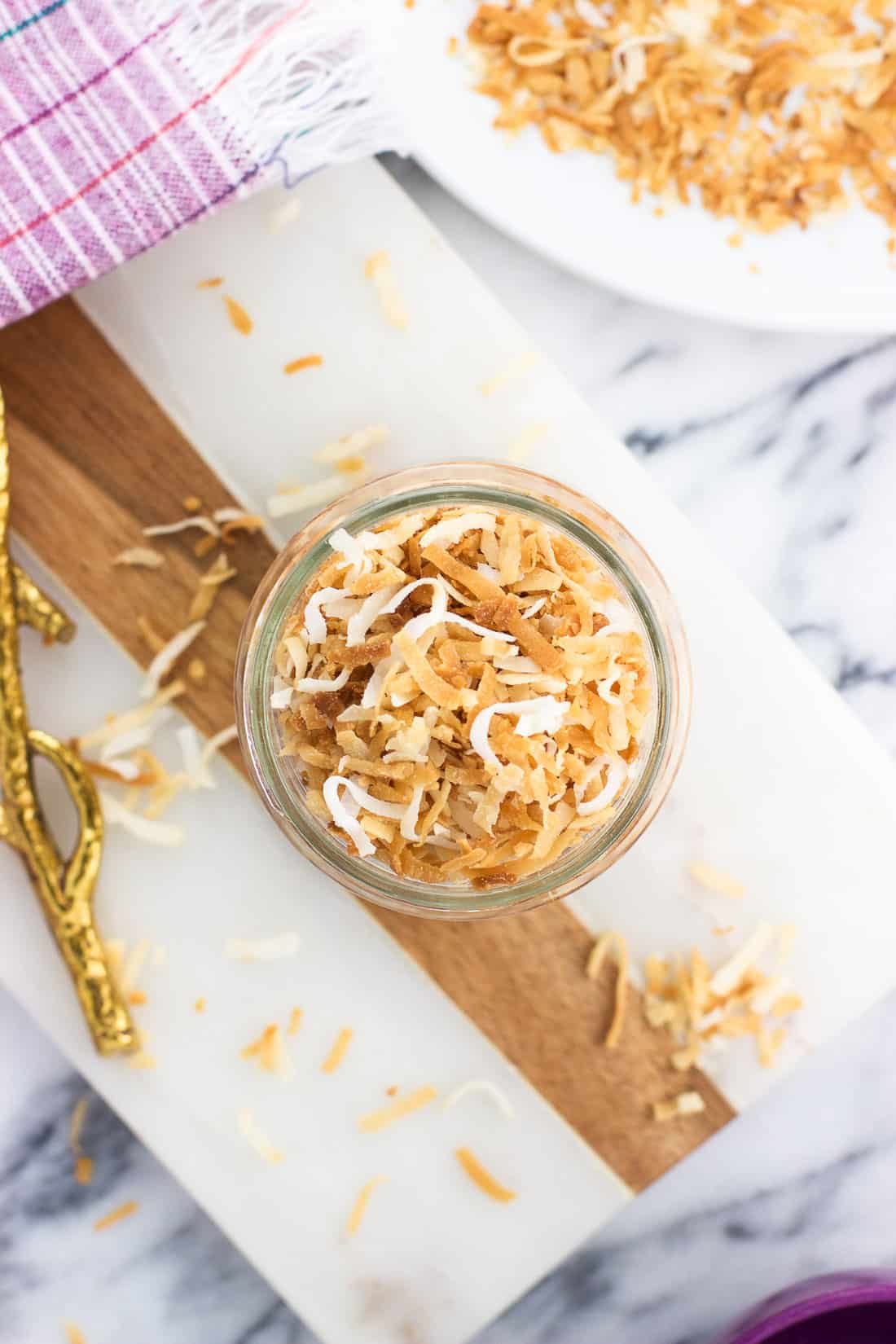 Now that your coconut is toasted, let’s put it to use!

Chewy toasted coconut cookies use just one bowl and have a subtle almond flavor that pairs so well with coconut! 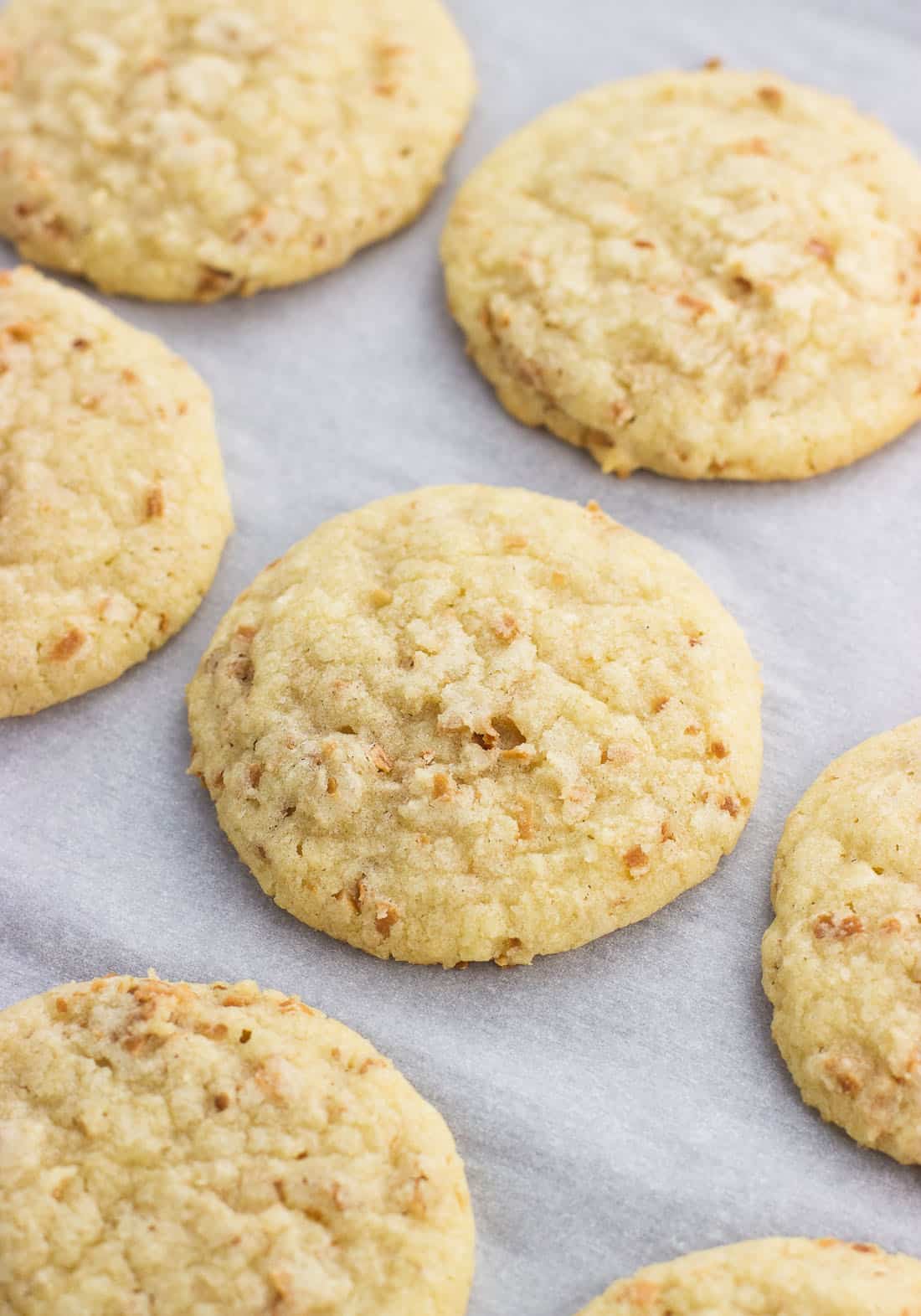 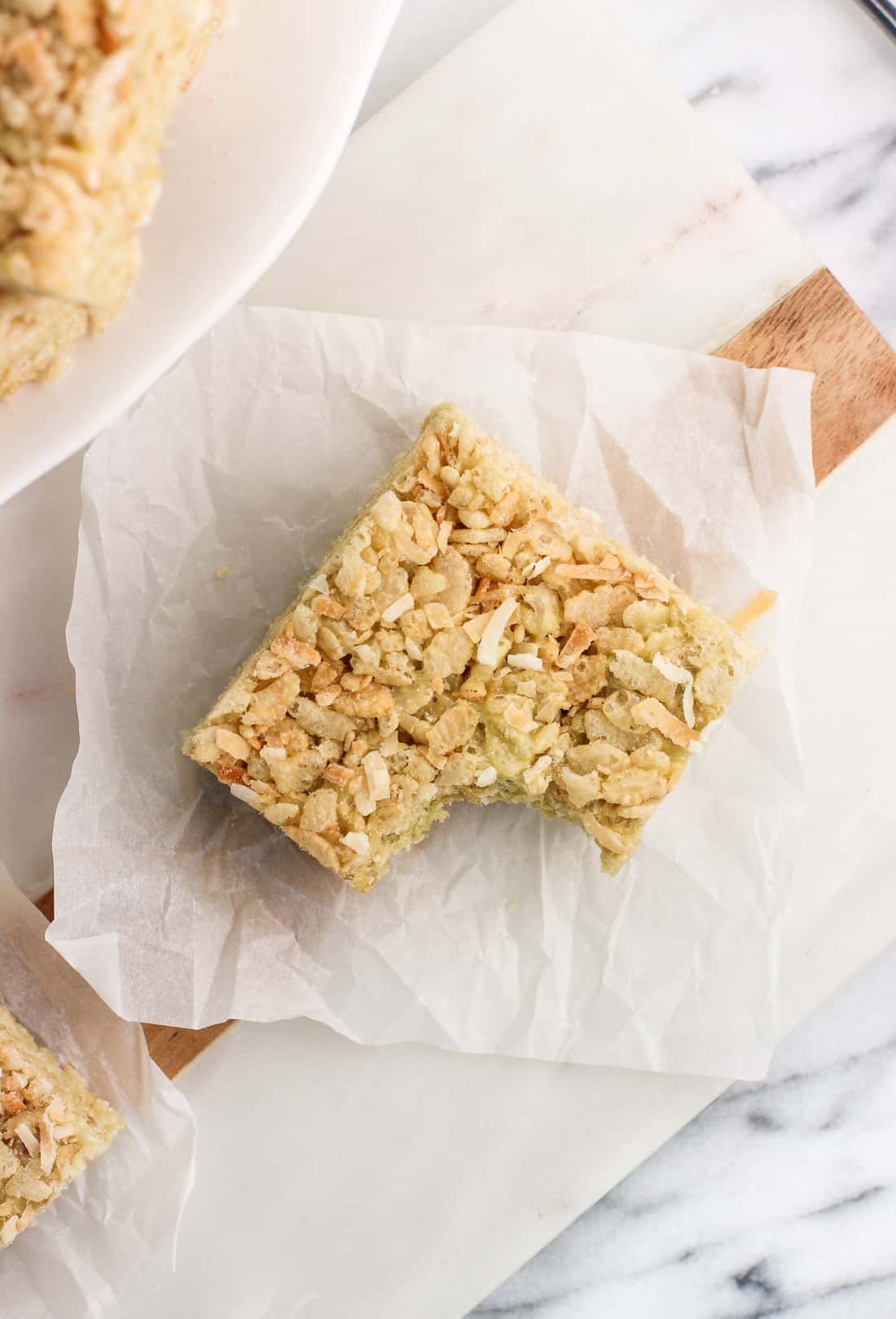 Have you ever grilled dessert? This semi-homemade recipe for grilled angel food cake with pineapple, coconut, and caramel is a summery treat. 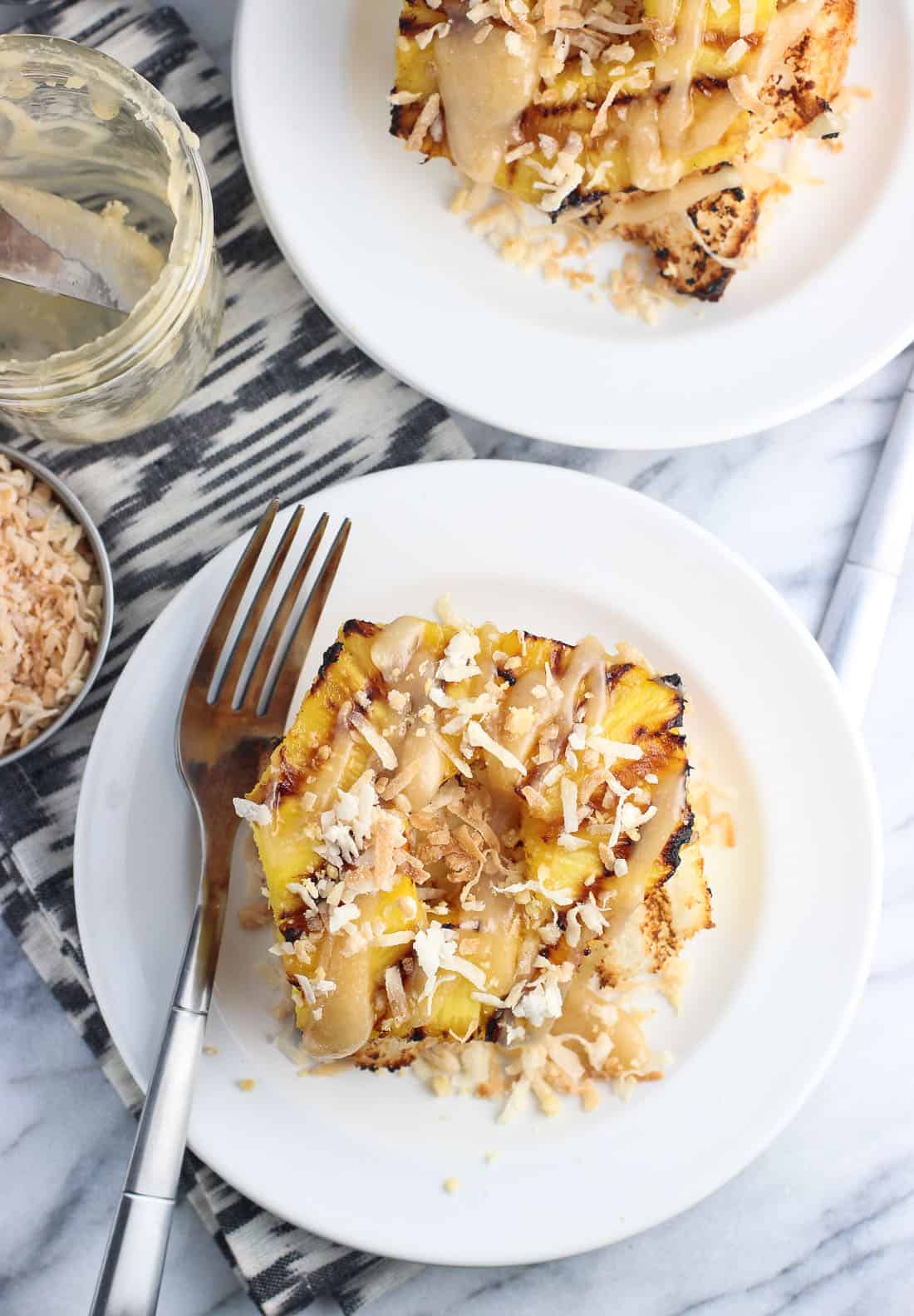 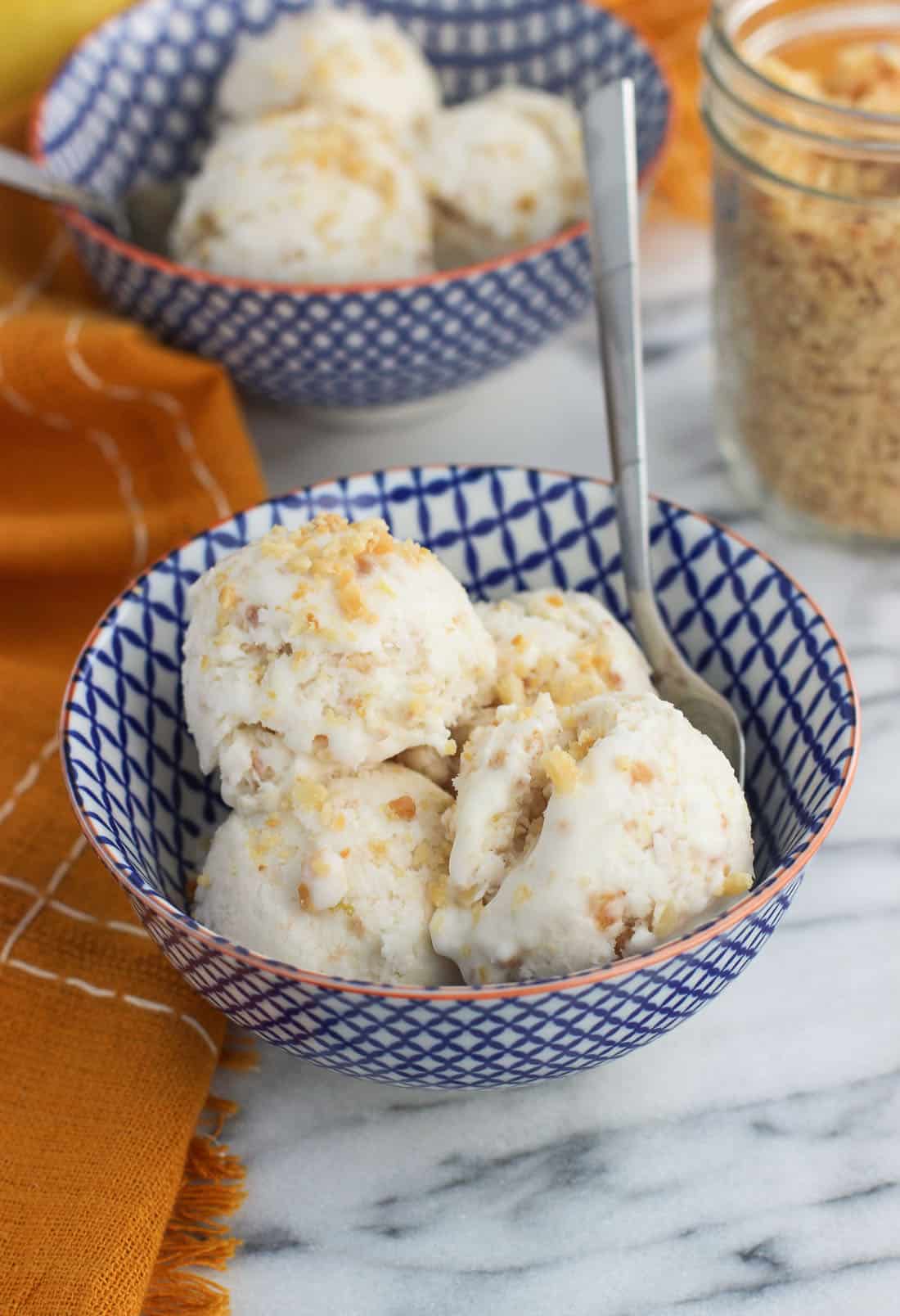 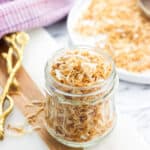 How to Toast Coconut

Important tip: With either method, keep a close eye on the coconut as it's toasting. It can become burnt quickly. One tell with oven toasting coconut is that it's almost done when it just becomes fragrant.  Storage: Store toasted coconut in an air-tight bag, container, or jar. Nutrition: Nutritional information shown is an estimate for a 2-tbsp serving of sweetened flaked coconut.