Creamy chicken and rice soup is a hearty soup recipe that uses brown rice and fresh spinach for a boost of nutrition. This healthier soup recipe (no cream!) has a wonderful spice to it and is so easy to make. 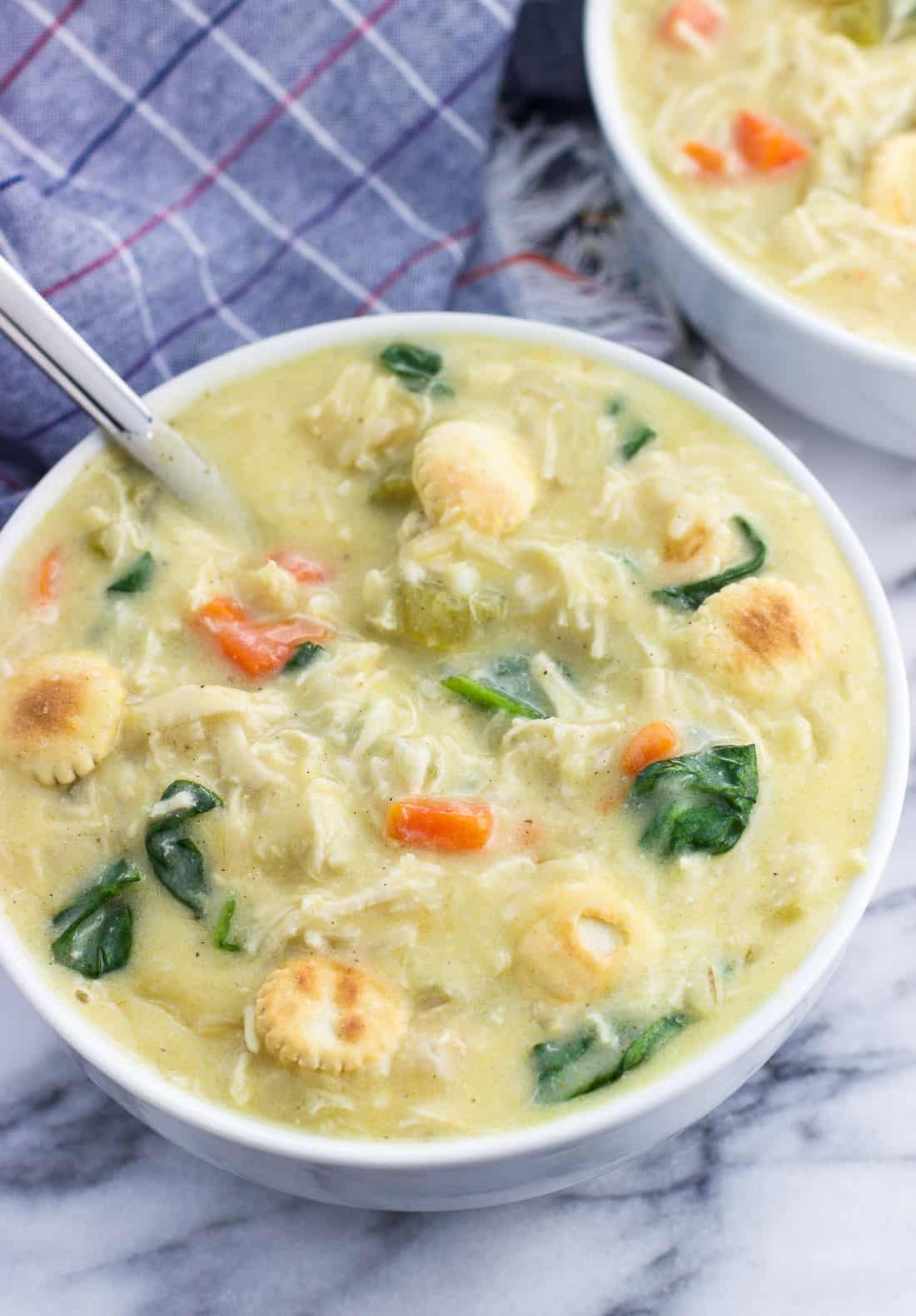 By my count this is the eleventh soup recipe on MSL (you can see them all in the soup tag). And while this winter certainly hasn’t been that cold here in the south, I think just about all of these have made it onto my dinner menu over the past few months.

Healthy potato leek soup with orzo is a great Meatless Monday/anytime vegetarian option, while easy chicken tortilla soup with rice is a favorite for using up shredded rotisserie chicken meat. 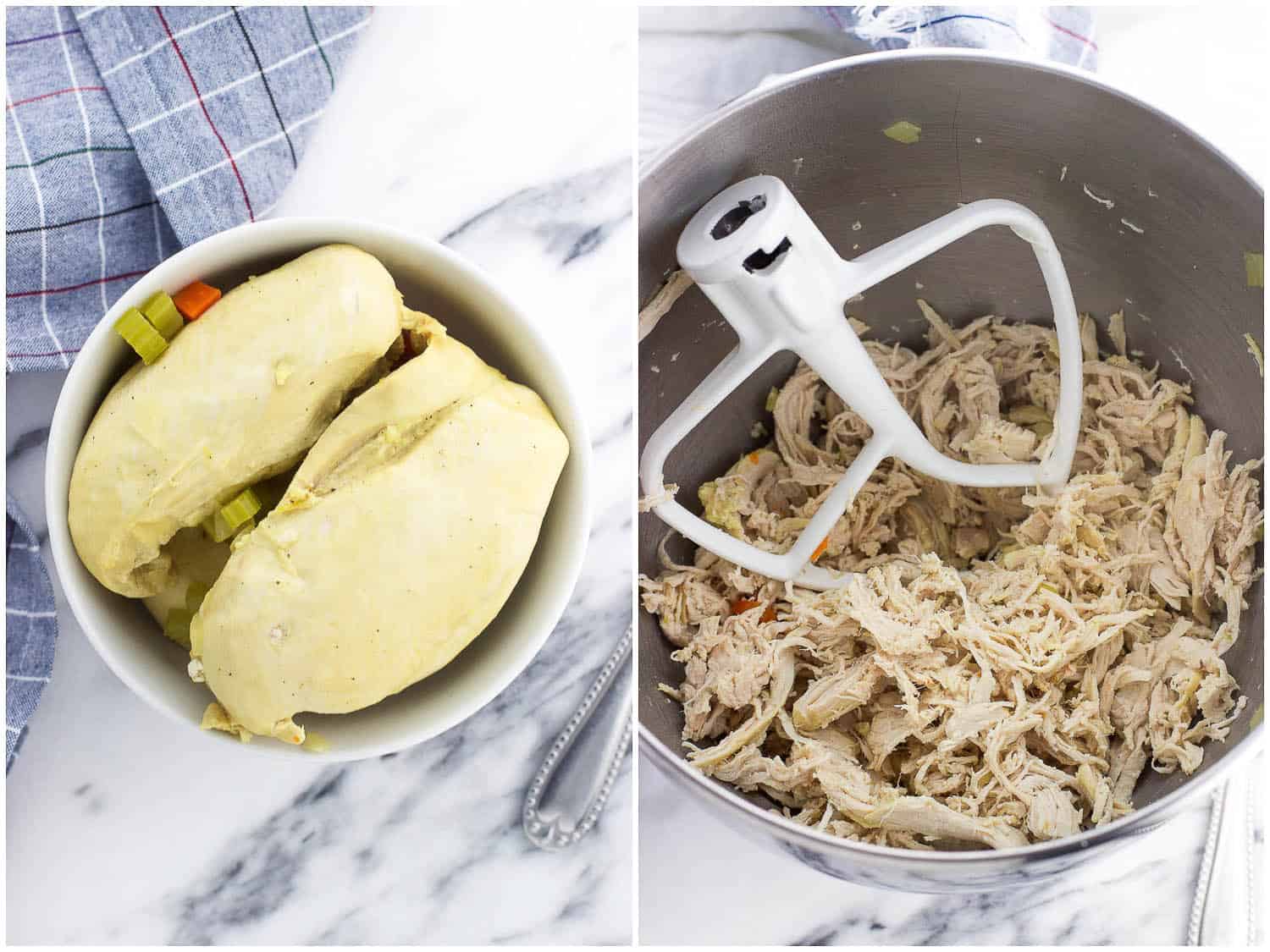 This recipe for creamy chicken and rice soup with spinach uses brown rice just like my chicken tortilla soup, but simplifies things by boiling the chicken right in the broth.

I’m not sure about where you are, but I can’t seem to go to the grocery store without running into a boneless skinless chicken breast BOGO. This creamy chicken rice soup is perfect for that! 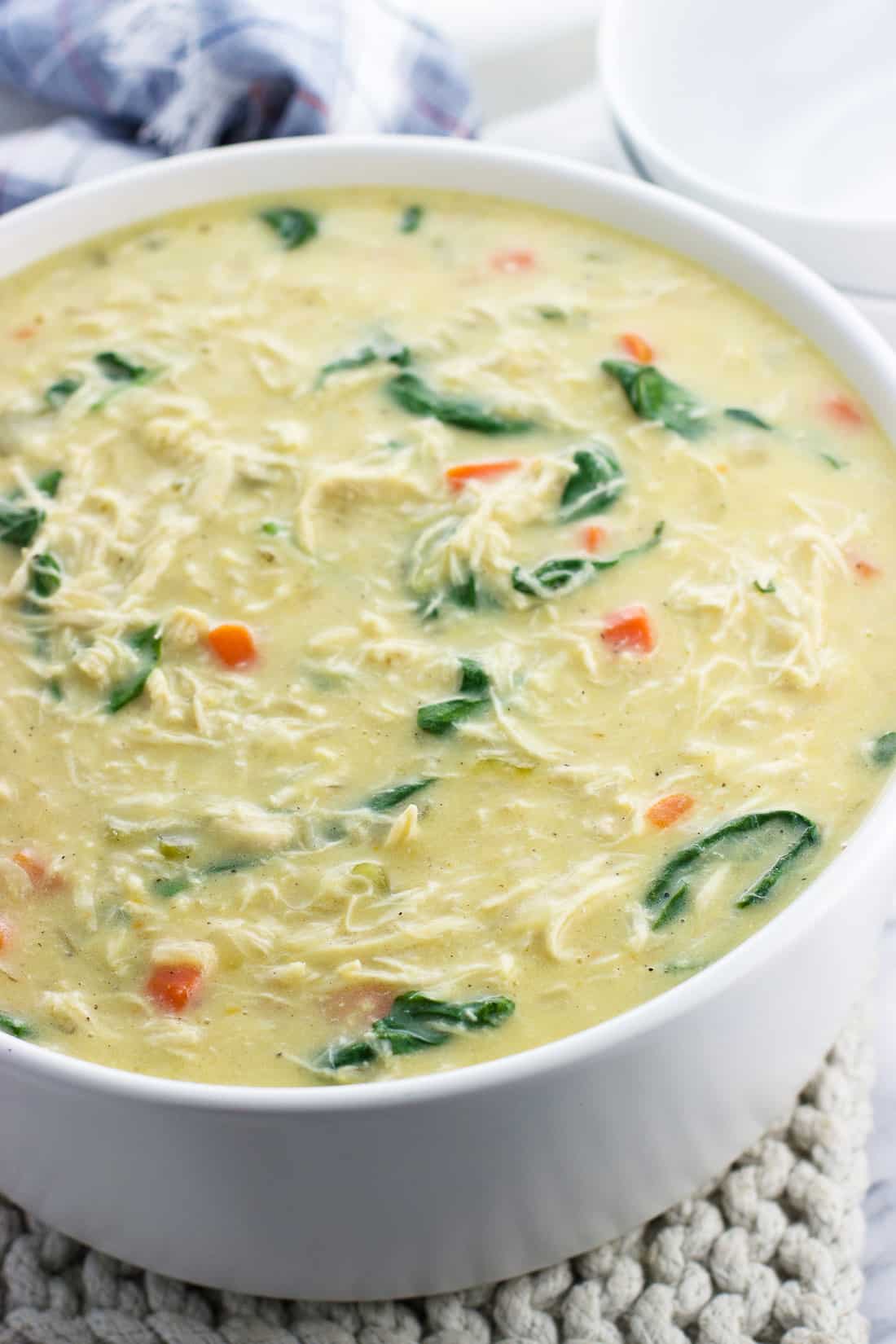 While none of the ingredients here are wild and crazy, there are a few that might be unexpected so let’s talk about those.

For starters: the seasonings. Curry powder and Old Bay! Not exactly a combo you see a lot, right?

My husband and I went to Antigua on our honeymoon and split a panini every afternoon as a snack. (This ties in and isn’t just an elongated food blogger diary entry, I promise). One afternoon’s panini was comprised of fish and a vaguely golden sauce. It wasn’t spicy at all, but was warm and…spiced? Spiced, not spicy.

I’m not selling it well but it was DELICIOUS. I never asked what spices they used so I was thinking about this sauce on the flight home (naturally) and a lightbulb went off…curry powder and Old Bay.

Clearly this wasn’t what they used, but I decided to play around with that spice blend until I do some digging in my Caribbean cookbooks. 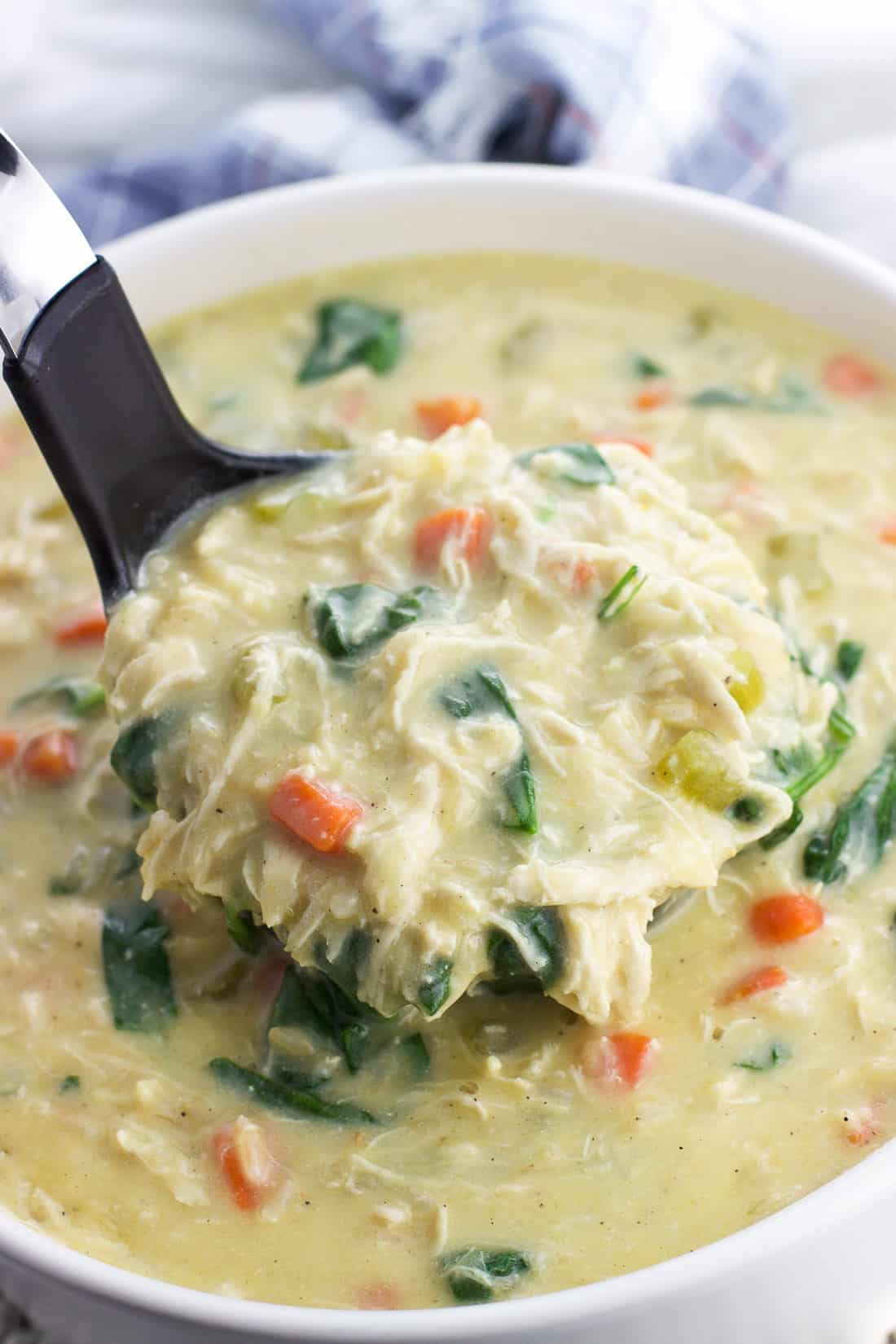 While an unlikely pairing, curry powder and Old Bay pair so well together. Seriously! They add a cozy, comfort food-like quality to a dish like creamy chicken and rice soup.

The ingredient quantities written into the recipe card below won’t overwhelm you, rather they exist in the background without hitting you over the head with curry or seafood/Old Bay flavor. Hence why I didn’t included the words “curried” or “Old Bay” in the recipe title.

I think this creamy chicken and rice soup recipe stands on its own in a classic way without any extra descriptors. 🙂 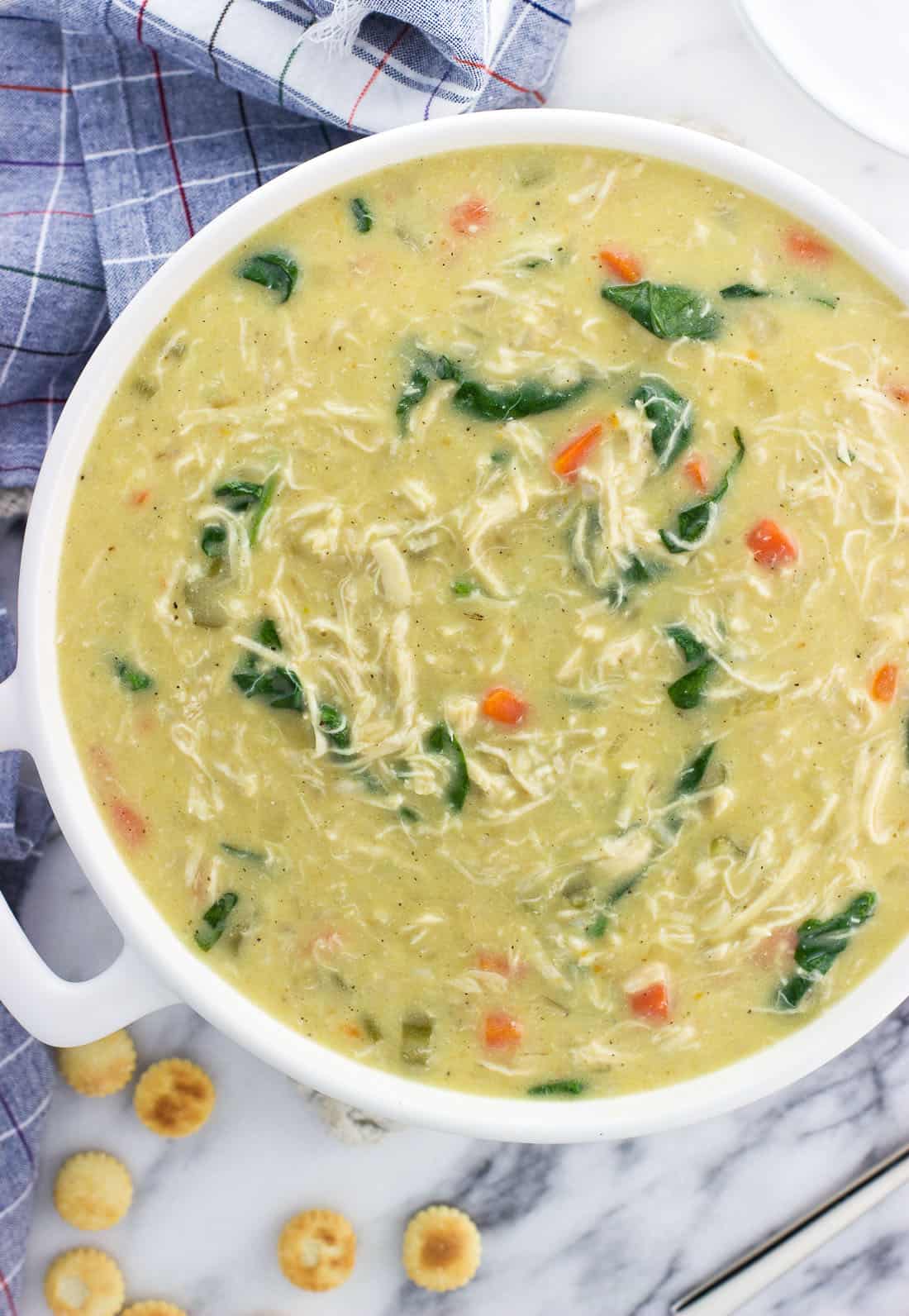 This soup recipe starts off traditionally with a mirepoix base, which is the fancy pants way to say we’re sauteeing onion, carrot, and celery.

Next come the garlic and seasonings: curry powder, Old Bay, salt, and pepper.

Then it’s time for the broth (I always use reduced-sodium for my chicken broth), then in go the raw boneless skinless chicken breasts.

Boil them until they’re fully cooked, with the center of the largest chicken breast reaching 165°F. This took around twenty minutes for me, though differing chicken breast sizes means it may take more/less time for you. Using an instant-read thermometer (affiliate link) makes life so much easier and takes the guesswork out of food safety. I highly recommend using one! 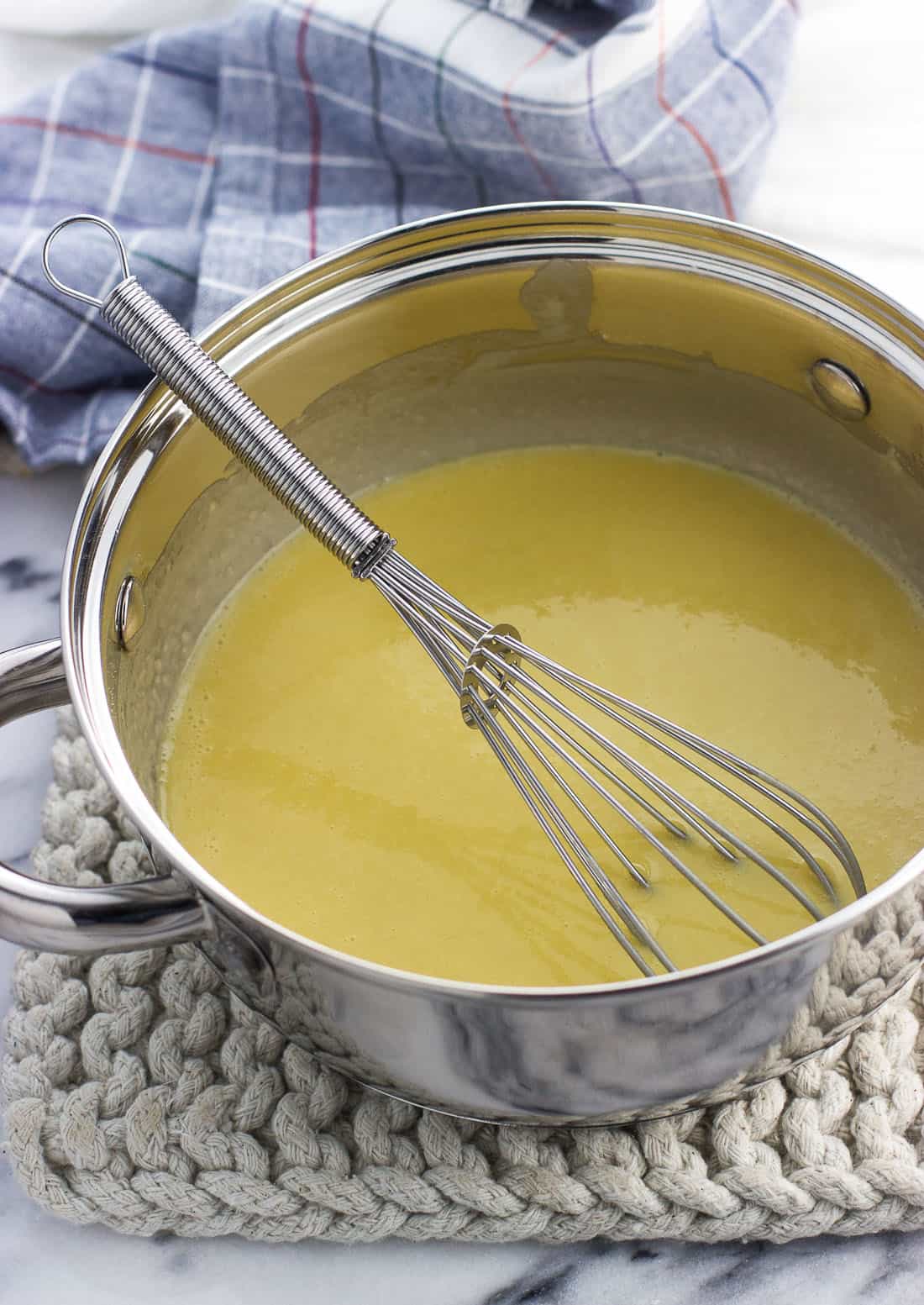 This next part is where the other somewhat unusual ingredient comes in. Since there isn’t any cream used here (just 2% milk), the silky smooth thickness comes from a roux (pictured above). 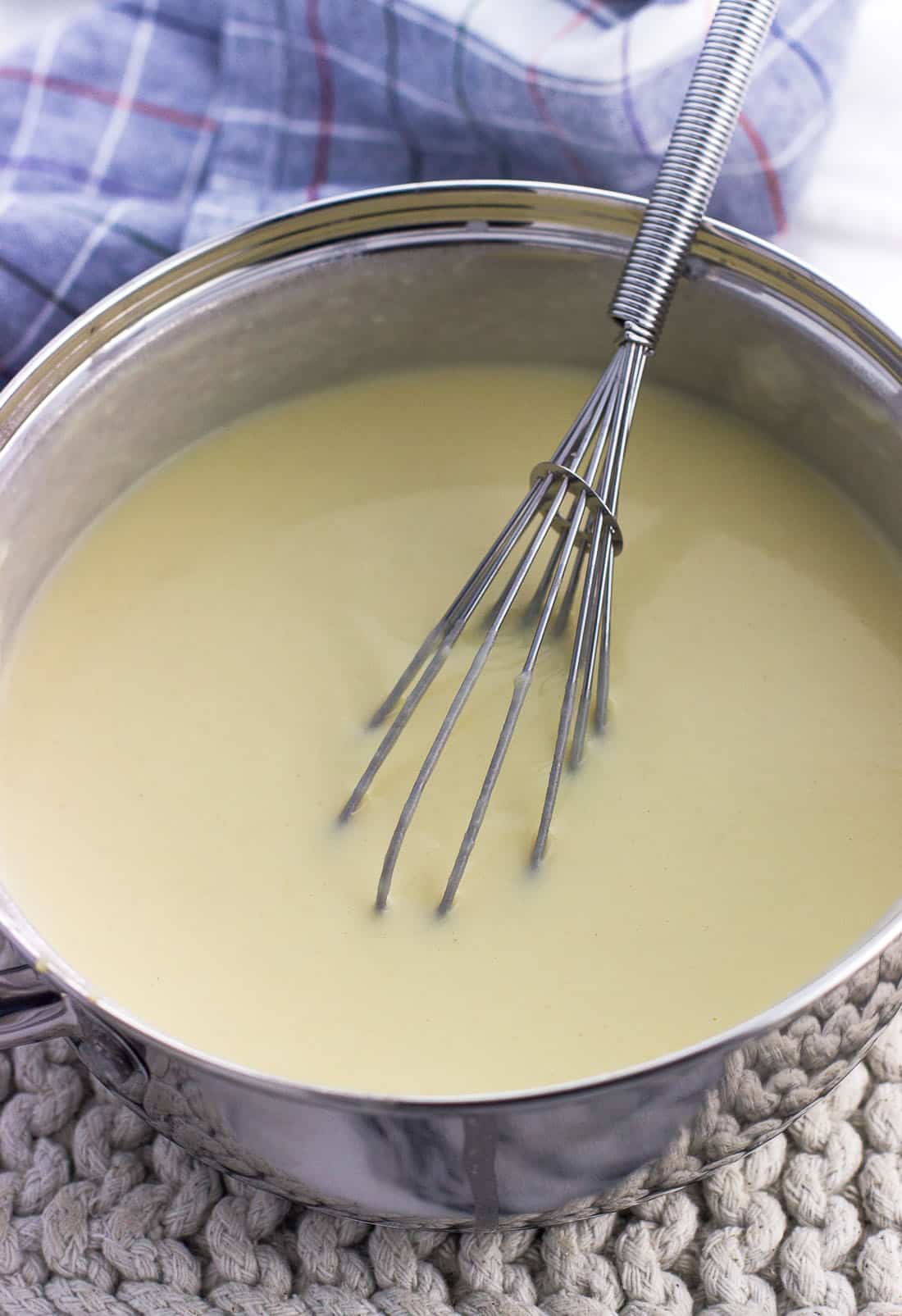 How to make a roux

Magic happens when equal amounts of fat and flour combine together. While I’ve used butter in the past for a roux, clarified butter (a.k.a. ghee) is my pick.

My trusty copy of Ratio by Michael Ruhlman (affiliate link) states that butter contains around 85% fat/15% water, while ghee is straight-up 100% fat. That means no adjustments are necessary to account for the water cooking off. Using an inexpensive digital kitchen scale here makes it super easy to measure equal amounts of ghee and flour by mass.

Scroll down to the recipe notes to see a blurb about subbing in butter if you don’t have ghee on hand.

Once the roux is thickened, slowly whisk in the milk. It might thicken substantially at first, but keep whisking and pouring and soon you’ll have a nicely thickened consistency. Aim for it to look like the light and creamy mixture pictured in the photo below.

Add this thickened milk mixture back to the soup pot along with the shredded chicken and cooked brown rice and allow everything to heat up a bit. Throw in fresh spinach leaves just prior to serving for them to wilt and there you have it. Warmly seasoned, slightly better-for-you comfort food you in a bowl. 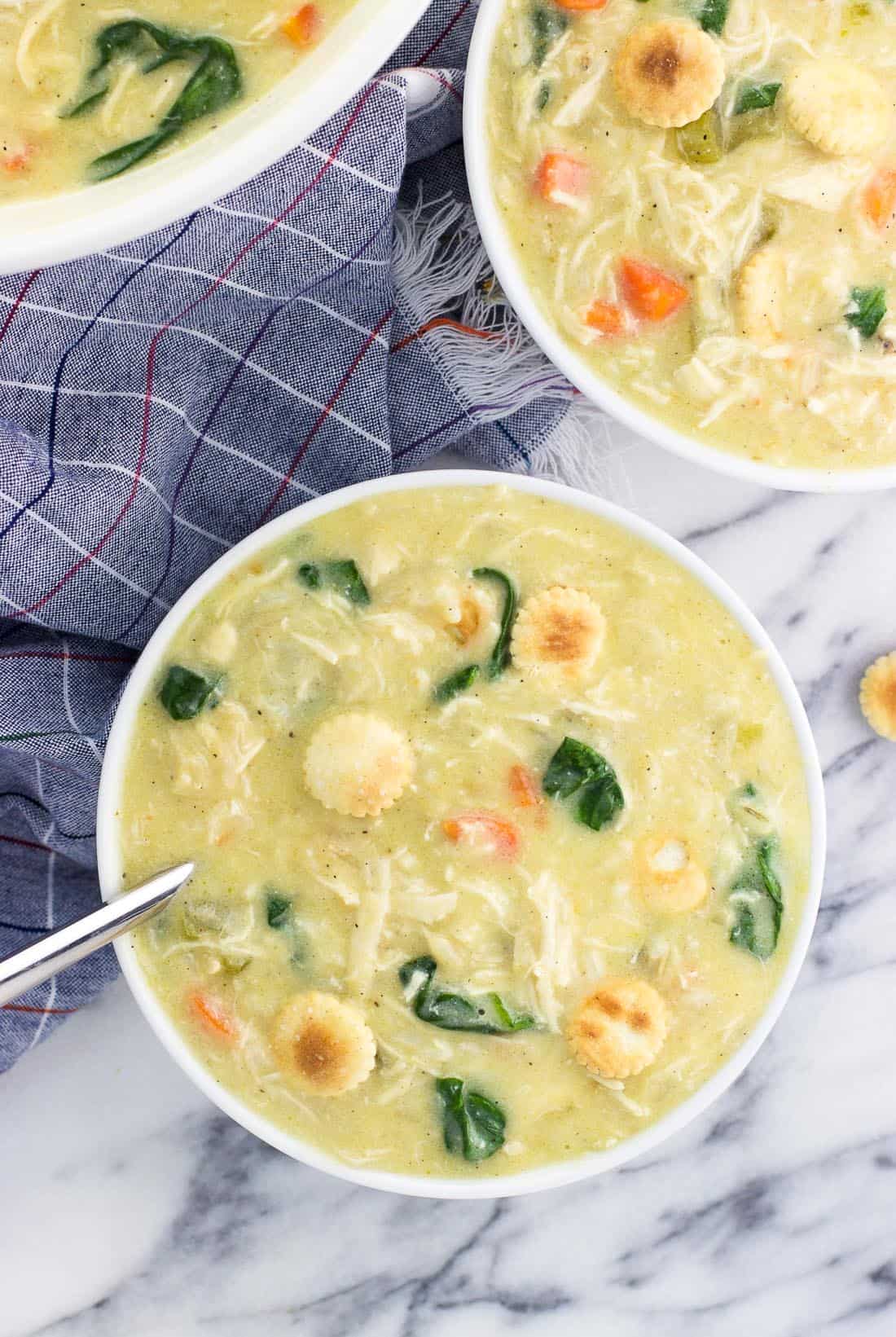 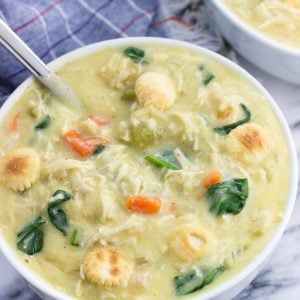 Using butter: If you'd rather use butter instead of ghee, you can use 9 tablespoons of butter to 3/4 cup flour. Chicken quantity: Using 1 1/2 lbs of chicken breasts results in a seriously hearty soup. Use less if you'd like a less bulked up soup. Leftovers: If leftover portions thicken up too much once refrigerated, thin with a little bit of water while heating up.

Calories: 432kcal
Tried this Recipe?Tag @mysequinedlife - I love to see what you're making! 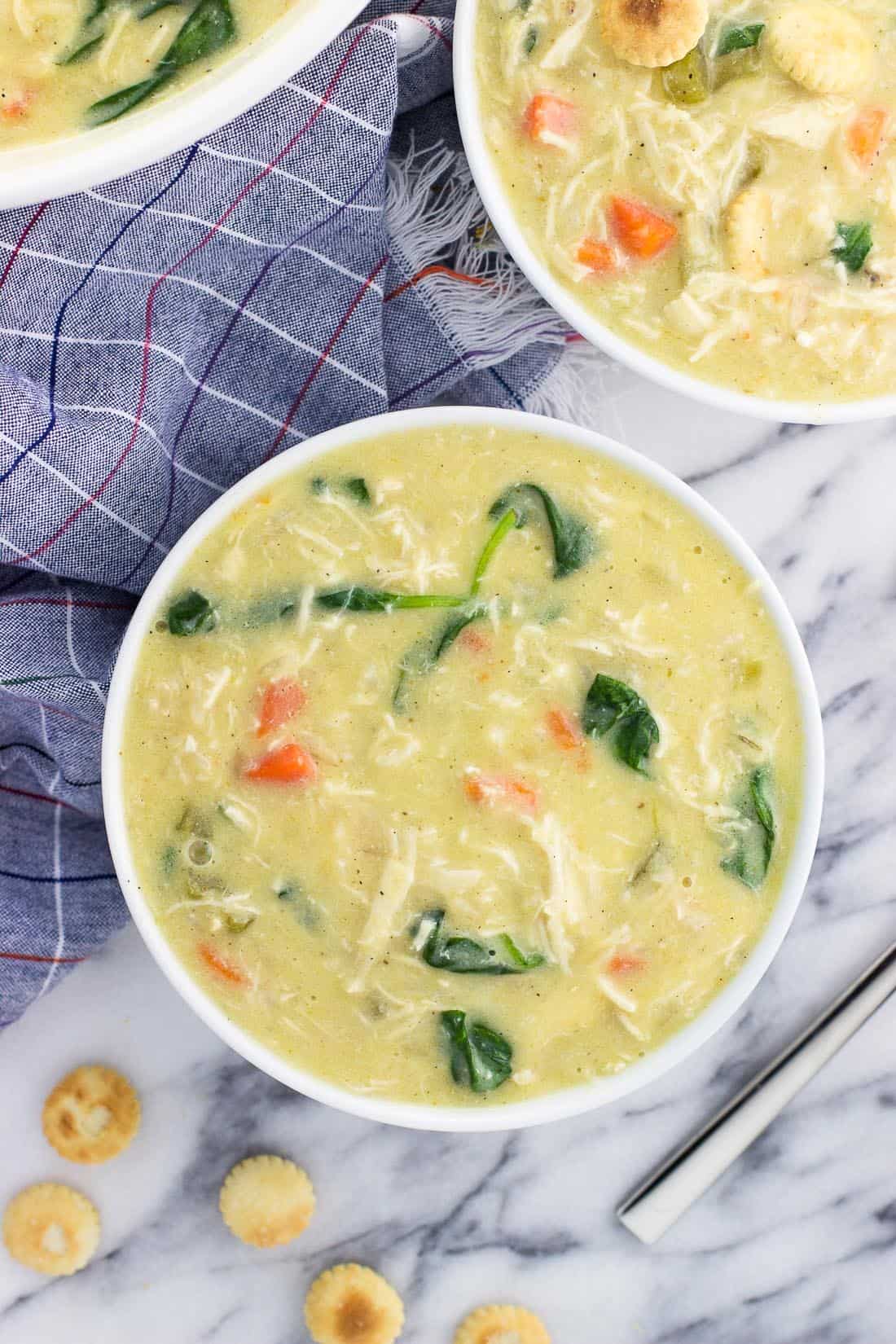