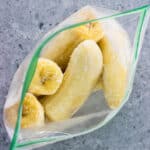 It's so easy to have perfectly ripened bananas on hand for baking, smoothies, and more! Prep bananas several different ways to freeze them for use in future recipes with these simple steps.

Having bananas in the freezer is one of my kitchen "musts". Really inexpensive and versatile, they're a staple in healthy baking recipes and an integral part of my near-daily filling green smoothie.

So buy a bunch (or two!), let them get nice and spotty on your kitchen counter, and read on to see how to freeze bananas several ways depending on how you want to use them.

In my opinion this is the best way to freeze bananas. Wait until the bananas have ripened to your preferred level of spotting, then cut each in half. Discard the peel and freeze the halves next to one another in an air-tight bag.

If you primarily use bananas in baking recipes you may wish to front load the work and puree ripened bananas and add to an ice cube tray to freeze. This way you can simply thaw and add directly to a recipe.

Some caveats of this method are:

The above two methods cover the bases for all the ways I use bananas, so they're the only two ways I freeze them. The following two ways also work, but have more drawbacks.

This works just fine, however you'll need to place the banana rounds in a single layer on a sheet pan to freeze them individually before adding them to an air-tight bag. Otherwise they'll freeze together and be hard to separate. I rarely have freezer room for that. It's also hard to eyeball how many rounds make up one banana if needed for a recipe.

You can freeze a whole banana in the peel, though you won't be able to peel the frozen banana so you will need to wait for it to thaw. It will also release a ton of moisture while thawing, so make sure to place it in a bowl so it doesn't make a mess in your fridge.

Recipes to Use Frozen Bananas

If thawing frozen bananas to use in baking recipes, you'll notice a fair amount of watery liquid being released. Depending on the recipe you may want to discard the excess moisture as to not make a batter too liquid-y.

Here are some ways to use up frozen bananas: 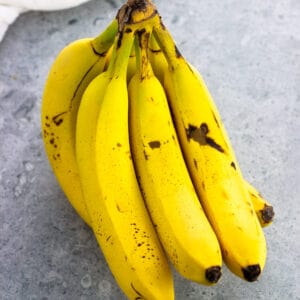 How to Freeze Bananas

It's so easy to have perfectly ripened bananas on hand for baking, smoothies, and more! Prep bananas several different ways to freeze them for use in future recipes with these simple steps.
No ratings yet
Print Pin Rate
Course: How-To
Cuisine: All
Prep Time: 5 minutes
Total Time: 5 minutes
Author: Alyssa