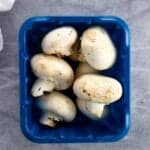 Wash them? Definitely don't wash them? When it comes to how to clean mushrooms, there's a lot of conflicting guidance out there. Read on for simple and straight-forward tips to prep mushrooms for cooking.

Looking online for tips on how to clean mushrooms can make your head spin. Some will have you believe they'll transform into squishy, inedible sponges if they so much as take a brief dip under a stream of water. On the other hand, a container of mushrooms can contain quite a bit of dirt. So what do you do?

As long as you keep in mind a few main points, there are several ways you can effectively wash mushrooms (using water!) without worry that you'll ruin them.

Should I Worry if my Mushrooms are Really Dirty?

After buying a container of mushrooms that had a lot of dirt in it, I researched what this dirt was to assess my concern level regarding harmful microorganisms and how thoroughly I needed to clean them. As it turns out, there really wasn't a need for worry.

Commercially-produced mushrooms grow in material that's either pasteurized or otherwise sterilized (per the University of Idaho), which removes contaminants. So while the thought of biting into a clod of dirt alongside a mushroom isn't the most appealing, there by and large isn't the worry of ingesting anything bad.

Either of these methods work for button/cremini/shiitake mushrooms, though see the section below for portobello-specific steps. With either method, wash them just prior to cooking to avoid soggy, slimy mushrooms.

Place whole mushrooms in a colander or salad spinner and rinse them under running water to remove specks of dirt. Spin them if using salad spinner to dry, or otherwise pat them dry with a paper towel.

Instead of rinsing them under running water, you can wipe mushrooms with a damp paper towel or clean dish cloth to remove visible dirt.

How to Clean Portobello Mushrooms

Since portobello mushroom cups are larger and have a bigger capacity to hold water, I always go with method #2 for cleaning them.

Do you have to remove mushroom stems before cooking?

For button and cremini (baby bella) mushrooms you can leave the stems on, though you can trim them shorter if the ends feel a bit hard and tough. Portobello and shiitake stems will be too tough to leave on and eat, so remove them before slicing/cooking.

Can you eat portobello mushroom gills?

Yes, they're safe to eat. However they'd likely get in the way and have an unappealing taste if you're intending to stuff the caps, so they're often scooped out.

Do you have to clean sliced mushrooms?

Containers of sliced mushrooms will likely have much less dirt than whole ones. Even still, I like to give them a brief wipe down or rinse and thorough patting dry before cooking. In my experience store-bought sliced mushrooms go bad quicker than whole mushrooms, so don't wash them and then store them back in the refrigerator. Use them right away.

Is a mushroom brush necessary?

A specialty kitchen tool, a mushroom brush is intended to brush away dirt while being gentle on a mushroom's surface. I'm sure some may find it worthwhile, but I haven't found a reason to buy one as the salad spinner/damp paper towel methods work fine for me. 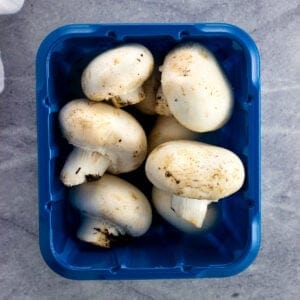 How to Clean Mushrooms Before Cooking

Wash them? Definitely don't wash them? When it comes to how to clean mushrooms, there's a lot of conflicting guidance out there. Read on for simple and straight-forward tips to prep mushrooms for cooking.
5 from 1 vote
Print Pin Rate
Course: How-To
Cuisine: All
Prep Time: 5 minutes
Total Time: 5 minutes
Author: Alyssa