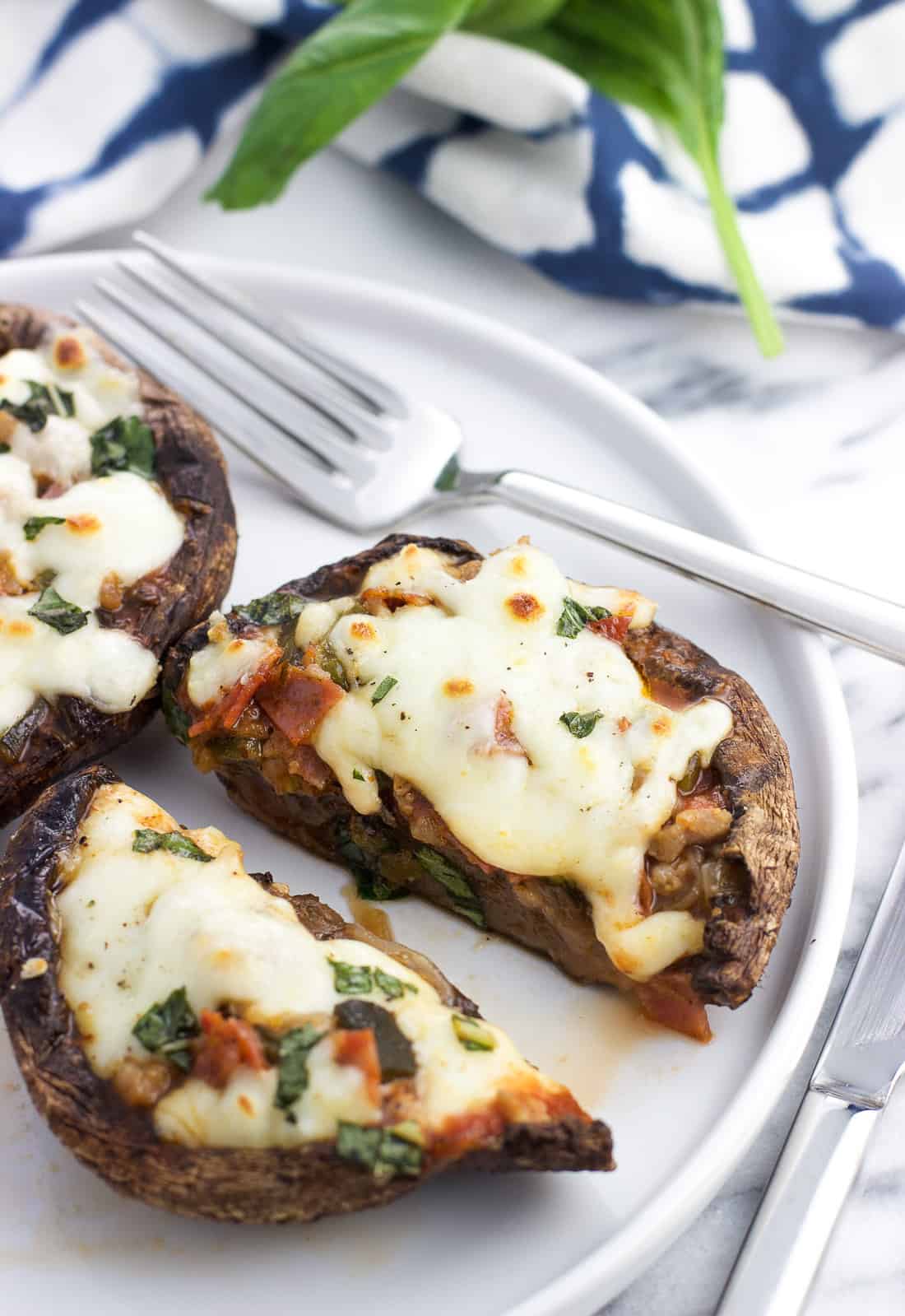 Having lived together for years, I’ve realized I seem to have absorbed some of my husband’s food dislikes. Thankfully he likes just about everything (and we agree on several big dislikes), but possibly our biggest point of contention is regarding mushrooms.

I really like mushrooms, he moderately dislikes them. And that’s fine. But as chief grocery shopper, I recently became aware of the fact that I don’t buy them that often.

Why? I don’t really know. I pass them by at least once a week when I grab a stalk of celery, which is in the same display case. It’s probably to do with cooking laziness and not wanting to make two dishes or separate out mushrooms from a portion of whatever it is we’re eating.

It was time for a change. Since learning he actually likes the sliced baby bellas I add to my slow cooker pork tenderloin balsamic mushroom sauce, it’s been my mission to PORTOBELLO EVERYTHING I can to keep this goodwill going.

I’ve since been stuffing various ingredients into portobello mushroom caps (hello, my old friend!) and can’t get enough. This supreme stuffed portobello mushroom pizza recipe is filled to the brim with classic supreme pizza flavors, all in one healthier vessel. 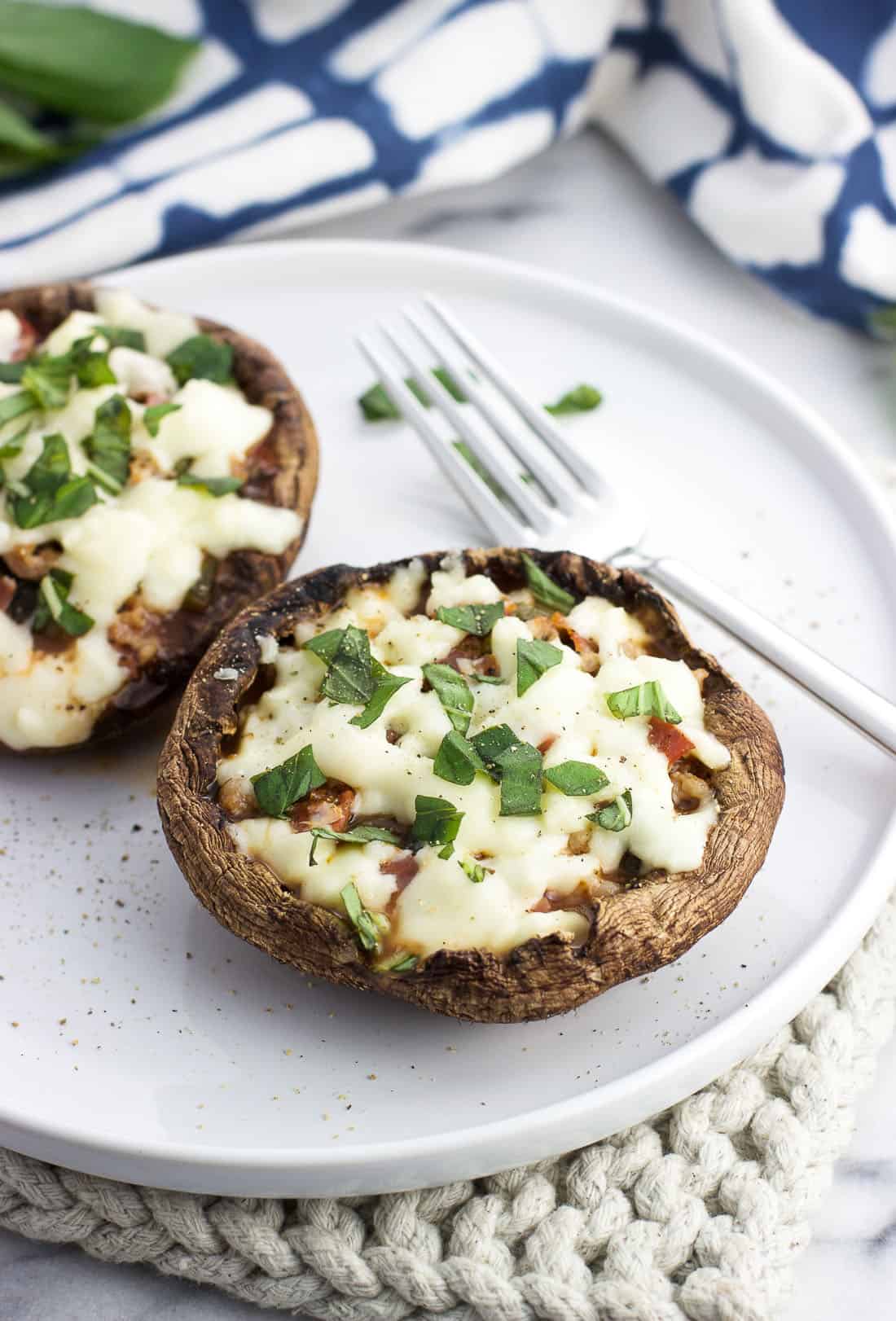 How to clean portobello mushrooms

This recipe is pretty simple in terms of ingredients and method, but there are a few things to keep in mind to get the best portobello mushroom pizza eating experience possible.

You’ll notice a lot of these tips circle back to the main point of criticism with portobello mushrooms: they can get soggy. Not good!

Because we want to prevent the mushrooms from soaking up too much liquid, you don’t want to dunk them under water to clean them off. You’ll still need to tidy them up because they’ll likely be dirty, but do so by dampening a paper towel and gently wiping each mushroom cap down until the dirt is removed.

As an aside, I was reading one of the home magazines and they mentioned using a mushroom brush, which is just as it sounds: a brush specifically designed for the purpose of cleaning mushrooms.

By all means go ahead and use one of those if you have one, but I’ll stick to the paper towel method. 😉 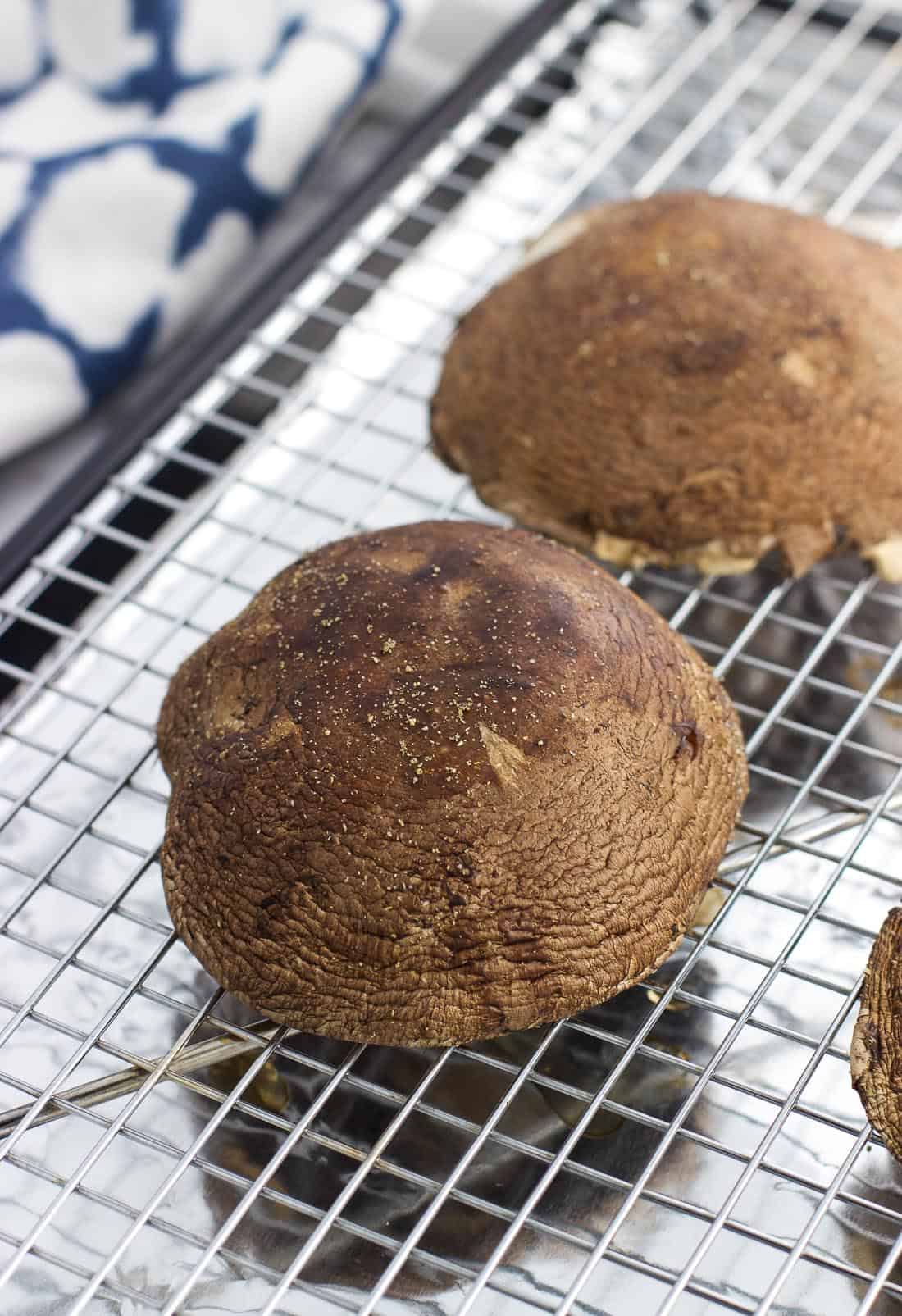 Do you remove the gills?

While they’re technically edible, portobello mushroom gills are large and pretty dark. I always remove them when I’m cooking with portobellos, especially in stuffed portobello cap recipes like this one.

For one thing, the dark gills can mix with the other ingredients and color everything a dingy brown. And for stuffed recipes, removing the gills frees up extra space for your filling.

To remove them, just gently scrape them out with a spoon. It doesn’t have to be perfect if small bits are left behind.

When I want something to ward off moisture in the oven, I’ll use an oven-safe wire rack set inside a baking sheet. This prevents the bottom side of the food from becoming soggy because it lets the air circulate all around it while it bakes.

After quickly seasoning the mushrooms, I placed them (former) gill-side down on a WELL sprayed wire rack and baked them for about ten minutes. You’ll be surprised to see how much moisture ends up on the baking sheet afterwards, so do use a rimmed baking sheet. 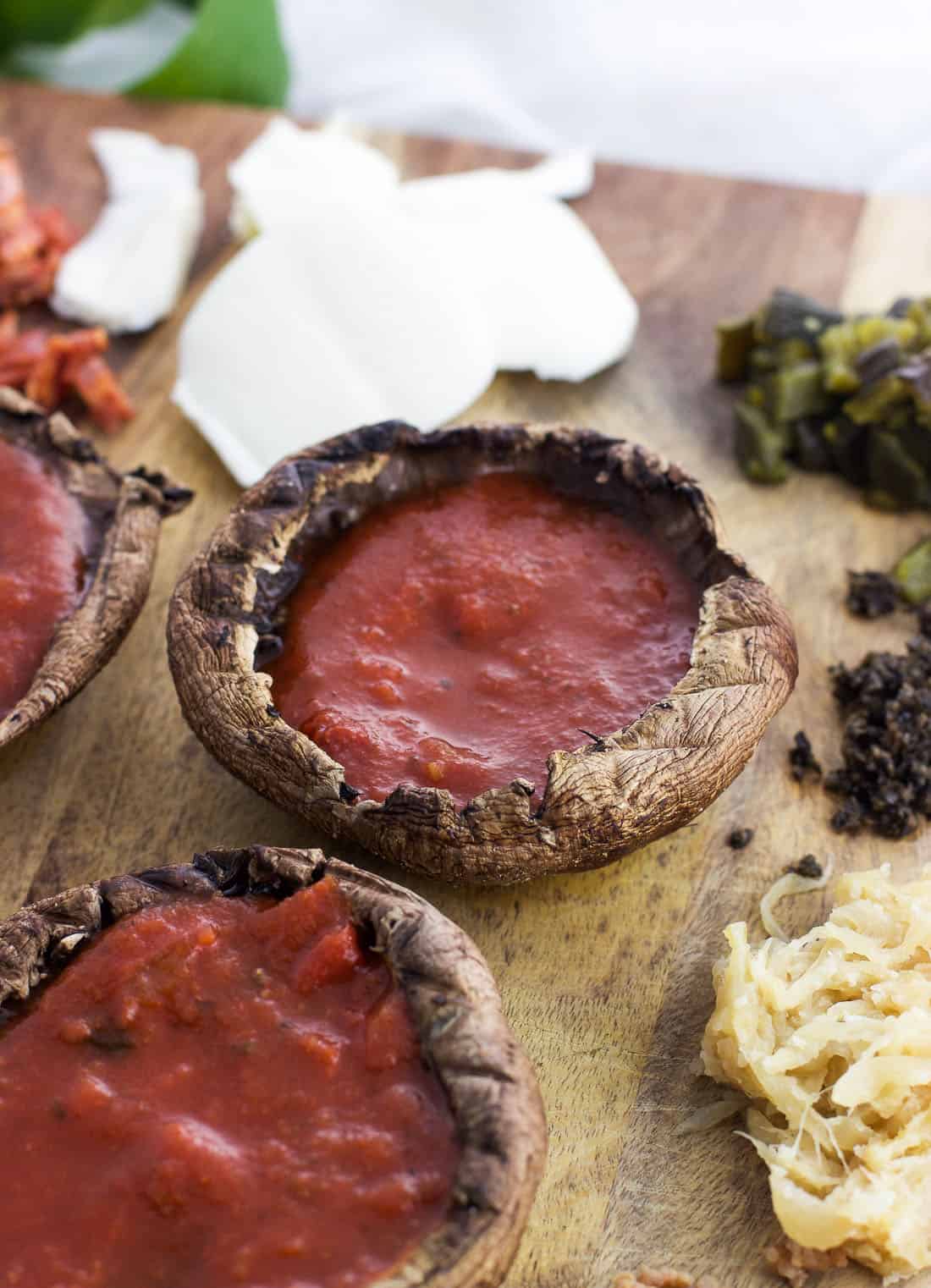 Once the mushrooms cook off some moisture, it’s time for toppings. A supreme pizza has a lot going on, with a big assortment of vegetables and meats. Olives, onions, mushrooms, and peppers are usually in the mix, along with crumbled sausage and pepperoni.

Since the whole shebang is going in a mushroom, I left mushrooms out from being a topping. The rest of everything is here, though.

Of course, please mix and match toppings as you like. This would be a great recipe for using up leftover bits of cooked meat, extra vegetables, etc. My husband and I both agree that we’re not big olive fans in general, but somehow they just work with the supreme pizza assortment of toppings. 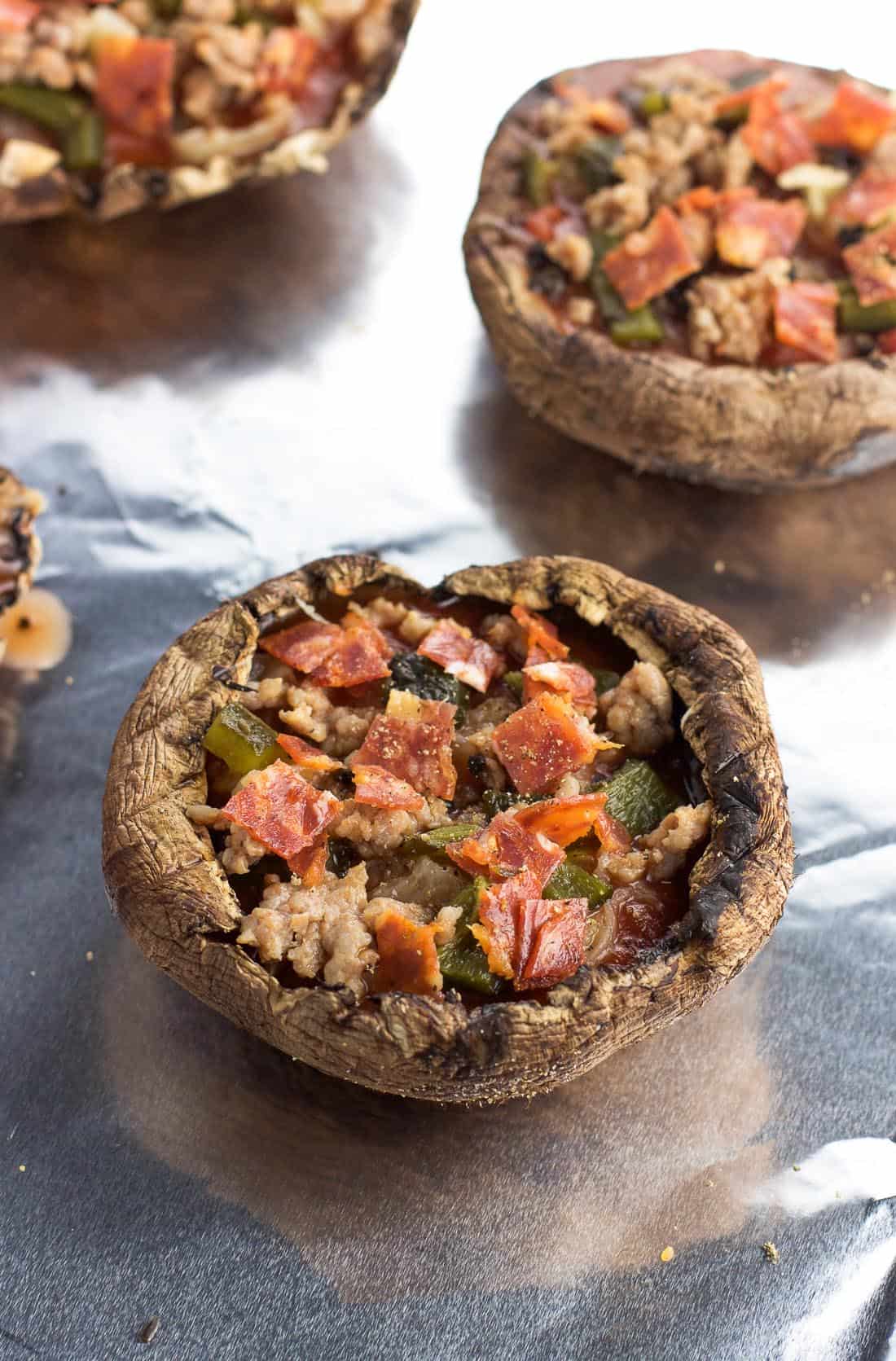 Once assembled, sprinkle shredded mozzarella over top and bake for another ten minutes or so, or until the cheese is melted and everything is heated throughout. You can also pop them underneath the broiler for a quick minute to get the cheese even more gooey (highly recommend).

If someone doesn’t like mushrooms, you’re not out of luck! You can add the pizza sauce and toppings (sans mushrooms) to a lightly toasted English muffin, then stick it under the broiler until the cheese melts. That way your crowd can all enjoy mostly the same meal without undergoing a ton of extra effort.

Switch up the toppings. While we love this fun supreme pizza-inspired spin, any of your favorite pizza toppings would be great. Omitting the sausage and pepperoni would make this dish vegetarian. 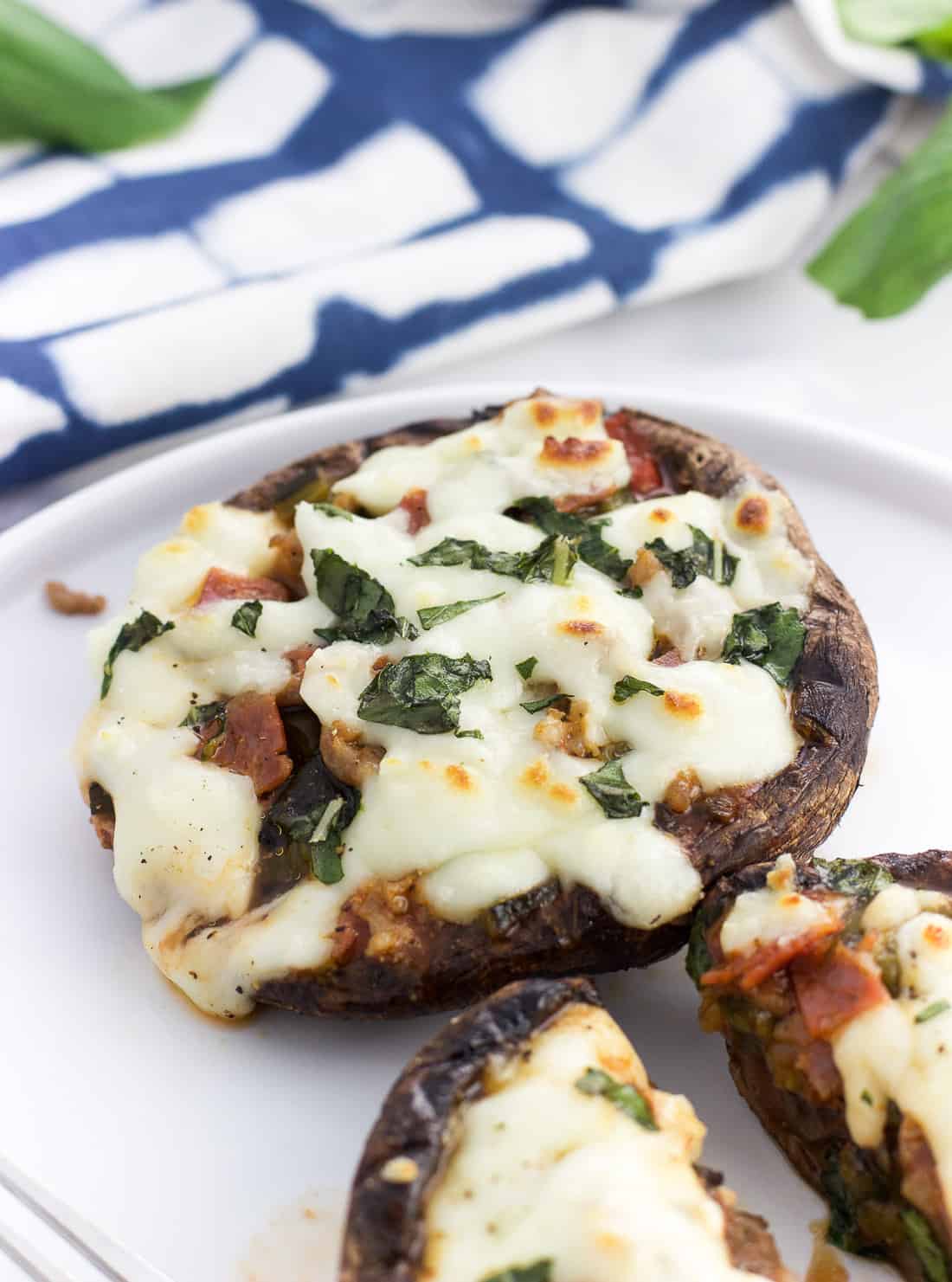 Since just 3/4 cup of crumbled sausage is used here, you can make a batch of stuffed mini peppers and an Italian sausage quesadilla with the remainder. 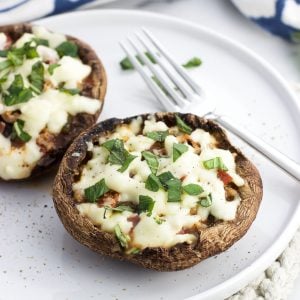