A simple, bold marinade provides a ton of flavor to these hearty portobello mushroom burgers. With cooking instructions for both outdoor grill and indoor grill pans, this quick recipe is satisfying for vegetarians and meat eaters alike!

Portobello mushrooms have a meatier texture than other mushrooms, making them a great stand-in for dishes traditionally made with meat. And while I would never describe their flavor on their own as “meaty” (…it’s a mushroom), they absorb the flavor of a marinade wonderfully and become nice vessels for a variety of other ingredients, whether that’s stuffing with cheese and breadcrumbs or piling high with your favorite burger toppings.

There are lots of ways to make portobello mushroom burgers your own, but this simple variation is my usual go-to.

Should I remove the gills when making portobello mushroom burgers?

The gills are edible so I leave them on while making portobello mushroom burgers. I don’t find they get in the way or have an unappealing taste as they would be if you were stuffing portobellos instead.

Why does it matter which side I grill first?

Mushrooms have a high moisture content which gets released when they cook. Cooking the top of the cap first, with the cavity upright, allows the moisture to collect in that space. It will then get discarded when you flip the cap over so your portobello mushroom burgers aren’t too wet.

How should you serve portobello mushroom burgers?

As a standard baseline I like to use cheese (a vegan variety if you like), red onion, tomato slices, and leafy greens. Keep in mind that portobello mushrooms don’t have much fiber and protein, so opting for more nutritious accompaniments is a good idea: whole-grain buns, avocado slices, baby kale leaves, bean or quinoa salads as a side dish, etc.

How do you store and reheat leftover portobellos?

Store the leftover portobello caps separately from buns and toppings as they have a high moisture content. Reheat the portobellos in a pan set over medium heat until sufficiently warm throughout. In a pinch you can also use the microwave, though try not to overheat them in there as this can compromise the texture. 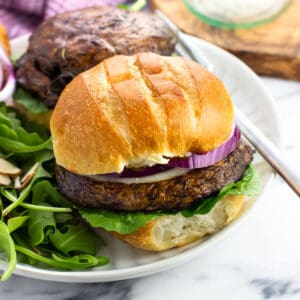 For an outdoor grill:

For an indoor grill pan:

Ingredient Notes Portobello mushrooms: Buy the largest caps you can find as they tend to shrink some as they cook. You can leave the gills on as they’re edible. Liquid smoke: You can leave this out if you don’t have it, but this provides a “meaty” flavor that really enhances this portobello burger marinade. You can find a small, inexpensive bottle near the BBQ sauces in grocery stores. Many of the main brands are vegan. Oil for the grill: Use a high smoke point cooking oil with a neutral flavor, such as vegetable, corn, or canola. Recipe Tips Nutrition: This is a rough estimate assuming that the mushrooms absorb one-third of the total marinade. It includes standard hamburger buns but not any other toppings you might add.