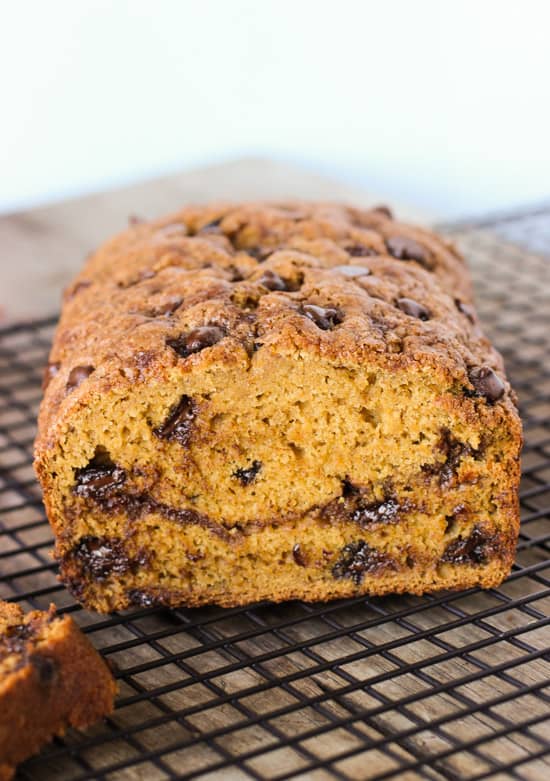 You know those times when you’re running low on kitchen inspiration? I’ve been there a lot lately, and I think I just may have found the cure. Cleaning out your kitchen cabinets!

We have a tiny apartment with tall ceilings, so the top shelves of our cabinets might as well be a black hole. Groceries go up and never come down. But recently I wrangled the step ladder so I could get a good look at the goodies languishing away up there and geeeeez was I glad I did.

I found a bag of marshmallows that became a fab kitchen sink cereal treat and an extra bag of white chocolate chips, which were promptly opened and dumped into loaded oatmeal cookies. Then I found a leftover can of pumpkin puree, which was quite a surprise between all of the recipe testing I’ve been doing lately. And then I realized it was November and I hadn’t yet made pumpkin bread. 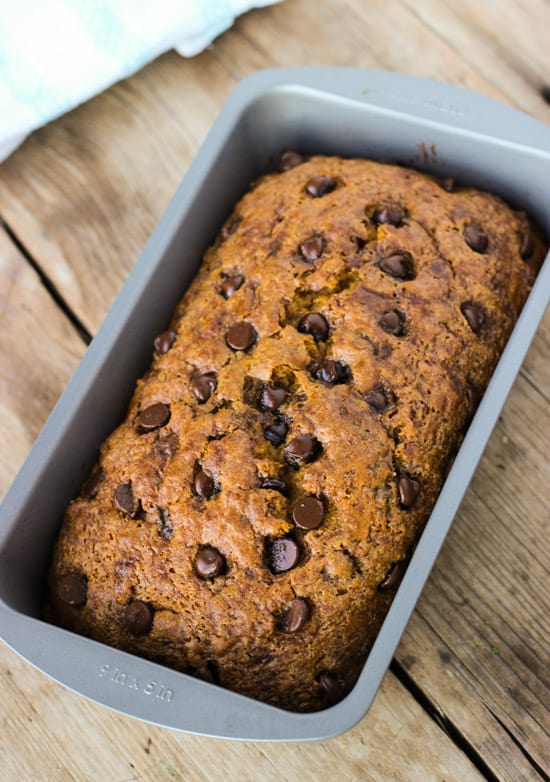 While pumpkin bread was on the menu, I spied two bananas on the verge of disintegrating (not really, ). This bread became the best of both worlds – pumpkin banana bread. It’s super moist but doesn’t use any butter or oil, thanks to all of the pumpkin, banana, and coconut milk goodness packed into this baby. It has the warm spice of pumpkin bread with a tiny little tinge of banana, es-peeec-ially when you get a bite with a chocolate chip or two in it, too. Oh, and there’s a brown sugar and cinnamon layer throughout and on top. Can ya stand it? 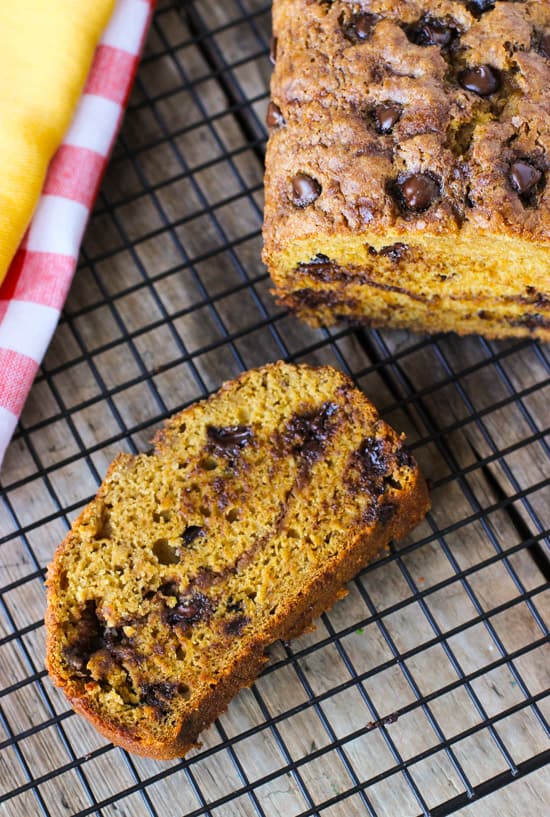 Do you want to know why there’s coconut milk in here? Another top kitchen cabinet find. It’s an abyss of lost groceries up there, guys. You can sub in regular milk or any milk substitute you prefer, but I was on a roll with cracking into the cupboard of misfit ingredients and I didn’t want to stop just yet! 🙂

As with the milk, this recipe is open to customization. Dark chocolate chunks or cinnamon chips would be miiighty delicious methinks (or no chips at all, if you roll that way). Same thing with the brown sugar/cinnamon layer. But I will tell you that I’m a little bit obsessed with it. It adds a sweet, warmly-spiced crispness to the top crust that had me discreetly cutting straight pieces of crust off. But if you’re pressed for time (or, at least as pressed for time as one can be when making bread that bakes for one hour+), this bread will certainly bake up wonderfully without.

Except now that I’ve shared with you how sugary sweet and delicious the crust is, I wouldn’t want you to be gripped by FOMO. It’s an extra minute or two well spent! Surely a moist baked good made without oil or butter deserves a high five in the form of extra sugar and spice. At least that’s what my sweet tooth told me. 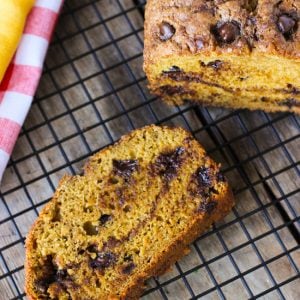 *If you don't have maple extract on hand, feel free add in an extra 1/2 tsp of vanilla extract.
Tried this Recipe? Pin it for Later!Mention @MySequinedLife or tag #MySequinedLife!