These fudgy pumpkin brownies combine the best of both worlds in one dessert. Easy fudgy brownie batter is swirled or topped with perfectly spiced pumpkin mixture in this wonderful fall dessert.

Ever end up with a small amount of pumpkin puree left after you've cracked open a can for a recipe?

That's what inspired me to make these pumpkin swirl brownies. I was left with one-third of a cup of pumpkin puree and wanted to put it to good use.

I also had a craving for brownies (what else is new, right?) so what better way to satisfy both problems, if you will, than make pumpkin brownies? They have a denser, fudgy chocolate bottom with a softer, more cake-y pumpkin layer, leading to a variety of textures and flavors in each bite.

While at first glance it may look like there are lots of ingredients needed for these pumpkin brownies, the two layers share many of them in common (chocolate, butter, flour, eggs, vanilla extract, and salt).

Can I use a different pan size?

How do you store pumpkin brownies?

Once the brownies have completely cooled, store them at room temperature in an air-tight bag or container for 3-4 days. If you know you won't be able to finish them all in that time, wrap them in foil, place in an air-tight container, and freeze for four months (or longer). 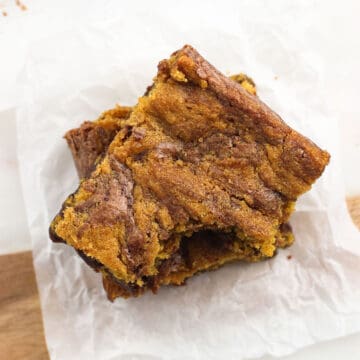 For the Brownie Layer:

For the Pumpkin Layer:

Ingredient Notes Butter: Be sure the butter used in the pumpkin layer is softened. This texture is important for it to cream together with the brown sugar and form a fluffy structure base. Chocolate: Chocolate chips, chunks, or a chopped up chocolate bar will all work fine. My preference is to use mini chocolate chips for the amounts stirred into both the brownie and pumpkin batters, but really anything will work. Flour: Measure flour using the "spoon and level" method. Stir up the flour in its bag or canister so it's not packed down, then spoon the fluffed up flour into dry measuring cups until overflowing. With the cup over the flour bag (so the excess falls back in), level off the top of the measuring cup so the cup is full without being condensed. Recipe Tips

Brownie layer adapted from my One Bowl Small-Batch Brownies