Cocoa baked banana chips are a healthy, oven-baked snack with a satisfying crunch. Just four ingredients are all you need for this easy recipe! 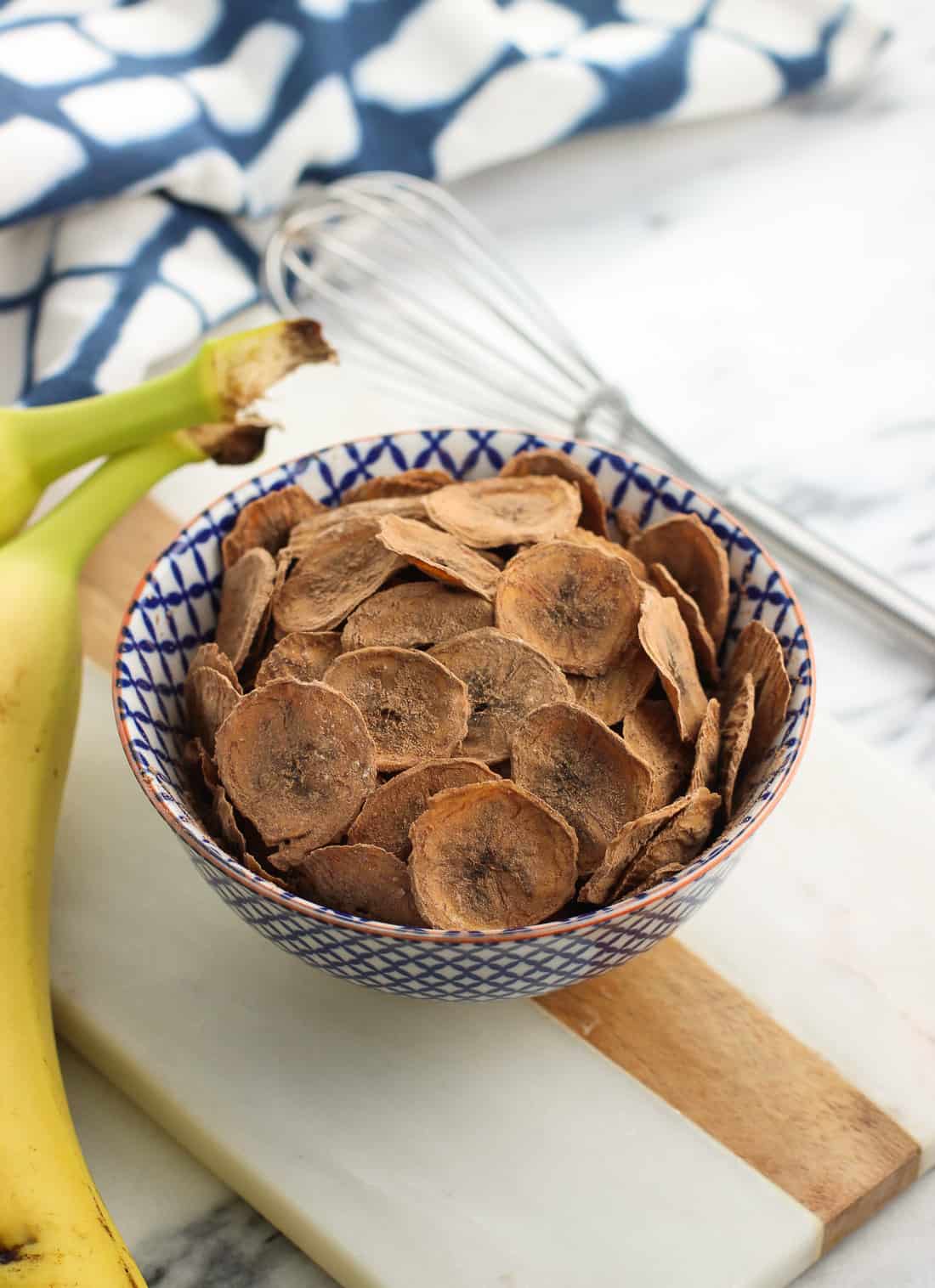 How about a bowl of banana chips to end the work week on a high note? They're certainly not the typical crunchy snacks you might expect to dig into on the weekend like chips or pretzels, but they're a healthier option that's WAY cheaper to make yourself than buy.

I'm a big fan of crunchy chip-like snacks such as homemade cinnamon sugar pita chips and spiralized baked apple chips. Those two recipes are great because they're both oven-baked, making them a healthier option than fried chips - of any kind. The apple chips don't even use oil for that matter, just needing a sprinkling of ground cinnamon and sugar. Easy!

Since I've developed a tendency for over-buying bananas while I'm grocery shopping, I've been thinking of new ways to use them up beyond simple snacking.

With those apple chips in mind, I gave bananas a whirl to see if I could bake them as crispy as the ones you'll find in tropical trail mixes (where I was first introduced to them). Turns out - you can. 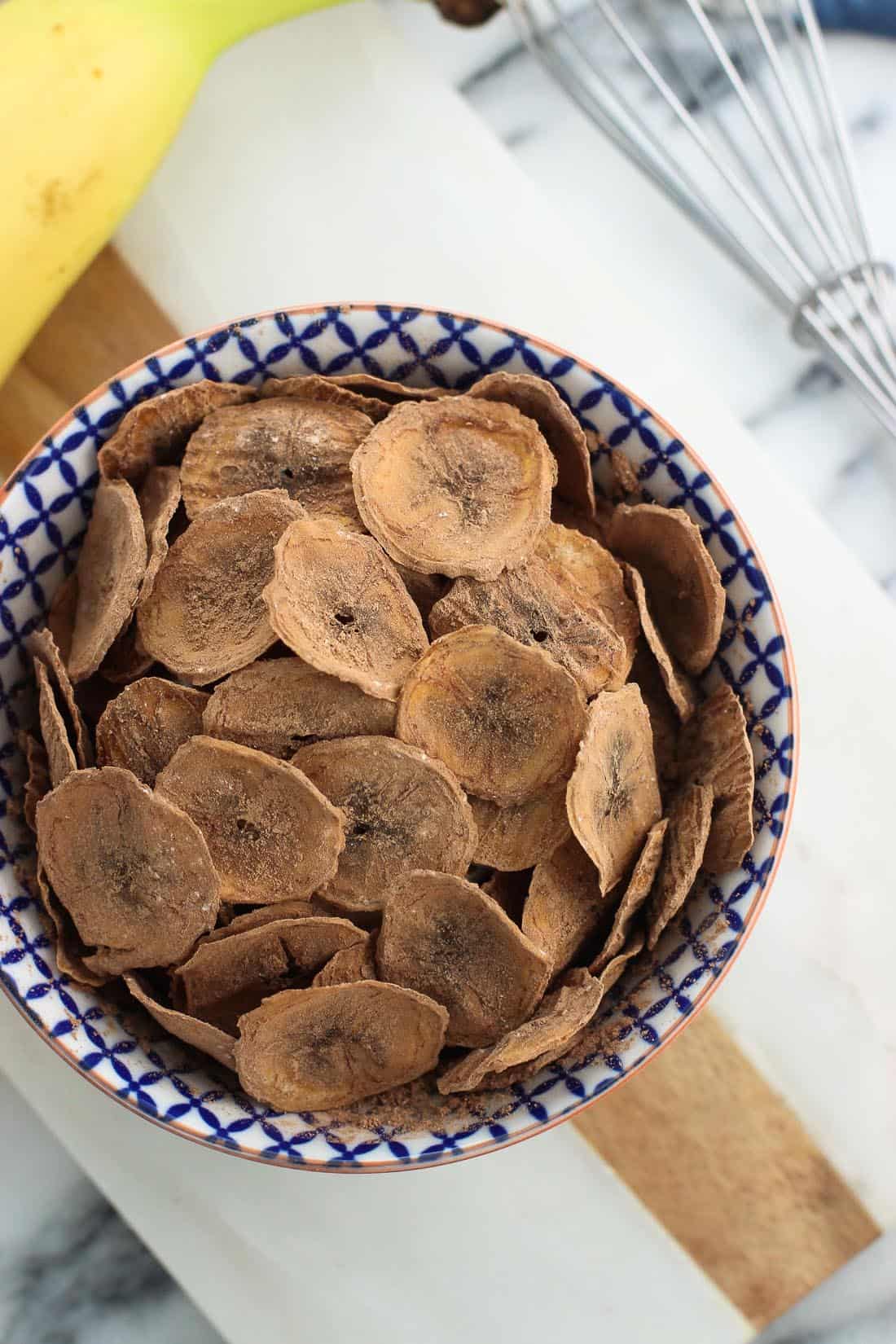 Just four ingredients are all we need for these baked banana chips:

Since each banana yields many chips, you can halve this recipe if you just have one or are looking for a smaller yield.

The little bit of lemon juice prevents the banana chips from browning too much while they bake. You won't be able to taste the lemon once the cocoa banana chips are finished baking.

And now for the cocoa-dusted part. I love cocoa-dusted almonds, so I wanted to try something similar with these cocoa banana chips. Since unsweetened cocoa powder is not pleasant to eat on its own, I combined it with an equal amount of confectioners' sugar for sweetness.

Much like with the almonds, this cocoa coating adds a hint of rich chocolate flavor but is much less sweet than a dessert, making it a perfect, sweet-leaning afternoon snack. 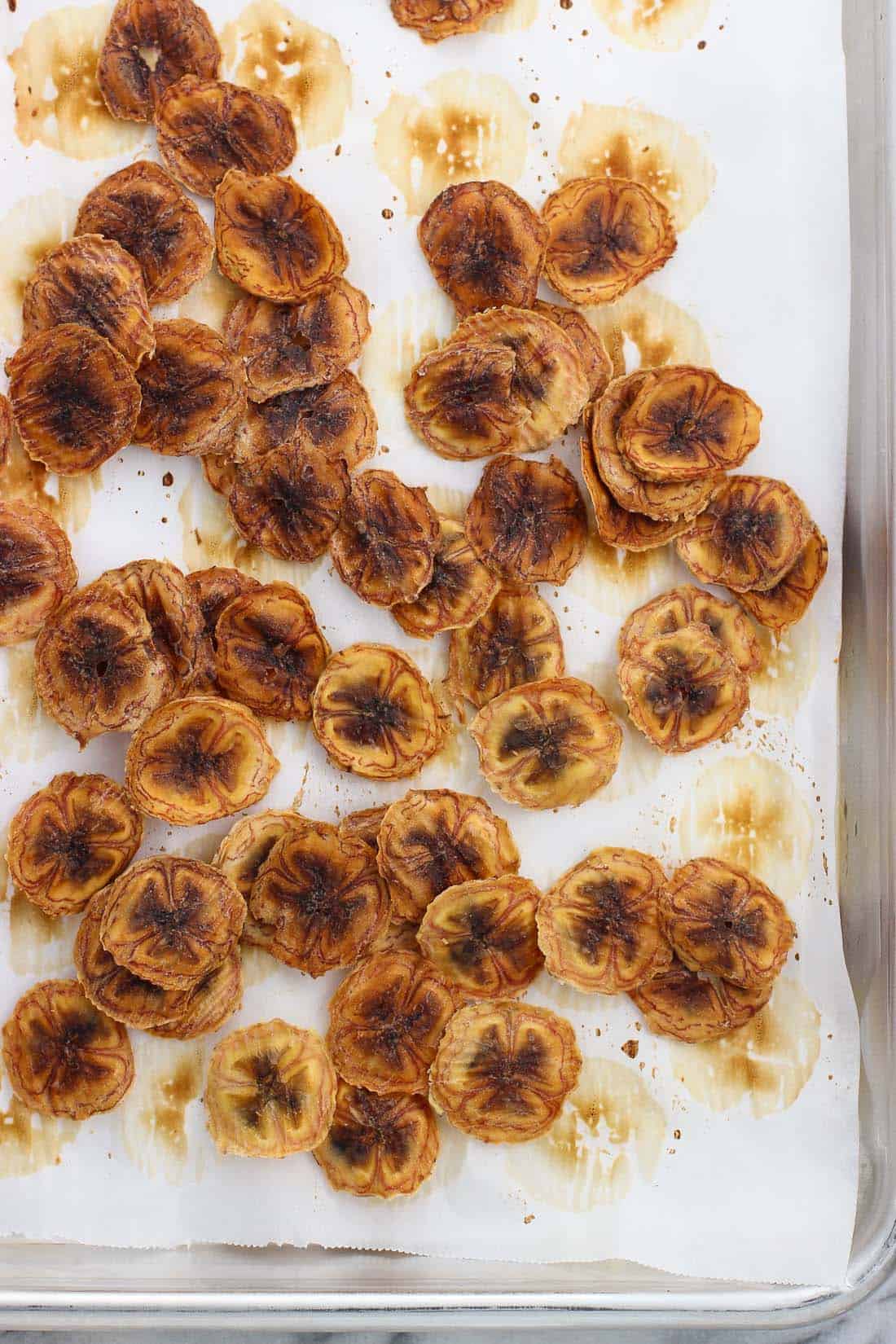 An important part of this recipe is taking a little extra care with your slicing.

If the slices are too thick they won't crisp up fully, which is what we don't want. I took out the measuring tape when I was slicing and found that my slices landed somewhere between one-sixteenth and one-eighth of an inch each. They certainly don't have to be exactly the same width down to the millimeter, but I recommend slicing them within that range.

Each banana yields a ton of chips, so you'll want to use your largest baking sheets for this one. You can place the banana chips fairly close together on the parchment paper because there's no rising or anything here. In fact the chips contract a bit as they dehydrate and cling to the parchment. Don't worry though because they'll be pretty easy to pop off.

The oven temperature (250°F) listed below isn't a typo. You'll want to bake these banana chips low and slow so they don't burn. Bake them for one hour, then remove the sheet from the oven. Flip each banana chip over, place the sheet back in the oven, and then shut the oven off. Let them stay in their until they're completely cooled!

Cooling in a shut-off oven is an important step that I've found to be crucial in yielding crispy baked banana chips. This obviously adds inactive time to your recipe, but it does the trick to help them firm and crisp up nicely.

Once cooled, you can simply enjoy the baked banana chips 'bare' or you can do what I did here and toss them in an even mixture of unsweetened cocoa powder and confectioners' sugar. Confectioners' (powdered) sugar matches the consistency of the cocoa powder so it mixes in well without lumps, which is why it was my pick over granulated sugar. 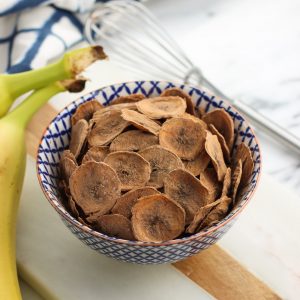 You can easily half this recipe if you'd like to just use one banana. These cocoa banana chips are most crisp the day they're made or the day after. The cool time is estimated at one hour, but will vary depending on your oven.