As the owner of a sweet tooth that leans much more heavily on the chocolate side (versus fruity desserts), brownies are an easy favorite.

But getting through a standard batch of brownies as a household of two is a little daunting if there aren’t any get-togethers or parties on the horizon. That’s where these small batch brownies come in.

This recipe yields eight (not huge) brownies, making them just the thing for those times you want something sweet but can’t handle having a ton of leftovers.

Did you know that even with the same ingredients, the first step of your brownie recipe determines whether you’ll have fudgier or cakier brownies?

How do you store brownies?

Once cooled completely, wrap brownies snugly in plastic wrap and store them in an air-tight container at room temperature. You can also store them the same way and freeze them for several months (or longer).

What type of variations can I make to these small batch brownies?

You can easily switch up these small batch brownies by adding in the mix-ins of your choice. An extra quarter-cup of chocolate chips, chopped up nuts, candy bar pieces, even Oreo cookies. You can also add a flavored extract like peppermint.

Note: If you’re returning to this post via a saved link or Pinterest, this recipe was updated with slight recipe changes in March 2022 from its original publish date in May 2016. Over the years I began adding a bit more flour (now one-half cup, up from one-quarter cup) and omitting the stirred-in chocolate chips, though you can always keep doing that if you like! 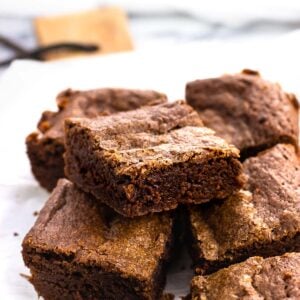 Ingredient Notes: Chocolate: You can use all semisweet chocolate if you’re not a fan of dark chocolate, but I’m partial to the deeper flavor that comes with mixing the two varieties. Flour: If not weighing the flour, measure it using the spoon-and-level method. Stir up the flour in its container so it’s not packed down, then spoon it into your measuring cup (without pressing it down) until it’s overflowing. Then hold the measuring cup over top of the flour container and use a straight-edge like a knife or the handle of the spoon to level off the top, letting the excess flour fall back into the container. Recipe Tips

Recipe slightly adapted from The Art & Soul of Baking by Cindy Mushet/Sur La Table, which has long been one of my favorite baking cookbooks. Unfortunately it appears that this cookbook is no longer in print.