This potato and white bean soup with kale is thick and creamy – all the while being healthy! This dairy-free soup recipe is packed full of nutritious ingredients for a satisfying and warming lunch or dinner. 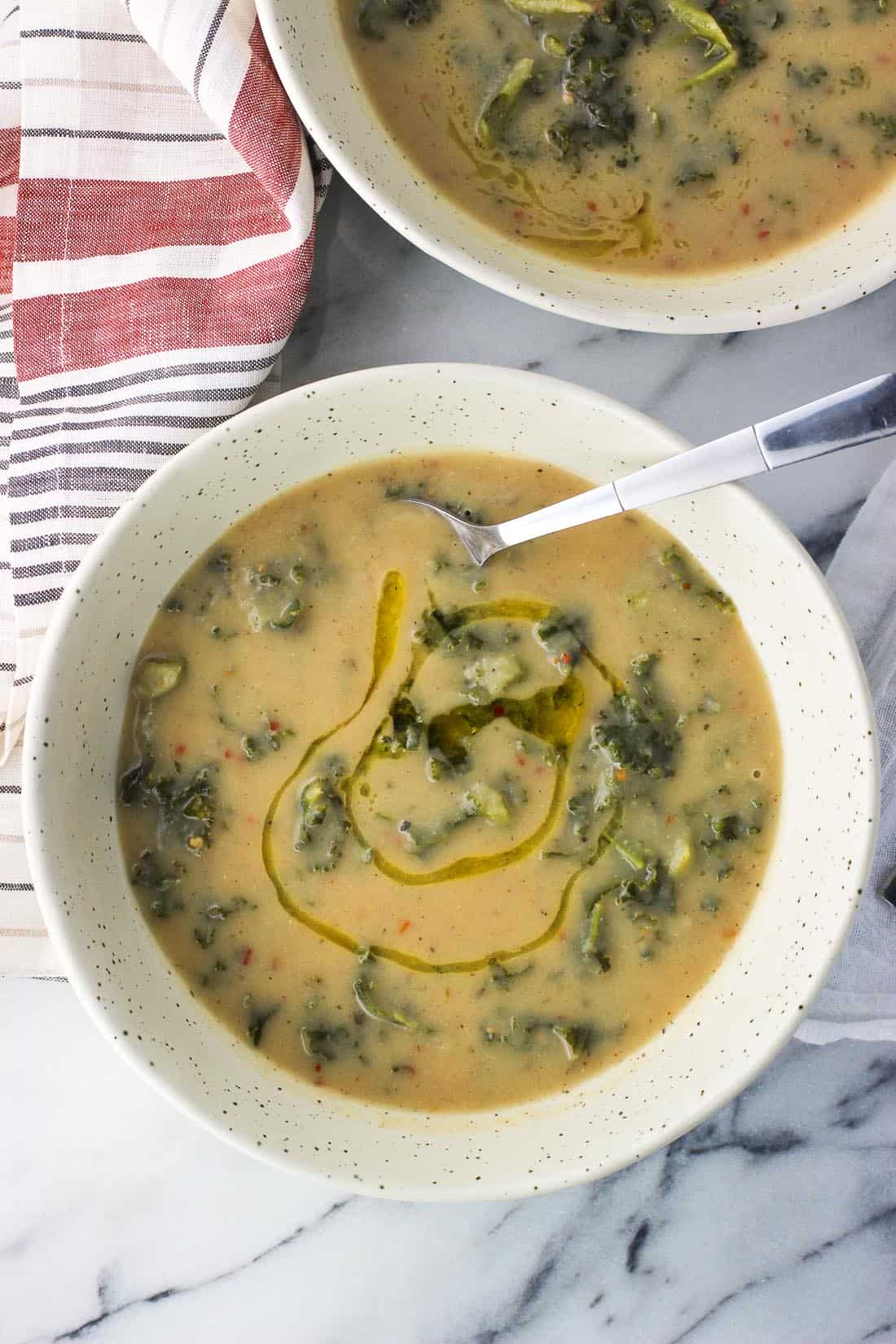 Soup season is HERE. Rather, it’s here most of the time. The temperature here in middle Tennessee has a tendency to swing from days of below-freezing to close to 70°F all within the course of a week. Currently we’re on an upswing, but that doesn’t mean I won’t be bundled to the hilt by week’s end.

Regardless of the temperature outside though, soup is a welcome dinner any time, any place. I subscribe to the notion that ice cream can certainly be enjoyed in the winter and soup is a year-round meal, but I held off on sharing this potato and white bean soup with kale for a liiiittle while until it was a little more socially-acceptable.

We love this soup for many reasons. It’s thick and creamy but fairly lightened up all the same. It’s dairy-free and can easily be made vegan, and is the perfect canvas for a variety of different seasonings and flavors for you to make it your own. Plus it features my *favorite* tip for adding extra nutrition to a soup or dip – sneaky beans! 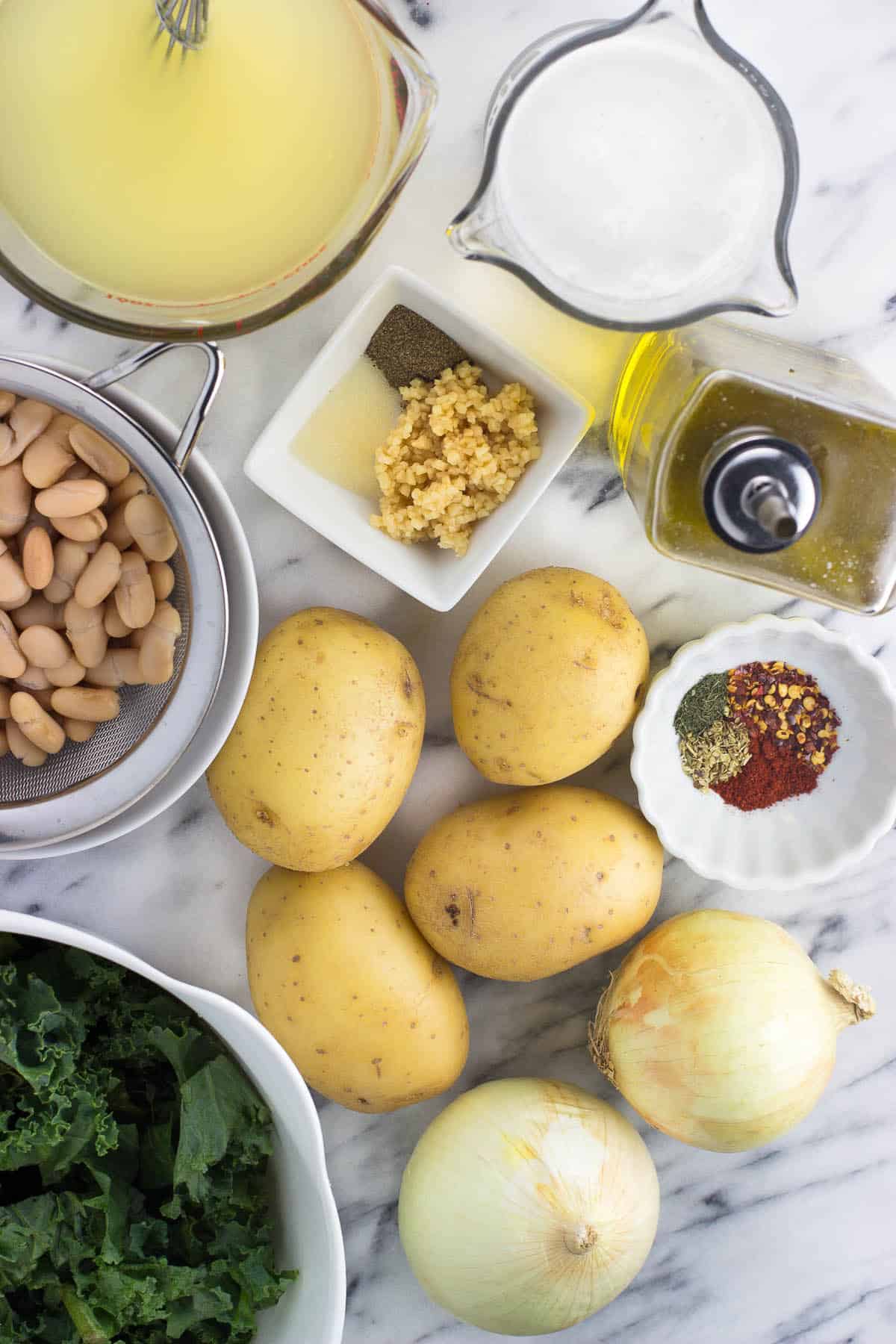 At its base, this potato and white bean soup features broth, potatoes, onions, garlic, and cannellini beans.

A trick to thicken soups in a healthy way is to puree everything including the vegetables part-way through the recipe, and then add additional broth, water, or milk to thin the soup to your liking. Pureed into this soup are a pound of potatoes, lots of garlic, two onions, and a whole can of cannellini beans. Who would know all that goodness is hidden away in this soup?

I’ve cooked and pureed potatoes into soups before, but adding white beans was a new thing this go around. They add a very small amount to the flavor here, but go virtually unnoticeable once blended.

One can of cannellini beans adds approximately 18 grams of fiber and 21 grams of protein to this soup’s liquid, along with various vitamins and nutrients, making this a sneaky, healthy addition to this potato and white bean soup.

As for the broth I like to use reduced-sodium chicken broth (it’s what I have on hand the most), but vegetable stock can easily be substituted in to make this soup vegetarian/vegan. And for milk, I recommend either almond milk or coconut milk. I’ve used both in this soup and they’re equally good. If going the almond milk route, just be sure the kind you use is both unflavored and unsweetened. Added sweetness wouldn’t be a good thing for this ultra savory soup.

What’s left to discuss is the kale (adds a nice boost and variation!) and the seasonings. You can really take this soup in whichever direction you like with the herbs and seasonings, but the kind I usually use are written in the recipe card below. Salt, pepper, crushed red pepper, oregano, paprika, and dill. A little of this and a little of that from my pantry. 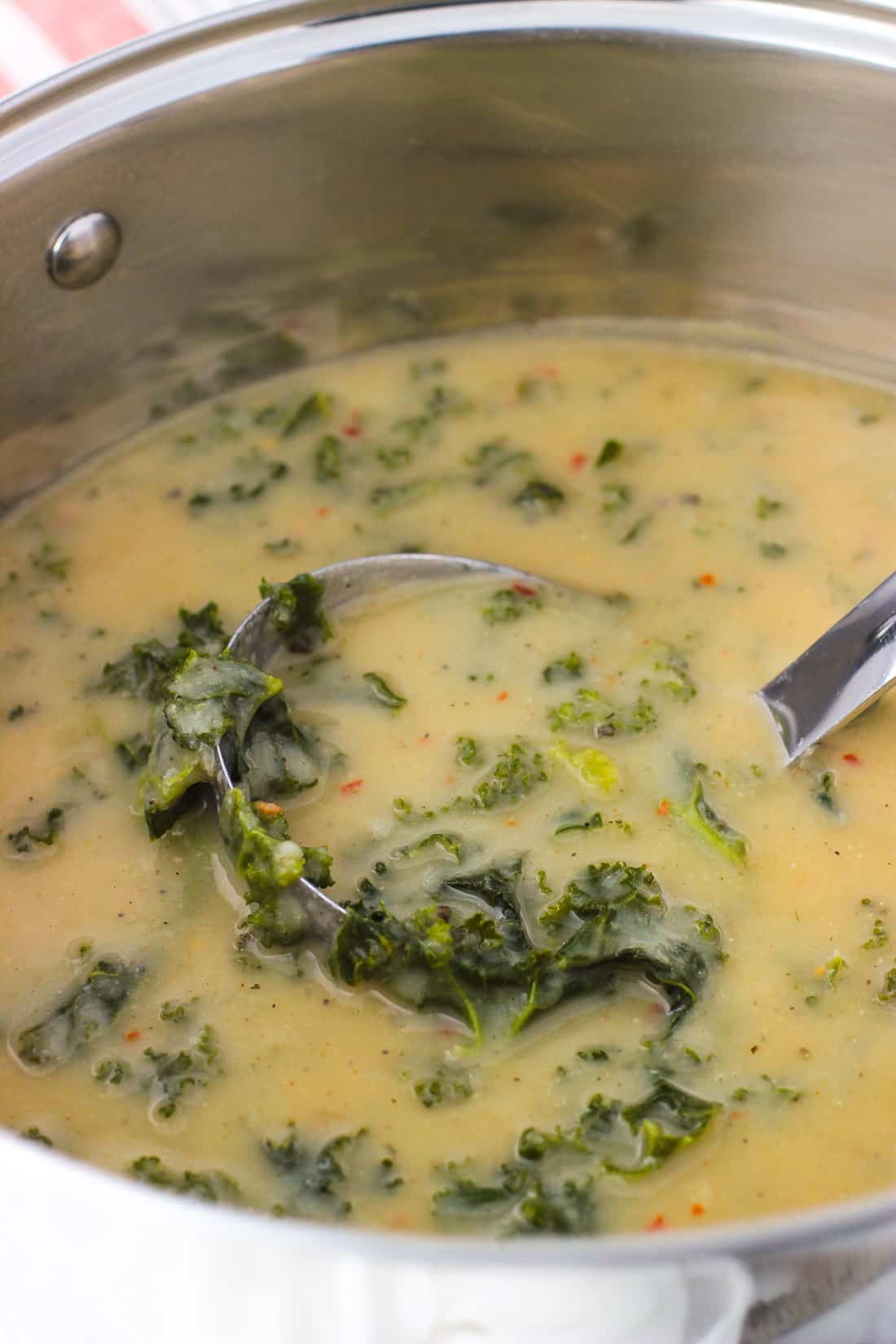 My first step to this potato and white bean soup is always to prep all of the ingredients. Rinse and drain the cannellini beans, chop up the onions, peel and chop the potatoes, and press the garlic. This way things go more smoothly once everything gets underway.

Once prepped, start sauteing the onions, potatoes, garlic, salt, and pepper in olive oil until the potatoes become partly tender. Then pour in about half of the broth and let the potatoes cook for another 7-8 minutes.

In go the beans for a few minutes, and then it’s time to blend. Using an immersion blender is for sure the easier way to go here, but if you don’t have one you can use a regular blender. Just please be careful transferring the hot soup to the blender, and blend in batches with sufficient excess room so hot soup doesn’t splatter out.

At this stage, transfer the soup back to the pot, add in the rest of the broth, and stir in whichever kind of milk you’re using. Now you have the flexibility to season to your taste. The good thing with soups is that you can taste as you go and make adjustments. 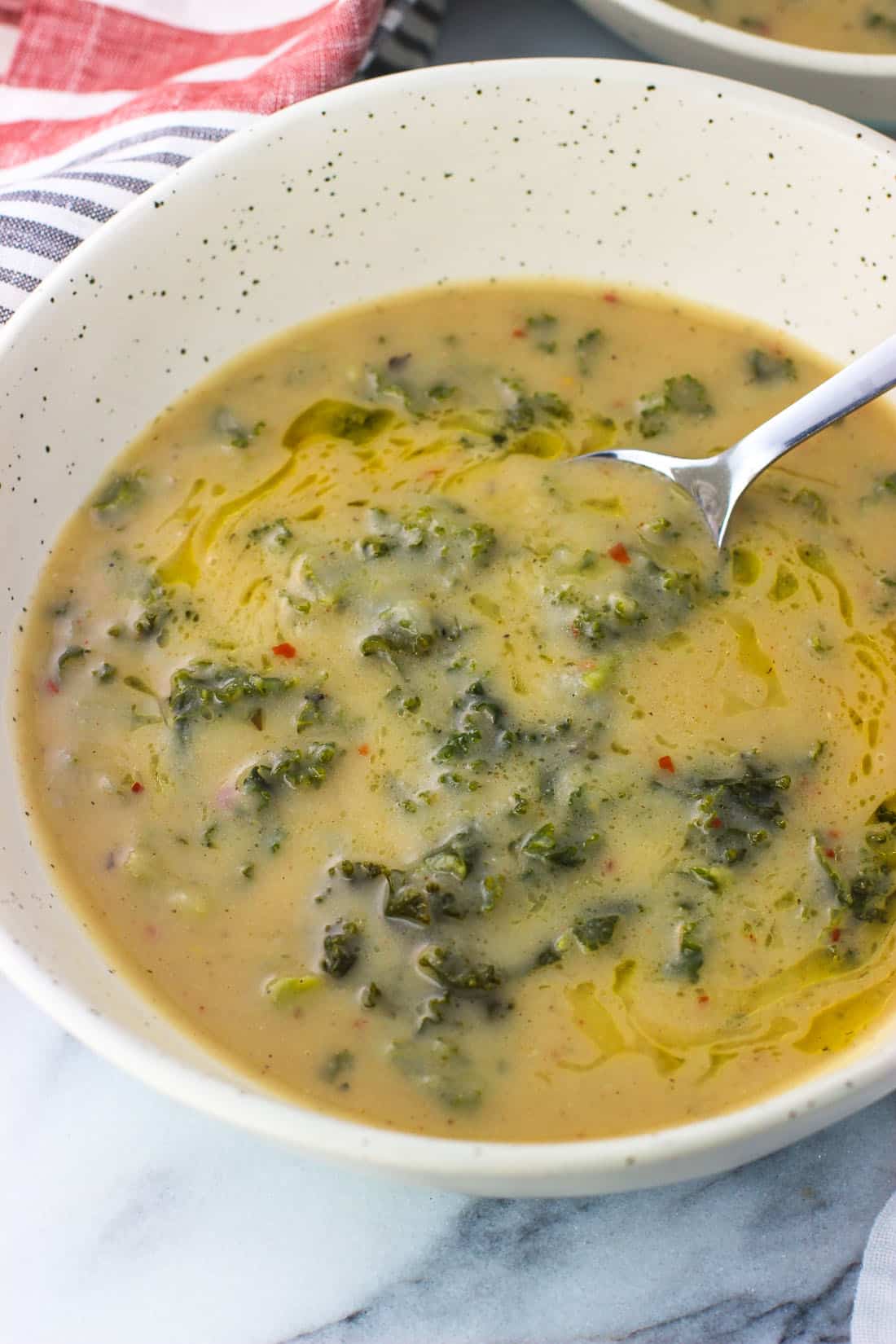 All that’s left is to add the kale and let it wilt for a few minutes, and you’re all set. It brings a heartiness and some chew to this pureed potato and white bean soup that’s definitely welcome.

For an extra special serving tip, I highly recommend drizzling extra-virgin olive oil over top of the soup once it’s ladled out into bowls. Stirring it into the finished soup results in little flavor bursts in each spoonful that made a simple, healthy bowl of soup feel a lot more gourmet.

For another healthy pureed soup recipe, it’s hard to beat creamy celery soup. One whole bunch of celery (!) gets blended into this creamy soup (that’s made without cream). This soup tastes fancier than the ingredients might suggest!

Roasted butternut squash soup is another pureed soup that features cozy ingredients that get nice and roasted before blending into soup. Fresh herbs like rosemary, thyme, or sage are perfect flavor complements.

One more for your blender! This recipe for healthy potato leek soup adds in orzo at the end of the cook time for some heft and chew. There’s lots of garlic in here, too. 😉 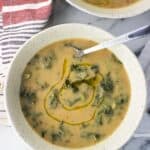 Milk: Both almond milk and coconut milk work well here. Just be sure the kind of almond milk you have is not only unflavored, but unsweetened as well. Added sweetness won't mesh well with this savory soup. Broth: Using vegetable broth instead of chicken will make this soup vegetarian/vegan. Greens: Fresh spinach can be used instead of kale. If going that route, it needs less time to wilt so add it at the very end. Nutrition: Nutritional info doesn't include extra olive oil for drizzling.