Creamy celery soup is a delicious and healthy “cream of” soup recipe that uses one whole bunch of celery. It’s easy to make and tastes fancier than the sum of its parts!

This spring I’ve been doing an every-two-weeks produce delivery service that sends an assortment of imperfect but wholly edible fruits and vegetables. I love it!

Three deliveries in a row now I’ve received a bunch of celery. Since we’re not huge ants on a log eaters and most of our soup repertoire (like Italian sausage soup – yum) only uses a rib or two, we’ve developed a backlog of celery.

What to make? There’s only one thing I could think of that would use up a lot at once – celery soup. Normally you think of cream of celery soup, but since my version doesn’t use cream, it didn’t seem right.

So how about a big pot of creamy celery soup?

Preventing Yogurt from Curdling in Soup

Yogurt runs the risk of curdling, becoming grainy, or otherwise unpleasant if it’s added directly into hot soup. To prevent this, reserve a ladle or two of the broth before blending the soup and whisk the yogurt into this small amount of liquid until it’s smooth.

Drizzle this combined broth/yogurt mixture into the soup pot and you shouldn’t have any problems. 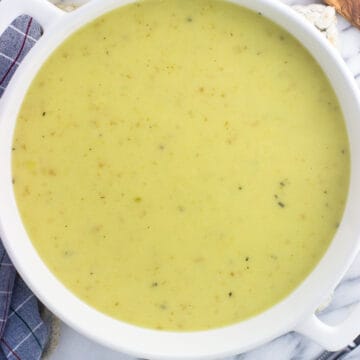 Ingredient Notes Potatoes: Yellow/Yukon gold potatoes have a slight edge over Russet potatoes as they end up a little creamier when blended in a soup, though Russets are perfectly fine to use here, too. Greek Yogurt: Whole milk/Full-fat (5% or so) is recommended for a little boost in this healthy creamy soup, though lower fat varieties (2%) can also work. I don’t recommend nonfat. Sage: Finely diced fresh sage can be used in place of the rubbed sage if that is what you have on hand. I’d start with 3/4 teaspoon of diced fresh sage and see if you’d like to add more. Ground sage is more concentrated in flavor than both fresh and rubbed sage so you would need less. Start with 1/8 teaspoon of ground sage if using. Recipe Tips