This healthy potato leek soup with orzo is thick and creamy without cream - or even milk! Orzo gets added to the soup near the end of cooking for a hearty addition to this easy soup recipe.

Creamy yet healthy potato soup isn't anything new around here, as this potato and white bean soup has proven to be a reader favorite. It's one of my favorites, too.

So here's another: healthy potato leek soup. Outside of this soup, I only really cook with leeks when making a seriously good creamed leeks side dish (made with less cream than is traditional). Here though they add a mellower onion-ish flavor that pairs wonderfully with potatoes, broth, and simple spices in a lighter dish.

And that "mellower" descriptor is a good thing. Despite looking like massive green onions (they’re in the same plant family), leeks have a milder flavor. Which is good, because have you ever added too many green onion slices to something? Whoo boy. 😝

Getting the leeks ready to cook takes up the majority of the prep time, but is necessary due to their dense layers that can hide bits of dirt.

Lifting out the leeks (versus pouring everything out through a strainer) helps ensure the dirt remains settled on the bottom of the bowl and doesn't make its way into the pot with the sliced leeks.

How long will potato and leek soup keep in the fridge?

Leftover soup portions will stay in the refrigerator for up to 4 days. If you know you'll have more beyond that, I recommend freezing excess portions as soon as possible to retain the most freshness.

Yes it does! Transfer soup to an air-tight container or bag before freezing up to 4-5 months.

How do you make potato soup less thick?

Leftover portions of soup will thicken up in the fridge. If you'd like a thinner soup, stir in a small amount of broth or water when reheating until it reaches your desired consistency.

Crostini are baguette slices brushed with olive oil and baked until crisp. They make a wonderful pairing with this healthy potato leek soup, especially with spread with roasted garlic cloves (as seen in these photos)!

Kale caesar salad, made with a better-for-you Greek yogurt-based dressing, is a leafy green side with a bump of nutrition.

For something to garnish the soup itself, homemade croutons are always a big hit, as is a drizzle of extra-virgin olive oil right over the soup itself.

Thick, creamy, yet healthy soups are some of my favorites to make at home -- there are so many different ways to take them flavor-wise! 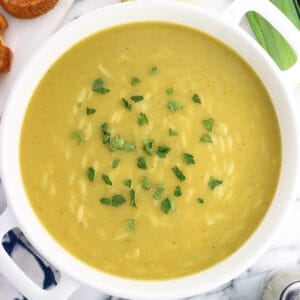 Ingredient Notes Leeks: Choose leeks with the largest white and light green segments as those are the areas you slice and cook with. Broth: Chicken or vegetable broth would work well in this soup. All vegetable will keep this soup vegetarian. I've combined chicken/vegetable in one pot of soup to use up leftovers and it was delicious. Use whichever works for you. Potatoes: Yellow/gold potatoes are great as they lend and a richness, but Russet or whichever variety you like for soups work, too. Recipe Tips