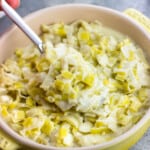 Creamed leeks is a simple side dish that tastes fancier than you might think! Leeks simmer in a mixture of broth and wine for tons of flavor, with just a small amount of cream tying it all together. This post also includes in-depth instructions on cleaning and preparing the leeks for cooking.

It took coming across an article about Julia Child's favorite soup (vichyssoise, allegedly) and Googling a few things ("what is vichyssoise", "how do you pronounce vichyssoise") to have a lightbulb moment that my leek repertoire started and ended with potato leek soup. With how much I like these long onion-esque vegetables, why didn't I cook them any other way?

So I got to work. After experimenting with sautéing sliced leeks and then adding liquid to simmer, I did more leek recipe research and realized I'd landed pretty close to a general creamed leeks recipe, minus the cream.

Turns out a small amount of cream was the missing ingredient from my fairly basic first attempts at a leek side dish. It immediately ups the sophistication level and frankly turns a simple dish into something worthy of a holiday dinner side.

This recipe can be boiled down to two main parts: cleaning the leeks and preparing the final dish.

Much of the edible portion of a leek remains underground while growing, leading to lots of soil, rock, and sandy particles becoming trapped within its layers. Hence, leeks needing a thorough wash before cooking. Simply rinsing a whole leek isn't going to do it.

Can you make creamed leeks ahead of time?

While they're the creamiest when prepared fresh, you can make creamed leeks 1-2 days ahead of time. Keep them refrigerated in an air-tight container. Prior to serving, heat them on the stovetop over low heat with an extra drizzle of cream if needed.

How do you serve creamed leeks?

Fresh thyme would be a nice garnish if you'd like an herb-y element. And beyond a straight-up side dish, creamed leeks are also good served as a bed under something, such as fish or chicken. 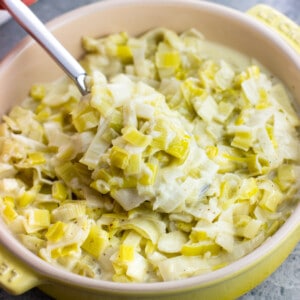 Creamed leeks is a simple side dish that tastes fancier than you might think! Leeks simmer in a mixture of broth and wine for tons of flavor, with just a small amount of cream tying it all together. This post also includes in-depth instructions on cleaning and preparing the leeks for cooking.
No ratings yet
Print Pin Rate
Course: Side Dish
Cuisine: American/French
Prep Time: 14 minutes
Cook Time: 22 minutes
Total Time: 36 minutes
Servings: 3
Calories: 167kcal
Author: Alyssa

Leeks: Choose leeks with the largest white and light green segments (the edible part) you can find so you can buy less of them. Wine: A dry (less sweet) variety works well, such as Chardonnay, Pinot Grigio, or Sauvignon Blanc. Cream: This contains a fat percentage between 36-40%. Tips and Tricks