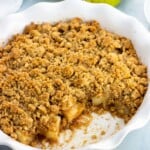 Even though I thought an apple crumble would satisfy this season's new crumb topping dessert, I wanted to sneak in one more version before fall ends. With how easy it is to switch out the fruit, the sky's just about the limit with crisps, crumbles, and cobblers.

When compared to its apple counterpart, this pear crumble features the same tried and true crumble layer and gooey spiced filling, with a few ingredient tweaks that complement the pear flavor extra well.

Tip: Fruit crumbles aren't finicky by nature, so the order of preparing the fruit or topping isn't critical. That said, making the crumble topping first and then refrigerating it until ready to use is a nice way to streamline preparation when you're ready to bake and ensure extra large and crisp crumbs.

Should pears be peeled before baking?

While not entirely necessary, I prefer the smoother, less chewy texture of this pear crumble when made with peeled pears. I recommend peeling them.

Do pears need to be ripe for baking?

For the best flavor, pears should be juuuuust underripe for baking. This means that they have a very slight give to them when pressed and are just shy of being of being ripe enough to eat raw as a snack. Too underripe and they will be very hard and lack flavor, while overly ripe pears will mush up and fall apart once baked.

Can you make parts of this recipe ahead of time?

Can I freeze pear crumble?

Yes, it can be frozen either before or after baking. My preference is to freeze it before so you don't have to worry about the topping overly browning when reheating. I recommend thawing the frozen, unbaked pear crisp in the refrigerator overnight so adjustments don't have to be made for the bake time. 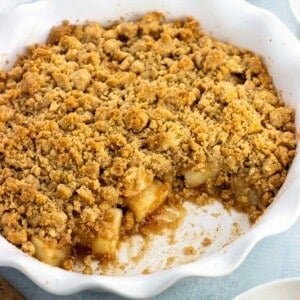 Pears: Slightly underripe pears will have a very slight give when you squeeze them. Too underripe pears are completely hard and will lack flavor, while overly ripe pears that are easy to indent will mush and fall apart when baked. Order of Operations: To streamline preparation, I will often first prepare the crumb topping ahead of time and refrigerate it until ready to assemble and bake. Briefly leave it out at room temperature if it hardens too much to easily handle after being chilled. This is also helpful if you'd like to form really big crumbs. Make-Ahead Tips: Beyond prepping the topping ahead of time as mentioned above, you can assemble the whole pear crumble, cover it, then refrigerate for 1-2 days before baking. It can also be frozen in this manner for several months. Nutrition: This is an estimate for the pears and crumble, not ice cream or whatever else you'd like to serve it with.