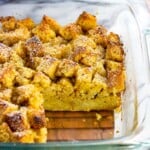 Repurpose leftover cornbread into breakfast for a crowd with this EASY baked cornbread french toast. No need for individual flipping! This simple recipe is sweetened with maple syrup and doesn't require a long soak time.

I baked my honey cornbread three times in the week I finalized that recipe and took photos. With a household of two, it's safe to say I contemplated different ways to use up leftover cornbread quite a bit!

Cornbread croutons have long been a favorite for repurposing an odd two or three leftover slices, but I was dealing with volume this time and didn't need a mountain of croutons.

With baked panettone french toast in mind, I took that simple framework of milk, eggs, and maple syrup and applied it to leftover cornbread for a fun and festive breakfast perfect for after Thanksgiving. 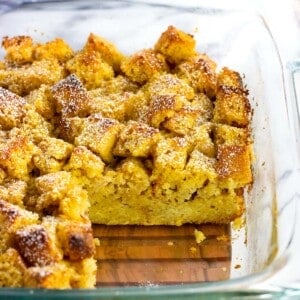 Cornbread: This recipe was tested with a more "Northern" style honey cornbread, one that includes one-third cup of honey in its batter. It has not been tested with a Southern-type cornbread which tends to be much crumblier with very little to no added sweetener. If using Southern cornbread this may work, but you likely would have to bump up the maple syrup considerably and/or add sugar. Maple Syrup:  If your cornbread is not that sweet (or if you'd prefer a french toast bake on the sweeter side), you may consider increasing the maple syrup, up to doubling it, or adding a few tablespoons of sugar to the milk and egg mixture.