Golden brown challah french toast is a big treat in the mornings. This rich, dense bread makes the BEST french toast and perfectly soaks up a spiced and slightly sweetened custard.

If I had to guess, four out of five times french toast is made in my house it’s in the form of a bake. Tear the bread up, pour the ingredients in a pan, and bake. So easy.

While I can say that I prefer that way because it’s more hands-off, the truth is that I think real deal french toast is kind of tricky to make!

You want to ensure that your bread is sliced to the ideal thickness, that the slices soak enough to saturate but not become soggy, and that they cook at just the right temperature and for the right amount of time that they turn golden-brown (and not burnt-brown) with a fully-cooked center.

And unless you’re up for manning multiple large skillets at once, you’ll likely have to cook it in batches, which runs at odds against french toast’s preferred serving temperature of right-from-the-stovetop.

So, despite all that, why am I sharing a straight-up challah french toast recipe here, you might ask? Because when the right ingredients are chosen and certain tips and tricks are followed, the end result is WELL-worth the care involved.

Challah: A fairly rich, egg-based bread, challah is braided and baked into a fluffy, tender loaf. It has a fairly similar texture to brioche, though with a big difference. Challah is made dairy-free, as is important in the Jewish religion, while brioche is made with butter and milk. You can likely find a 16-ounce loaf of challah in the bakery section of a chain grocery store, as well as stand-alone bakeries.

Milk: There’s wiggle room in the 1-1/4 cup of milk. If you’d like a richer challah french toast, you can substitute in a portion of the milk for cream or half-and-half.

Orange marmalade: A hint of citrus flavor pairs wonderfully with everything else going on in the custard. Orange zest and a splash of orange juice will work, but I’ve taken to whisking two tablespoons or so of orange marmalade into the mixture. The little bits of preserved rind stick to the challah slices and add a very subtle flavor to tie it together (it isn’t strong).

Paying mind to a few areas in prepping and cooking challah french toast ensures you achieve a golden and perfectly cooked end result.

#1 – Use stale bread. One- or two- (or three-…) day-old bread works best for french toast as the slightly stale nature helps it better absorb the custard.

#2 – Cut slices 3/4-inch thick. One of the hallmarks of good french toast is a crisped exterior with a soft-but-not-squishy interior. Too thin challah slices can dry out while cooking and become tougher, while slices that are too thick may burn on the outside before the center gets a chance to cook sufficiently.

#3 – Don’t soak too long. Aim to soak your slices for one to two minutes max per side, then get them out of there! You want the bread to be wet throughout, of course, but the challah will continue absorbing the custard as long as it’s left in the mixture, which can lead to a super soggy slice.

#4 – Let the custard drip back in the dish. Lift out the soaked bread slices with a spatula (I actually use my fish spatula as it’s slotted) and hold them over the dish with the custard for a few seconds before transferring them to the hot skillet to cook. This allows the excess egg mixture to fall back into the dish for future batches, and minimizes the amount that pools around the slices in the skillet.

#5 – Don’t crowd the pan. You’ll want to use your largest skillet/pan to make french toast, and even still it’s likely that you’ll need to cook in batches. Aim to cook as many slices as your pan will allow in a single layer on the bottom surface of the pan, with a bit of room between them so they’re not touching. I always regret trying to sneak an extra slice in a batch, as the slices cook unevenly if they’re squished in, raised up against the curve on the side of the pan, etc.

#6 – Keep an eye on the temperature. I’ve had many stovetops in my life, both gas and electric, and know that one stove’s “medium” may not be the same as another’s. It’s a good starting point here, but be ready to adjust the heat lower if need be. Too-high of a temperature will result in an extra well-done exterior with an undercooked middle. The sweet spot for my current electric stovetop is more of a medium-low heat.

While it’s maybe not quite as good as freshly-cooked, leftover french toast slices can be refrigerated and then reheated, either in the microwave or in the oven. If going the oven route, use a low temperature and cover the baking dish with foil or a lid to prevent the french toast from drying out.

Is brioche or challah better for French toast?

Both eggy breads with similar textures, brioche tends to be richer as it’s made with butter and milk. As is traditional, challah is dairy-free.

Can I use brioche instead of challah?

Yes, brioche can be substituted in this recipe for challah.

What to serve with challah french toast?

Classic french toast toppings include additional maple syrup, a pat of butter, fresh berries, and/or a dusting of powdered sugar. To round out a nice brunch, homemade breakfast sausage makes a protein-packed pairing. 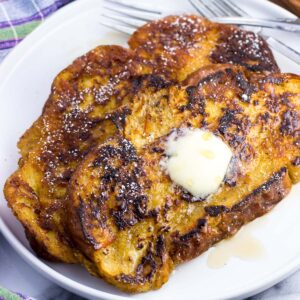 Ingredient Notes Challah: There should yield around twelve slices in a standard-sized challah loaf. Milk: You can sub in a small part of cream or half-and-half for some of the milk to make this french toast even richer. I like to use one cup milk and one-quarter cup cream when I have cream on hand.  Orange Marmalade: If you don’t have orange marmalade, you can use the zest and juice of one orange. Cooking Fat: You can use all butter if you prefer for cooking your french toast, just keep an extra close eye on the stovetop temperature. Butter has a lower smoke point than many oils like vegetable and canola, and can lead to a slightly smoky/excessively browned french toast situation. I like a blend of butter and neutral cooking oil to hedge against burning. Recipe Tips

P.S. Coming back to this challah french toast post from Pinterest or a saved link? You may recognize the photo below. I have updated this post (recipe, text, photos) in 2021 from its original publish date in October 2014.