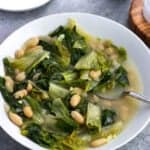 A simple Italian side dish, escarole and beans tastes fancier than the sum of its parts and the effort involved. This easy recipe features a silky Parmesan-enriched broth, lots of garlic, and perfectly tender escarole for a quasi-soup that's hearty, warming, and filling.

Not quite a soup and not quite greens straight-up, escarole and beans can accurately be described as a side dish MVP. A simple and flavorful Italian dish made with basic ingredients, it goes well with many main proteins as a side, a soup, or hearty bread topping. This is how I like to eat my greens.

The hardest part of this recipe just may be finding the escarole if your stores are as fickle with it as mine are. A staple in recipes like Italian wedding soup, this leafy green is heartier than spinach and has a slightly bitter flavor that holds its own alongside other ingredients beautifully.

Where can you buy escarole?

If your store has it in stock (it's not a guarantee at my regular grocery store) it'll be hiding among the lettuces on the produce shelves. It looks incredibly similar to green leaf lettuce, so check the label closely so you're buying the right thing.

What happens to the Parmesan in the broth?

The piece of Parmesan won't entirely melt into the broth. Rather it'll soften and pieces will puff up and break off. That's normal. After simmering, you can either remove the pieces from the broth and discard, or you can chop them into small bits. Add them back to the pan of escarole and beans, or simply enjoy as a snack! The pieces will be fairly sticky so use a sharp knife.

Can you freeze escarole and beans?

Cool and add escarole and beans to an air-tight container or zip-top freezer bag (press out excess air). Freeze for several months. 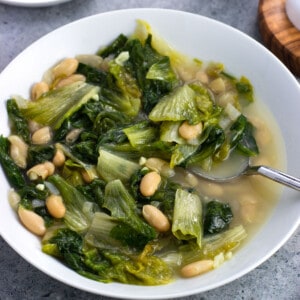 Escarole: You can find this among the lettuces in the produce department. Check the label carefully as they can be easily confused for one another. Parmesan: Use the a piece of the rind or just a whole piece from the wedge. Broth: Add more if you'd like more of a soupier dish. If doing so adjust the seasonings as needed. Recipe Tips