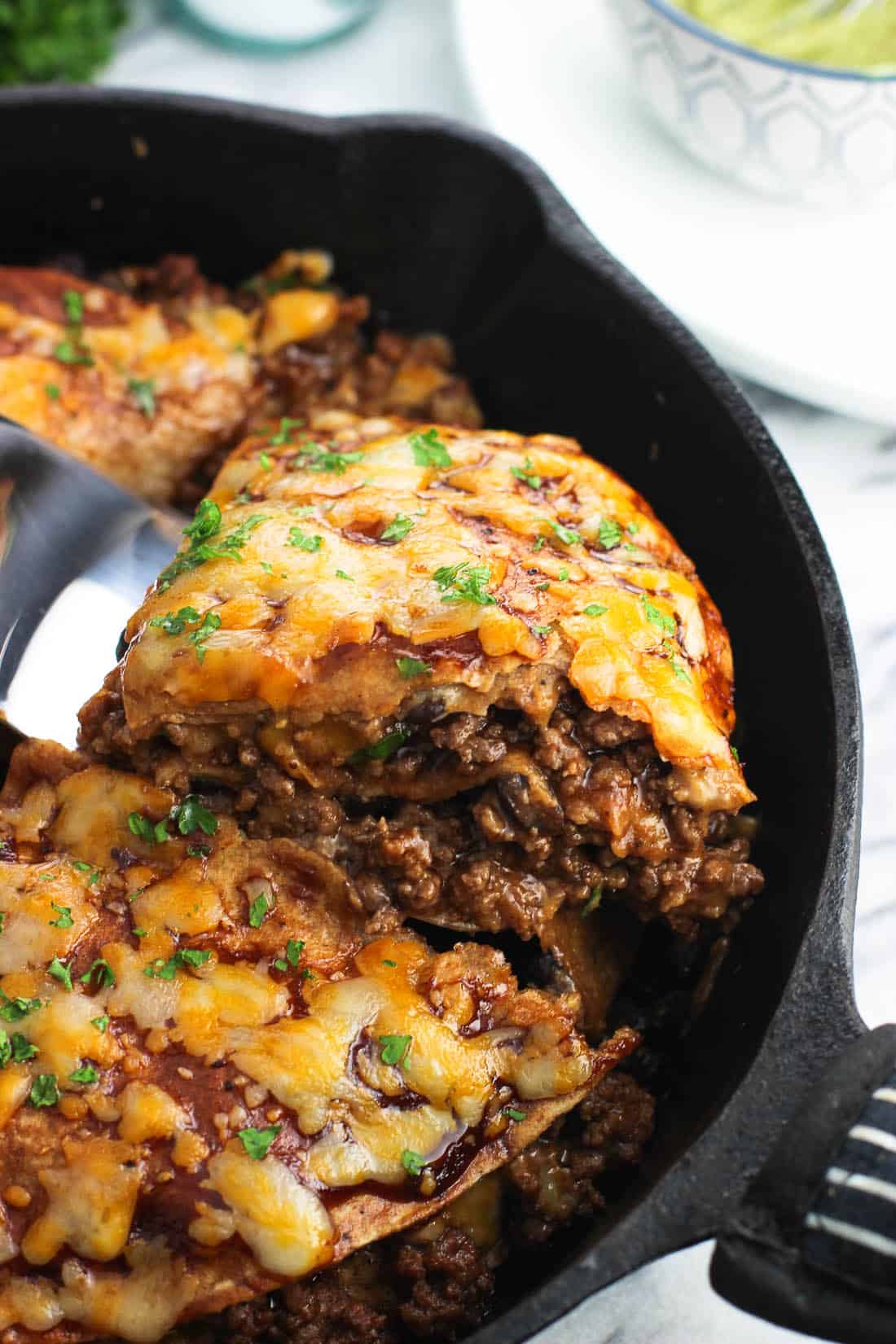 Recently I talked about super quick meals that are clutch for when your brain isn’t working, and got to thinking about others I keep in my back pocket.

Tortilla pies (or stacks, or whatever you want to call these…) are another versatile favorite of mine, especially buffalo chicken tortilla pie, which was actually one of my top 10 viewed recipes of 2016. Searching through my recipe archive, I couldn’t believe this BBQ beef tortilla pie wasn’t up on the blog yet — I could have sworn it was! With how often I make it, the fact that it flew under the radar was strange.

Obviously that needed to change, so in preparing this post, I sort of realized why it had never hit the primetime. It’s only five simple ingredients, pretty much all of which you can get a little loosey goosey with the measurements. So is it really worthy of its own blog post?

I’m saying a big Y-E-S, because beef, tortillas, black beans, BBQ sauce, and cheese come together to create a hearty, flavorful dish that tastes like there’s more to it going on than just five ingredients. A whole greater than the sum of its parts, if you will. 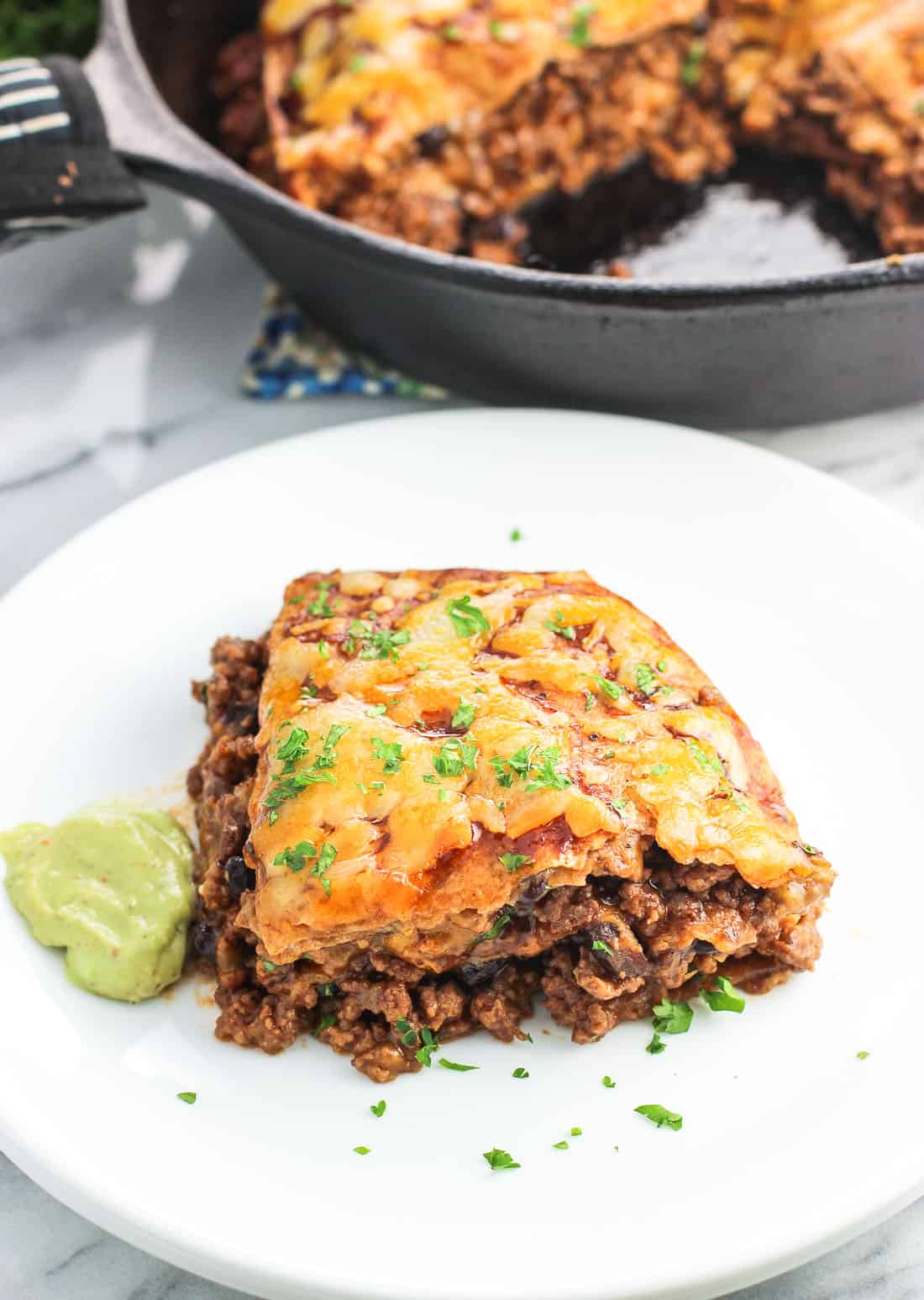 What’s to love about this recipe

Tortilla pies are quick and have straight-forward assembly: tortilla, sauce, meat, cheese, and repeat. End on a tortilla, and then cover the top with sauce and cheese. Since the meat is already cooked by the time of assembly, the whole shebang is popped in the oven for 10-15 minutes for the cheese to melt, and you’ve got dinner on the table. And a seriously good lunch for the following day or two…

The ingredients are also incredibly customizable. Basically whatever combination of meat, sauce, and cheese that sounds good to you would work in this format.

This is also a great recipe for adding a variety of vegetables, or leftover bits of this and that. Leftover sauteed kale, beans, squash, roasted sweet potatoes…it all works.

This basic recipe doesn’t require much explanation, but when has that ever stopped a food blogger from writing more vs. less on the Internet? 😉

First start by cooking the ground beef in a skillet. Once cooked, drain the fat off before adding the BBQ sauce so the meat mixture isn’t too greasy. Use your favorite BBQ sauce here because it brings a ton of flavor to the beef. 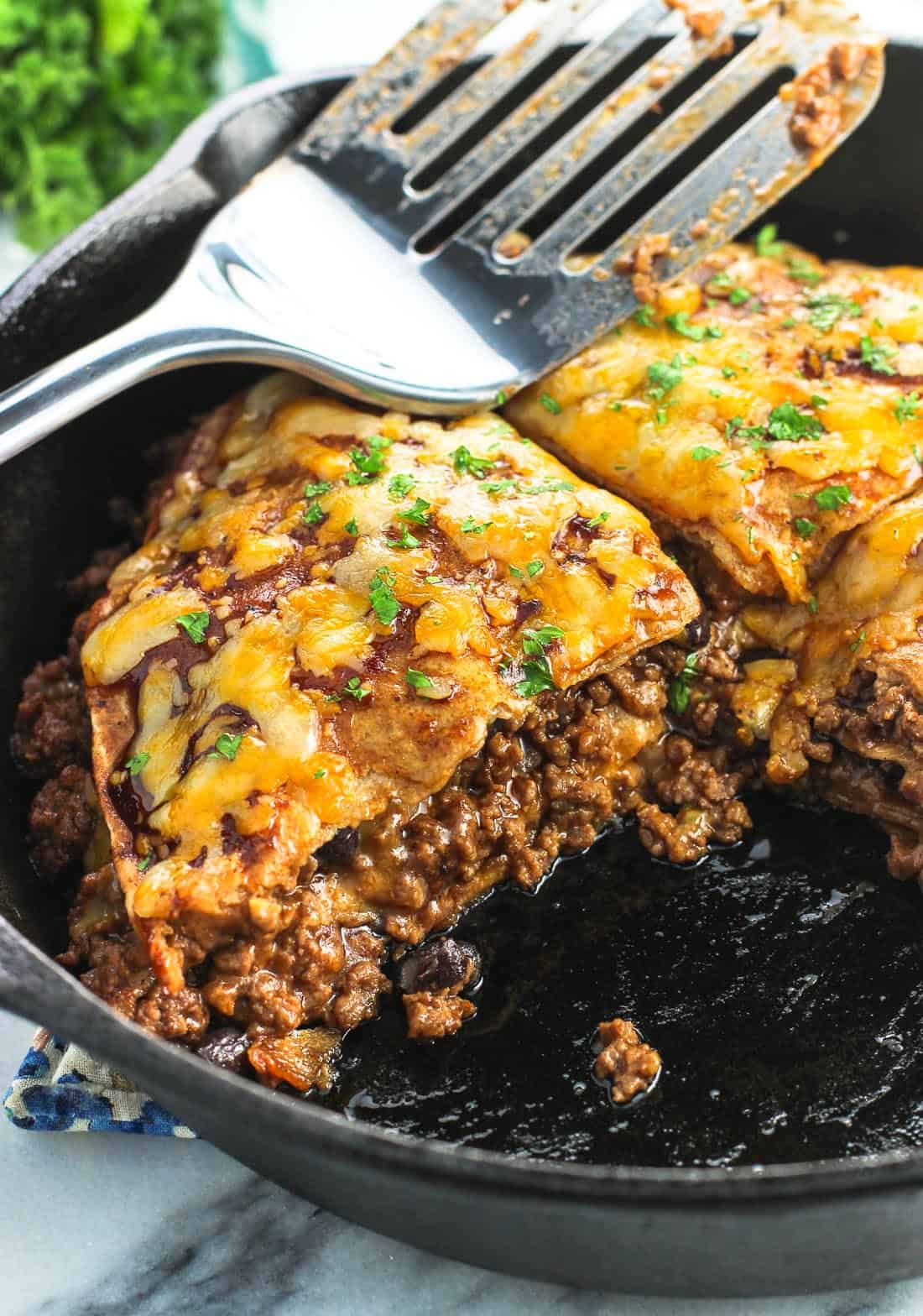 Now you’ll need three tortillas. I’ve used regular tortillas, but the tortillas you see in these photos are actually whole wheat! You really can’t taste a difference, so it’s an easy way to sneak in some extra nutrition.

Lay one tortilla in a baking dish, then brush BBQ sauce over top. Go right to the edges with the sauce to ensure the perimeter of the tortilla don’t dry one when this BBQ beef tortilla pie is baking. Top with half of the beef mixture, then add beans and cheese. Now brush both sides of the next tortilla with BBQ sauce and repeat until all of the ingredients are used.

After a quick spin in the oven to melt the cheese, you’re all ready to slice and serve. 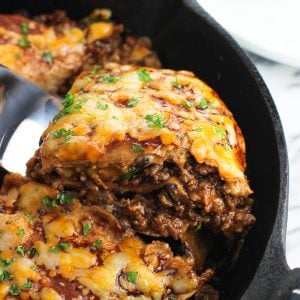 The ingredient quantities above are definitely customizable. I'd say anywhere between 1 - 1.5 lbs of ground beef will work just fine, along with however much BBQ sauce, beans, and cheese you'd like. Typically I don't measure when I make this dish, but I did this time for the sake of adding measurements to the recipe card. You do you, though!