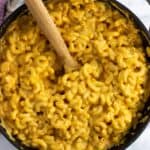 Golden and creamy, this pumpkin mac and cheese recipe is seasonal comfort food at its finest. A blend of three cheeses and a variety of herbs and spices make this main dish or side a crowd-pleaser.

Mac and cheese is a classic for a reason. It's hard to beat creamy, cheesy, carb-y goodness. You don't even need a stove top (illustrated by this recipe for Instant Pot mac and cheese).

And while you might not want to mess with a tried and true recipe, if ever you're feeling like a slight deviation from the original, may I suggest pumpkin macaroni and cheese?

Since some of the roux steps can be time-sensitive, I suggest prepping a few things before turning on the stove. I'll combine all of the dry spices beforehand so they're ready all at once, shred the cheeses, and then set a large pot of water to boil to get ready to cook the pasta.

I tested this recipe with two different methods: all on the stovetop (as it's written here) and finishing it baked in the oven.

Both were delicious, so it really comes down to personal preference. If you like your sauce the extra super creamy, then I suggest you serve this mac and cheese right from the pan as it's written here. Buuuut if you don't might losing a bit of creaminess to gain a crisp panko topping, then you might prefer finishing this in the oven. 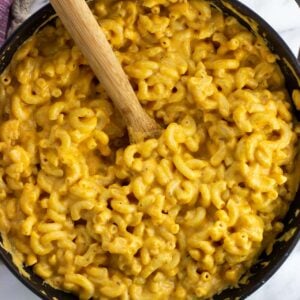 Ingredient Notes Cheeses: I would stick with extra-sharp cheddar for its bolder flavor, but you can switch up the other cheeses as you like. Other good options are Gruyere, gouda, havarti, mozzarella, or even a bit of cream cheese. Pumpkin: Make sure you're using pure pumpkin puree (not sweetened/spiced) and not canned pumpkin pie filling. The packaging on the cans can be deceiving! Herbs: Dried sage is more concentrated in flavor than rubbed sage. If using dried, I'd use somewhere between ¼ and ½ teaspoon. If using fresh herbs, I'd start with two teaspoons diced, adding more to taste, if desired, once everything is combined. Recipe Tips