A few substitutions to traditional rainbow cookies will have you ready for the Fourth of July or Memorial Day celebrations. These red white and blue rainbow cookies are layered with raspberry preserves and topped with white chocolate for a festive treat that will feed a crowd. 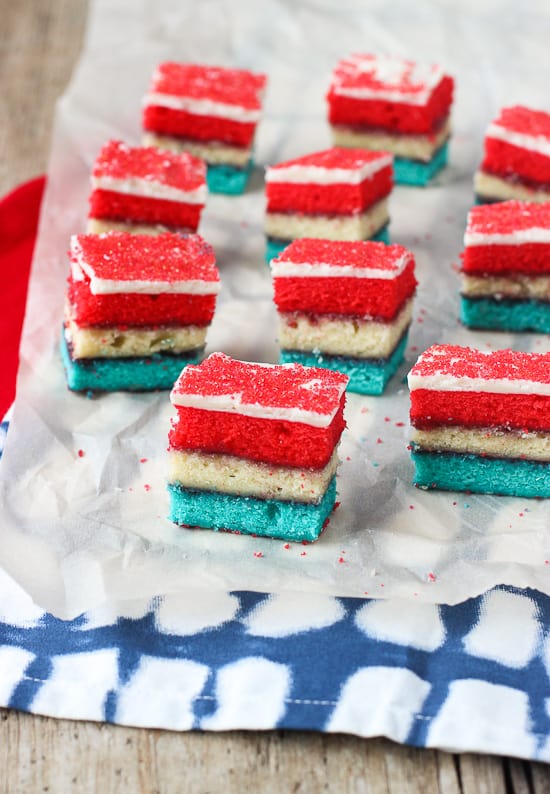 If you've been reading My Sequined Life for a little while, a) thank you! and b) you might have caught on that I have a thing for rainbow cookies.

They've been my hands-down favorite cookie for as long as I can remember. Something about their dense, spongy layers bursting with almond flavor, held together with raspberry preserves and covered in chocolate speaks to me big time.

When I was younger I'd request a rainbow cookie cake (a.k.a. one batch of rainbow cookies not cut into slices) for my birthdays, and would have an eagle eye for those precious rainbow cookies in an Italian bakery white-with-red-twine box of the BEST variety of cookies. 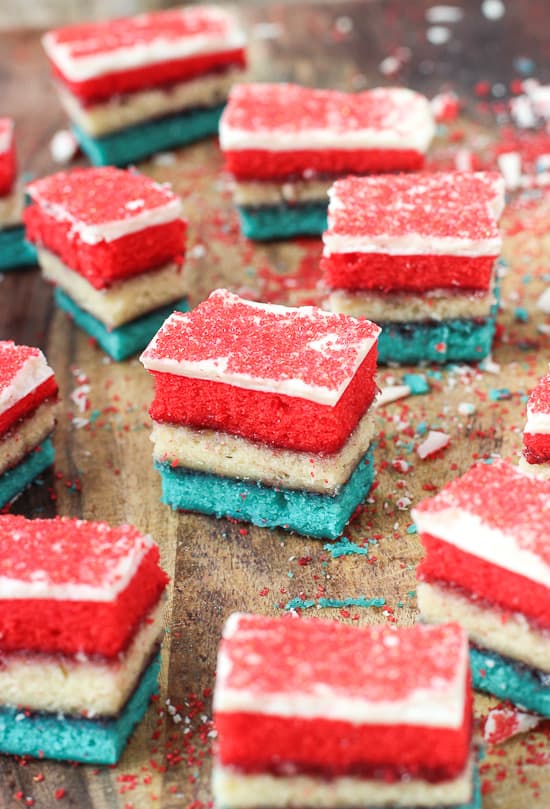 I will admit that rainbow cookies are not the quickest or easiest batch of cookies to make, but I find the end result worth the effort.

It also helps that a lot of the recipe time is inactive, and that each batch makes a ton of cookies. I seem to have fallen into the routine of making them for holidays (or, at least that's my excuse!), so I stick some in the freezer to nibble on in the months in between.

Just switching up the food coloring with red and blue sure is easy enough to amp up the festive factor, don't you think?

The procedure for these patriotic rainbow cookies is relatively straight-forward, though a little tedious.

You'll mix up the cookie batter and separate it into three bowls, two of which will be colored (with red and blue, respectively).

Each layer is baked and cooled, and then the real fun begins. Raspberry preserves are heated on the stove top and pressed through a strainer to remove the seeds. Alternatively I've seen these cookies made with apricot preserves, but I have a sweet spot for raspberry so that's what I used.

In all honesty I have skipped the straining step in the past and haven't found the seeds to be a problem at all. For this batch I strained, so you decide. Do whatever you're up to.

You'll invert the blue layer onto a baking sheet, and then spread half of the preserves over top. Next the white layer is inverted, then the remaining preserves, and then the red layer. After the cake spends some time in the refrigerator, I trimmed the sides into an even rectangle like this: 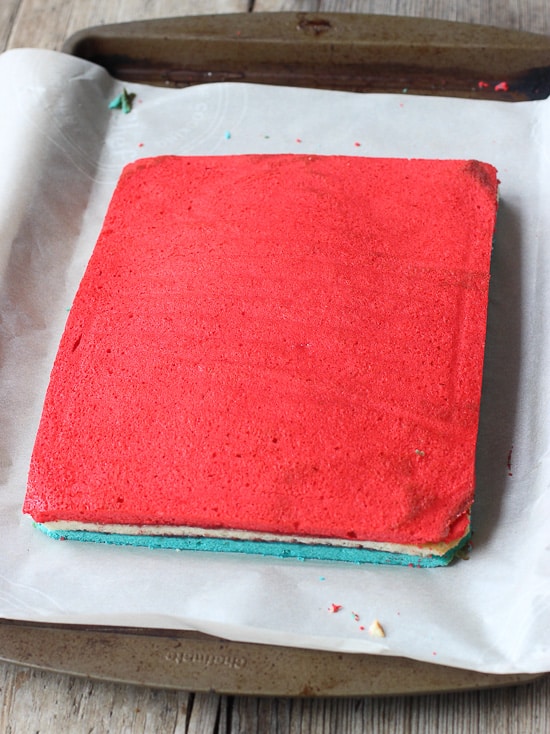 Then I hoovered the scraps. I'm surprised I didn't get those crumbs in the foreground. Then all that's left is to spread a layer of white chocolate over top and sprinkle with red sanding sugar or your preferred sprinkles, let harden, and then slice!

Cutting from the chocolate layer down sometimes will cause the chocolate to break unevenly. Does it impact the taste? No! But if you're bordering on type-A you'll be a little annoyed the edges aren't straight.

To combat this, I flip the cookie slab over (so the blue layer is on the top) and slice that way, giving the knife a nice, firm push when it hits the white chocolate layer, which is right next to the cutting board. This should provide cleaner slices.

Whichever way you slice it (literally), these delicious and patriotic cookies will brighten up your Fourth of July or Memorial Day dessert table.

P.S. If you're reading this recipe, you may be a big fan of almond-flavored cookies like I am. If so, do check out my classic pignoli cookies, which also uses almond paste. They're much less complicated to make. 😉 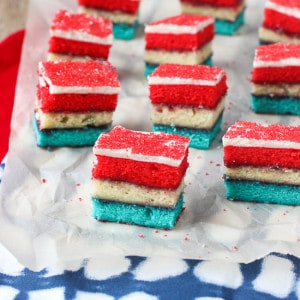 A few substitutions to traditional rainbow cookies will have you ready for the Fourth of July or Memorial Day celebrations. These patriotic red, white, and blue rainbow cookies are layered with raspberry preserves and topped with white chocolate for a festive treat that will feed a crowd.
No ratings yet
Print Pin Rate
Course: Cookies
Cuisine: American
Prep Time: 9 hours
Cook Time: 30 minutes
Total Time: 9 hours 30 minutes
Servings: 55
Calories: 128kcal
Author: Alyssa