This maple sausage gnocchi skillet comes together all in one pan for a relatively quick weeknight meal. No boiling is needed for the gnocchi, which are combined with sweet potato, maple sausage, and sage for a flavorful dinner recipe the whole family will love. 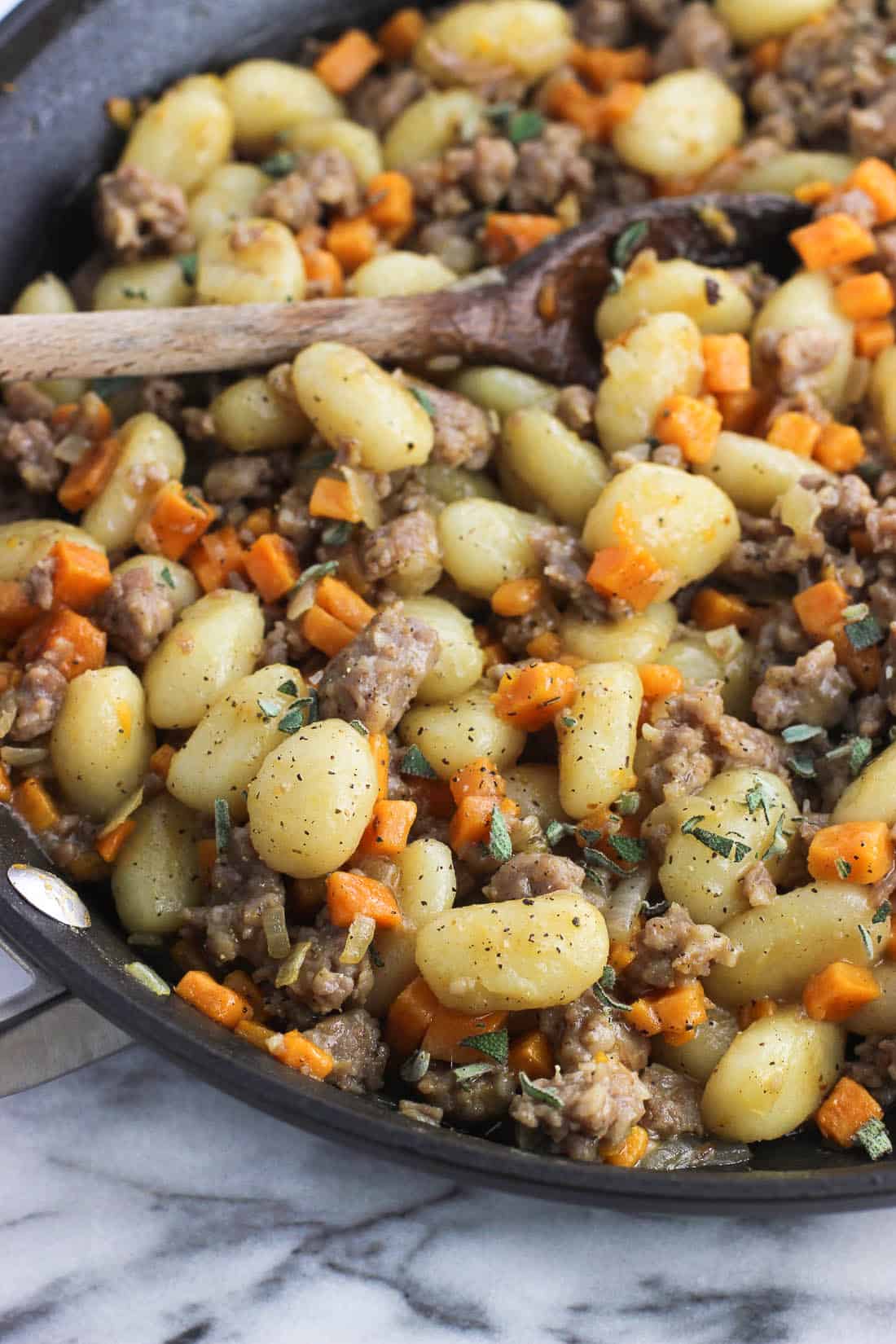 I think we all have those nights when we’re up for trying a new recipe and committed to following all the steps. And then there are those other nights when a little of this and a little of that get thrown together and fingers crossed it all works out.

This maple sausage gnocchi skillet started out as the latter, and then evolved into its current version below which has measurements and times — pretty important things for a proper recipe.

The little of this + that aspect of this gnocchi skillet actually began with a mistake. Or what I briefly thought was a mistake. Sausage and gnocchi together always works, and gnocchi with Italian sausage and homemade marinara makes an appearance on our dinner table pretty regularly.

We ended up loving the unlikely maple flavor along with the creamy gnocchi so much that this version, with a few tweaks, soon found its own place in our dinner rotation. 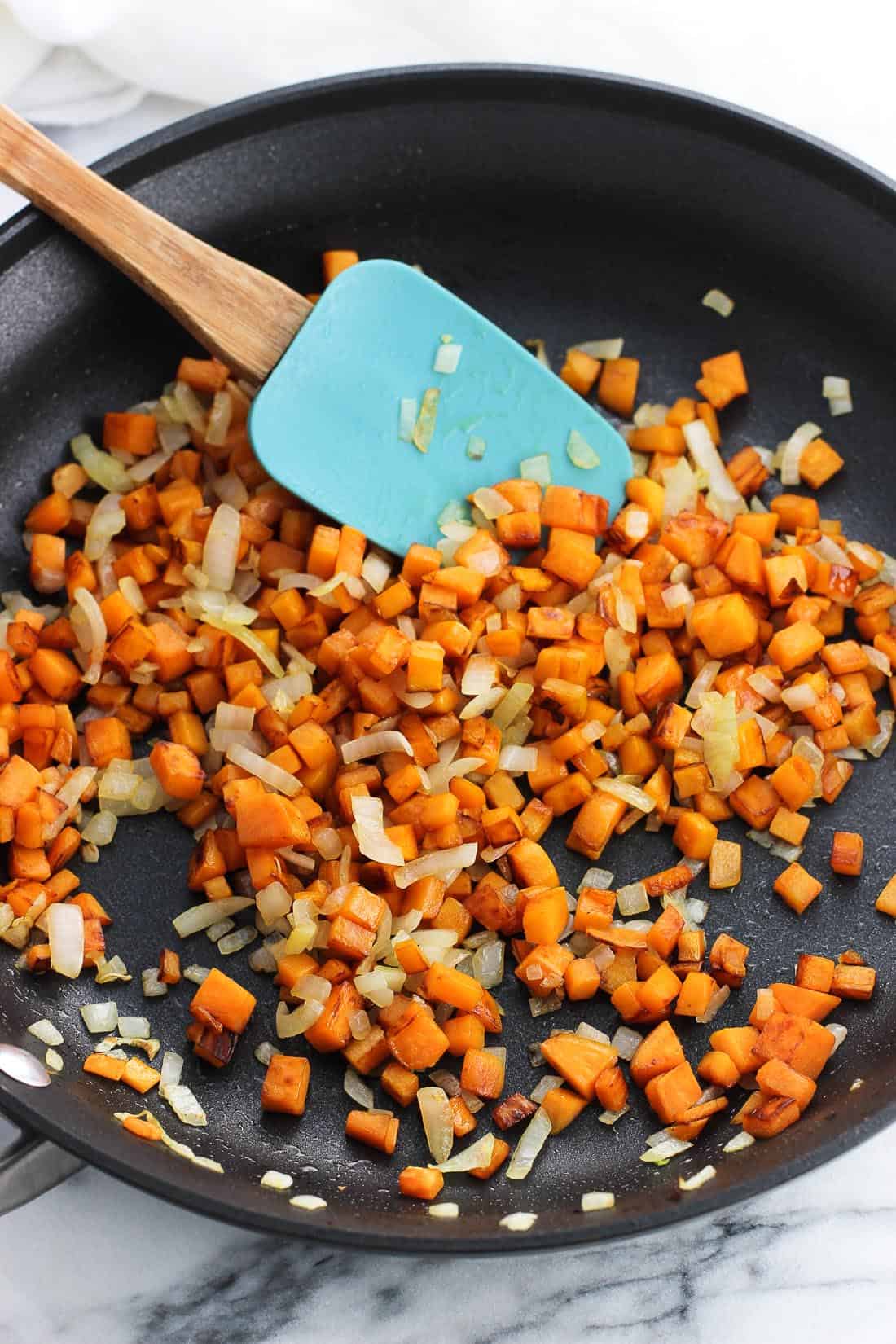 To keep things a little more free and easy, this recipe uses a general maple-flavored ground sausage instead of that particular maple chicken sausage variety and it works beautifully just as well. The key flavor here is the maple. Combined with the sage it makes this gnocchi skillet scream ‘comfort food’.

If you can’t find ground maple sausage, you can use sliced maple chicken/turkey sausage links, breakfast sausage, or whatever variety you can find at the store. There’s no additional maple flavoring to this gnocchi skillet, so the sausage brings all of the maple flavor.

One pound of meat pairs with one pound of gnocchi to provide a hearty base for the rest of the flavors. Diced sweet potato and rubbed sage round out the the warm and cozy vibe to this one pan meal.

Though you can’t really tell from the pictures, there are two cups of chicken broth added here that reduce to coat the gnocchi with an ultra satisfying creaminess that acts as all the sauce you need. It’s one of my favorite tricks to use when making pan-toasted gnocchi, from maple and sage flavors to more traditional Italian ones, like in my chicken parmesan gnocchi skillet. 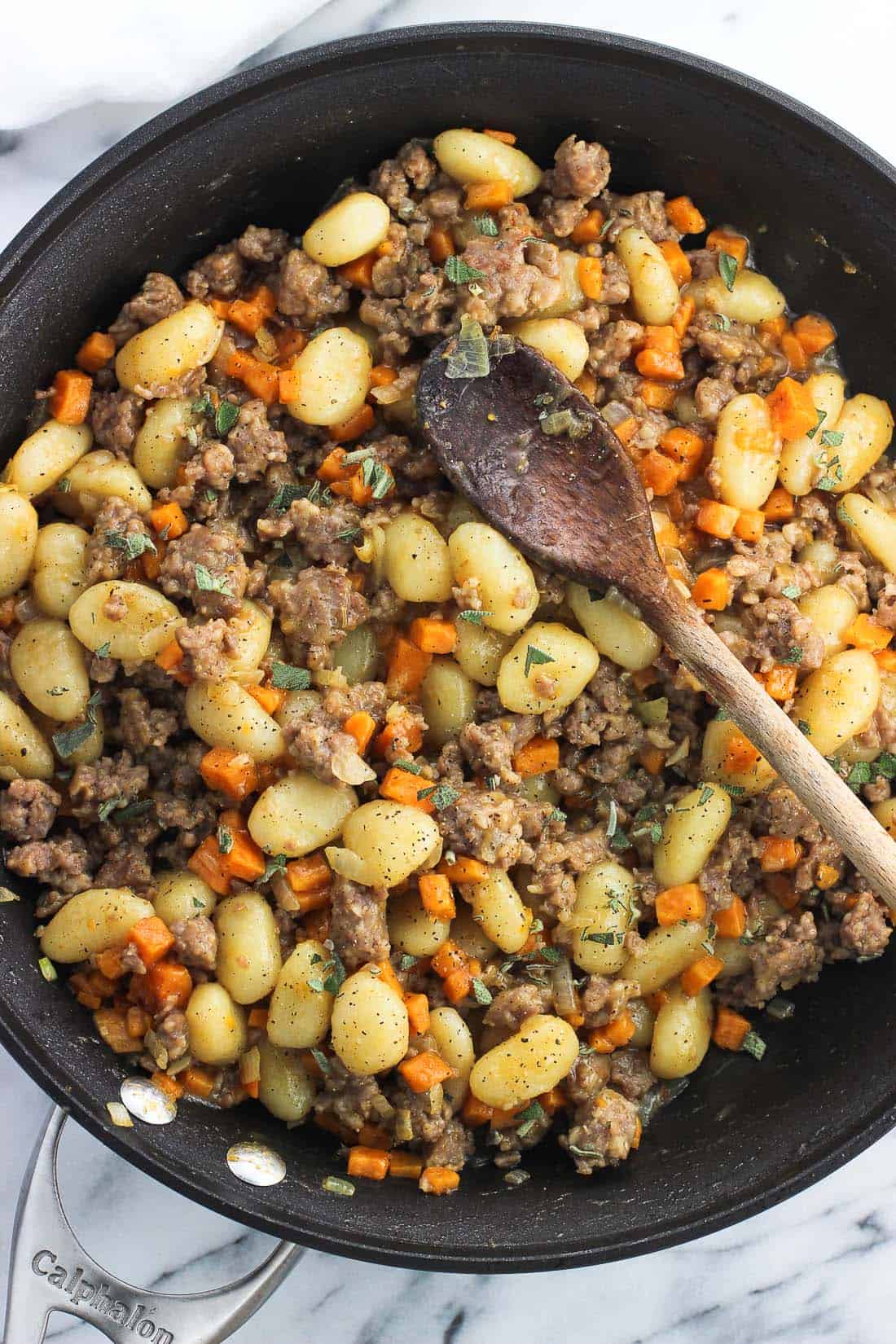 In the now empty skillet it’s time to cook the gnocchi. Pan-toasting gnocchi in a skillet (no boiling!) has become one of my favorite ways to prepare it. It cooks up golden-brown in eight or so minutes, with a reduction of simple chicken broth coating each one in a thick sauce, if you will, that tastes indulgent without cream or a ton of butter.

The broth will bubble up significantly when poured into the hot skillet. While this step isn’t super time-sensitive or anything, if the broth reduces too much and isn’t all that creamy, you can add another splash or two of broth and keep a closer eye as it reduces. I’ve done that one (or two, or…) times.

All that’s left is to add back in the sweet potato, onion, and sausage to the skillet right when the gnocchi are coated in your preferred amount of ‘sauce’, season with sage, salt, and pepper (or whatever other seasonings you like), and serve. 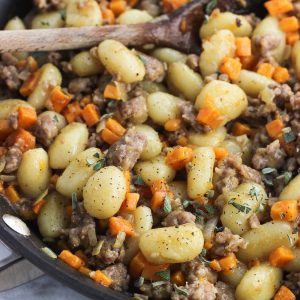 Sausage: Ground maple sausage can usually be found in the breakfast meats area of the grocery store, near the bacon. Other maple/breakfast meats can be used here in its place if you can't find it, including maple sausage links. Just slice them up and cook as required before continuing with the recipe. Gnocchi: The variety of gnocchi I use are made up of 80% potato, and are found in the dry pasta aisle. Sage: If you do not have rubbed sage, you can substitute 1/2 teaspoon of ground sage or 1 1/2 tablespoons of finely diced fresh sage. Start with those amounts and adjust as you see fit.