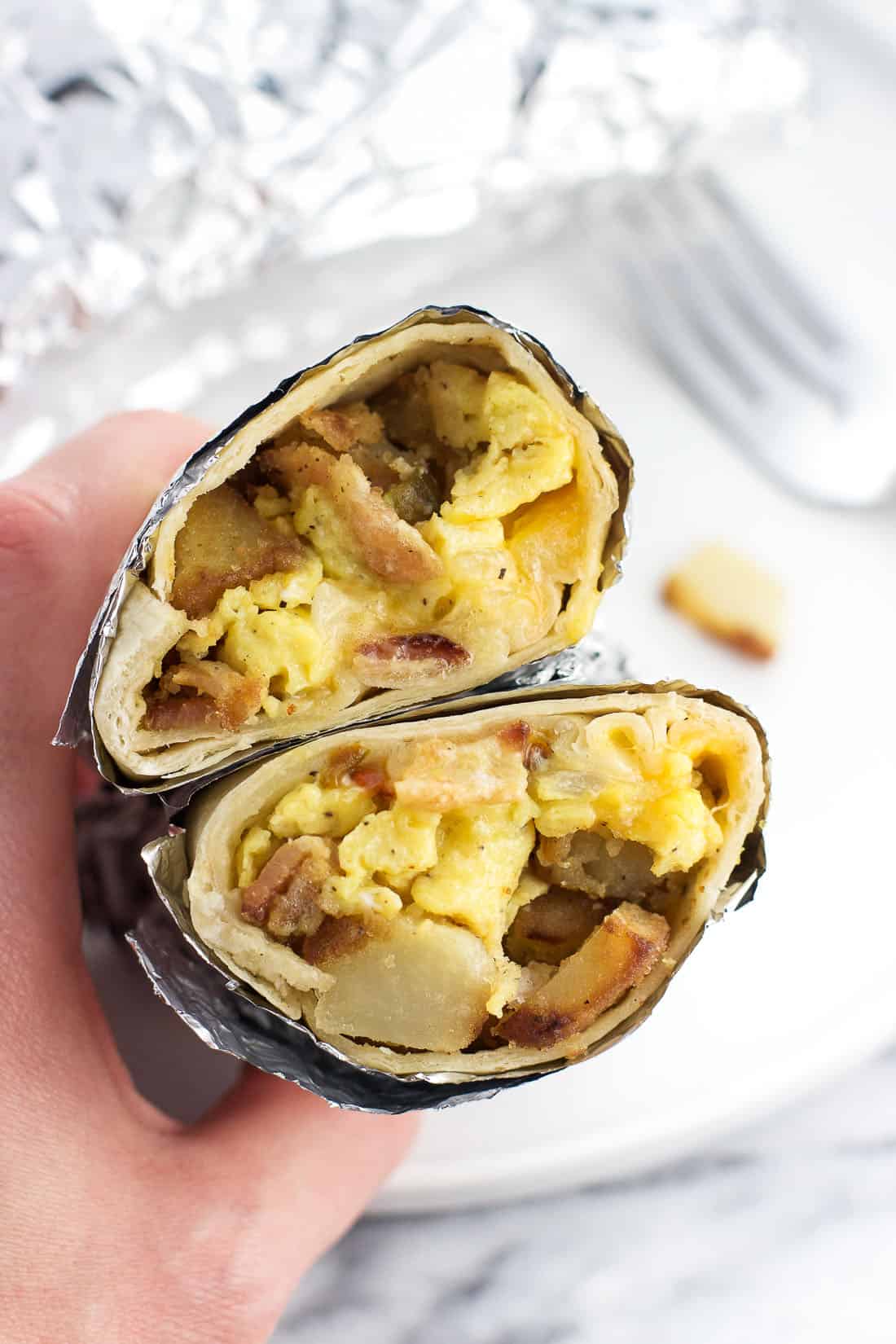 If there ever was a type of food that works for any meal of the day, I’d say it’s the breakfast burrito. Even though breakfast is in its name, its perfectly savory and customizable nature combined with its mix of carbs and protein makes it (in my opinion, of course) an awesome lunch or dinner, too.

I used to work near a taco shop that made some of the best breakfast burritos I’ve eaten. Sometimes the promise of walking down the street to get a breakfast burrito for lunch would be the only bright spot in my otherwise blah work day.

I no longer work there and have seriously considered driving back just to get a burrito. Thankfully good sense took over and I’ve since started recreating my old favorite.

Since it wouldn’t be time effective to make one burrito at a time, I prepped ten of these freezer breakfast burritos in an afternoon to have on hand for breakfasts, lunches, and dinners. Be sure to scroll down to learn how I reheat my breakfast burritos from frozen in just a few minutes time. 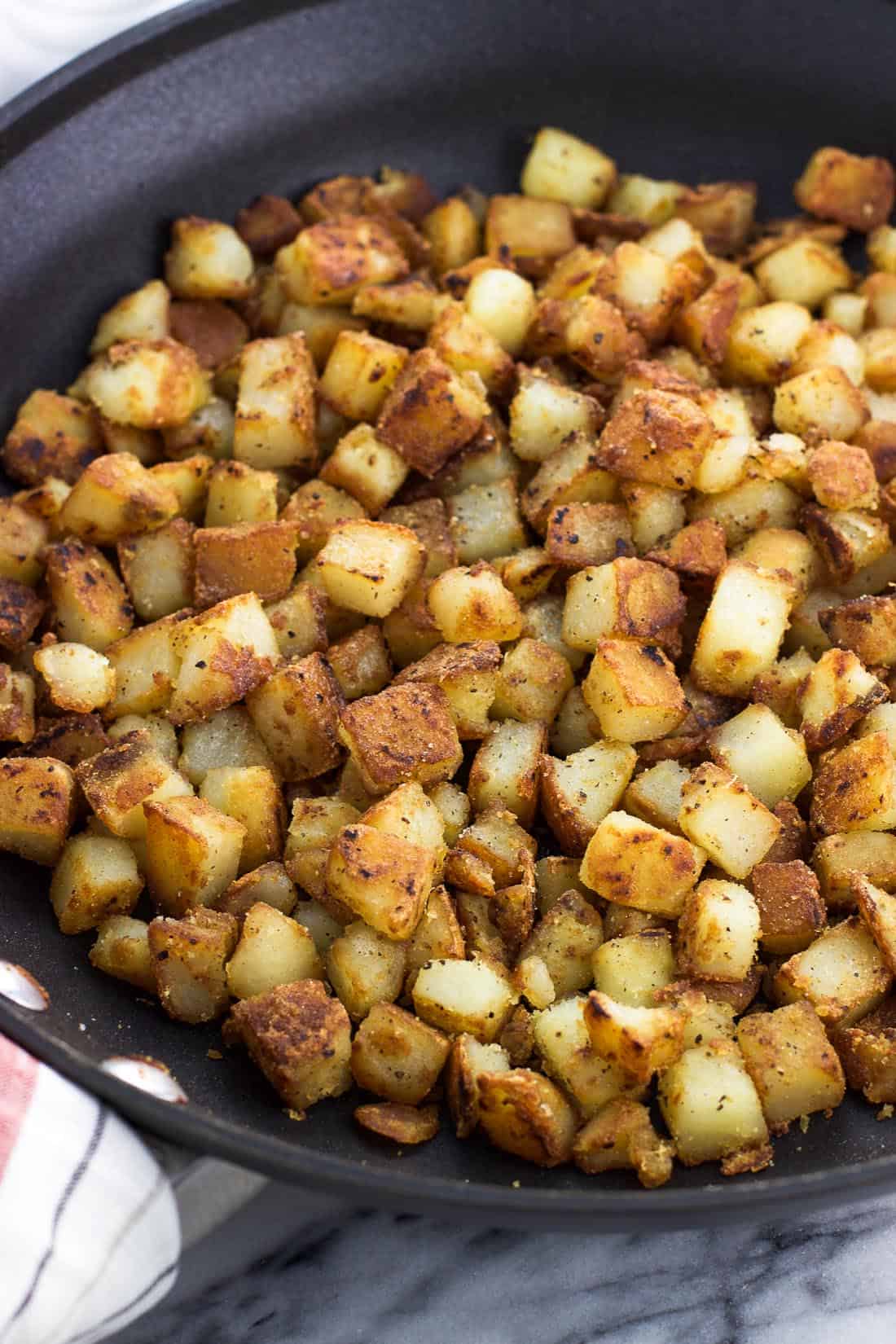 There are lots of different ways to customize the breakfast burrito of your dreams, but my go-to version (this recipe here) sticks pretty close to its taco shop inspiration. This version includes:

Why and how do I parboil potatoes?

I totally get it. Parboiling the potatoes before chopping and sautéing is just another step to do and pot to wash. I’m all for simplifying things in the kitchen.

But! Parboiling, or boiling the potatoes in salted water until they’re part-way tender, helps them achieve a crisp exterior and fluffy soft interior once sauteed over a relatively high heat. All good qualities for potatoes that will be in a burrito filling.

It wouldn’t be the end of the world if you don’t parboil them, but the time and work is worth it to have a cohesive and satisfying burrito.

To cut down on assembly time, I’ve even parboiled the potatoes a day ahead of making the burritos, simply chopping and sautéing prior to cooking the eggs and continuing with the recipe. 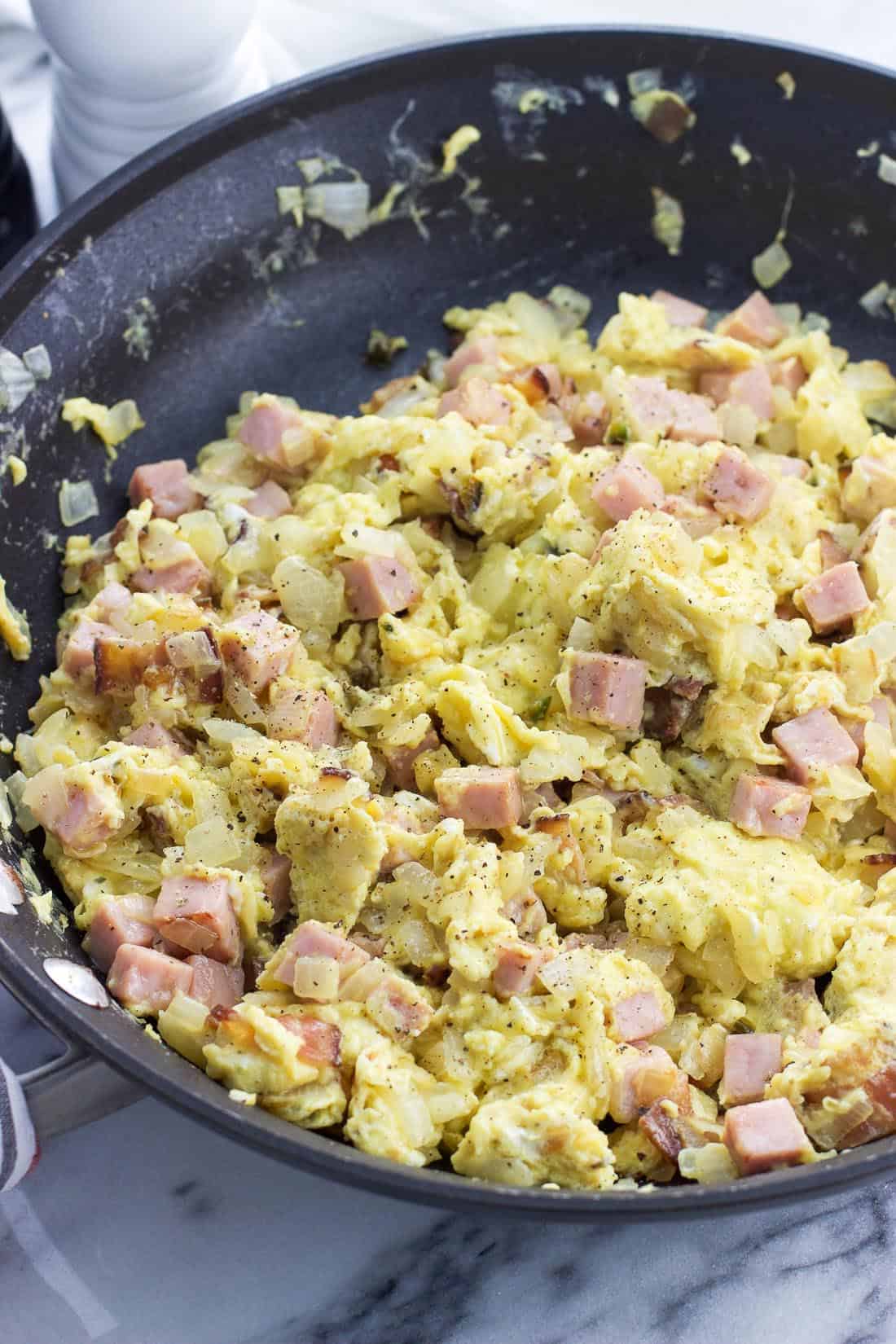 The potatoes parboil in a large pot of water, but once that’s done, the rest of the filling cooks up in just one large skillet.

First saute the parboiled potatoes until they’re golden-brown and crisp on the outside. Remove them to a separate plate, then saute the onion, diced jalapeno, and ham and add in the already cooked and crumbled bacon. <–That’s another make ahead step.

Once all that is ready, in go the beaten eggs. I add a tablespoon of milk to my eggs when I’m whisking them as that helps them become fluffy when they’re scrambled.

The pan will be nice and hot so it doesn’t take long for the eggs to cook at all. Just a minute or two. Go around the outside of the pan with a spatula and scrape them into the center to scramble them perfectly.

All that’s left is to add the shredded cheese to the filling when you fold the tortilla up.

How to fold a burrito

Now comes the fun part: assembly. Well, not really fun I guess because I struggle with wanting to add too much filling and having the whole thing become a mess. But you know what I mean.

I tried to capture the folding steps in the last picture above, though it’s a little bit hard to fold and photograph at the same time. 🙂 Once your fillings are laid horizontally on the tortilla with a margin around the ends, you’ll fold up the bottom half horizontally. Use the bottom edge to tuck under the filling a bit and push it back towards you, making it snug in there.

Then fold each side up and hold the edges down snugly as you roll the burrito up. Stack these freezer breakfast burritos with the seam side down to hold them in place as you prep the rest of the batch. 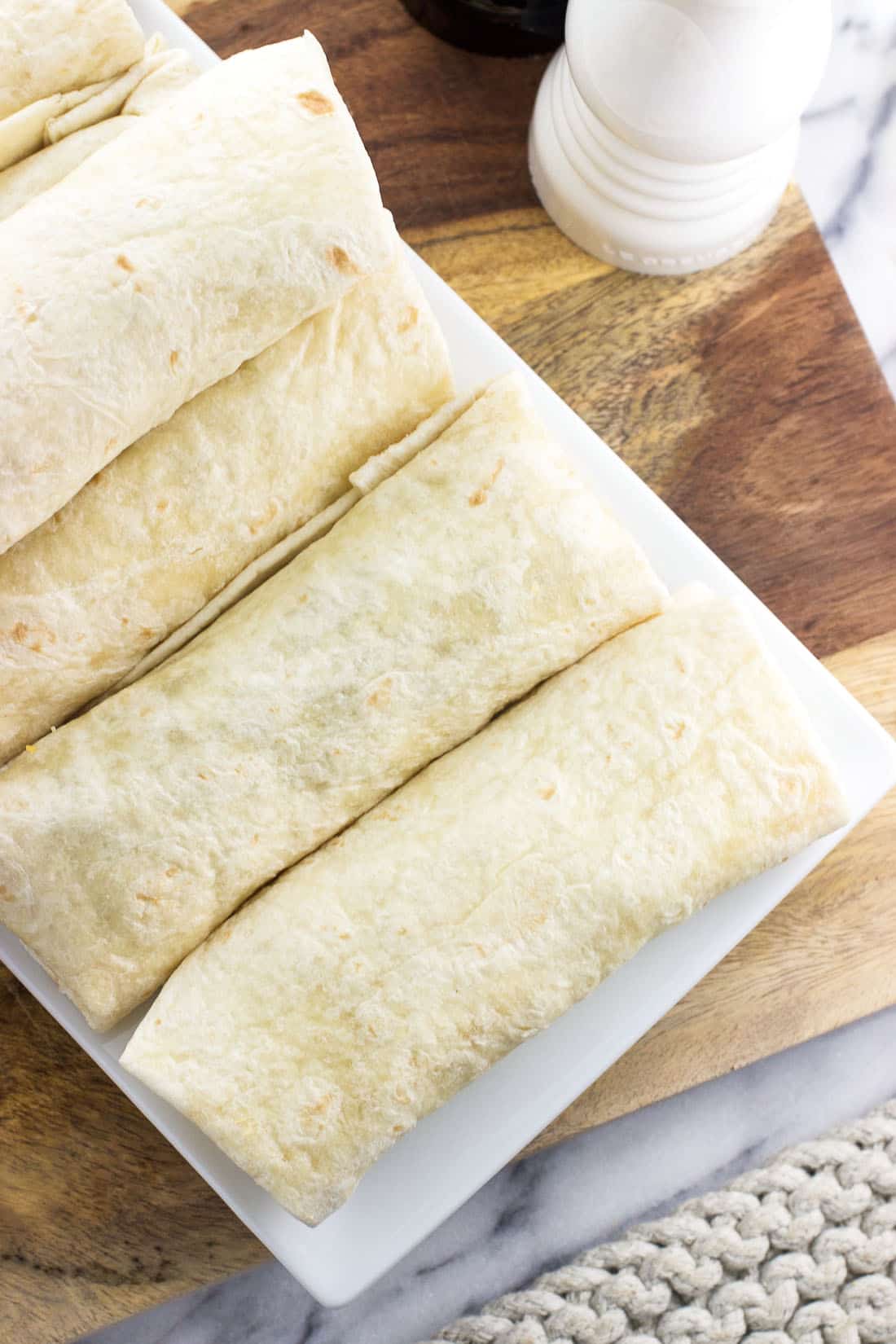 I like to wrap each burrito in aluminum foil, and place them in a jumbo plastic bag in the freezer. I’ve been toying around with the idea of ditching the foil and simply storing them in the bag without any covering, but I’m afraid they might stick together and be a pain to separate once frozen. Choose your preferred method though.

My favorite method to reheat freezer breakfast burritos is in the microwave. The best part about it is that you don’t even need to thaw them beforehand. They can go right from freezer to microwave.

Remove the frozen breakfast burrito from the foil and wrap it in a paper towel. Place it on a plate and microwave for five minutes on half-power. Let stand for a minute or so to cool before eating.

That’s it! No need to plan ahead for defrosting. All microwaves vary a bit so adjust as needed. In my microwave this results in the filling being thoroughly warmed throughout without bursting out and becoming messy.

Though it’ll take longer than with the microwave, you can easily reheat these freezer breakfast burritos in the oven. Just keep them wrapped in foil and stick them in the oven until the filling is heated throughout.

This method takes a bit longer than you might like for breakfast to be done, so if you don’t have a microwave, I’d stick a burrito in the fridge the night before you’d like to eat it. This way it’s thawed a bit and will cook faster. 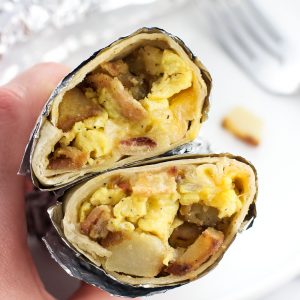 Cook the rest of the filling: