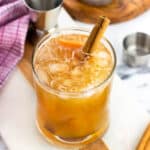 Great for fall get-togethers, this bourbon apple cider cocktail features a nice balance of flavors and makes for some easy sipping. Orange peel and cinnamon tie together the apple cider and ginger beer flavors beautifully in this simple-to-make mixed drink.

I don't have a large liquor cabinet by any means. In fact, 'liquor cabinet' is a bit of a misnomer as all of my liquor and shelf-stable mixers are housed in the small shelves above my over-the-range microwave. It works for now!

Because of this efficiency there are some ingredients that crop up over and over in the mixed drinks I make, like ginger beer and orange liqueur, as well as apple cider and cranberry juice in the fridge. It's SO easy to craft different drinks just by changing up the type of liquor and a few support ingredients.

After buying my first carton of apple cider this season, I challenged myself to come up with additional cocktails to make with it beyond a cranberry apple margarita (a reader favorite!) and an apple cider mule. This bourbon apple cider cocktail ties in that ginger beer and orange liqueur for an easy, not-too-sweet cocktail brimming with cozy fall flavor.

How to Make This Drink 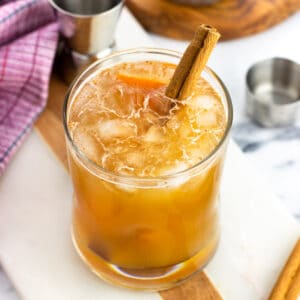 Ingredient Notes Apple cider: Pressed apple cider, not sparkling cider, is used in this drink. Ginger beer: This is non-alcoholic and can be found either by the drink mixers or in the soda aisle. Ginger ale would likely be lacking in flavor as it has less of the (delicious!) ginger bite than ginger beer does. Bitters: I've made this drink both with the Angostura aromatic bitters and orange bitters and enjoyed both versions, though likely other flavors would work well, too. Which kind you use is just up to personal preference. Recipe Tips