Enjoy homemade eggnog without worrying about raw eggs in this easy, completely cooked eggnog recipe. It stays for days and makes enough for a small crowd, but can be scaled up or down as needed. Delicious with alcohol or without! 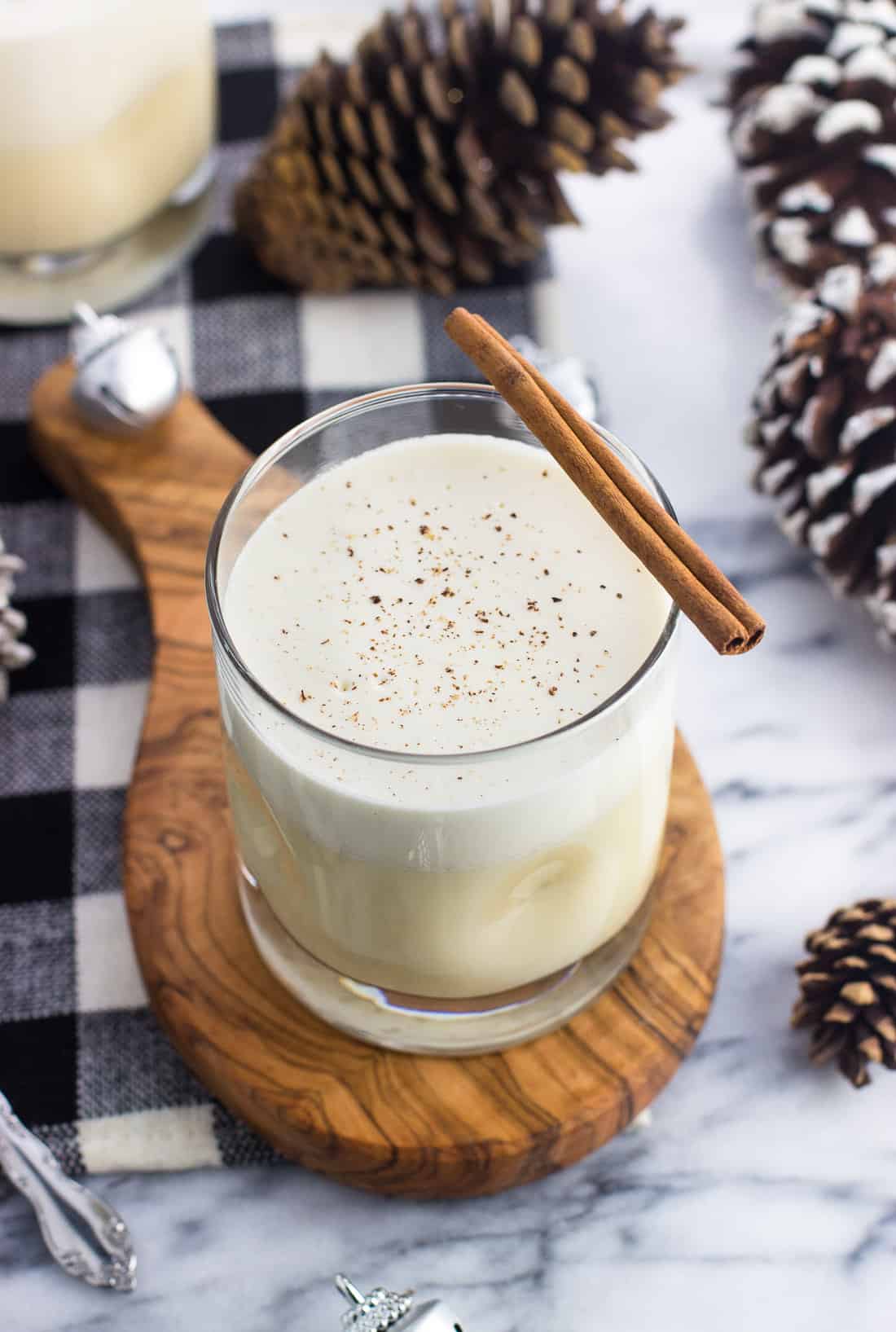 Last year we hosted a tiny eggnog-making party in which I was determined to make cooked eggnog. However so many of the recipes I found for cooked eggnog still called for whipped raw egg whites added in at the end, once the eggnog was thoroughly chilled.

Now maybe this was just one of my culinary blindspots (much like when I thought the pudding itself in banana pudding was banana-flavored), but I was surprised there was still raw egg something or other going on in supposedly cooked eggnog recipes.

Not that there’s anything wrong with that! (Seinfeld voice) I know that bacteria is more likely to be in the egg yolk than the whites, and that using pasteurized eggs can help reduce the risk of Salmonella (per the CDC). But still. Is it possible to make a totally satisfying, completely cooked homemade eggnog recipe?

Whether you would like to be extra careful with risk of foodborne illness this holiday season, can’t find pasteurized eggs, or simply think raw eggs have an ick factor, this totally cooked eggnog recipe is for you. 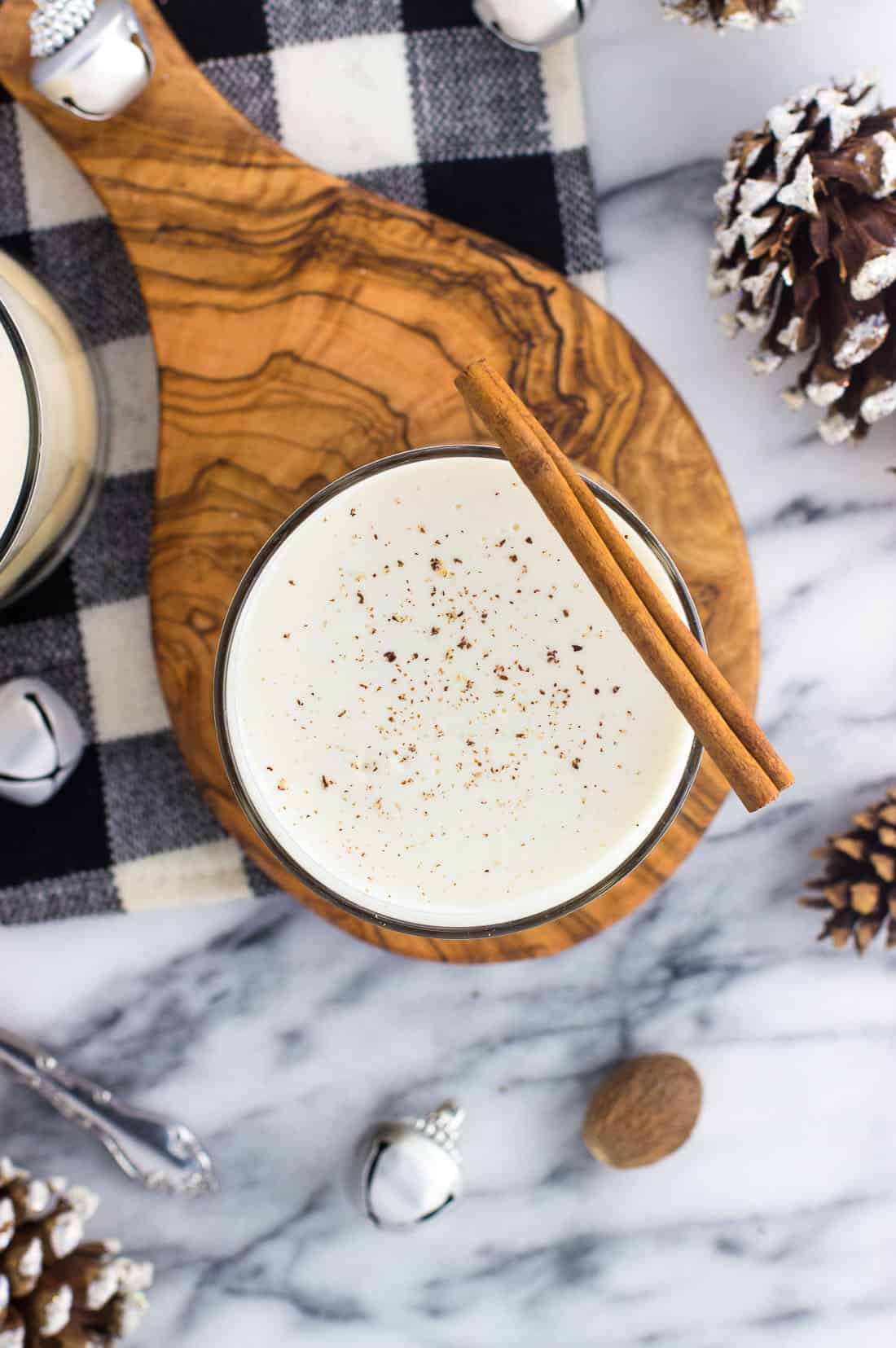 How to make cooked eggnog

When comparing this cooked eggnog to regular homemade eggnog recipes, the ingredients are just about the same. At its base, this eggnog contains eggs, sugar, milk, and cream, with vanilla extract, nutmeg, and cinnamon providing flavor.

Plus booze. But we’ll get to that later. 😉

The difference, and it’s a big one, is the order in which the ingredients are added to the recipe.

Just about any homemade eggnog recipe I’ve seen calls for separating the eggs, either tempering the yolks or otherwise cooking them to raise the temperature just enough to bring them out of ‘raw’ territory. Then the egg whites are beaten until frothy and stirred in once the eggnog has been well chilled.

Here though, we’re not separating eggs. Hey, that’s less work already, right? Whole eggs are whisked together with the sugar and salt, and then combined with milk while set on the stove.

Keep whisking/stirring while the egg/sugar/milk mixture heats and begins to thicken, until it reaches 160°F. I highly recommend using an instant-read thermometer for this cooked eggnog recipe. It truly takes the guesswork out of any kind of time-sensitive recipe, like this one. 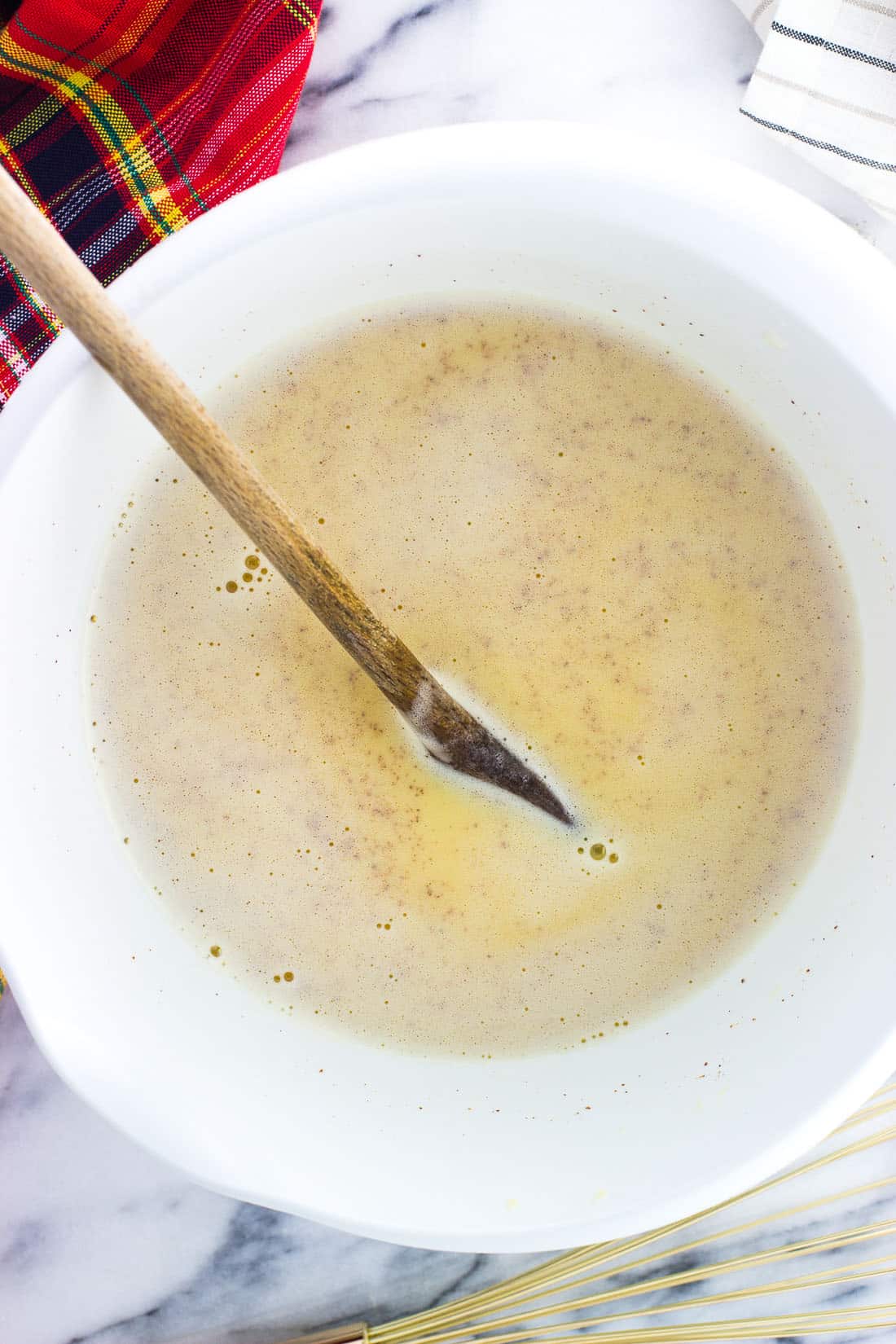 We want to get the eggnog mixture off of the heat right at 160°F to prevent it from boiling and risking the eggs developing an otherwise unpleasant texture. I use my kitchen thermometer for any recipe that features a slightly finicky temperature component so I haven’t made this one without, but around 160°F the mixture leaves a thin film on the back of a spoon. Not a super thick one, but a present film. The eggnog consistency won’t be thick, either. This eggnog bulks up later on by adding cream.

Pour the mixture into a large, non-metal bowl and whisk in the vanilla extract, nutmeg, and cinnamon, and then the remaining milk.

All the heating is done, so we want this cooked eggnog to become chilled as fast as it can. You can stick it in the fridge and/or pour it into a large zip-top bag and place it in an ice bath. Whatever works with what you’ve got.

What kind of alcohol to use in eggnog

Once it’s chilled is the time to add alcohol, if using. I’m not a big bourbon drinker normally (my husband would say that’s an understatement), but I *love* bourbon in eggnog. Do use your discretion with adding the amount you prefer, but we like adding around 6 ounces of bourbon to this recipe.

Other alcohols like brandy or dark rum also work well in eggnog. Use whatever alcohol you like, or don’t – you can certainly proceed with the recipe as-is for non-alcoholic cooked eggnog. 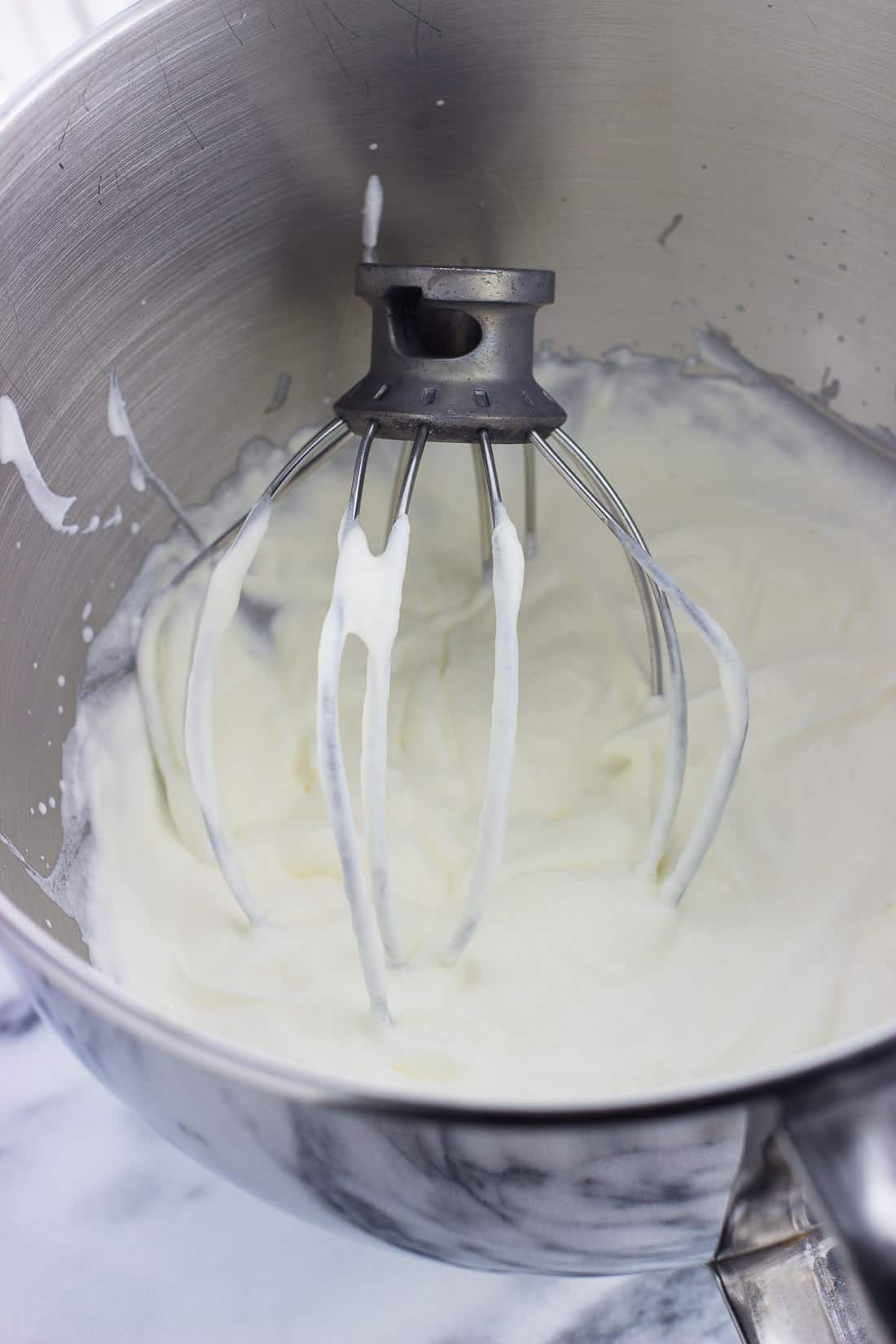 Once the cooked eggnog with booze has chilled, it’s time to thicken it up. Whip heavy cream until soft peaks form, which you see in the above photo. A stand mixer makes this part super easy. ‘Soft peaks’ means the cream is definitely not at whipped cream status, but the cream will softly stand up when you lift out the beater, and then sag back down into the mixture.

Once you stir/whisk the thickened cream into the eggnog, it’s good to go! When portioning out servings, give it a big stir so you don’t ladle too much cream into a glass, as the cream likes to rise to the top.

This completely cooked eggnog recipe is SERIOUSLY good. In fact, it’s probably the best eggnog I’ve ever had. The bite from the bourbon is smooth and balances out the sweetness, and the texture is every bit as satisfying as you want a sip of eggnog to be.

Plus with the extra added bonus of not having to toss it because — how long has this raw egg drink been sitting around? Perfect. 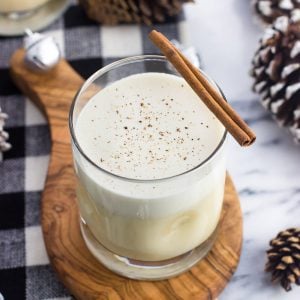 Serving size: This recipe yields approximately 60 ounces of cooked eggnog in total. The nutritional stats are only an estimate for a 6-ounce serving. Storing eggnog: Store this eggnog in the refrigerator. It should stay for 5-6 days without issue. Shake or stir it up before serving to reintegrate the thickened cream.

Serving: 6oz | Calories: 225kcal
Tried this Recipe?Tag @mysequinedlife - I love to see what you're making!

Base eggnog recipe adapted from allrecipes.