This dairy-free banana pudding features bananas IN the pudding itself for a luscious and boldly-flavored dessert. Layer with wafers and banana slices or enjoy as-is! 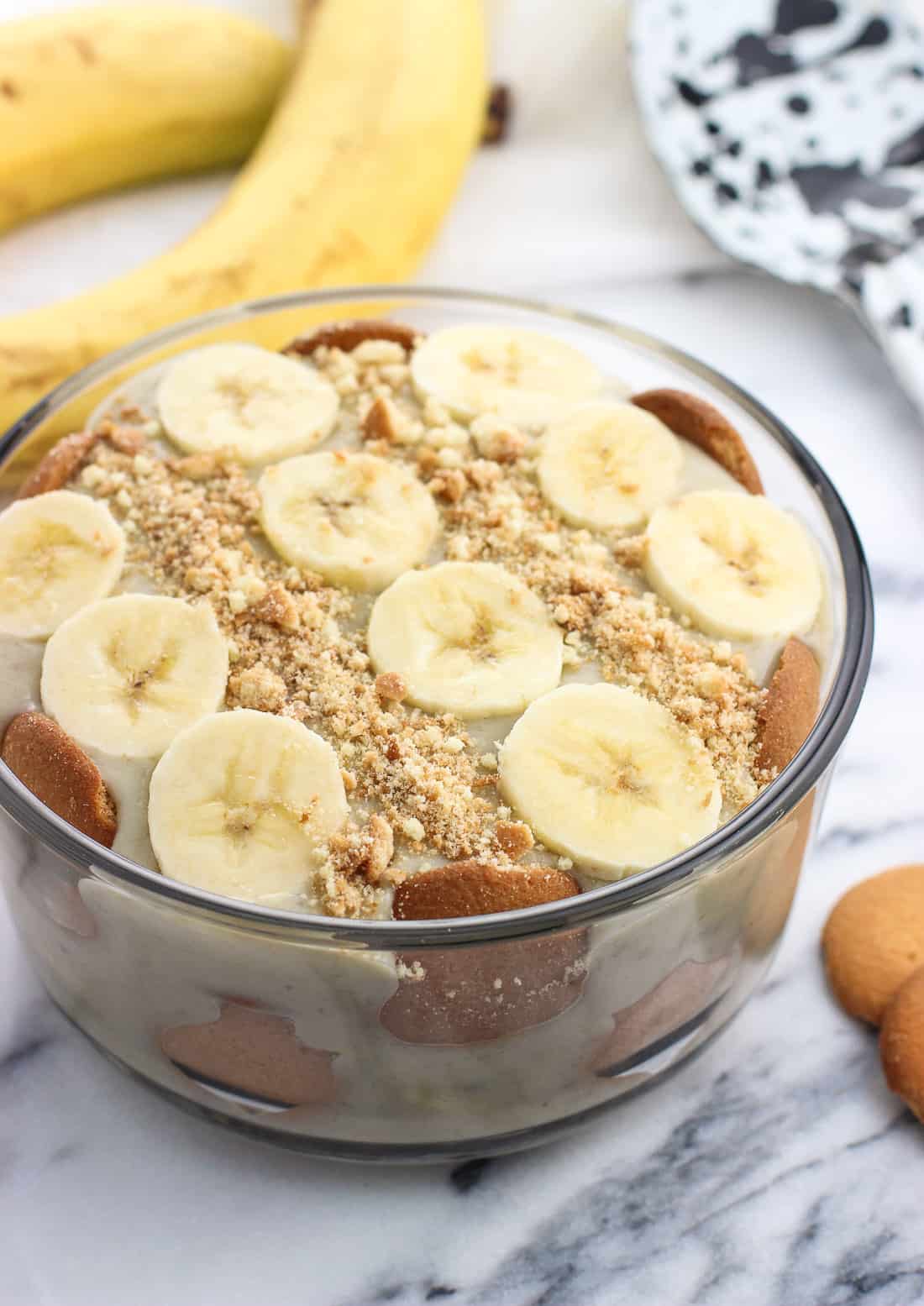 It’s been three plus years of living in the South and I’m still getting the hang of common ‘Southern’ foods. Okra was a new one, and so were fried pickles, pimento cheese, all things BBQ, hot chicken…especially hot chicken. The one food where mild can actually mean face-meltingly hot. Spiciness is always subjective, but oof — this one is off the charts.

Southern-style desserts are a different story because I’ve certainly eaten sweet treats like red velvet cake and pecan pie way before living down here. However it took moving here to finally experience banana pudding. Better late than never I guess!

Now this is silly, but up until then I thought the pudding itself would be banana-flavored, not just vanilla pudding layered with bananas and cookies/wafers. I mean it’s called ‘banana pudding’ for a reason, right? 😕 First world dessert problems.

That revelation didn’t stop me from working on this dairy-free banana pudding, where the pudding itself is flavored with REAL bananas (no artificial flavoring!). It’s a lusciously thick and creamy dessert layered with cookies and banana slices that truly is bursting with banana flavor. 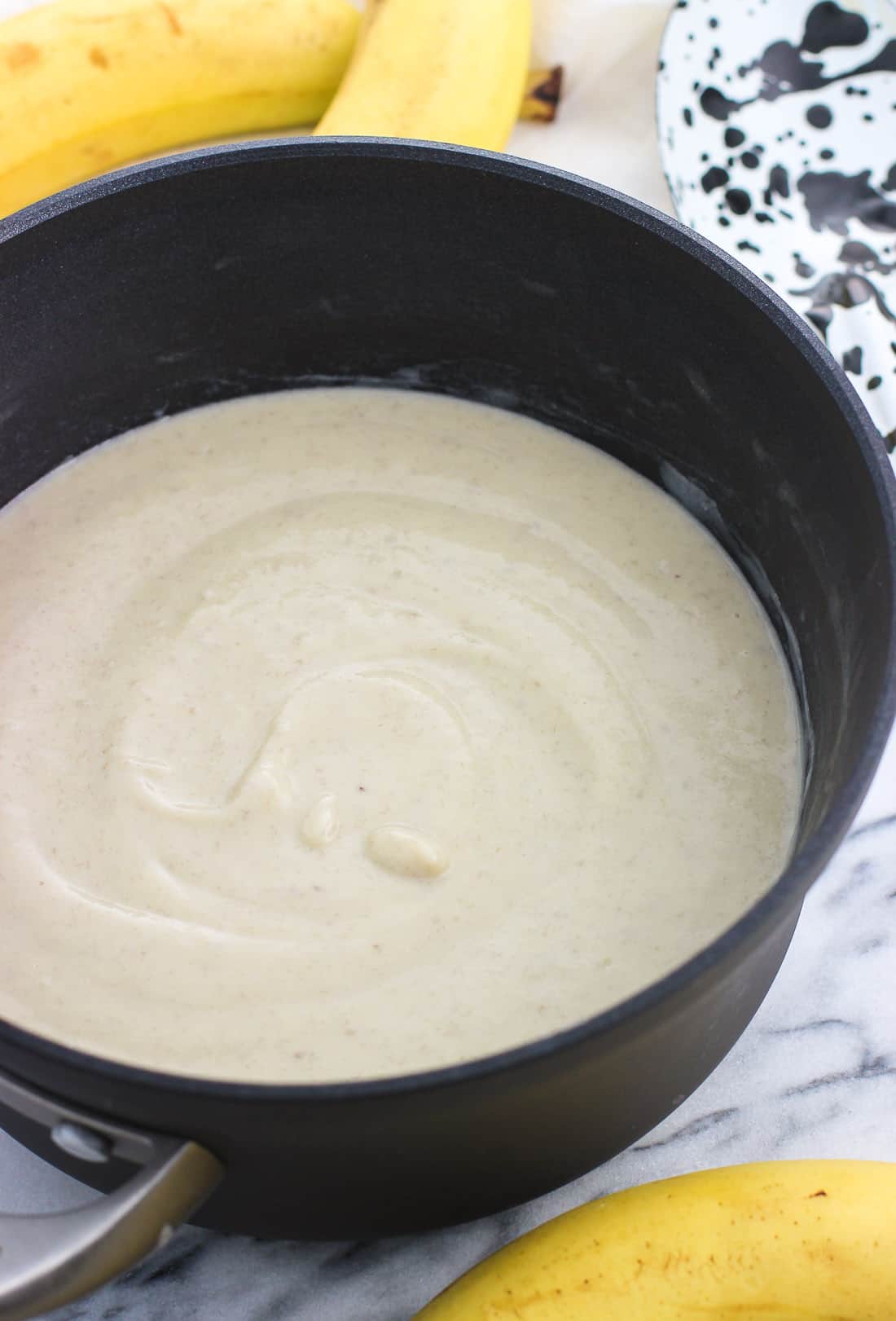 I based the method of this dairy-free banana pudding off of my dairy-free lemon pudding, which I *highly* recommend to all the citrus lovers out there. For this one though, I used one can of (full-fat) coconut milk and one cup of almond milk. Much of the thickness comes from the addition of cornstarch, so you can use lite coconut milk if that’s what you prefer. I use the lite variety when making the lemon pudding I link to above and it works beautifully. 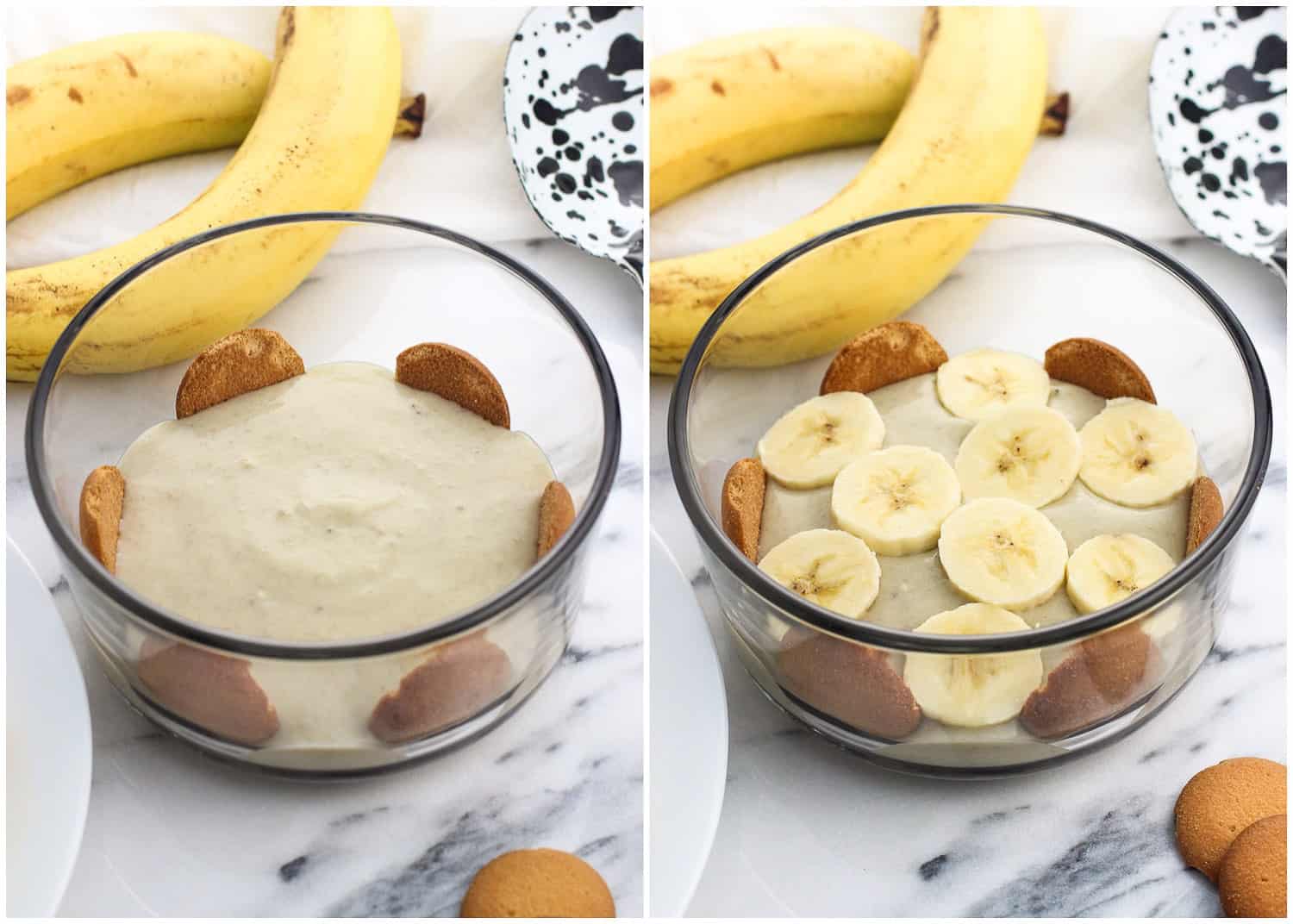 As for assembly, I’m partial to making one large bowl where you can scoop out servings. I started by lining the bottom of the dish with vanilla wafers, and then propping up vanilla wafers along the perimeter. 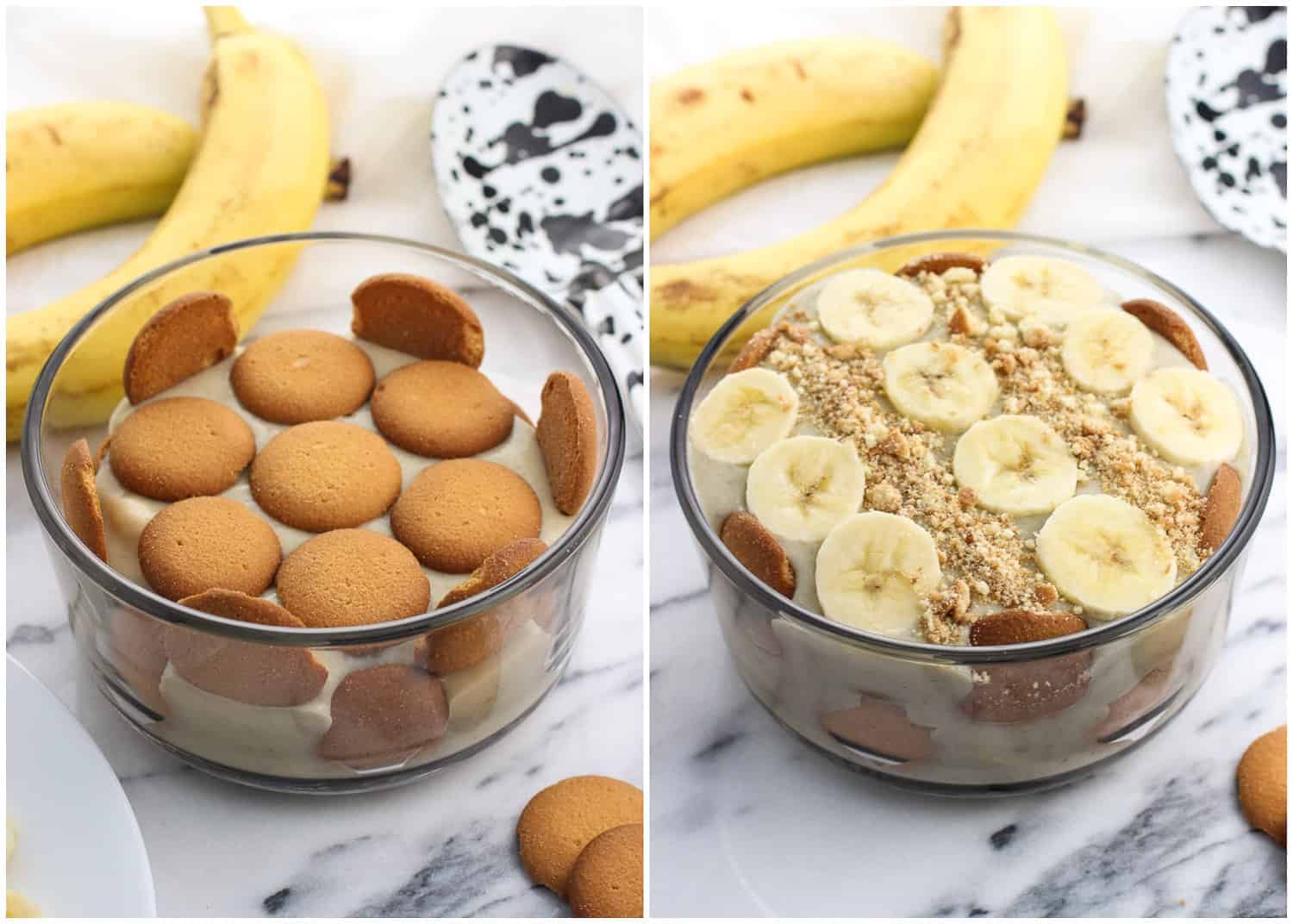 Since I had pudding leftover after making the bowl above (the dish I used has about a four-cup capacity), I used the extra to make an individual banana pudding parfait with layers of pudding, fresh banana slices, and crushed vanilla wafers. I’m thinking making all individually-sized portions would be a fun dessert for a party! Either way this dessert will bring the bold banana flavor with a touch of sweetness. Just depends on whether you’d like to share with others or enjoy your own personal serving. 😉 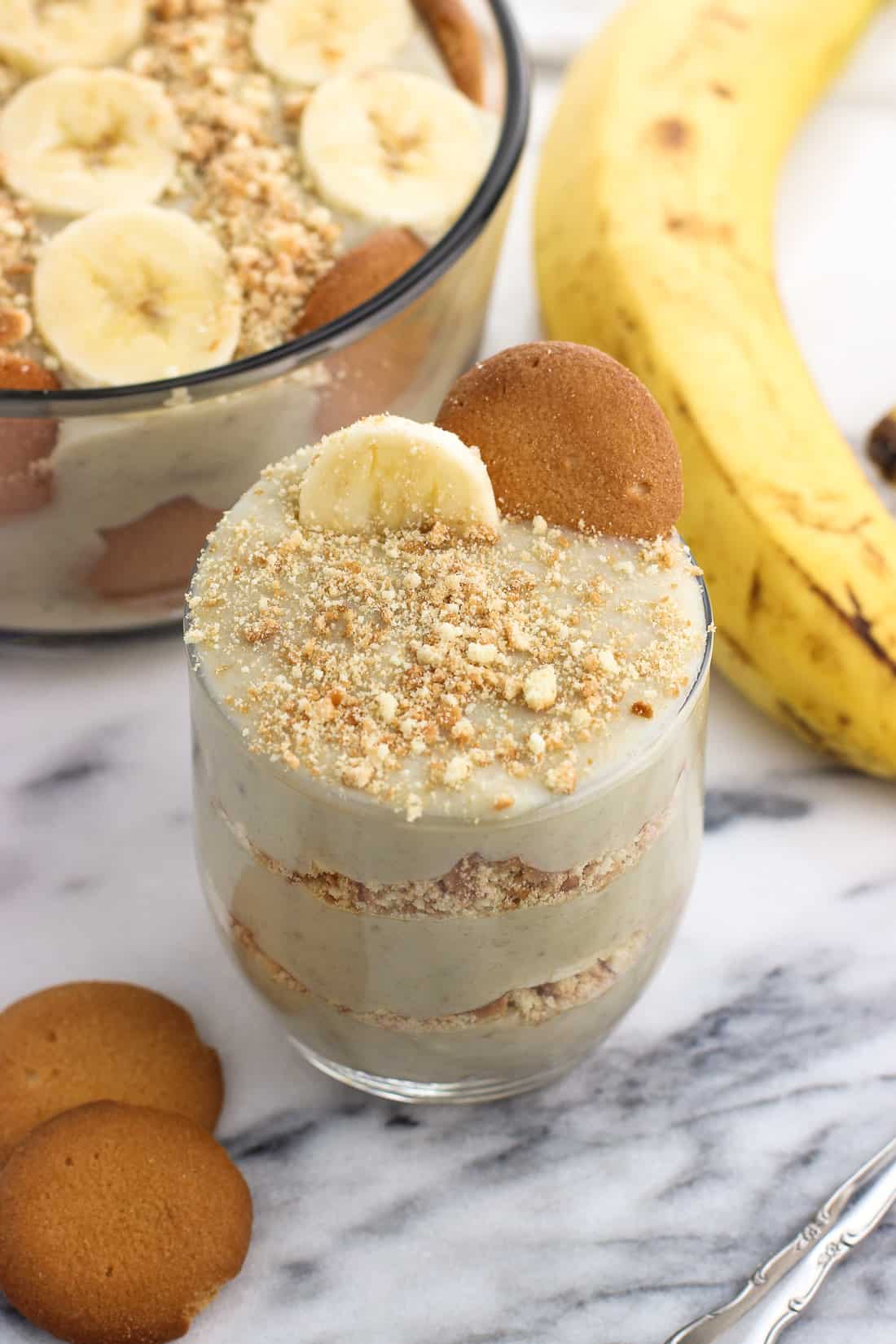 For the banana pudding:

Dairy-free note: Beyond not using dairy milk and butter, be sure to check the nutrition label for your particular vanilla wafers to ensure they do not contain dairy. While the classic Nabisco brand contains milk, I have found dairy-free brands available in supermarkets (Sprouts, Whole Foods, Walmart) and online (Amazon, Vitacost).  The quantity of vanilla wafers will vary depending on how you'd like to assemble this banana pudding. For all you see in these pictures, I used a little more than half of one regular-sized box. The pudding can be made the day before assembling. Refrigerate with the plastic wrap pressed against the surface.