Mini Mexican Chocolate Biscotti are deep chocolate-y biscotti with a bold spice flavor coming from ground cinnamon and cayenne pepper. Topped with cinnamon sugar, these bar cookies are a great pairing for a cup of coffee or as a part of holiday cookie trays. 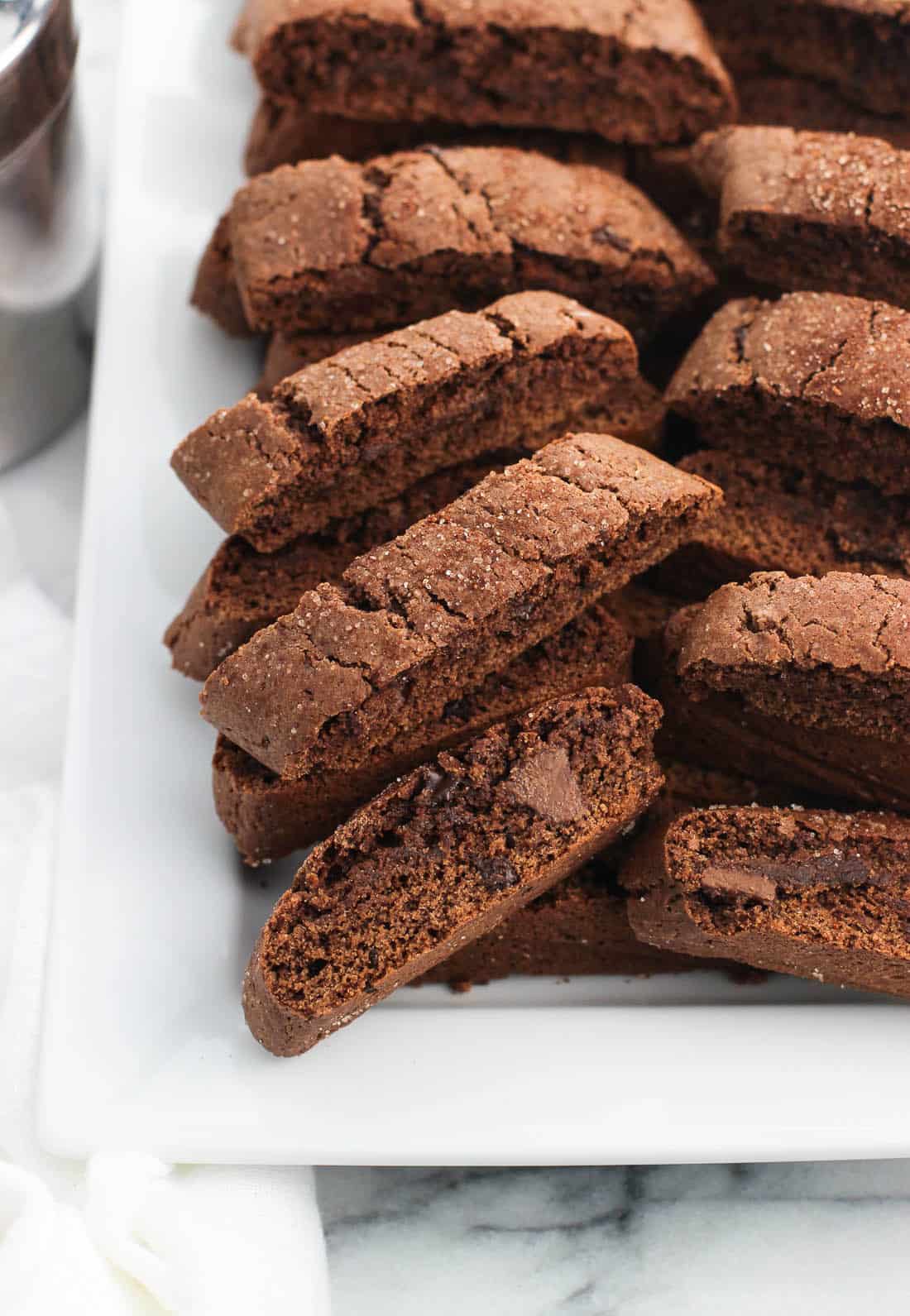 In classic 'me' fashion, these Mini Mexican Chocolate Biscotti are coming to you a few weeks ahead of schedule. I'm not the most patient person (might be an understatement), but I made these thinking they'd be great Christmas cookies and that I'd save the recipe until at least early November.

The longer I thought about it the more it seemed silly to wait, because really, would anyone complain about having a spiced chocolate cookie recipe not overtly-holiday in nature earlier than later?

Probably yes they would because this is the Internet after all, but I'm willing to take the heat.

Biscotti are one of the first baked goods I got hooked on making when I was discovering my love for cooking/baking. They're a versatile cookie perfect both for dunking in coffee or hot chocolate and munching on by themselves, and they're hardy and hold up if being mailed.

I always include biscotti in holiday cookie packages I send to family and friends because I don't worry as much that they'll arrive in crumbs as I would with, say, dark chocolate pizzelle. Those are more of a hand-deliver type of cookie. 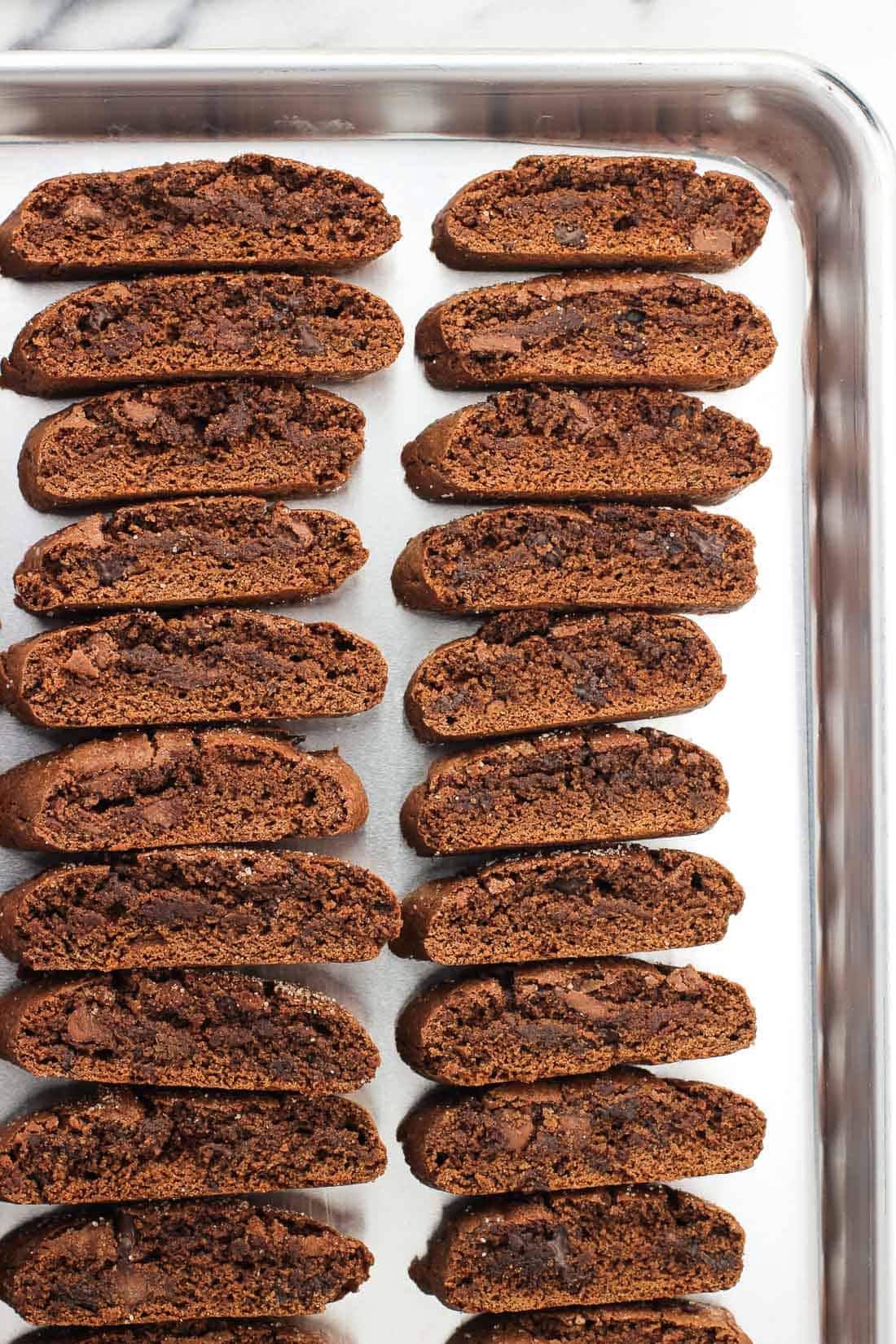 I based these Mini Mexican Chocolate Biscotti off of my triple chocolate biscotti recipe, which yields larger, non-spiced biscotti drizzled in chocolate. Those are delicious, however in my opinion smaller cookies work better for cookie trays as you don't have to commit to just one or two types of cookies. Smaller and mini cookies means you can sample more varieties of cookies without overdoing it. Perfect!

If you've ever encountered a super dry, break-your-teeth type of biscotti, I will say that these biscotti are not like those biscotti. While these are dry and crumbly like biscotti should be, they are a bit softer to bite through - not rock hard. They'll for sure hold up to dunking, but dunking isn't mandatory to prevent you from chipping a tooth. 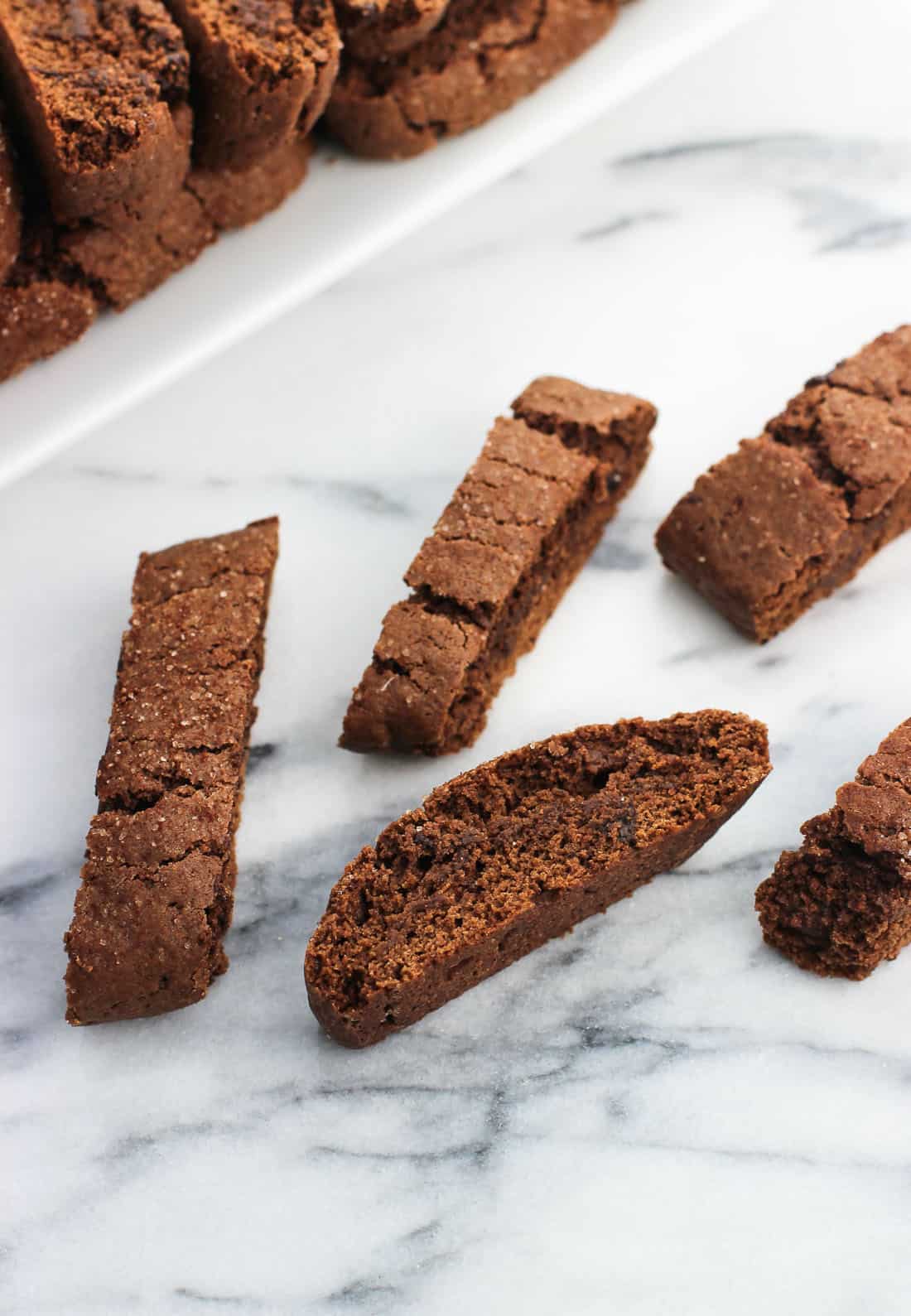 At its base, this recipe consists of butter, sugar, eggs, vanilla extract, flour, and baking powder. All standard cookie ingredients there. Then we add unsweetened cocoa powder to turn this biscotti nice and chocolate-y.

Now it's time for the fun flavor. I've always been intrigued by Mexican hot chocolate recipes that feature cinnamon and chiles or peppers. Peppers in dessert? White ground pepper works SO GOOD in pfeffernusse cookies, but cayenne is a step or two or five above that.

Ground cinnamon and cayenne add a bold (but not overwhelming) warming flavor to these Mexican chocolate biscotti. You won't go running to down a glass of milk as you might when eating savory food spiced with cayenne, as I find the chocolate-y sweetness counteracts any abrasive 'spiciness' aspect.

If you're skittish with cayenne I'd say stick with adding just ¼ teaspoon to the recipe (not ¼ teaspoon plus ⅛ teaspoon).

Lastly we keep a good thing going by stirring in chocolate chips or chunks (use your favorite variety). I like a mix of dark chocolate and semisweet but really any will do.

While optional, I love to add a sprinkling of cinnamon sugar over top to amplify that warm spiced flavor even more. 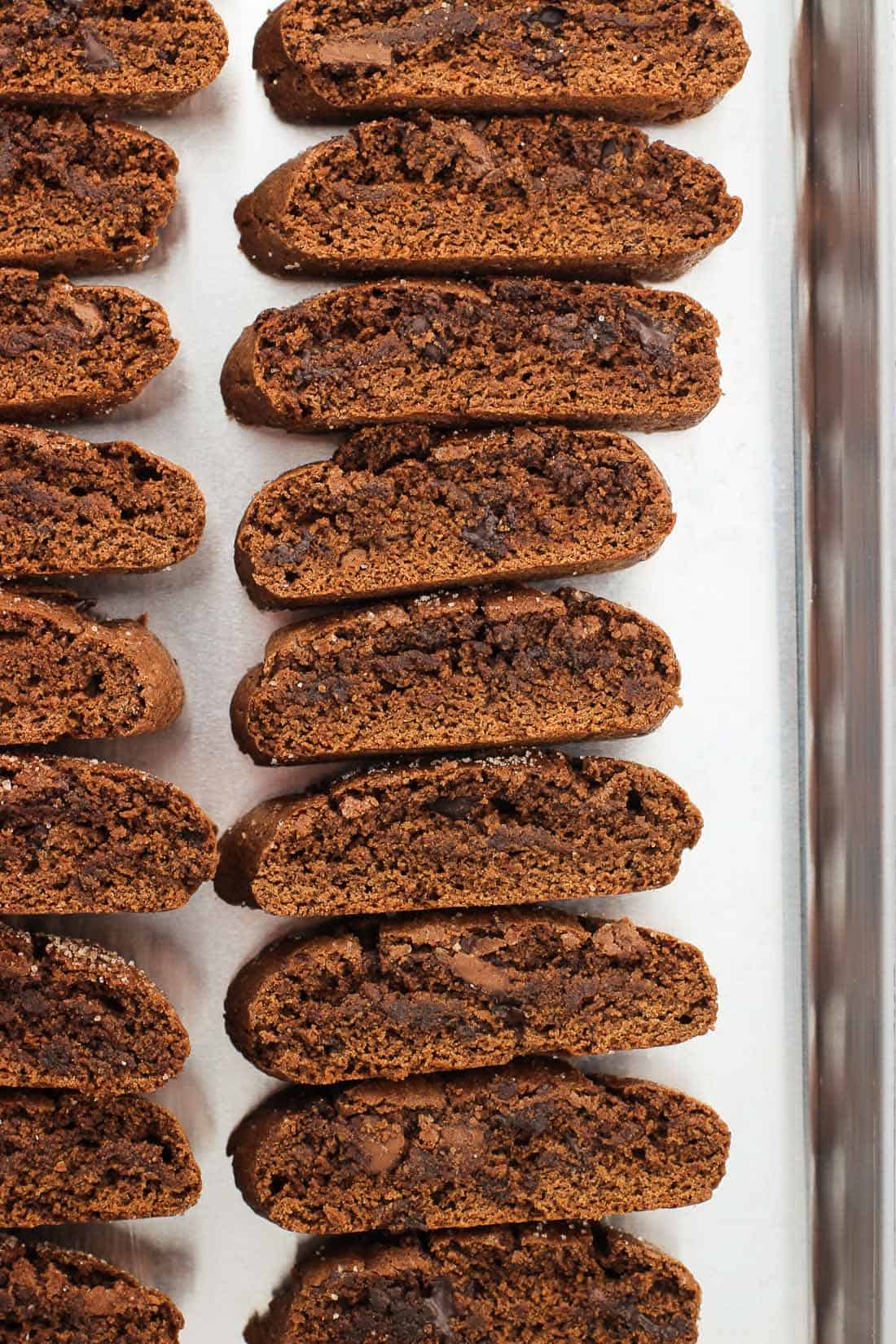 There are a ton of biscotti variations out there, from classic versions flavored with almond/anise to chocolate-dipped/drizzled ones to all flavors in between, but one thing remains the same: their baking method.

The cookie dough comes together simply. First mix together the wet ingredients, then add the dry (mixing until just combined) and fold in the chocolate chips. What comes next is what turns what could pass as regular cookie dough into biscotti.

Biscotto, which is the singular form of biscotti, means "twice-cooked" in Italian. Once the dough is mixed together, shape it into logs of dough on a parchment-lined baking sheet. To make these mini biscotti I shaped the logs about ten-inches long/two-inches wide/one-inch tall.

The biscotti are then baked just long enough to firm them up without becoming too crumbly. You'll slice the dough logs into strips (forming individual biscotti) and place the biscotti on their sides (cut sides up/down) to bake again and harden. And there you have it. Twice-cooked. 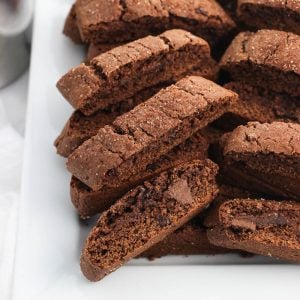 Slicing: You may prefer using a serrated or non-serrated knife for slicing the biscotti. Take a test and see which kind works better (producing less crumbs) for you. Cayenne: These biscotti aren't overly spicy (more like spiced). However if you're skittish about the cayenne, you can reduce it to ¼ teaspoon.