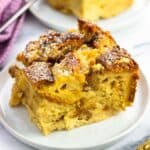 Take advantage of panettone's delicious, bold taste and make one EASY holiday bread pudding. This festive bread features candied citrus and dried fruits and delivers all the flavor you need for a special Christmastime recipe.

Panettone is something I look forward to buying every Christmas season. Always buying, never making.

Reason being that real deal panettone is quite a labor of love! It takes multiple days, calls for specialty ingredients and equipment, and requires a whole lot of patience. I'm TOTALLY okay with leaving it to the professionals for this one.

Panettone is delicious toasted with a little butter (or let's be honest, in pieces ripped straight off), but it truly shines in basic recipes, like baked panettone french toast, as its bold, candied fruit flavor does all of the flavor heavy lifting.

This year I took things a step further and made panettone bread pudding. With key differences from its morning counterpart, this decidedly more dessert version features the same simplicity and is a festive way to feed a crowd.

While store-bought panettone has a very long shelf-life (it was likely made months and months ago!), it still benefits by undergoing a quick toast to dry out the bread cubes before using it in a dish with a significant liquid portion, like this panettone bread pudding.

That said, if you've opened the package and have let it sit for several days to a week+ you will probably be fine by just cubing it and proceeding with the recipe.

Where can I buy panettone?

Around the holidays you can find panettone in supermarkets, but also in discount chains like TJ Maxx and membership warehouses like Costco. I like to buy big 2+ pound panettone loaves at Costco so I have plenty to make a recipe and then snack on, too.

Do I have to cut off the crusts for panettone bread pudding?

Nope! While some recipes call for it likely for aesthetic reasons (though I like how the crusts look in it?), it doesn't serve any practical purpose and just makes extra work so I never do it.

Do I need to toast the panettone?

Due to all of the liquid in this recipe, toasting the panettone cubes just enough for them to turn golden and dehydrate slightly helps them better absorb the custard. If your panettone package has been open for several days or longer, toasting will still be beneficial but you can skip this step for a shortcut.

How do you store/reheat panettone bread pudding?

Cover the bread pudding and store it in the refrigerator for 4-5 days. To reheat, cover the dish with aluminum foil and place in a 350°F oven until warmed throughout, around 15-20 minutes, taking care not to overdo it so it doesn't become dry. 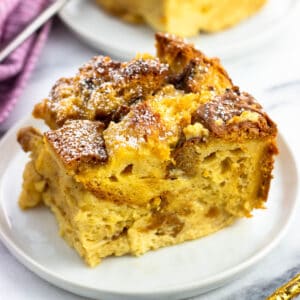 Ingredient Notes Panettone: In the U.S. you can find panettone loaves measured in 1-2 pound packages or 500-1000 grams (1.1 - 2.2 pounds). The slight difference in weight between the two isn't material for a recipe like this, so either a straight one pound or 500 gram loaf will work just fine. Milk: The fat percentage of the milk you use isn't too important as cream is added to the custard, too. Recipe Tips   Serving Suggestion: A dusting of powdered sugar is likely all you need! Panettone has so much flavor on its own that in testing this recipe I've found a dessert sauce drizzle really gets lost and doesn't add enough extra to justify going through the effort in making it. Storage Instructions: Keep this bread pudding covered and refrigerated for up to 4-5 days. Reheating Instructions: Cover the baking dish with aluminum foil (to help prevent it from browning too much and drying out) and bake at 350°F until warmed throughout.