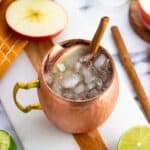 With a few extra ingredients, an apple cider mule is a simple twist on a classic cocktail just perfect for the fall. Apple cider and grated cinnamon pair nicely with the ginger and lime for a vodka cocktail sure to please a crowd.

For a long time I thought margaritas were my favorite drinks, but then I discovered moscow mules, and well...now I'm not so sure.

Classic mules are always welcome, but I've been playing around with flavored versions at home and love how easily you can take them in different directions. With fresh red cranberries and lime wedges for garnish, a cranberry moscow mule is especially festive around the holidays.

This version, made with apple cider and served with a grating of cinnamon, screams "fall!" in the best way. I'm thinking this apple cider moscow mule would make a delicious Thanksgiving cocktail this year.

How to Make This Drink

How to Make an Apple Cider Mule Pitcher

The recipe card below yields one cocktail, but the quantities can be scaled up pretty easily to make a whole pitcher. If your pitcher is extra-large you can likely get away with scaling it up even more, but to make a pitcher of four full-sized drinks, here are the recipe proportions:

Ahead of time you can stir together the apple cider, vodka, and lime juice in the pitcher. Stir in the cinnamon and ginger beer just prior to serving (so it doesn't go flat) and add apple slices for garnish. You can add ice to the pitcher if the drinks will be poured fairly soon after, or simply add ice to the individual glasses to pour over. I'd omit the ice from the pitcher if it'll sit for some time, as it will melt and dilute the drink. 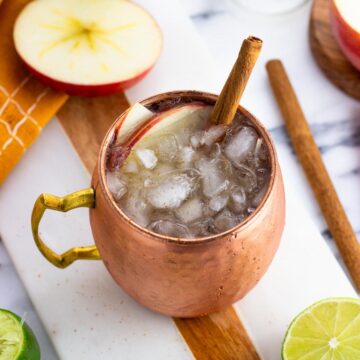 With a few extra ingredients, an apple cider mule is a simple twist on a classic cocktail just perfect for the fall. Apple cider and grated cinnamon pair nicely with the ginger and lime for a vodka cocktail sure to please a crowd.
No ratings yet
Print Pin Rate
Course: Drinks
Cuisine: American
Prep Time: 5 minutes
Total Time: 5 minutes
Servings: 1 cocktail
Calories: 236kcal
Author: Alyssa

Ingredient Notes Ginger beer: Don't sub in ginger ale, as ginger beer's stronger bite is essential as a mixer ingredient here. While there are some "hard" varieties out there, traditional ginger beer used in a mule is non-alcoholic, which is the kind used here. Lime juice: Freshly-squeezed lime juice is recommended for the best flavor. Ice: If you don't have a crushed ice dispenser, add regular ice cubes to a sealable bag and pound with a mallet or meat tenderizer until crushed. Apple slices: Hold off on slicing the apples for garnish until shortly before serving so they don't brown. Non-alcoholic option: Simply omit the vodka for a delicious mocktail. Pitcher Instructions: If making a pitcher ahead of time, leave out the ginger beer to stir in just prior to serving so it doesn't go flat. Ice can go in the pitcher if serving soon after, or just in the glasses to prevent dilution as it melts. To make a pitcher of four fully-sized drinks, use the following quantities: