These five-ingredient Coconut Almond Bars are dense and chewy with a consistency like a Larabar. They have a great almond and coconut flavor and are vegan and no-bake! 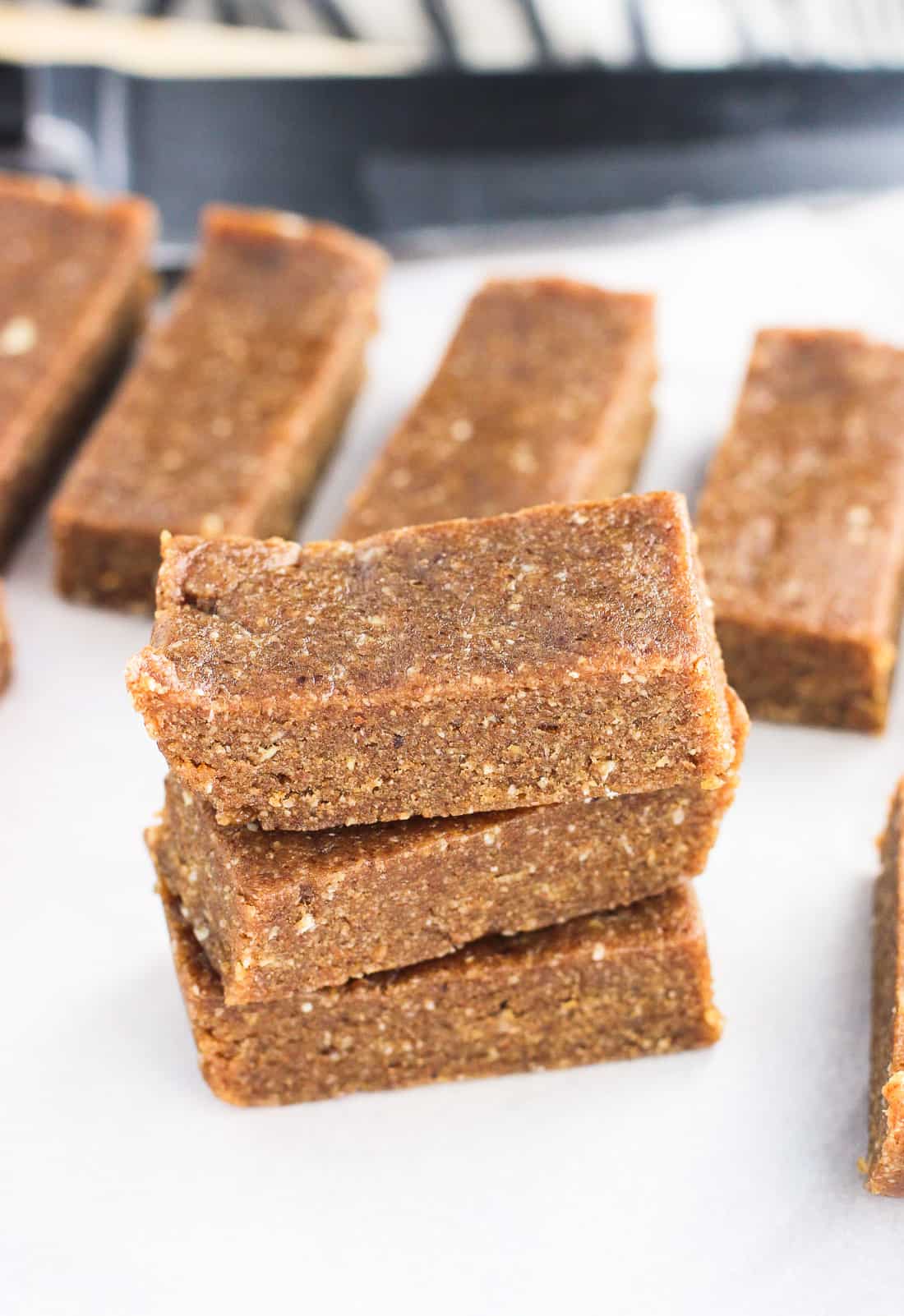 In a world of nine million fancy (and pricey) snack/energy bars, Larabars and rxbars are toward the top of my store-bought favorites list. I usually reserve them for road trip or flight snacks as a little incentive to motor through the hustle and bustle of travel.

In fact, I packed so many rxbars in a neatly lined-up brick in my carry-on luggage on my last trip that TSA pulled me over several times to determine what the dense mass in my bag was. Just my snacks!

One of the base ingredients in both of my store-bought favorites are dates, which is a key part of the soft but hearty texture we've got going on here in these bars. Sweetness, too!

These coconut almond bars use just five natural ingredients and are prepped in a food processor. There's no baking necessary, too, as all they need is a bit of refrigeration to cool down and firm up. 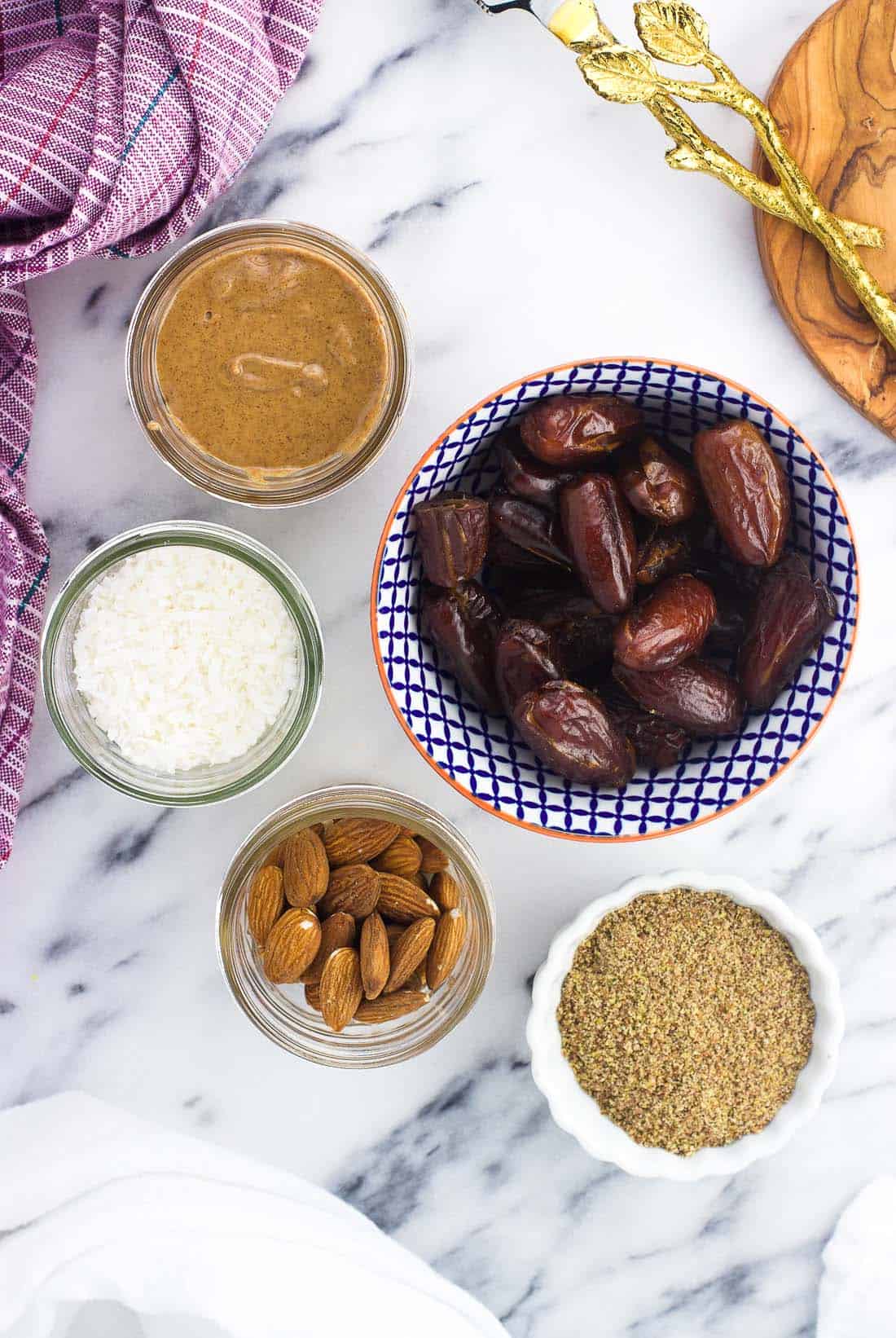 Dates are a big one! Let's talk type.

In the past I've used Medjool dates, but I've taken to using Deglet Noor if that's what I have on hand. I have a surplus from experimenting with cucidati fillings over the holidays, and I find them to be less expensive at my big chain grocery store.

Either will work, and obviously it speeds things up if you buy them pitted, though I recommend doing a quick check as I've found a pit or two left behind on occasion.

While dates provide some fiber, they don't do much on the protein front. Enter, almonds and almond butter. The almonds add a nice occasional mini crunch to these bars, because little crunchy pieces will remain in the finished product.

Dry (unsalted) roasted almonds are my pick, but raw would work fine too. As for the almond butter, I prefer a no-stir variety as it cuts down on the oiliness factor, but a more natural-style almond butter isn't a deal-breaker. Just be sure to stir it up well in the jar before measuring out. 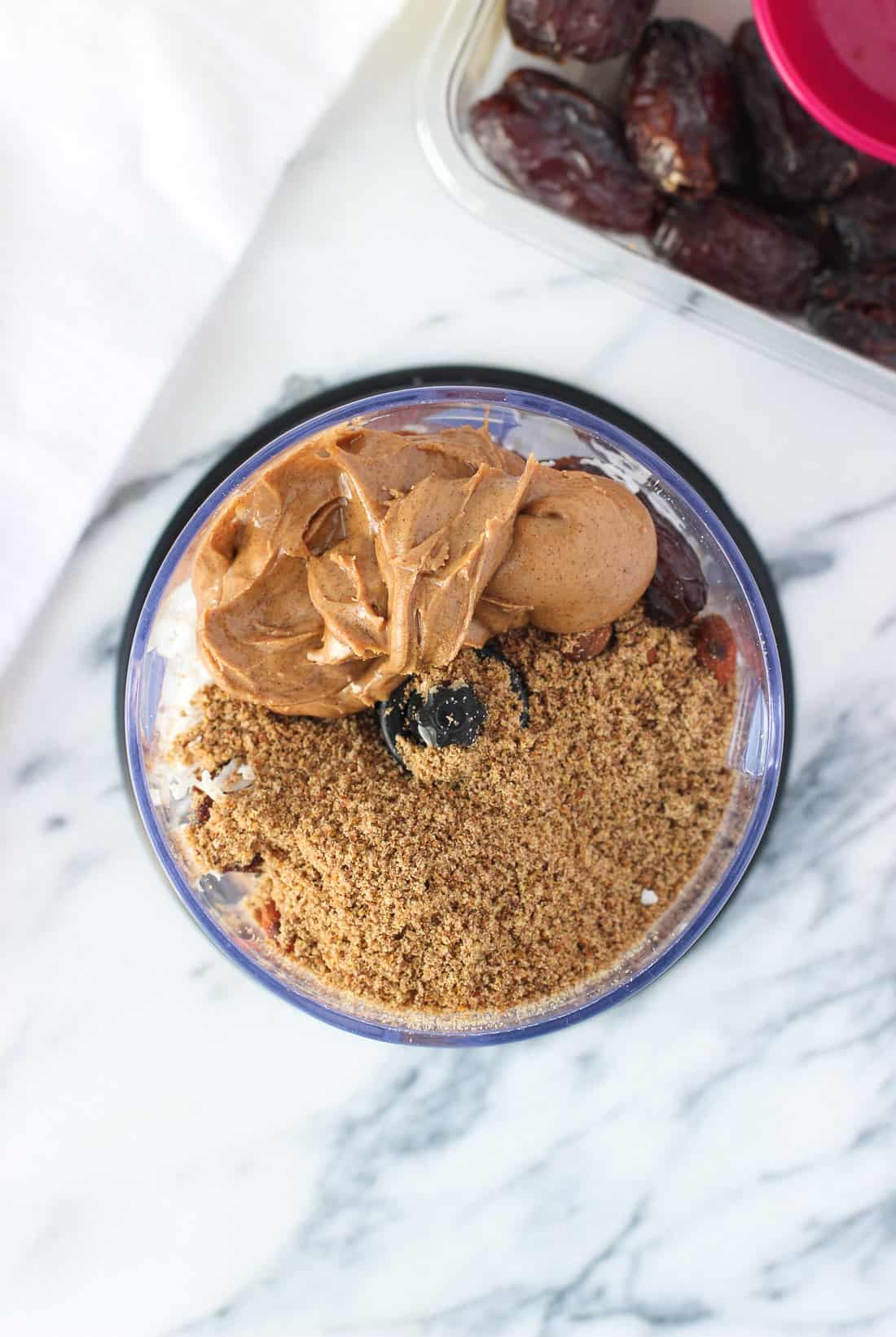 As for the coconut element in these bars, I like to use unsweetened coconut flakes. Usually found right next to the sweetened and flaked "snowflake" coconut in the baking aisle, this variety brings all that coconut flavor with barely any sugar. On my bag, one two-tablespoon serving lists less than one gram of sugar.

You can use sweetened coconut flakes if that's what you have, but I find it useful to have both kinds on hand. As we know, sweetened coconut works great in desserts (like toasted coconut cookies <--yum) and unsweetened is tops in savory coconut recipes, like coconut macadamia crusted salmon.

Snacks kind of ride the line between where either will be fine.

Flaxseed is the final ingredient here and bulks up the nutrition profile of these coconut almond bars. I buy mine ground and store it in the freezer to keep it fresher for longer. I also love adding a spoonful or two to a cup of Greek yogurt to bump up the fiber and omega-3s. 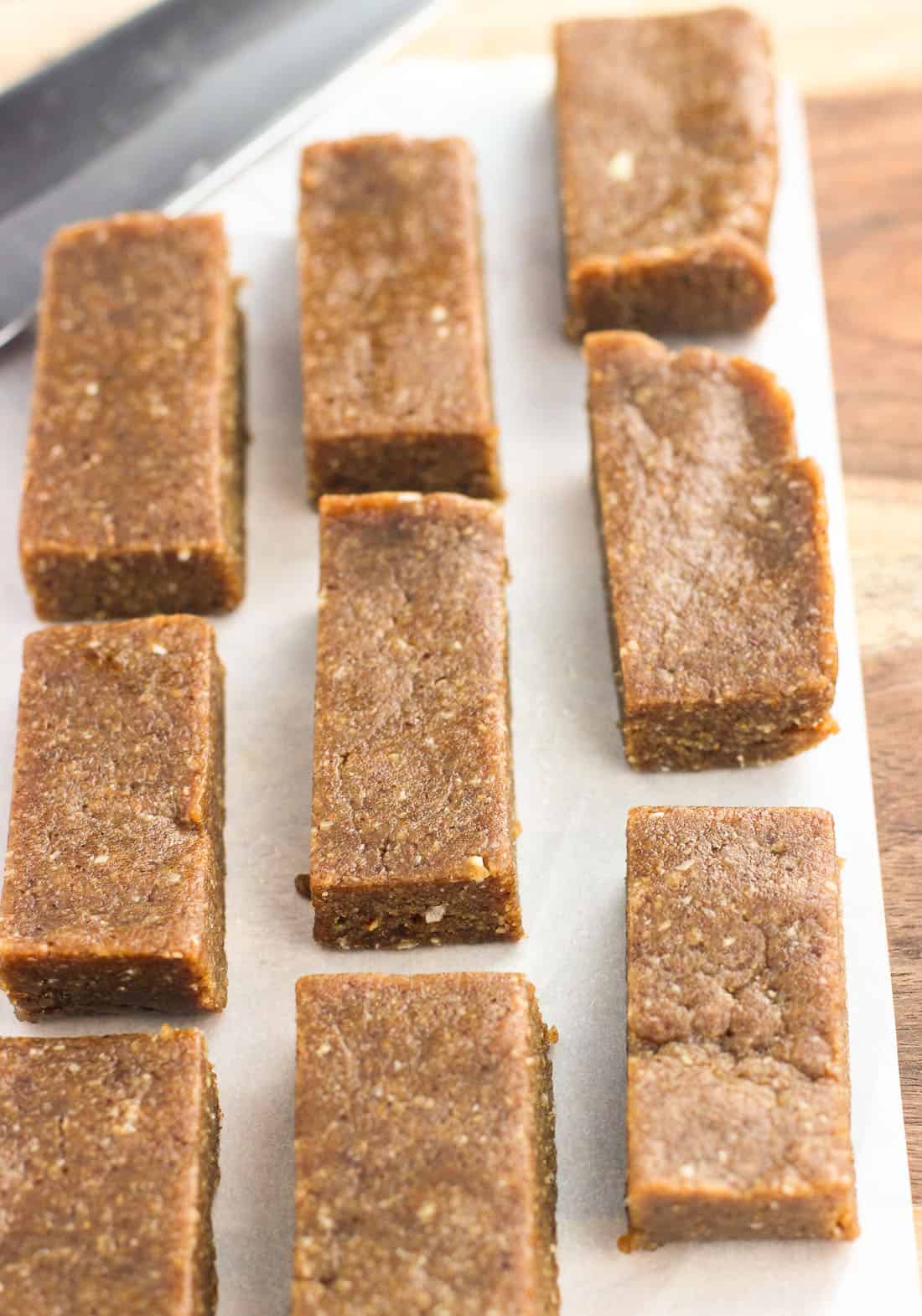 This part's easy. Add all ingredients to the bowl of a food processor and process until everything is evenly combined. There will still be little specks of almonds throughout the mixture.

Then turn out the mixture into a parchment-lined dish and press it into an even layer. Pop the pan into the refrigerator for about an hour, as everything will be a little warm from all the processing. As the bars cool they'll also firm up. Let them firm before slicing.

These bars are dense and chewy, which personally helps me feel that I'm eating a substantial snack and become satisfied. Rather than mindless eating chomping away on pretzels, you know?

One...detractor, let's say, that sometimes comes along with homemade energy bars is that they aren't the best travelers out there, as they tend to lose a bit of structure when they've been left out at room temperature.

I keep these bars stored in the fridge at home, but several times I've taken them to work and left them unrefrigerated for a good 7-8 hours. While they were a little softer, they still held up and weren't messy at all. 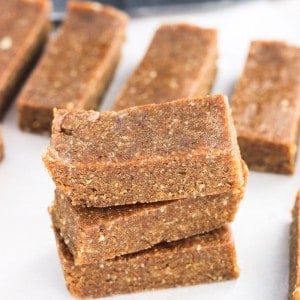 These five-ingredient Coconut Almond Bars are dense and chewy with a consistency like a Larabar. They have a great almond and coconut flavor and are vegan and no-bake!
4.50 from 6 votes
Print Pin Rate
Course: Snacks
Cuisine: American
Prep Time: 5 minutes
Total Time: 5 minutes
Servings: 10 bars
Calories: 173kcal
Author: Alyssa

I suggest keeping these bars in the fridge to maintain their consistency, though I've kept them out at room temperature for 7-8 hours without an issue. They just were a little bit softer.