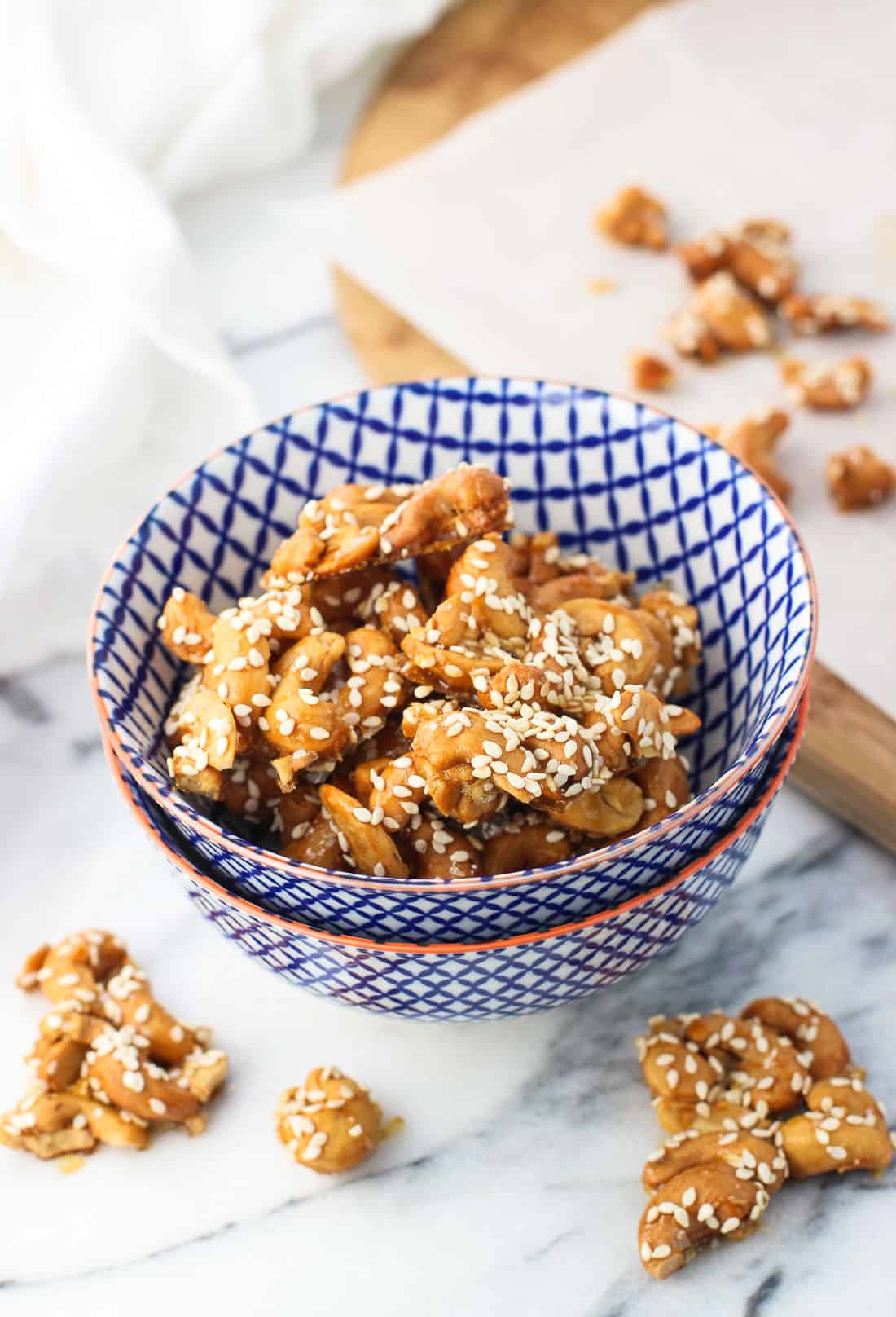 As one does when one receives a fun new coffee gadget for Christmas (a pour over contraption!), we proceeded to overly caffeinate ourselves on a work night and unintentionally forgo sleep for a night. What my mind tends to do when it won’t drift off to sleep is to drift to memories of the food I’ve eaten, and with it being the holidays, a highlight reel of winter treats paraded through my mind.

In particular I kept thinking about the sesame cashew brittle I made last year, but couldn’t justify making another dessert when we’re still getting through this year’s Christmas sweets.

So! Since the flavor profile is pretty straightforward, I knew it wouldn’t be tough to recreate the slight balance between sweet and savory into a healthy snack recipe you can feel good about eating in January (and, of course, year-round). 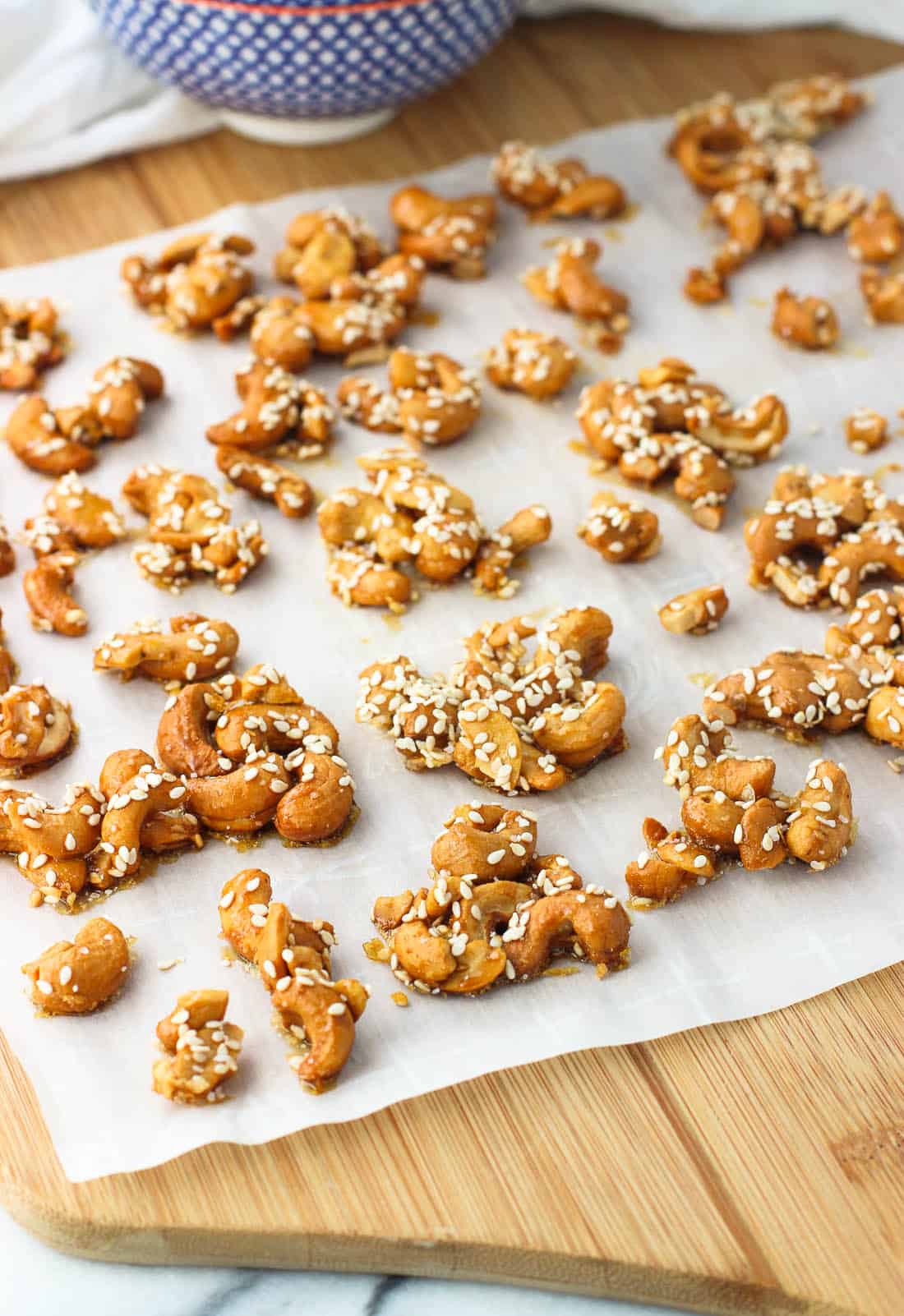 As a semi-pro snack attacker, I am all about these sesame cashew clusters. One of the best parts of this recipe is the simple ingredient list. You’ll need just whole cashews, honey, a little salt, and sesame seeds.

The quantity of ingredients for these honey sesame cashew clusters are customizable to a degree. I wouldn’t use more than two tablespoons of honey to one cup of cashews as that could open up the possibility of them being too gloppy. You can add more salt if you like a more pronounced salty flavor…same thing with the sesame seeds.

On the subject of sesame seeds, I’ve made these cashew clusters with both toasted and raw sesame seeds and I suggest using toasted. The sesame flavor is more pronounced, which I love!

If you don’t have store-bought toasted sesame seeds, you can toast them in the oven beforehand, which might seem like overkill since the cashews get baked. However since the oven temperature is on the lower side, the untoasted seeds in the first batch I made didn’t toast up on the cashews as much as I wanted them to. So pre-toasted is the way to go. 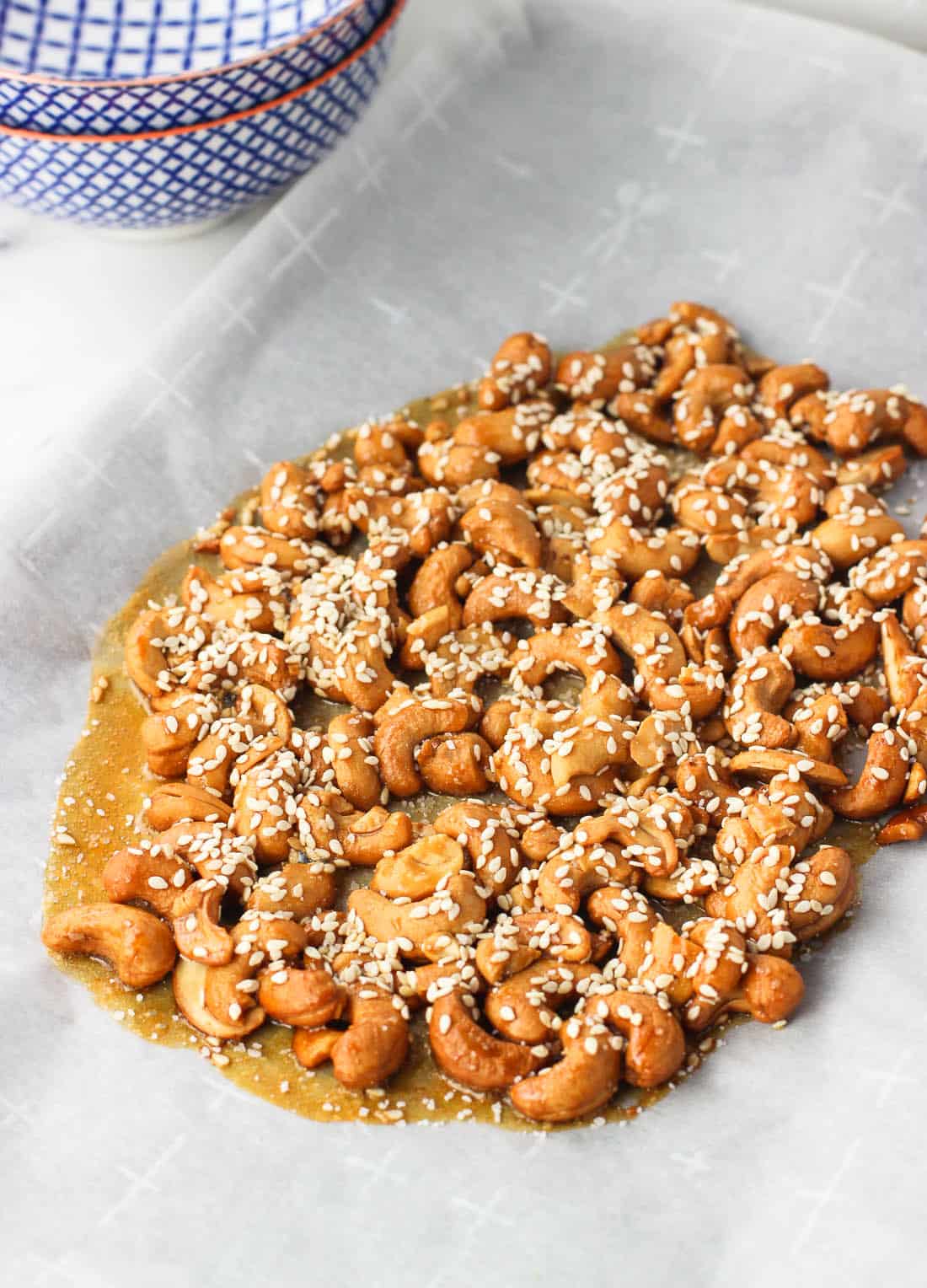 This recipe is pretty basic, but there are a few tips and tricks to simplify the process even more.

Heating the honey before stirring it into the cashews helps it more easily coat them without leaving globs and ensures they’re all covered evenly. It’s a key step in making struffoli, and it comes in handy big time here, too.

Once honey-coated, you’ll also want to press the cashews into a single layer as much as you can to help them roast evenly, then sprinkle with kosher salt and toasted sesame seeds. Sweet, salty, savory goodness.

As the cashews roast (low heat! 300°F), the honey will bubble slightly and then turn a deeper golden color. Once removed from the oven and set out to cool for around twenty minutes, the honey loses most of its stickiness, leaving behind a slight sweetness and hint of honey flavor. 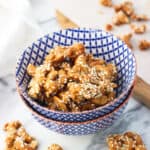 Toasting sesame seeds: If you don't have pre-toasted sesame seeds, preheat your oven to 350°F and place raw sesame seeds on a baking sheet in a single layer. Bake for 8 or so minutes, or until they're becoming golden. Keep a close eye on them as they bake because they can burn easily. Salt: Keep in mind this recipe calls for kosher salt, and not table salt. The coarser flecks of kosher salt are easier to disperse evenly, and give a controlled burst of saltiness you get in a bite without being overly salty.