This sour cream cheesecake recipe is a family favorite! Sour cream adds a wonderful tang to this perfectly sweetened baked cheesecake. An easy graham cracker crust and a simple method of prep (no water bath!) round out this classic dessert staple. 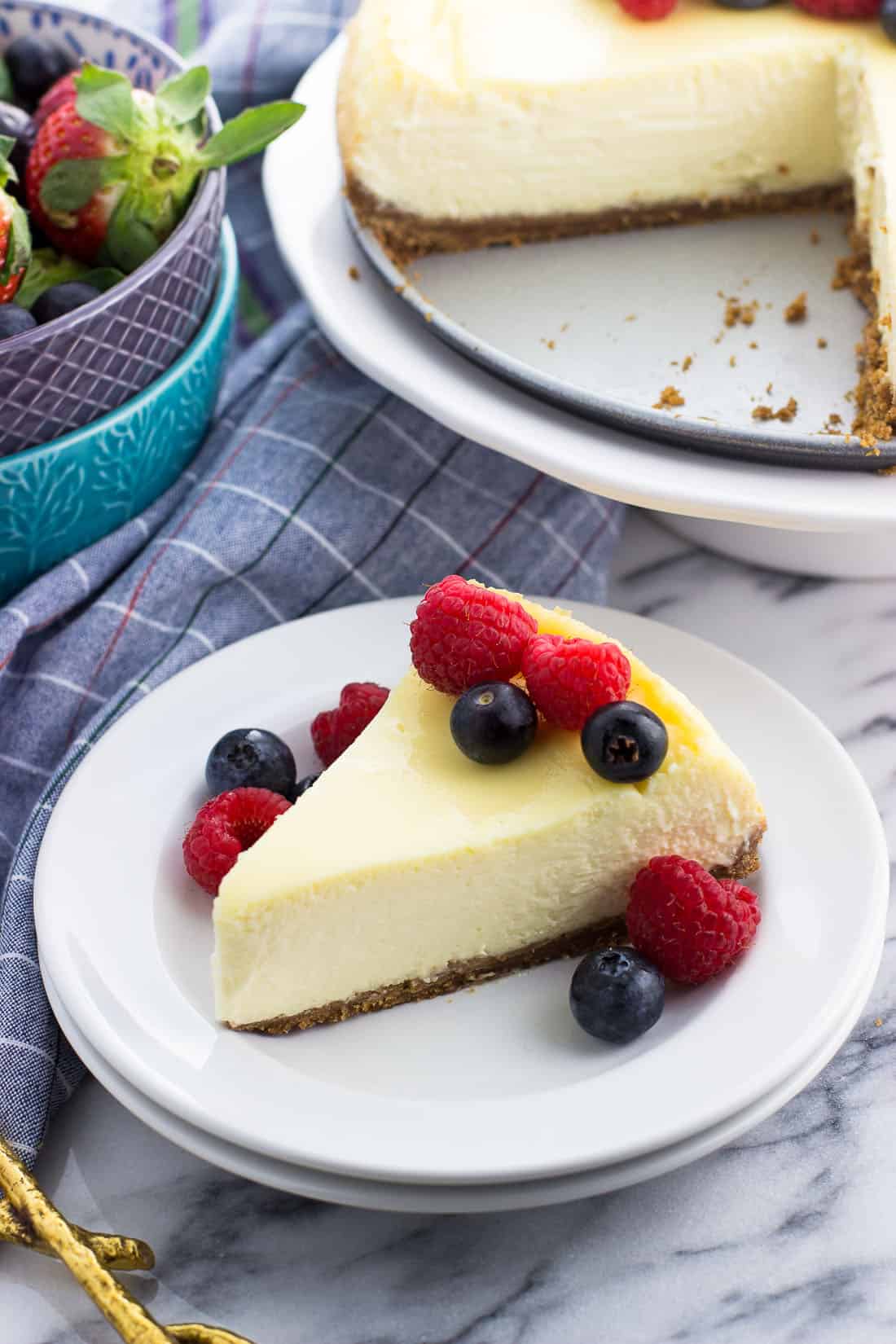 This post has been a long time coming! It’s my mom’s cheesecake recipe, which has been a mainstay in my dessert memory for decades.

As the story goes, many years ago my mom misread a recipe that called for a layer of sour cream to be added to the top of the cheesecake. Instead of reserving some of the two cups of sour cream, she added it all to the batter, only realizing her “mistake” once the cheesecake was already in the oven.

We say “mistake” in quotes because the end result turned out to be the best cheesecake she ever made. With a few additional tweaks, it’s now our beloved family cheesecake recipe.

Perfectly sweetened and creamy with a complementary tang, this sour cream cheesecake is always the star of the dessert table. 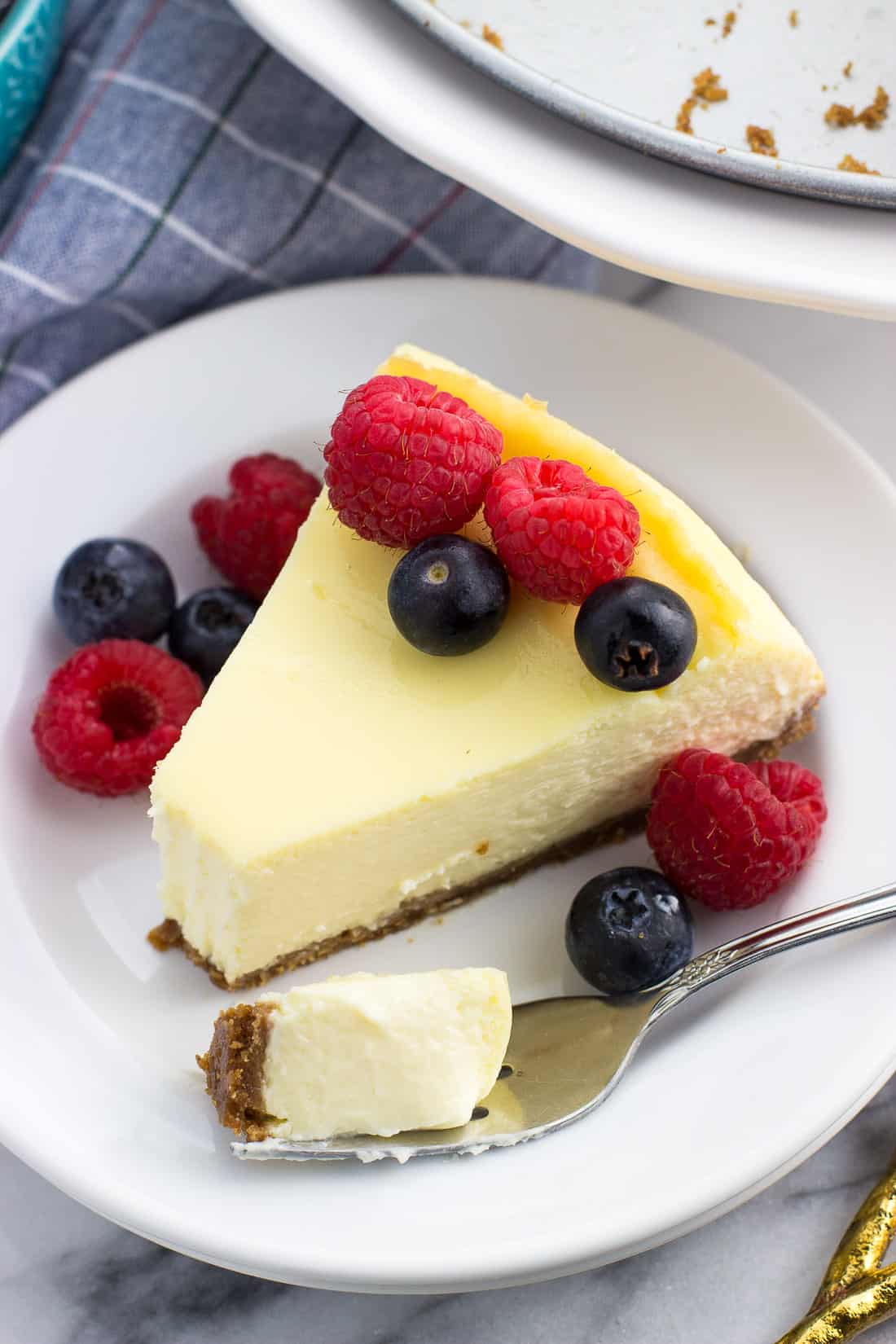 One of the (many) things I love about cheesecake is the simplicity of the ingredients, in both the crust and the filling.

Give the graham crackers a whirl in the food processor to break them up into fine crumbs, then combine them in a bowl with melted butter. Press them into the bottom and sides of a springform pan, then bake for 16-18 minutes, or until set and slightly browned. 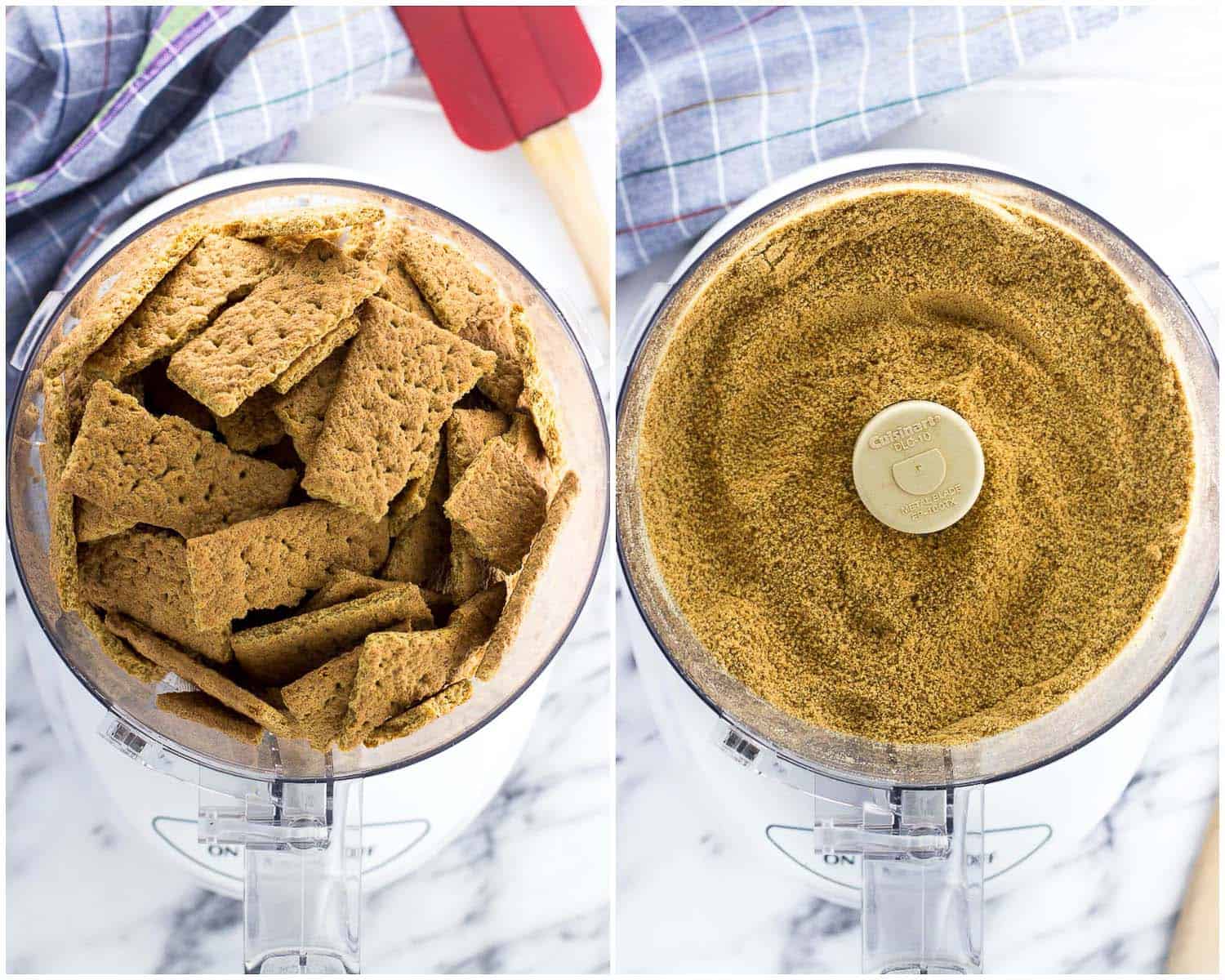 Technically you don’t have to pre-bake the graham cracker crust, but I prefer to as it crisps it up that much more. Homemade cheesecake isn’t exactly an instant gratification type of dessert anyway, so I find this extra step worth it.

For this iteration of sour cream cheesecake I used regular graham crackers, but I’m a *big* fan of using chocolate graham crackers for the crust, too. Either one works!

Psst – if you’re a fan of them, these homemade chocolate graham crackers are always a hit. I wouldn’t go through all that trouble to make them for a cheesecake crust, but they’re a great standalone treat. 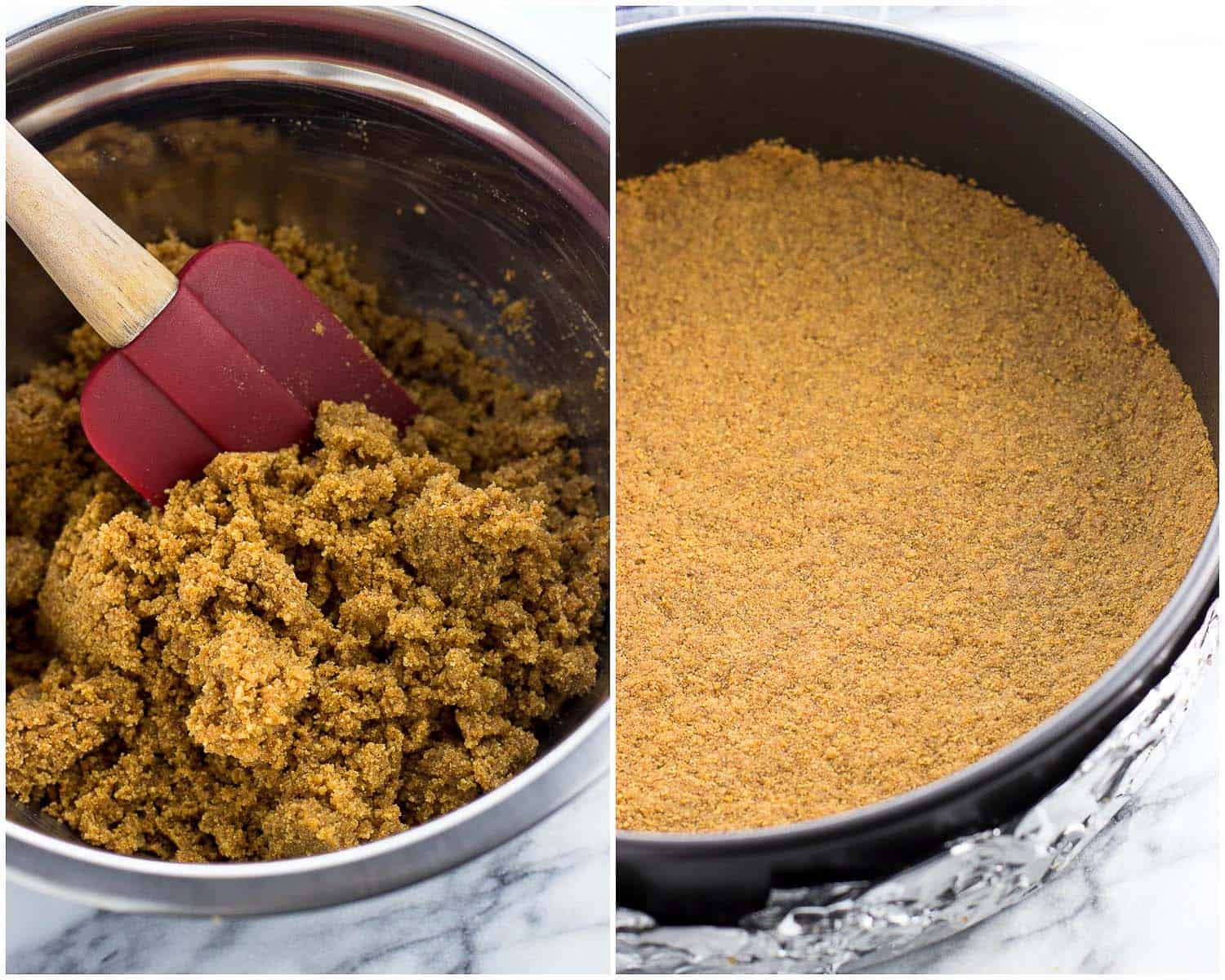 As for the rest of the ingredients, the simplicity continues. You’ll need:

Plus whatever you’d like to serve as a topping/decoration. Fresh berries are my pick. 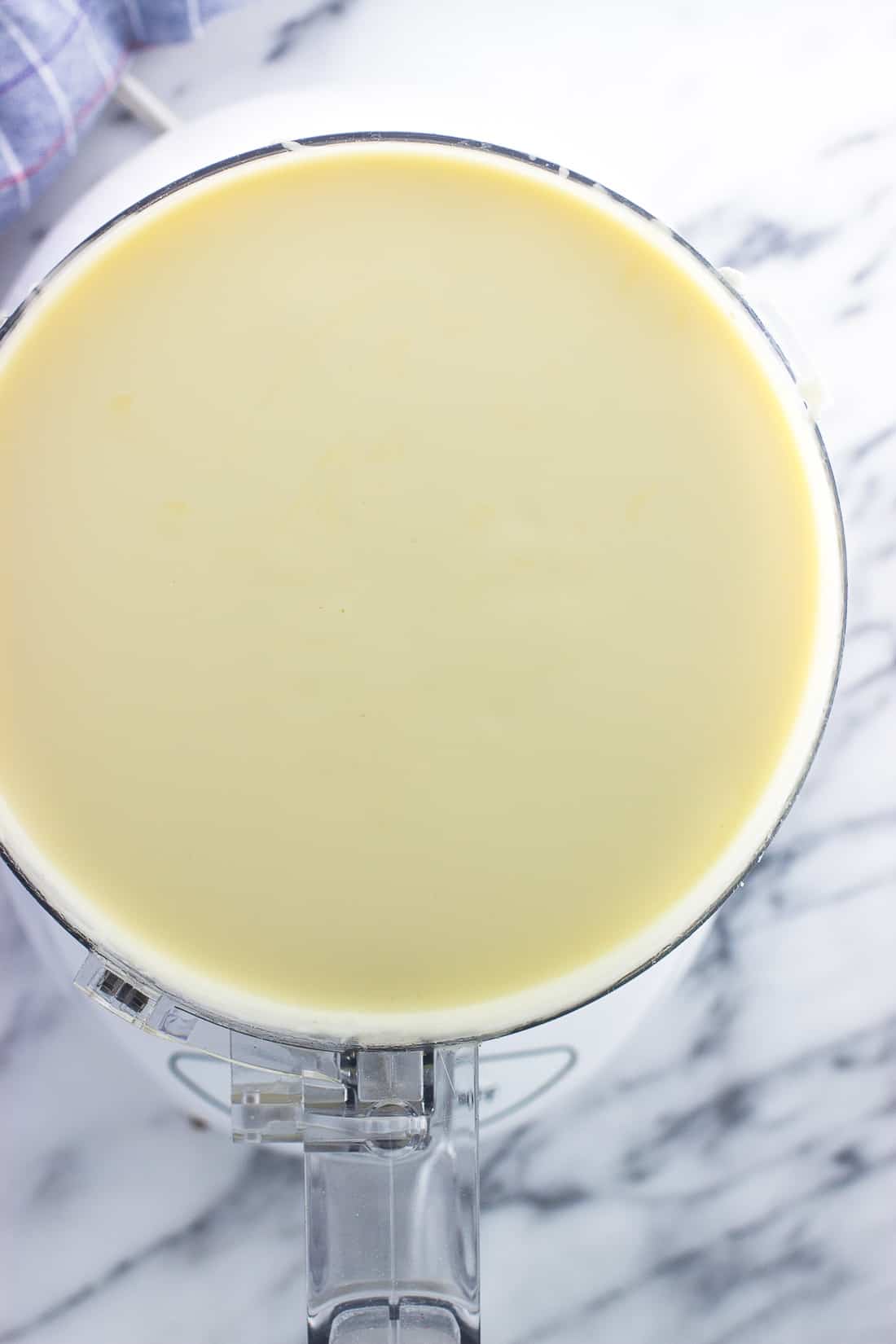 While the ingredients are simple, the steps admittedly get a little finicky.

I’m about to wade into dicey waters here by my next statement, but here goes: I reliably make this crack-less cheesecake in the oven — without a water bath.

Not that I think a crack in a cheesecake is the end of the world. Far from it. My mom never uses a water bath and isn’t as finicky as I’ve become with the method, and if a crack develops in the middle? Well, just throw some berries over top to hide it and keep on moving.

That’s my cooking style most of the time, but I challenged myself to see if I could have the best of both worlds, producing a crack-less cheesecake without the hassle of a water bath.

The answer is yes. 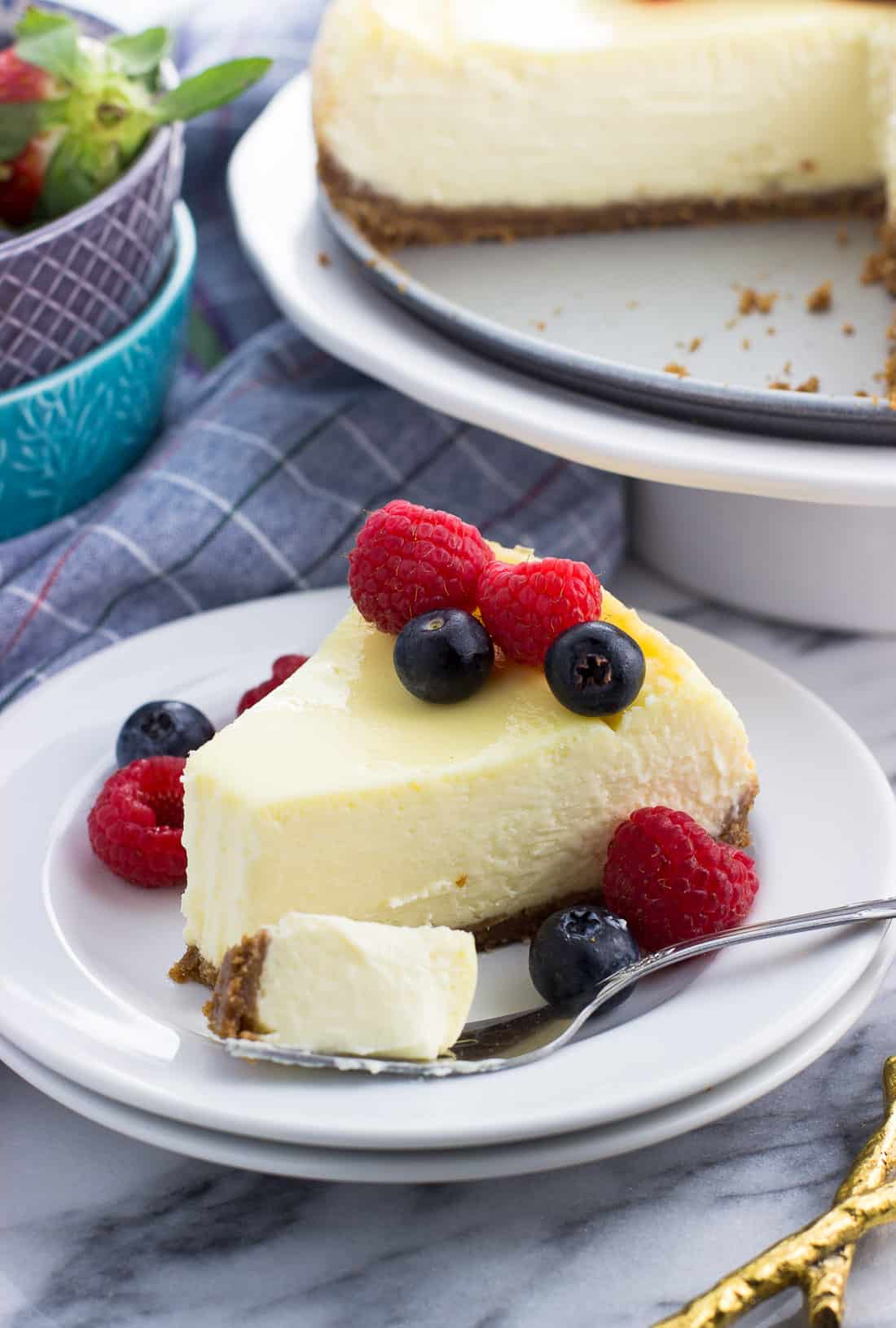 Baking a cheesecake without a water bath

There are several important steps to cheesecake baking for best results and to help ward off a crack.

If you don’t have a food processor (or one big enough), you can use a hand or stand mixer, but go for room temperature ingredients. This way they get combined together quicker, with less opportunity for for air to be incorporated in there. 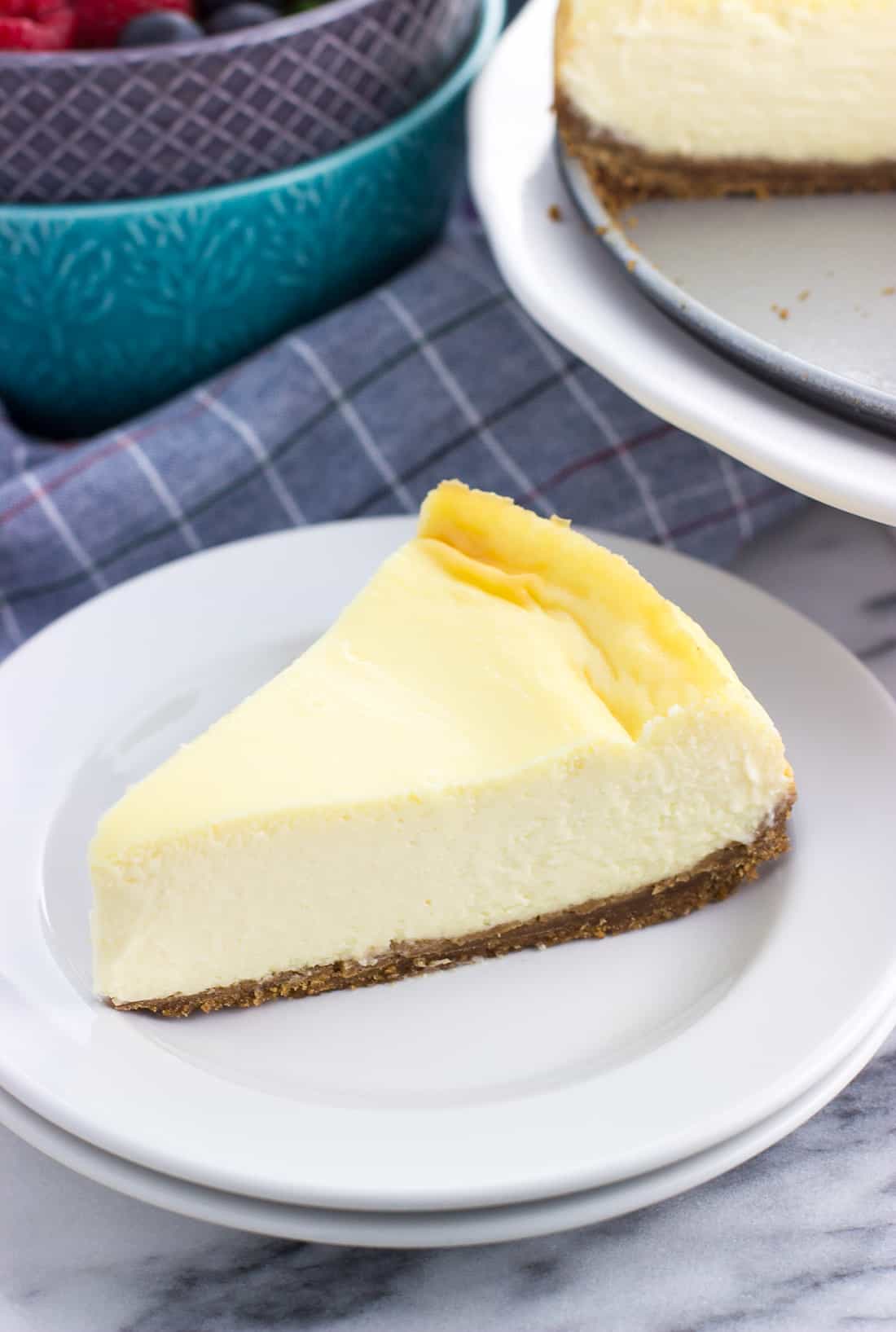 If your first instinct is anything like mine, you won’t want to remove the cheesecake from the oven if the center looks a little liquid-y. It just goes against what we’ve come to know works with baking, you know?

But power through that feeling! This sour cream cheesecake is done baking when the very center is still looking a bit liquid-y and jiggles. The residual heat will continue cooking it as it sits at room temperature to cool down, so waiting until the top is firm firm will likely overdo it. 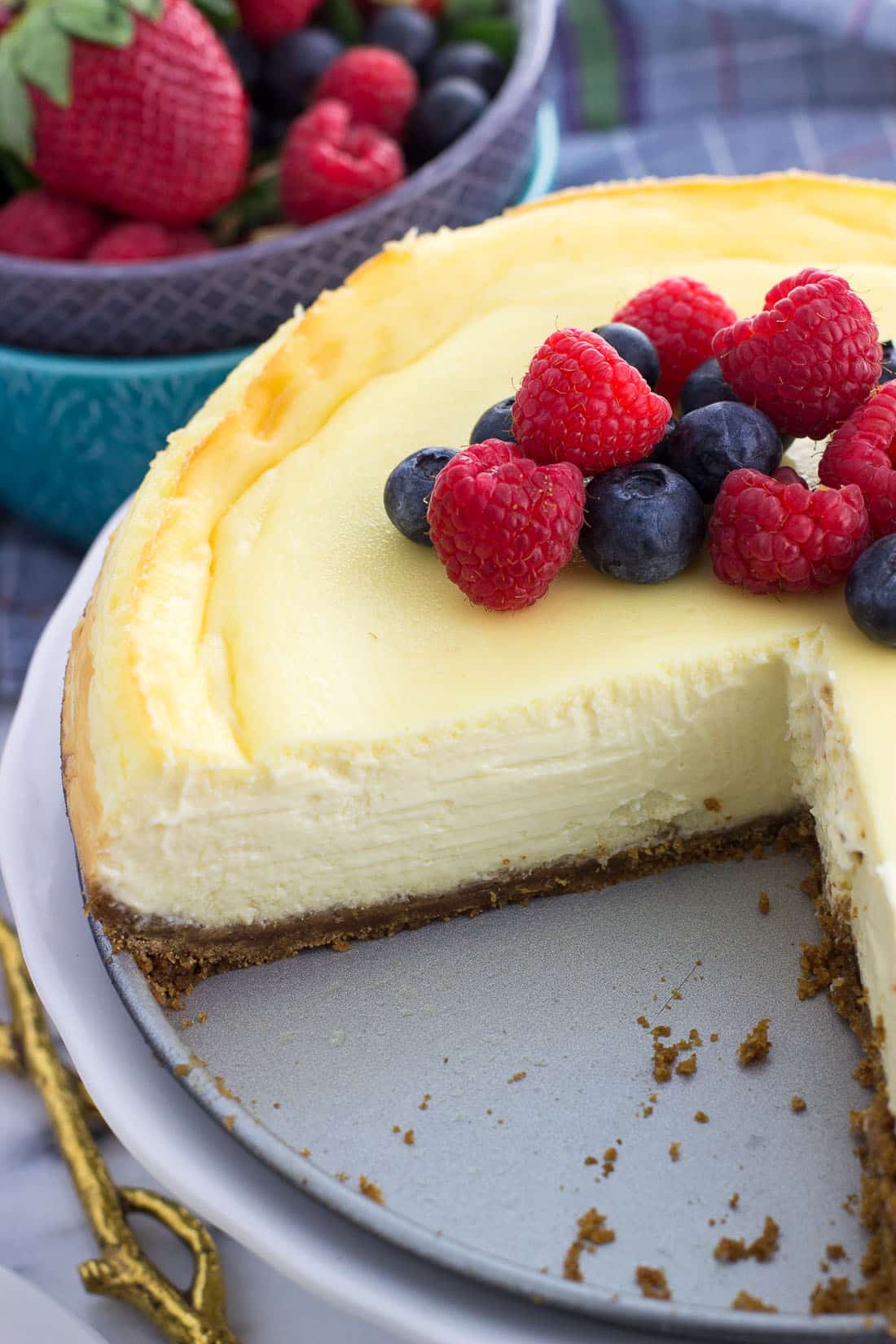 Once the cheesecake is out of the oven, right away you’ll want to carefully run a thin spatula or paring knife along the edges to gently separate the cake from the pan. This way as the cheesecake cools, it can contract with the surface intact.

Otherwise the sides of the cheesecake will stick to the pan, causing a crack to form in the middle.

After that’s done, let the cheesecake have ample time to cool gradually out at room temperature before chilling in the refrigerator. And that’s it! After being sufficiently chilled, your (hopefully crack-less) cheesecake will be ready for slicing, serving, and enjoying.

For the graham cracker crust:

If you don't have a food processor: 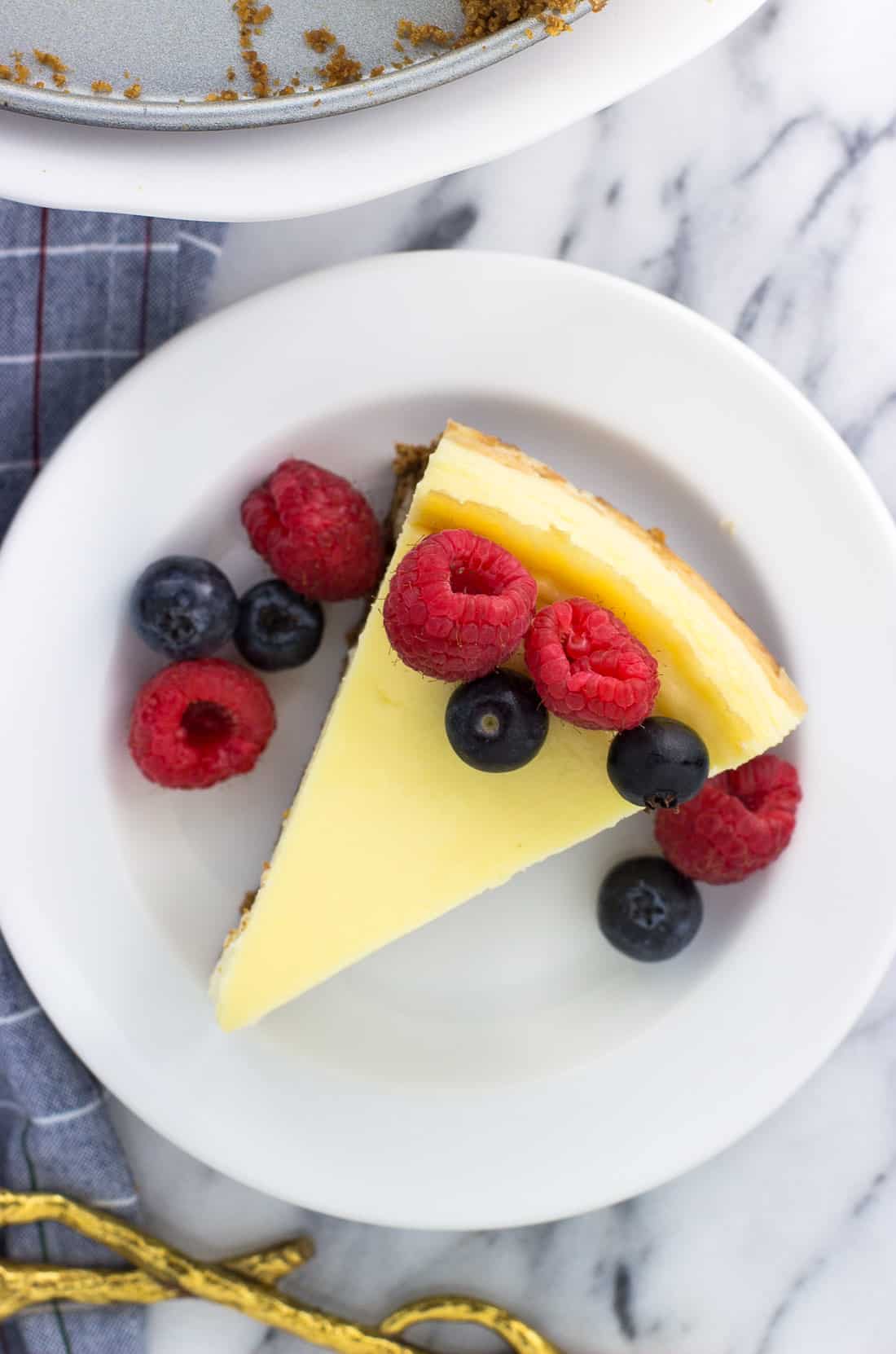