This recipe for roasted sesame teriyaki Brussels sprouts turns a sometimes ‘whatever’ side dish into something your peeps will request! A flavorful, five-ingredient glaze coats these Brussels sprouts, which are roasted until crisp and browned. Top with plenty of sesame seeds.

Maybe this sounds familiar. You’re out at a restaurant when a waiter/waitress walks by with a tray and *sniff sniff* – I need whatever is causing that aroma in my life immediately. Then comes the task of trying to discreetly eye up the table (without being a creep) to Nancy Drew it and figure out what dish it is on the menu.

This happened not one, but twice with the same smell at one of our favorite local restaurants before we figured out it was Brussels sprouts. Brussels sprouts! Cue the horror. Yes they smelled heavenly, but I was in the company of someone who didn’t think they liked Brussels sprouts. Obviously feeling wild and crazy, we took a gamble, ordered them, and proceeded to scarf them down like they were going out of style.

We loved them so much, these roasted sesame teriyaki Brussels sprouts, inspired by the game-changing restaurant version, are quickly becoming our favorite side dish, no matter the cuisine. 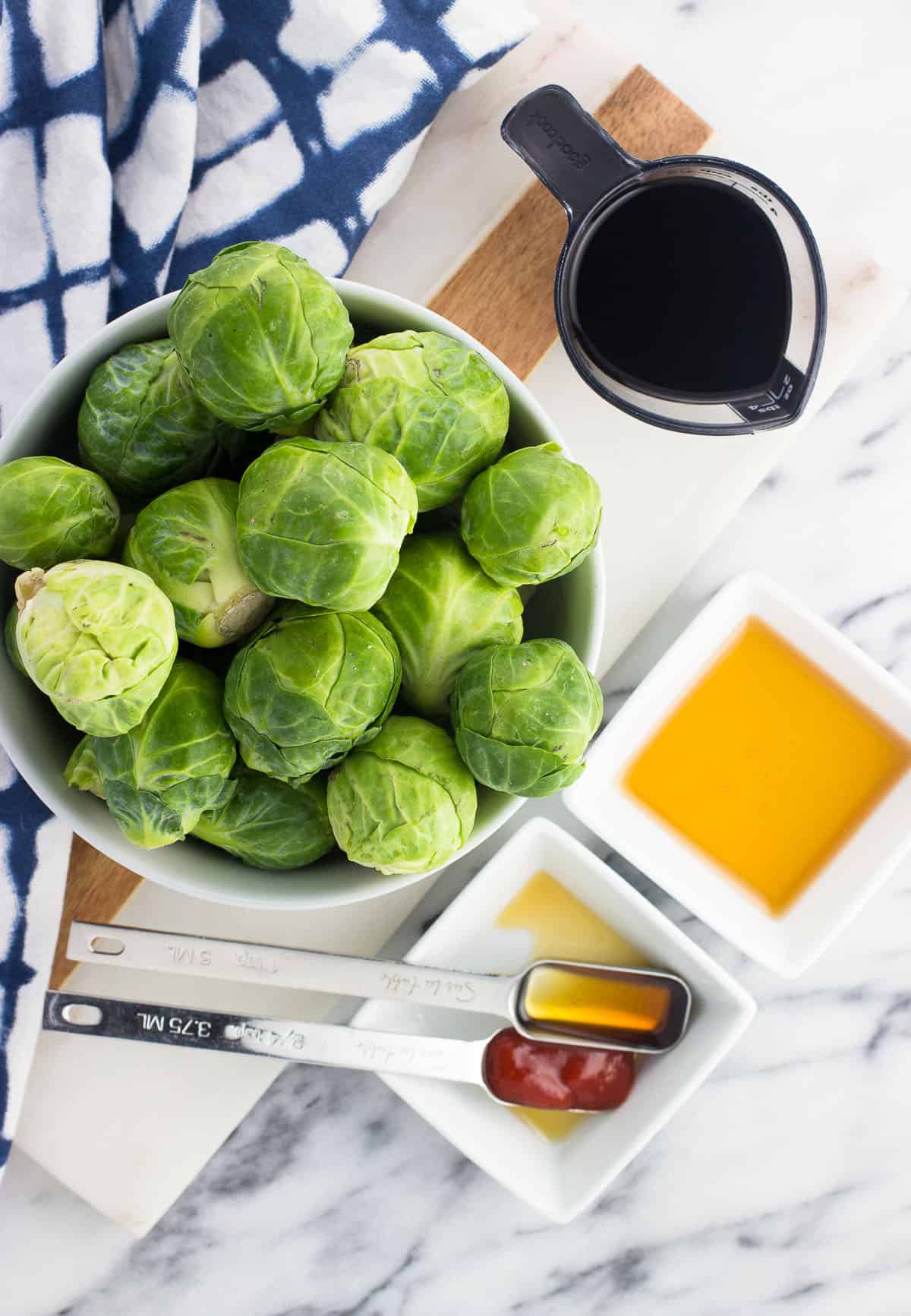 These Brussels, like those Brussels, feature an excellent Asian-inspired glaze that uses pantry staples.

Now I don’t know exactly the ingredients in the restaurant version, but this homemade one consists of teriyaki and soy sauces, honey, sesame oil, and sriracha. If you don’t have teriyaki sauce you can just use all soy sauce instead. If you’re out of honey you can use maple syrup. And no sriracha? Chili garlic sauce (or even crushed red pepper flakes) would be a fine substitute.

This recipe really has a lot of wiggle room so you can make it your own. 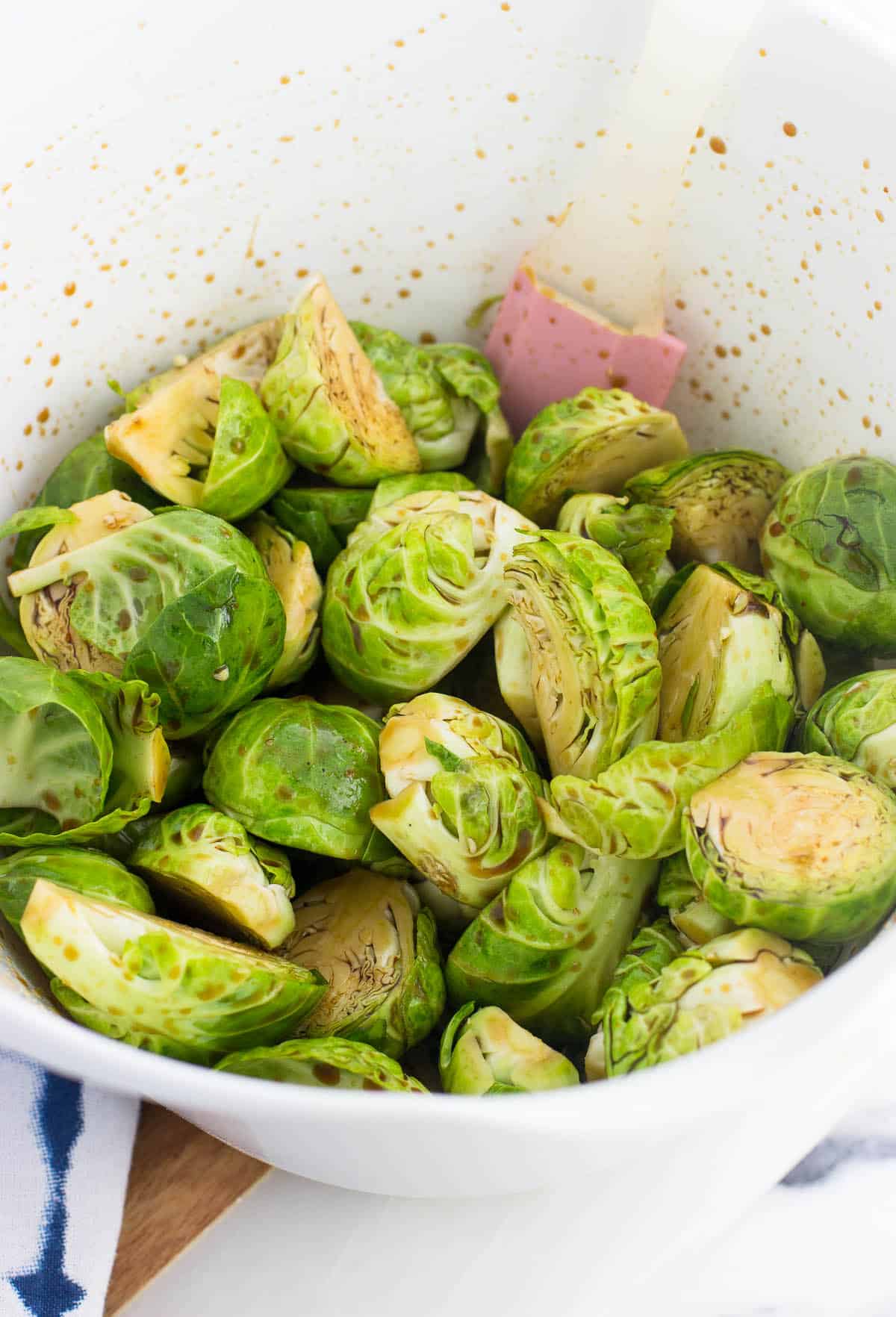 First set your oven to 400°F to allow it time to preheat. Then prep your Brussels sprouts. Remove any yellowing outer leaves, give them a good rinse, and then slice them in half.

You’ll want all of the Brussels sprouts to be around a similar size so they roast in the same time in the oven, so if your bunch includes any massive ones, you may need to quarter them instead.

Arrange the teriyaki Brussels sprouts in a single layer as spaced out as you can, then roast for around a half hour, stopping halfway through to give them a flip so all sides can get nice and deeply golden-brown. Once they’re roasted to your liking, serve warm with toasted sesame seeds. 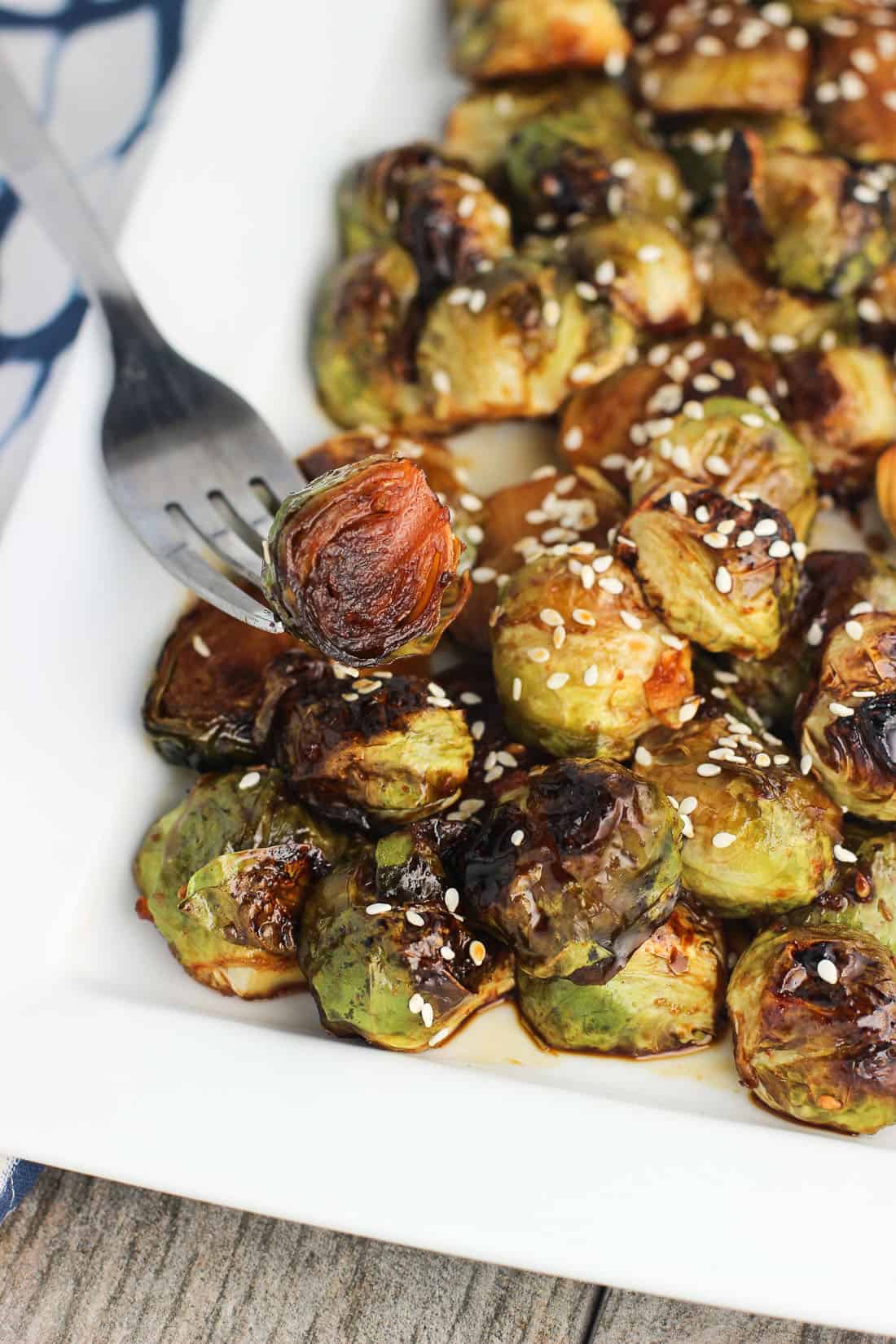 Brussels sprouts roast alongside the main protein in this sheet pan tofu and Brussels sprouts recipe. Drizzling the roasted veg and tofu with homemade peanut sauce is my recommended take for this one.

And while these sauce ingredients may not seem like they go together, balsamic peanut chicken stir fry with Brussels sprouts is a family favorite in my house. All those flavors mesh together SO well. 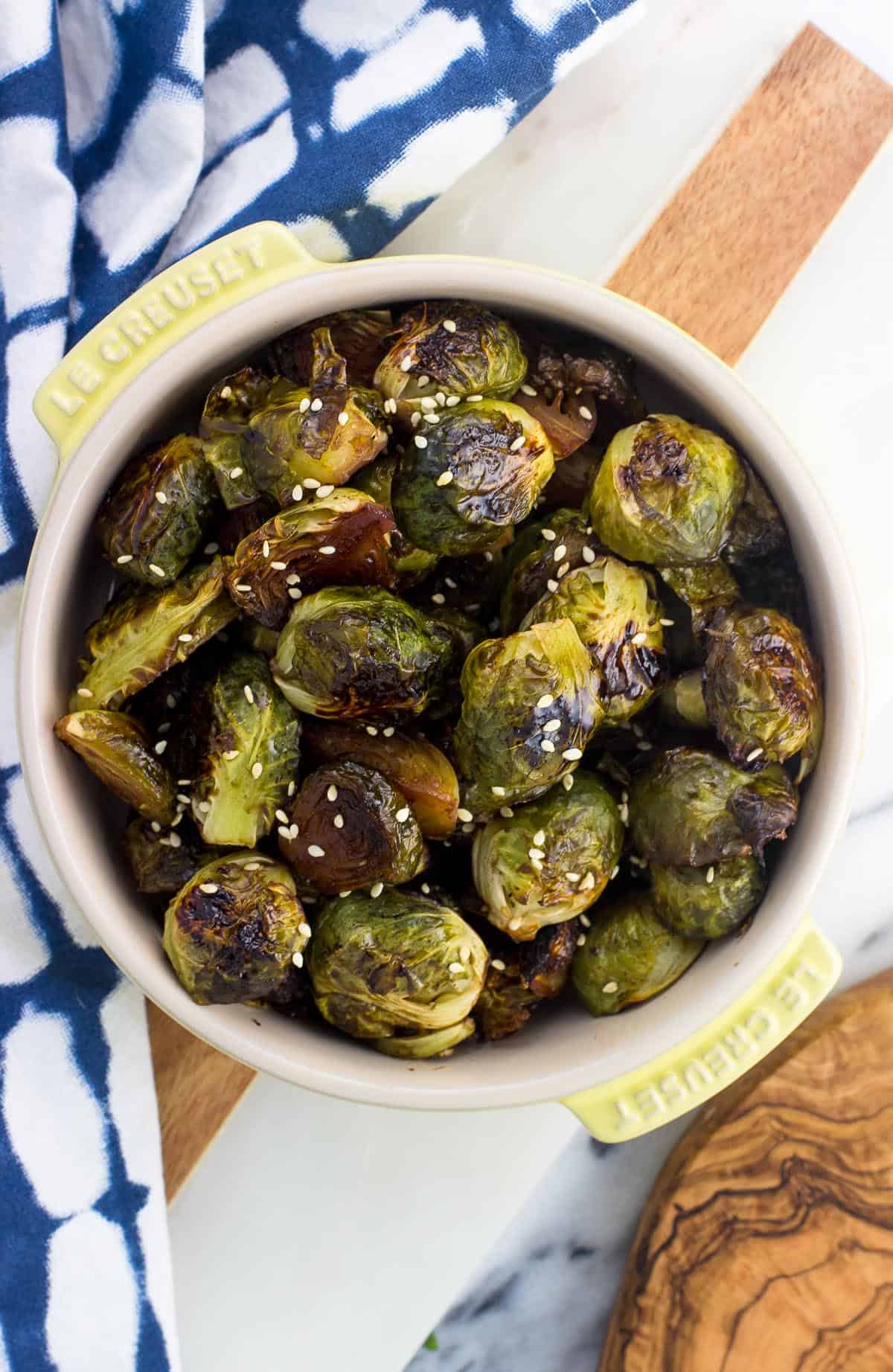 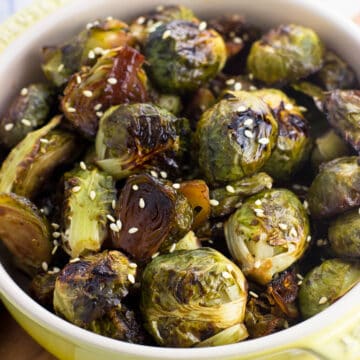 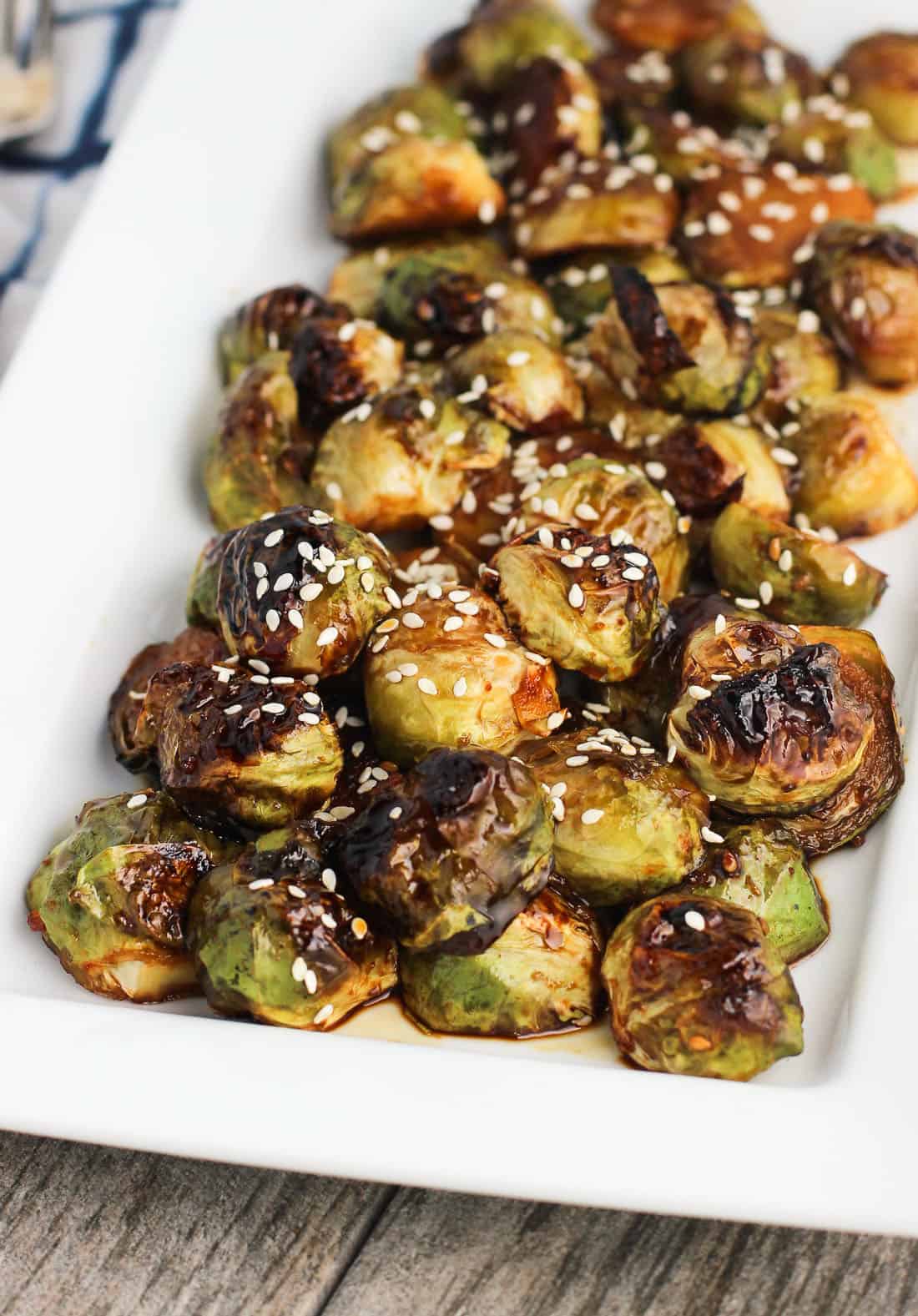