Fresh ginger and club soda make this ginger lemonade a sparkling warm weather treat! An easy ginger simple syrup both sweetens this homemade lemonade recipe and provides just enough of a ginger flavor without much of a bite. 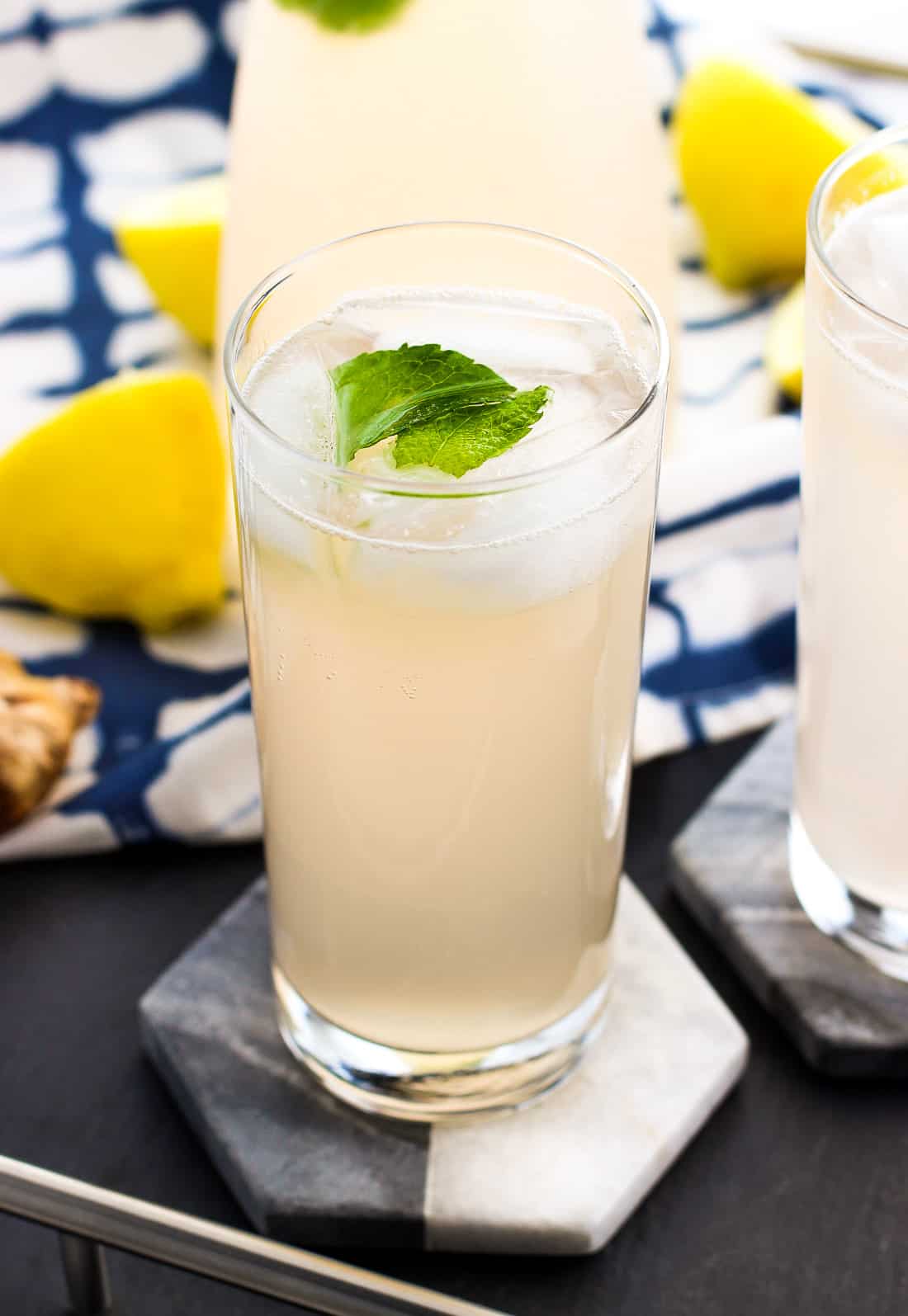 It’s lemonade season! And iced tea, cold brew coffee, and frozen drinks season. And 90-degrees-and-humid-bad-hair-days season, but we won’t get into that one.

Lemonade in all forms is always welcome in these warm weather months, but I wanted to make a more grown-up version for sipping on when it’s hot and sunny out, but your to-do list is a mile long and lounging around living the rosé all day life isn’t going to fly.

Just a few, inexpensive ingredients are needed for this pleasantly sophisticated and adult, yet non-alcoholic summer sipper. In addition to water, you’ll need:

We’ll need around one cup of freshly-squeezed lemon juice, so five large lemons or six or seven smaller/medium ones usually do the trick.

Then the sugar and fresh ginger are used in making a ginger simple syrup. This simple syrup brings all of this ginger lemonade’s sweetness, as well as a ginger flavor that works so well in lemonade.

Simple syrup is the way to go when sweetening cold beverages like lemonade, iced tea, and cocktails. Because the sugar dissolves while the syrup is heating on the stovetop, it will be perfectly liquid-y and not gritty whatsoever when it comes time to sweeten your cold drinks.

And last we have club soda, which replaces some of the typical water in a homemade lemonade recipe for a healthy fizz. 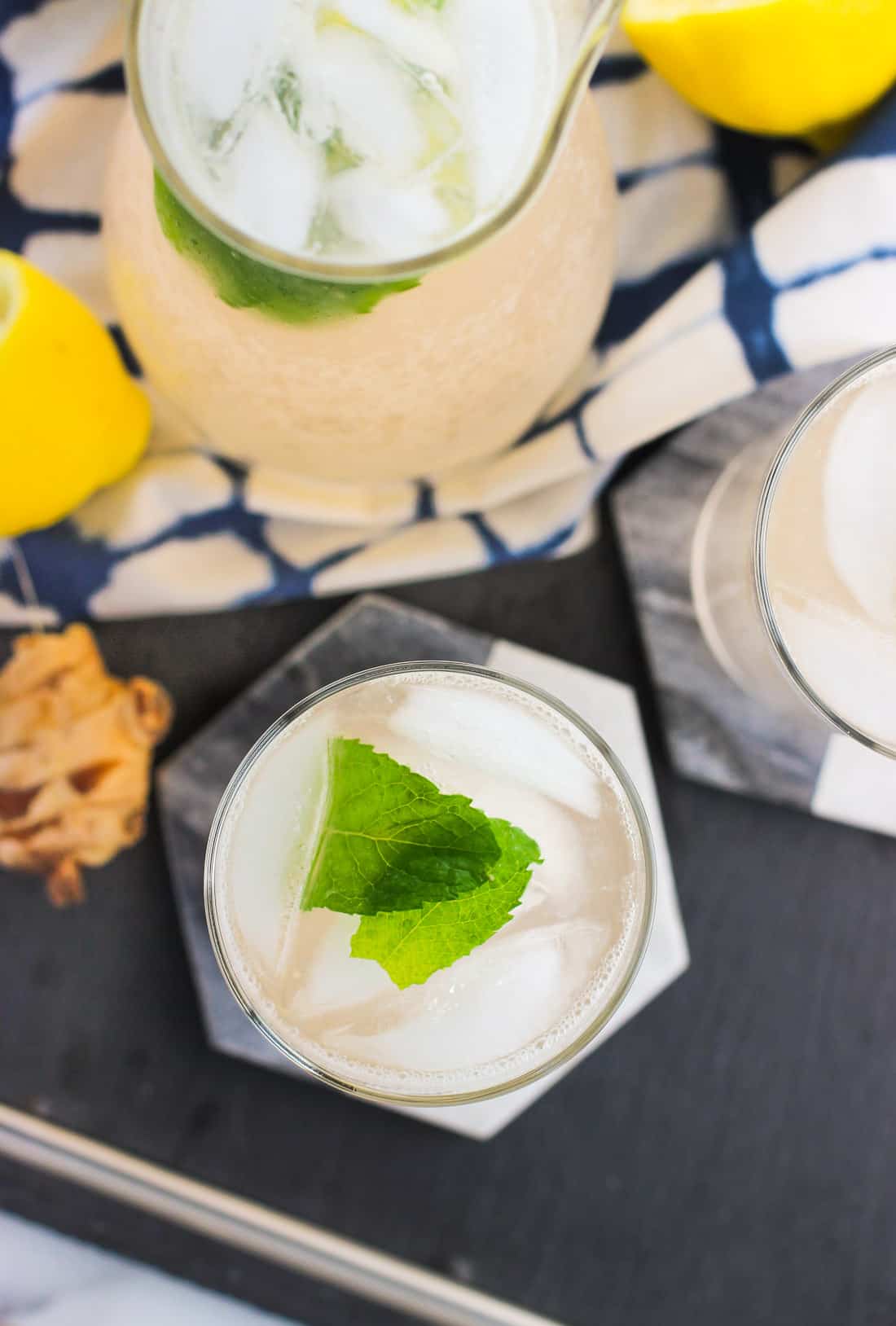 To make the simple syrup, bring equal parts water and sugar to a boil with fresh ginger slices, then let steep for 20-30 minutes. Next strain out the ginger, and there you go. A lemonade sweetener and extra flavor addition all in one.

This ginger lemonade recipe would be perfect for those of you with a mandolin, because you’ll want the ginger slices to be as thin as possible so the syrup has a bold flavor. I’m not a mandolin owner, so I very carefully sliced the ginger and it worked fine. But it would definitely be easier and quicker with a mandolin.

Once the ginger syrup chills, you’ll squeeze some lemons as you would for all lemonade recipes, but an easy switch takes this ginger lemonade to the next level – club soda!

Subbing in a liter of club soda for water added to the lemonade when it’s being stirred up gives it an effervescence sort of like kombucha, except for all that fermentation going on there. I also added a cup of cold water along with the club soda to mellow out the flavor a bit, but that step is up to you.

If you find the flavor of this ginger lemonade too strong even after preparing the recipe as written below, just add additional water (or club soda) until it reaches your liking. 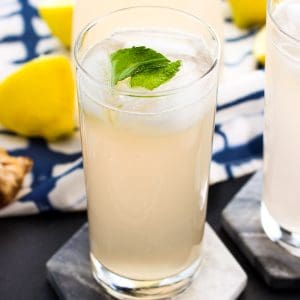 For the ginger syrup:

Inactive Time: The total time here is mostly inactive. Of the 45 minutes of inactive time, 25 minutes is for the ginger syrup to steep, and 20 minutes is for the syrup to chill in the fridge. Ginger: If you don't have a kitchen scale, four ounces of thinly-sliced fresh ginger is approximately one cup. Mint Option: If you add mint leaves to this sparkling ginger lemonade for serving and then store extra servings in the fridge, the lemonade will take on more of a mint-ginger flavor as time goes by. Yield: This recipe yields 12 oz of ginger syrup, all of which I used in this recipe.