‘Tis the season to go a little pumpkin crazy with desserts (just like your entire Pinterest news feed this time of year…), but a girl can only take so much before needing a sugar time-out. At least this girl can. So what to do with the inevitable portion of leftover pumpkin puree after you’ve exceeded your pumpkin cookie/muffin/bread/cake/donut quota for the moment? Make something savory! 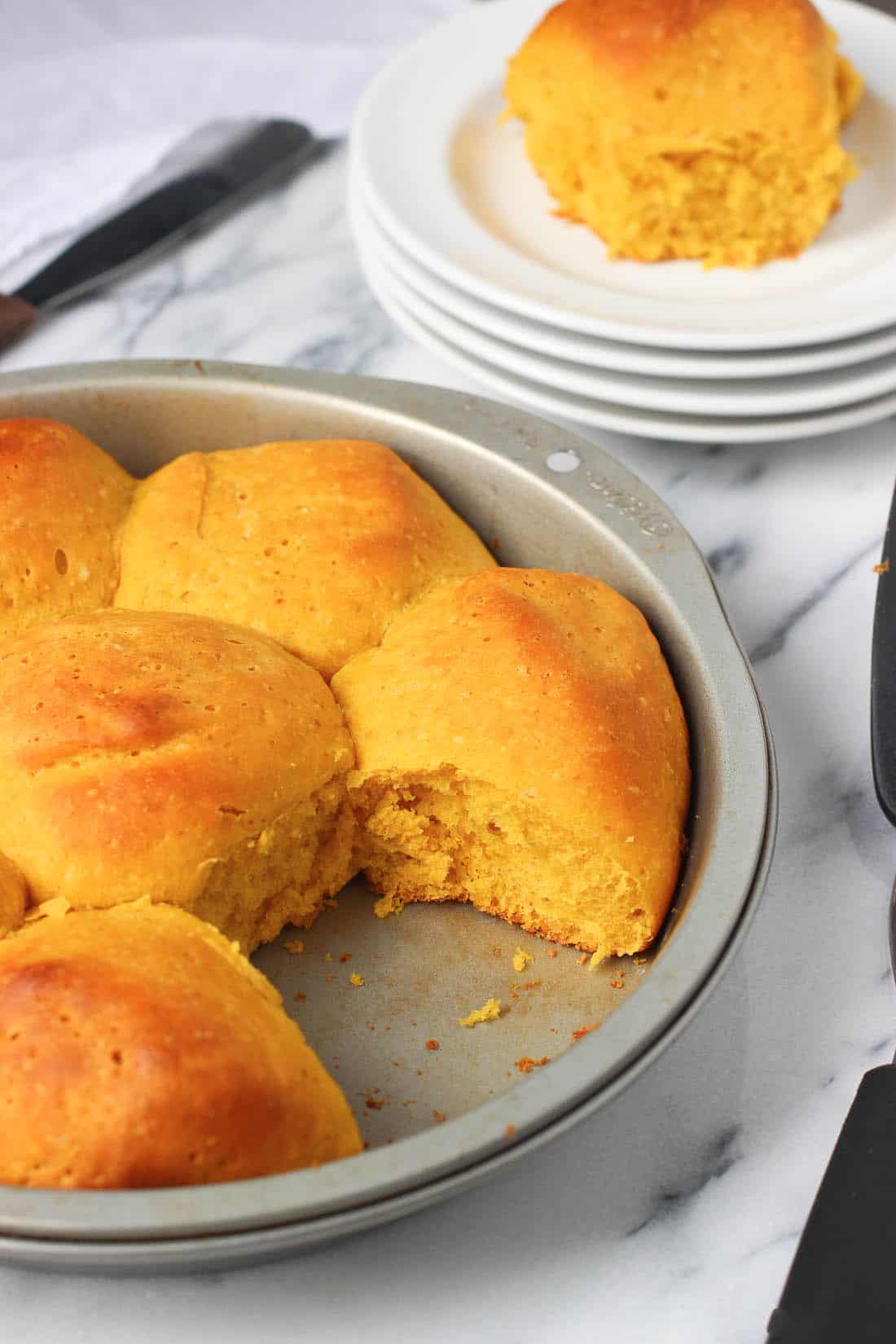 I can’t be the only one whose sweet tooth waves the white flag sooner than later, right? I, of course, do love me some sweets, but after I get my fill, my cravings pretty quickly dart back on the savory side of things. Lately for “dessert” I’ve gotten into the habit of dipping back in the fridge for a few bites of dinner leftovers. I’m not sure if our dinners have been extra on-point the last few weeks or what, but I’m going to roll with it. 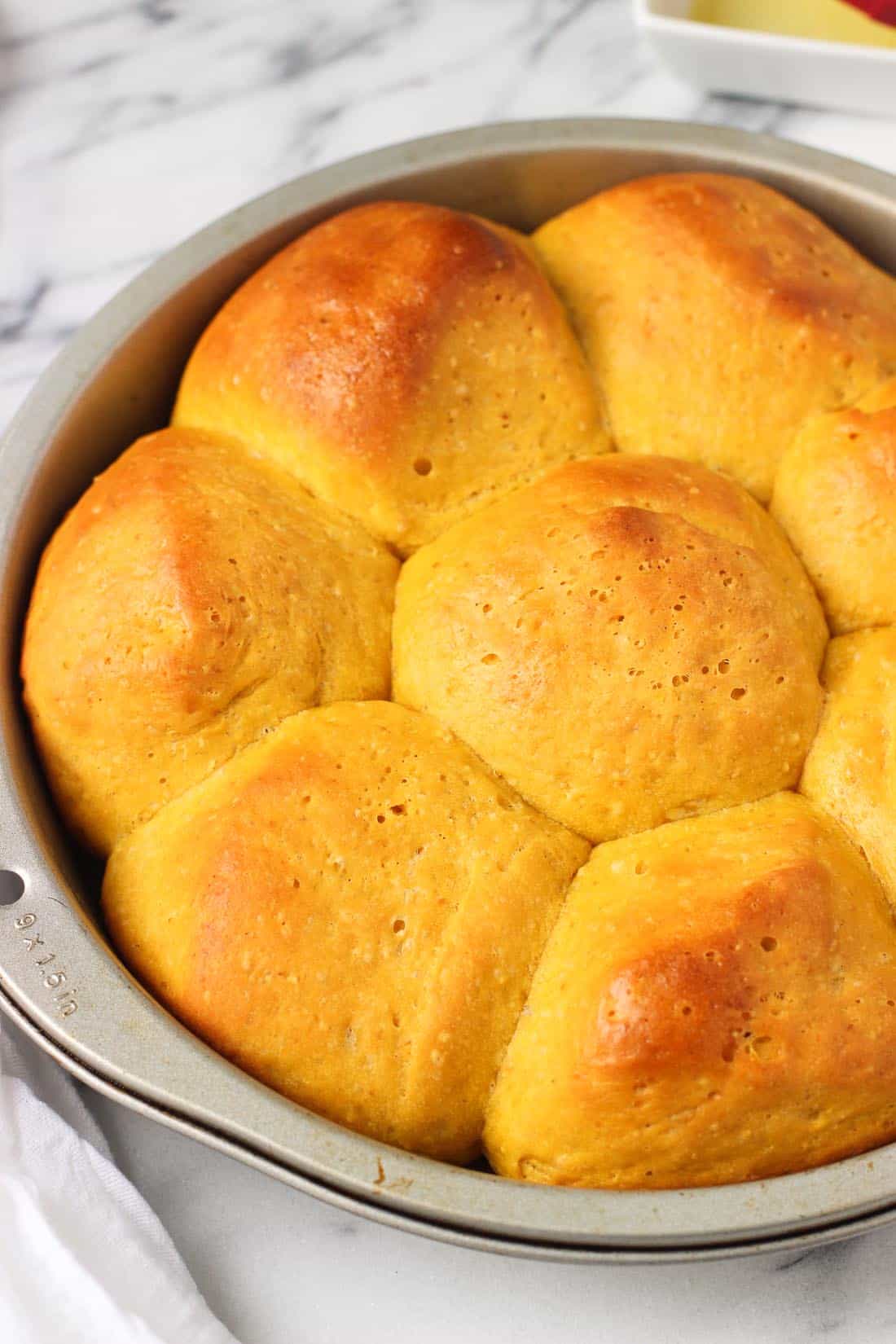 Growing up I can’t remember eating dinner rolls at home that often, but my mom made a pizza dough for the ages. I’ve been dabbling around in other dough recipes which certainly haven’t disappointed, but hers was special because it was heavy on the olive oil. Olive oil in the dough, olive oil brushed on the dough, olive oil drizzled over the pizza…olive oil everywhere. Just like it should be, right?

Since pumpkin pizza dough seemed a little too much on the PUMPKIN ALL THE THINGS scale (even for the perfectly fall-like weather we finally got a taste of this weekend here in Nashville), a bread recipe to accompany dinner seemed like the perfect compromise. 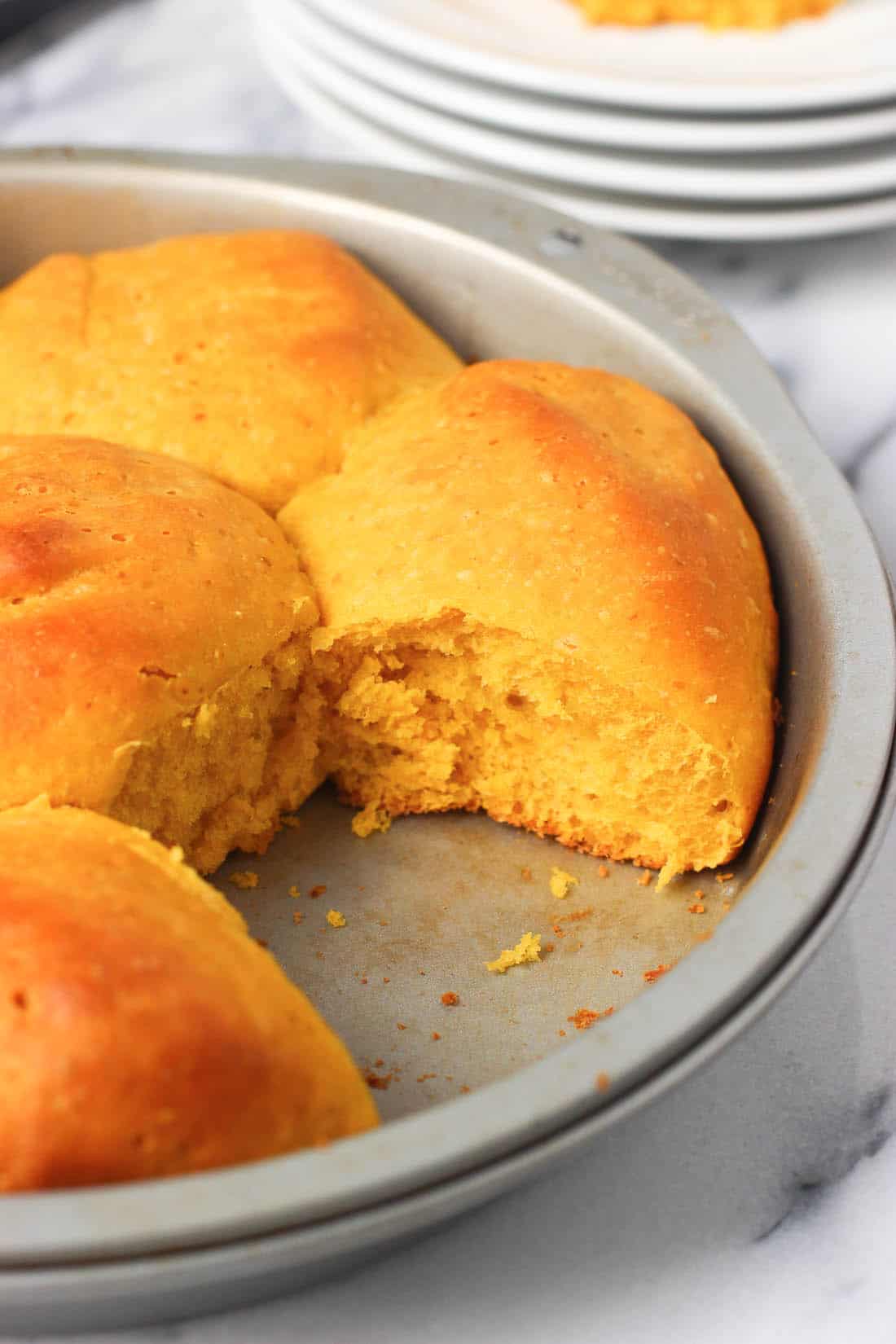 These pumpkin olive oil rolls are tender and fluffy, with the perfect bit of denseness. I realize that totally sounds oxymoronic (fluffy vs. dense), but it really describes these rolls. The olive oil, egg, and pumpkin puree in the dough add moistness and substance, so slicing and smearing a pat of butter or sopping up excess sauce won’t cause them to mush up and crumble. All the while the yeast works its magic and makes these babies rise, baby, rise.

The pumpkin puree adds moistness and a nice festive touch of orange coloring to the batter, but it doesn’t add too much in the way of flavor. So don’t worry about your dinner rolls tasting like pumpkin pie. 🙂 I suppose if you really enjoy pumpkin spice you can add a little pinch of cinnamon, nutmeg, ginger and cloves, but I preferred to keep things simple and savory without. What you can taste however is the olive oil, which is one of my favorite flavors to feature in bread. 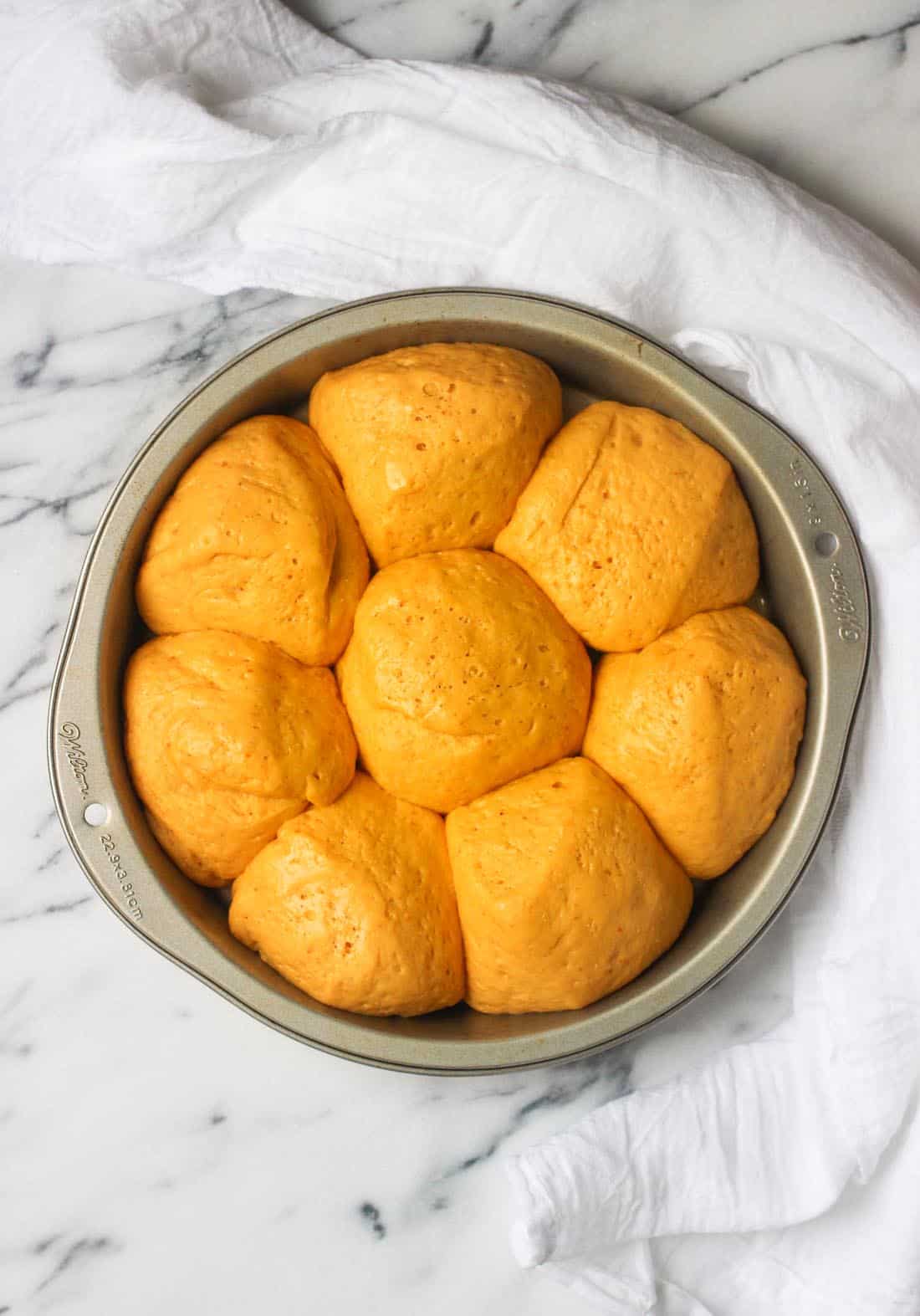 If you’re relatively new to yeast-based breads, this recipe is a straight-forward and simple place to start. All of the ingredients (including the yeast) are combined in a bowl and mixed together. The dough rises once as one big ball, and then is split into eight equally-sized pieces and left to rise again in the pan. A brush of olive oil over top of the rolls both pre- and post-bake, and you have yourself a batch of pumpkin olive oil rolls waiting to be your next dinner side dish, slider bun, or rip-off-pieces-and-eat-plain snack. I can vouch for all three. 😉 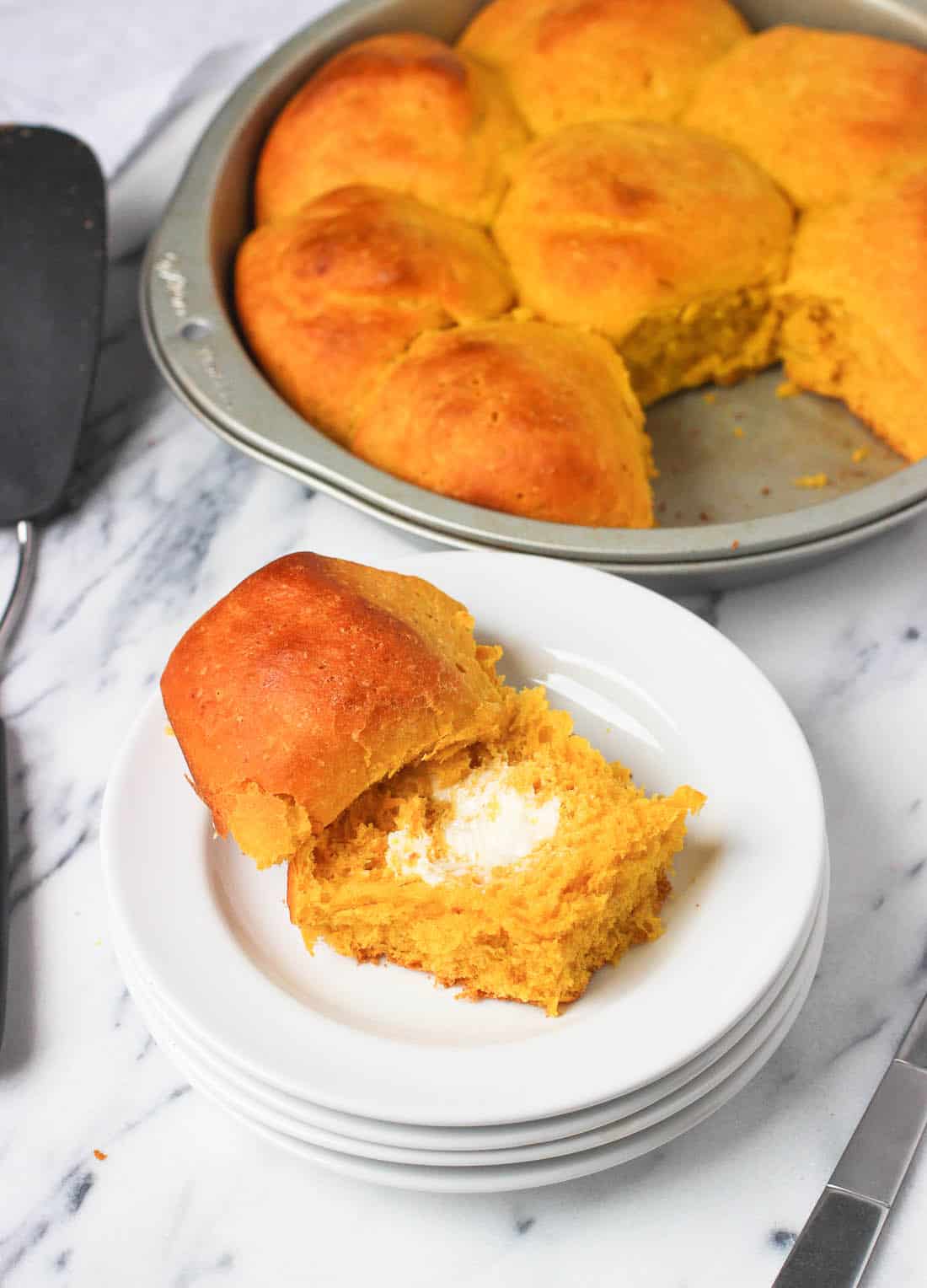 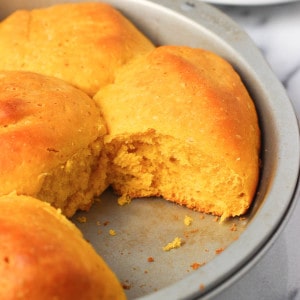 *Be sure to use 100% pumpkin puree and not pumpkin pie filling, which has sweetener and spices added to it.