You know what I really hate to do? Waste things. When I was little, I always wanted to save things, because surely I'd need a stockpile of wrapping paper scraps and empty glass bottles. In case of a decoupage emergency or something. Through the years I've (thankfully) learned to part with many could-be craft supplies, because while I can have ideas for days, the reality is that I won't get around to crafting all of my grand plans.

Food, though...food is a different story. You've spent money on ingredients, spent time preparing whatever it is that you're making, and seeing both of those things thrown into the garbage is all kinds of frustrating. Plus if you're making something, there's a good chance that you're hungry, and your stomach has already set its expectations accordingly. Having to abandon your plans and start fresh is apt to pitch even the most even-tempered into the throes of hangriness. Look. out.

So when you first get that nagging feeling that your recipe is headed off the tracks, ask yourself the following questions:

1. Can you cut it into small pieces and bake it a different way?

2. Is the taste spot-on but the presentation...lacking?

3. Can you cover it in frosting and/or sprinkles to make the whoops go away?

4. Can you cut off the offending piece?

5. Is it feasible to rename whatever it is and pass it off like something else?

Regarding point #5, it's all about managing expectations. Depending on what you're making (and how much you talked it up beforehand), you may not have much lead time before you realize your recipe's going south, so sometimes this is unavoidable. For example, if you've been raving about a gigantic cinnamon roll for days and have gotten someone else craving it, having them witness you frantically scurrying around the kitchen in search of your muffin pan might dash their dreams a bit (sorry, B!). Likewise, promising to bring a loaf of banana bread somewhere and showing up with a plate of cookies that suspiciously looked like they contained bananas and chocolate chips might be, well, awkward. So, in the ideal scenario, "Hey guys, I made banana bread biscotti crisps!" sounds a whole lot better than "well, I was going to make a loaf of bread, but then x, y, z happened...". A whoops indeed (but still better than showing up empty-handed).

In the couple of months since starting My Sequined Life, I've encountered SO. MANY. kitchen whoops I can't even begin to tell you. Under-seasoning french toast so it tastes just like eating...soggy bread. Forgetting to grease the pan so the mini loaves that I envisioned would look so cute in a photo turned into a crumby (and unpictured) mess. Breathing a sigh of relief that we had just the amount of eggs necessary for a recipe...and then dropping them on the floor. The list goes on.

Most of the time these whoops go undocumented (for good reason), but here are two recipes I resurrected by using a mix of the techniques above.

Synopsis - I saw this beer in the store. Thought it would be all sorts of clever to use it to make banana bread. Not so.

The Whoops - Everything was seemingly fine - the batter looked normal, the loaf was rising in the oven, etc. Took it out of the oven to cool and the thing deflated until it was barely 1"-tall. A dense banana bread brick.

The Fix - Cut it up and bake it again (#1 above). I sliced the loaf into ¼"-thick slices, laid the slices down on their sides on a cookie sheet, and baked them until the edges were golden brown and they were crisp throughout. From banana bread brick to banana bread biscotti crisps within 10 minutes. 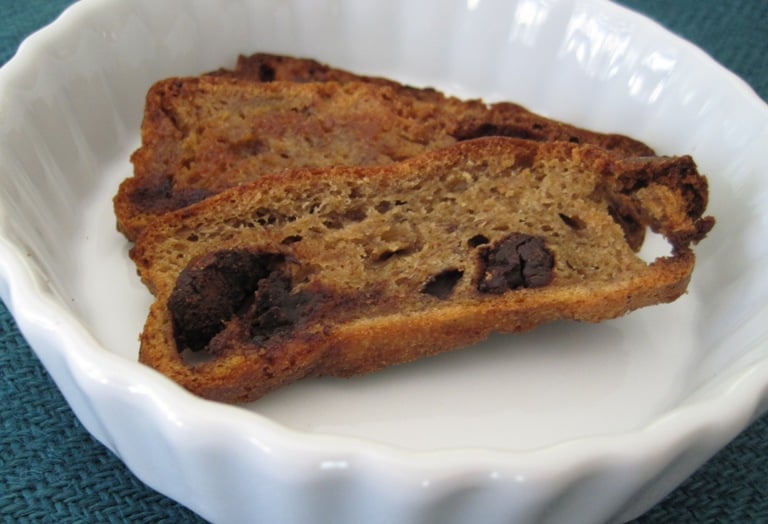 Synopsis - This giant cinnamon roll cake on Sally's Baking Addiction stopped me in my pinning tracks on Pinterest. Doesn't it look incredible?? I showed it to B and said I'd make it for New Year's Day breakfast (setting expectations...my first mistake). The problem with a New Year's Day breakfast that requires rising time? New Year's Eve festivities, that's what. I slept in until 10:00 AM (what!) and thought I could have my cake - literally - and eat it too by still making the cake but taking a few shortcuts (my second mistake).

The Whoops - I won't even share with you my methodology here, but it involved a tube of store-bought dough, a gloppy, undercooked center, and a few tears of frustration. I knew what I needed to do here was to fix undercooked cinnamon rolls, stat.

The Fix - Grab your muffin tin (#2 above). I ripped my half-crispy-half-raw monstrosity of a breakfast into small pieces and placed them into eight greased muffin tins. I popped them back in the oven, placed a loose tent of aluminum foil over the top halfway through so that they didn't crisp up too much, and removed when everything was cooked through. Drizzled some glaze over top and voilà - Pull-Apart Cinnamon Roll Muffins were born. 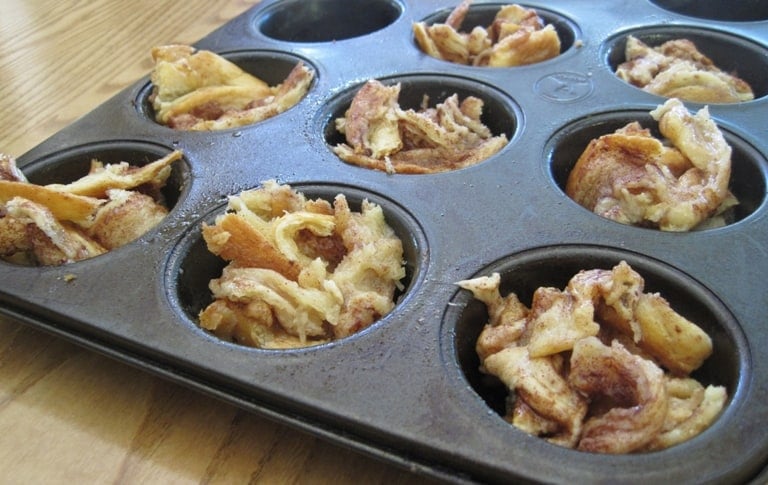 The finished product - Cinnamon Roll Pull Apart Muffins. Doesn't look like such a whoops after all, now does it? In fact, got B's seal of approval!

Of course there are plenty of times when what you're making hurdles past the point of rescuing (I will run screaming from unintentionally-curdled milk), but hopefully with an assortment of tools and a dash of creativity you can fix a recipe whoops into something that's beyond just edible, and maybe even a little delicious.