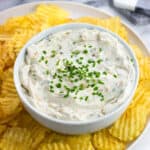 The secret to some people's sour cream and onion dip is using a box of dried soup mix. The secret to mine is that it's half Greek yogurt.

I considered naming this recipe "healthy sour cream and onion dip", but I don't even think it needs that modifier. You won't even know the Greek yogurt is in there, and that's coming from someone who's pretty cautious with subbing plain yogurt in recipes because I feel like I can always taste it.

In the absence of soup mix we have lots of onion flavor coming from not only two diced-and-caramelized onions (see how to caramelize onions for the classic sliced way) but dried onion flakes, as well. Combined with other pantry staples, this flavorful French onion dip makes a great appetizer for watching the game or any time!

How far in advance can I make sour cream and onion dip?

This dip is best made the day before you'd like to serve it, though it's totally fine to eat earlier once it's chilled. Extra time allows the flavors to meld even better.

What can I serve with it?

How long does it stay?

This dip will stay for around 3-4 days (kept refrigerated). The onions may release a bit of moisture, so give leftover portions a nice stir before serving. Because it's dairy-based, this dip is not a good candidate for freezing. 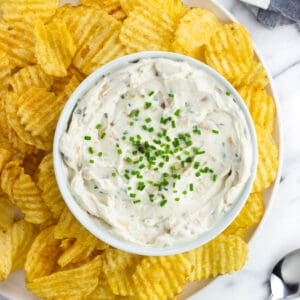 Sour cream and onion dip is so easy to make from scratch! With a sneakily lightened-up base, this homemade sour cream and onion dip is bursting with onion and has the classic flavor you know and love. Perfect for Game Day.
No ratings yet
Print Pin Rate
Course: Dips
Cuisine: American
Prep Time: 30 minutes
Cook Time: 1 hour
Total Time: 1 hour 30 minutes
Servings: 16
Calories: 64kcal
Author: Alyssa