This Creamy Lemon Spinach One-Pot Pasta is a satisfying and simple weeknight meal that takes just 30 minutes to make! There's no need to drain the pasta and it's dairy-free. 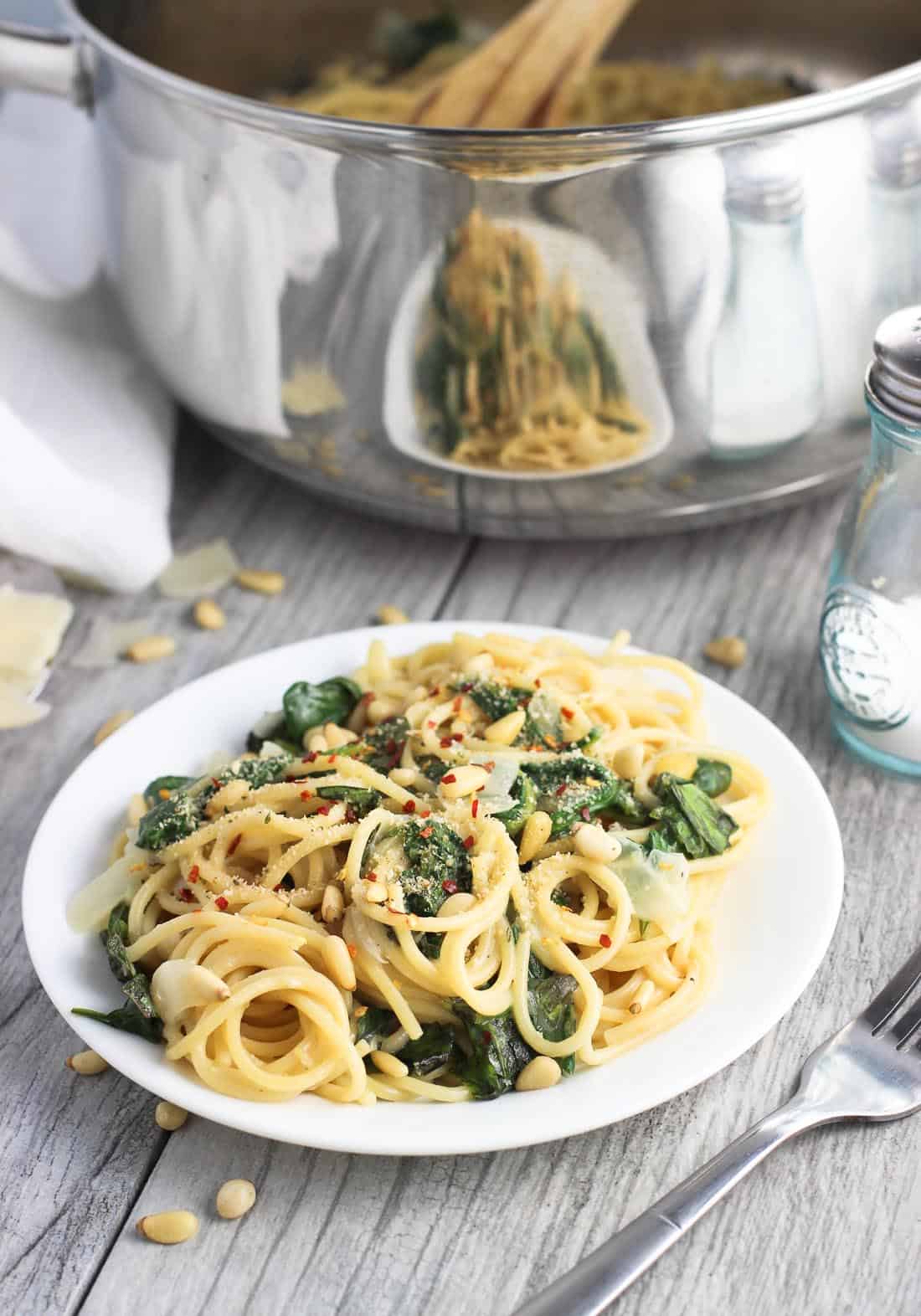 It's another 30-Minute Thursday - yayyy! It's no secret that quick meals are where it's at on weeknights. But sometimes throwing leftover protein over salad greens that you hope and pray aren't that wilted gets a little old. Same with leftover protein on bread you hope isn't stale, a PB&J...at least in my house!

I'm also all about quick and easy clean up (really who wouldn't be?!). Our apartment kitchen is small and we don't have many duplicates of dishes/utensils. When we moved here I was a minimalist wannabe and wanted the least amount of clutter possible. A nice thought, but when you're a food blogger it's self-induced torture. Case in point, I just bought myself a second whisk and it felt like the splurge of the century to not have to stop in my tracks mid-recipe to wash my one whisk over and over. Luxury!

Anyway, since one moderately-detailed recipe can clear out our cabinets and fill up our dishwasher in one fell swoop, I've been eying up one-pot main dishes big time...especially one-pot pastas. Pasta that absorbs up all the liquid and doesn't need to be drained? Easy, easy, easy. Plus we get to skip the step where I drain pasta and my glasses fog up from the steam. "I don't always drain my pasta, but when I do it's when I'm wearing glasses." 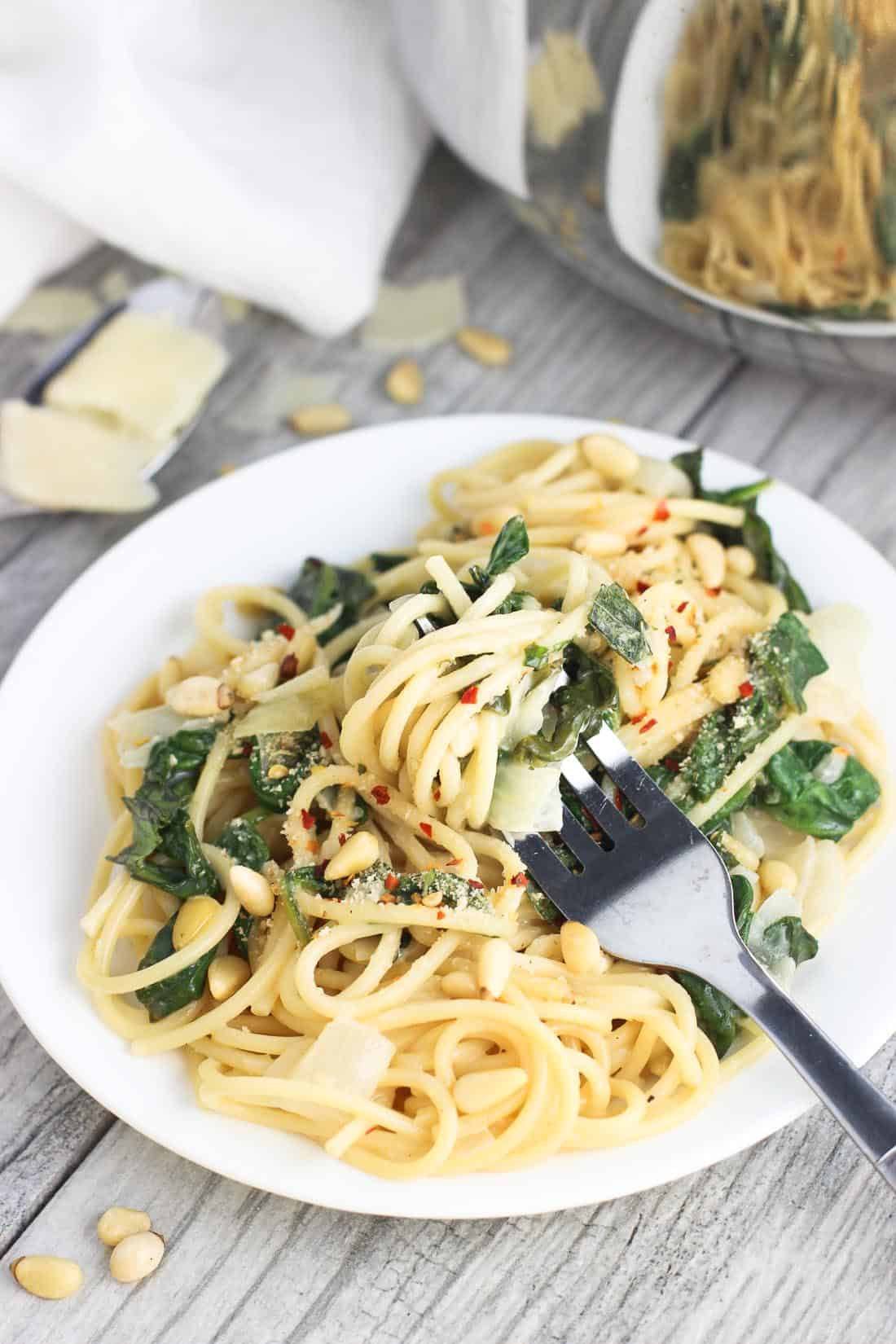 Now let's talk flavor. To start off this creamy lemon spinach one-pot pasta, the holy culinary trinity of olive oil, onion, and garlic are sautéed in the bottom of a big pot. Then spaghetti is cooked in a mixture of chicken broth and lite coconut milk, which sets the stage for a creamy and dairy-free sauce. Yes!

Toward the end of the cook time, a whole lot of spinach leaves are added along with a few herbs and spices, and everything is left to cook for a few more minutes, until the spinach has greatly reduced and most of (if not all) the liquid has been absorbed. Plate it up and there you go - creamy lemon spinach one-pot pasta perfection.

What's great about this one-pot pasta is that you can easily customize it to fit your tastes: 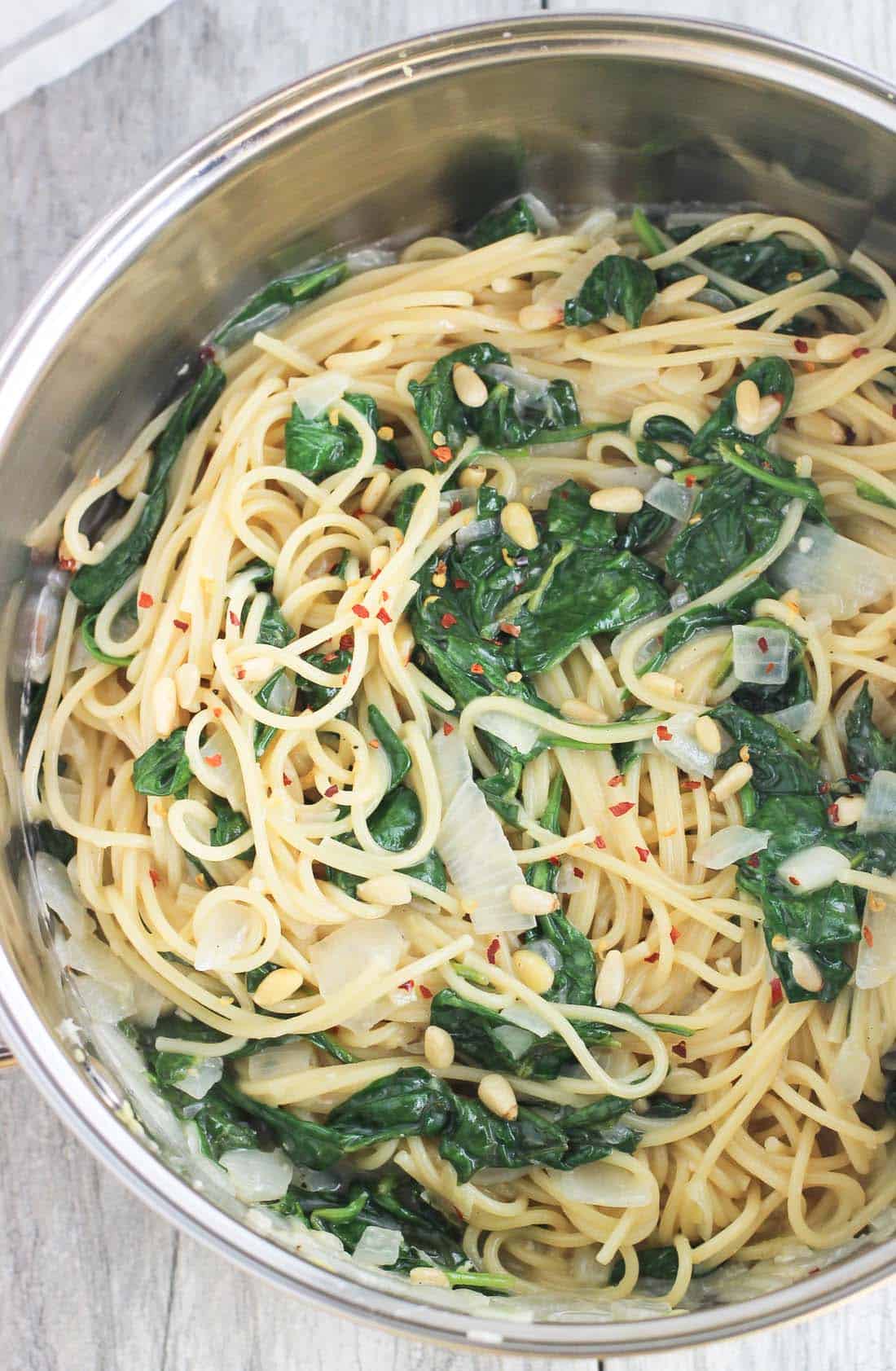 Brian likes pasta (because duh, it's pasta), but it's never his first pick when it comes to dinner. It probably isn't even his second pick either. The fact that he moseyed over to the stove and helped himself to some extra of this pasta was the highest form of praise in my opinion. That, and I also snuck a few forkfuls cold from the fridge the next morning if that says anything. This creamy lemon spinach one-pot pasta is a keeper! 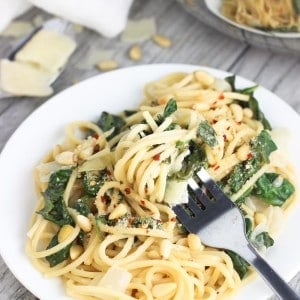 When reheating leftovers, I suggest adding an extra drizzle of coconut milk prior to heating to maintain the creaminess.

Psssst - My first contribution to 30-Minute Thursday was a recipe for Italian sausage quesadillas, which has worked its way into our weeknight meal routine. Sometimes we'll sub in leftover chicken if we have it around, making it even quicker but just as tasty. 🙂 You can check out the other 30-minute meal recipes from this month by scrolling down! 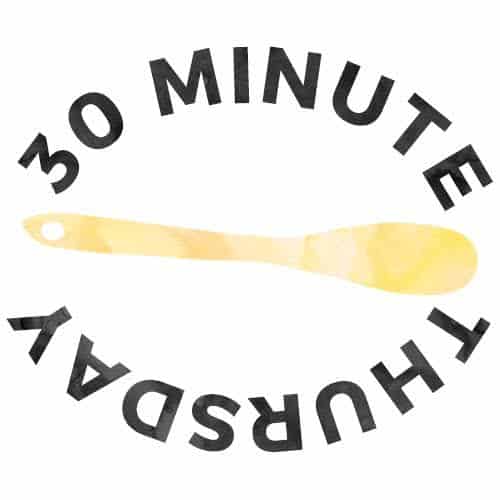 One Pot Lemon Thyme Chicken and Rice from Bake.Eat.Repeat.

Easy Baked Gnocchi with Tomatoes and Mozzarella from Floating Kitchen