These Spiced Sweet Potato Hash Browns are a new spin on a breakfast favorite! These hash browns feature a warm spice blend and can be made two ways - either traditionally on the stovetop or baked for a lighter option! 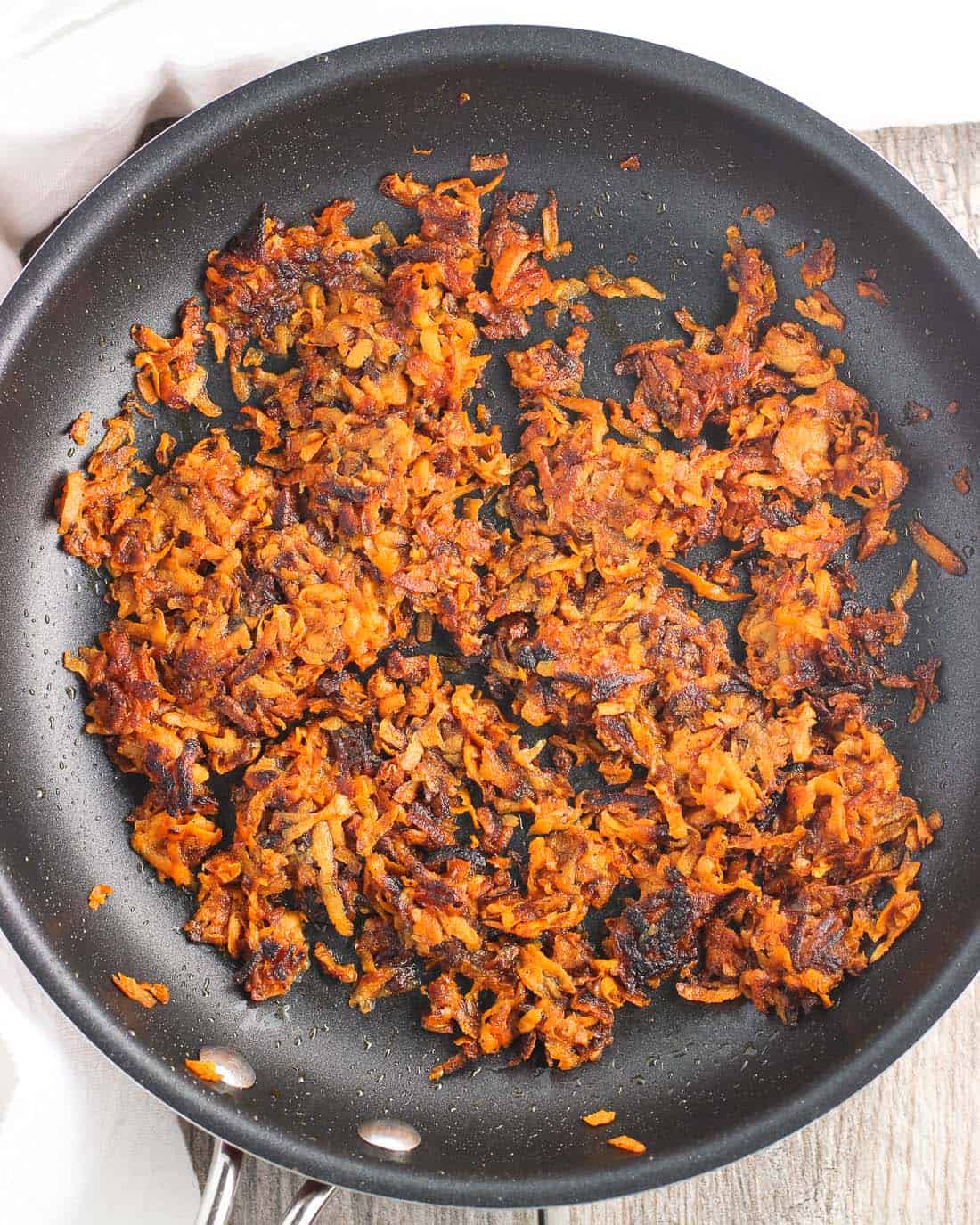 For a long (long, long) time I was 'ehhh' on breakfast. I always made sure to eat breakfast because it's the right thing to do (!) but I never got that jazzed about it. Toast or an English muffin, usually slathered with peanut butter and/or jelly was sitting on my kitchen table each and every day. Granted this was before I learned the love that is avocado toast, so my toast days back then erred on the side of being of a traditional (and boring) breakfast carb.

After the toast phase I went through a serious infatuation with vanilla Greek yogurt, mixed with bran cereal and chopped frozen strawberries. For about two years I froze my fingers chopping hard frozen strawberries every morning. Until one day, mid-chopping, I realized I had completely lost my appetite for my beloved yogurt/bran cereal/strawberry bowl. It's going on three or four years since and I still have no desire to eat it! Hello, breakfast burnout.

Currently I'm head over heels for all things savory in the A.M. Smashed avocado with smoked paprika and sea salt on a toasted sesame bagel thin (♥), eggs, even leftover dinner if my avo stash is gone. But one of my favorite, favorite special occasion breakfasts lately have to be breakfast burritos. Probably the epitome of savory breakfast goodness!

I love adding hash browns to my breakfast burritos, and with the heavy emphasis on healthy eating this time of year, I wanted to switch up my hash brown varieties. These are sweet potato hash browns that feature a mix of spices and can be made both the traditional way on the stovetop OR baked for a healthier option! 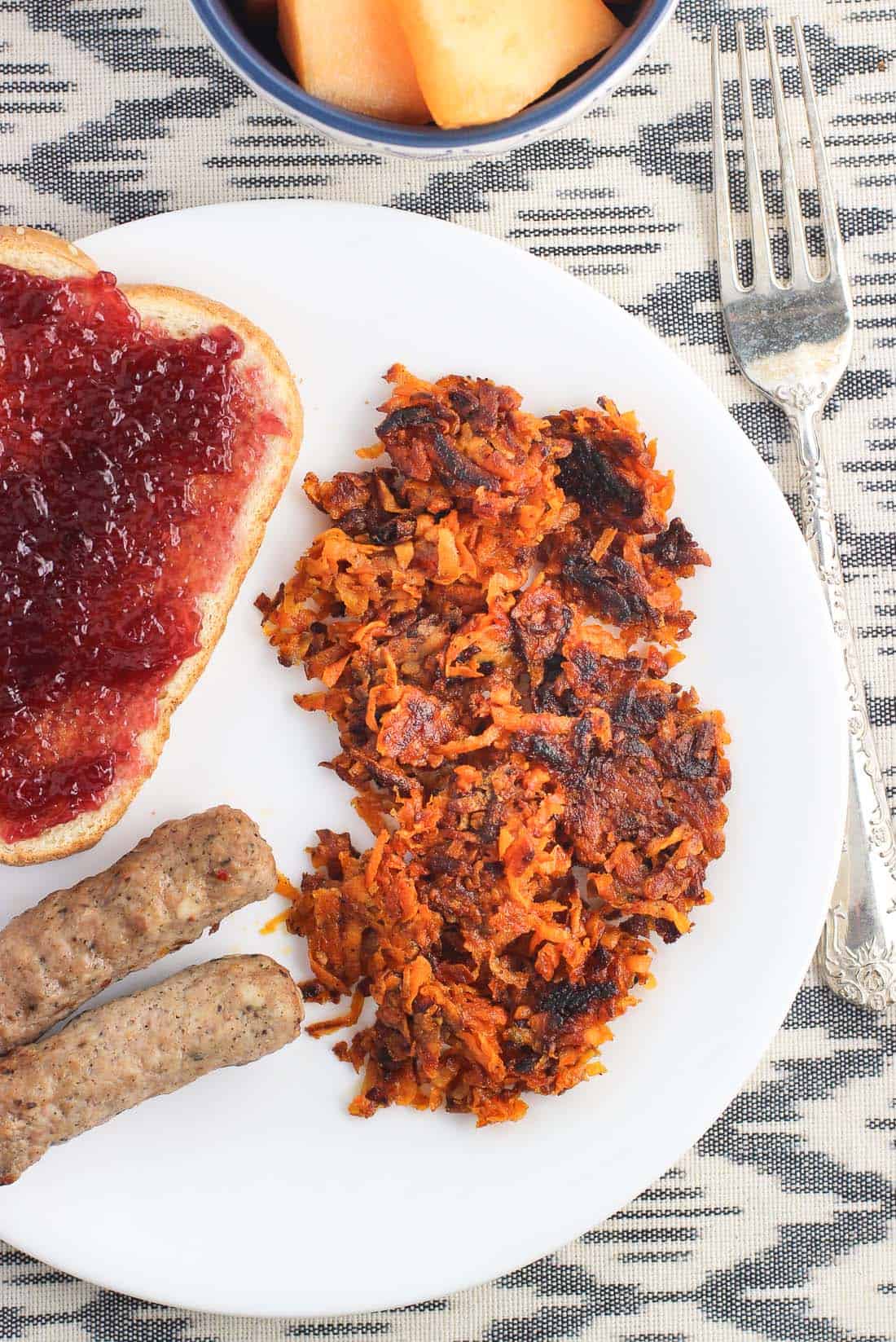 Let's dig into the traditional way first - crisped perfection made in a skillet with clarified butter (aka ghee). Ghee is used here because it has a very high smoke point, so it allows the sweet potato shreds to turn a deep brown without burning and smelling a little off. Plus I love the subtle nutty flavor that ghee gives, kind of brown butter-esque. I've only purchased ghee from the store, but there are plenty of tutorials out there for making your own at home. It's on my list for 2016!

Now onto the lightened-up (but still delicious) version - baked spiced sweet potato hash browns! As with a lot of baked versions of typically-fried foods, baked hash browns aren't an exact dupe of the stovetop version, but we really enjoyed them. I used a few in a recipe coming up next week to the blog, and then refrigerated the rest. Heating them up in an oven on 350 degrees F on a small greased baking sheet until they were warm and crisped up again? Awesome. A little sprinkle of sea salt over top and they were back to breakfast perfection. 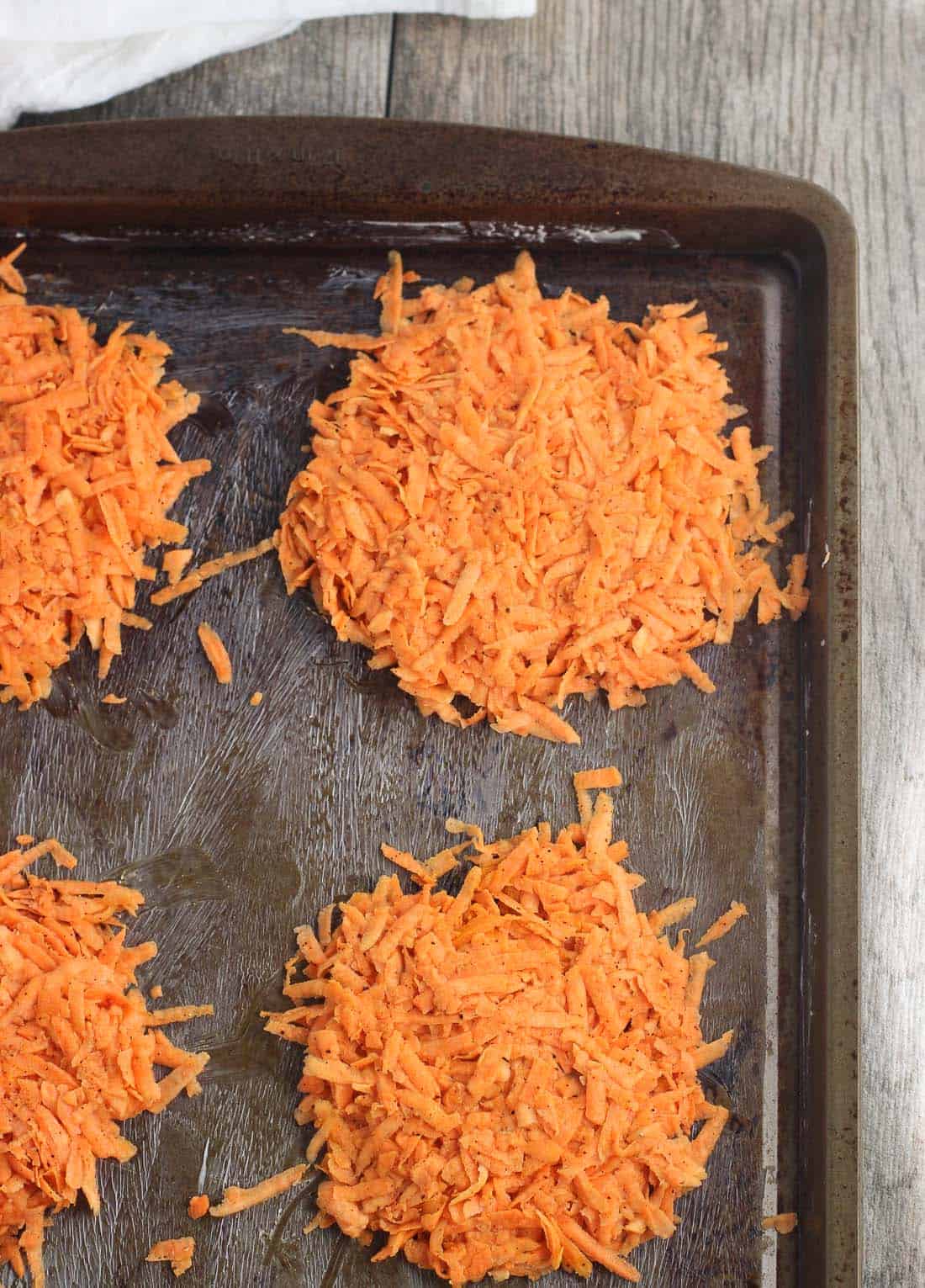 Real talk: I kept my *baked* sweet potato hash browns in the oven for a few minutes too long, about 30 minutes, and the outermost shreds were a liiiiittle crispy for my liking. If this happens to you, just remove the burnt offenders and you're still in business (which is what I did before I took these photos). 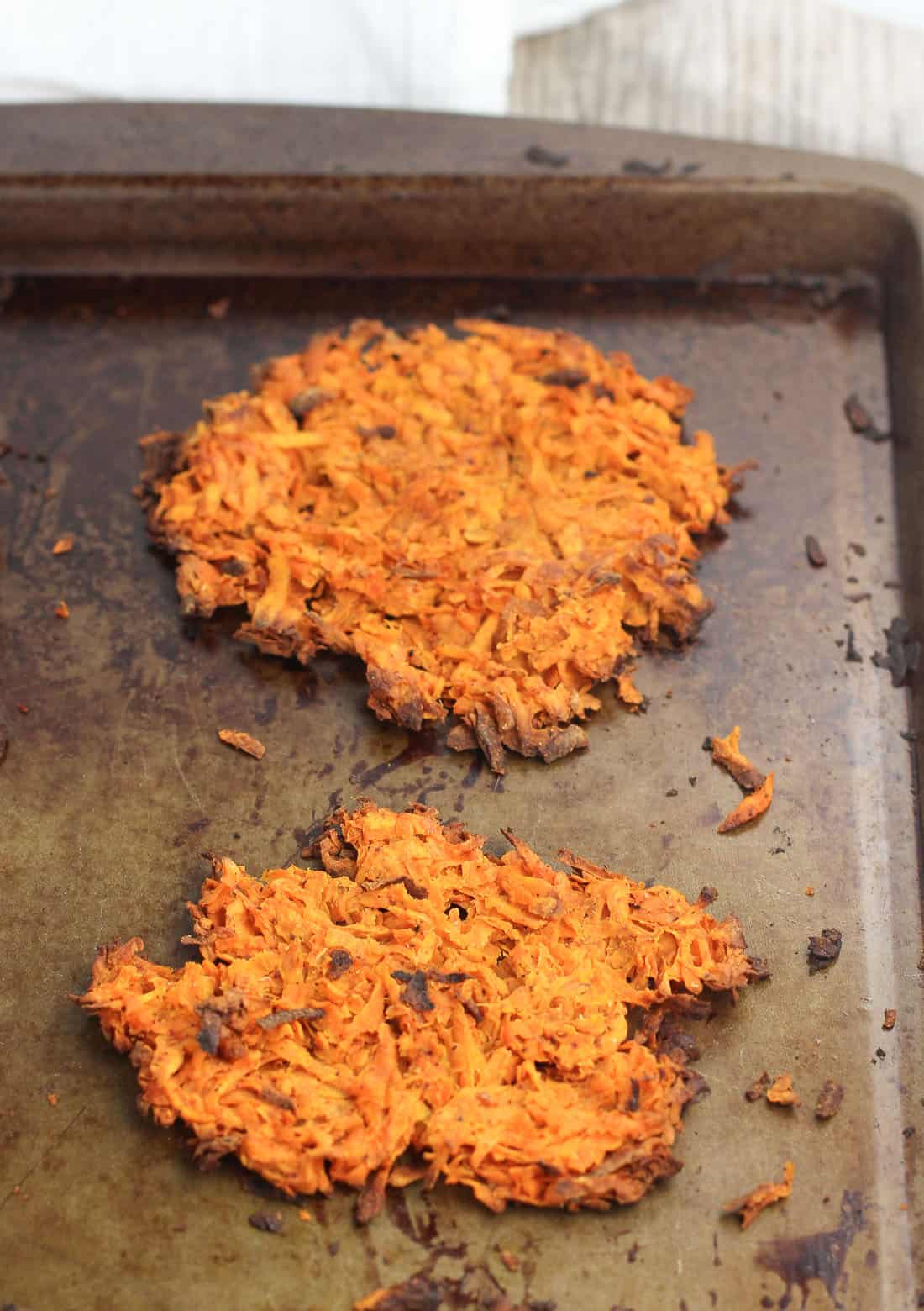 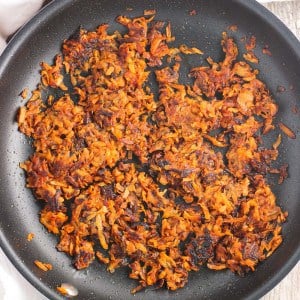 These Spiced Sweet Potato Hash Browns are a new spin on a breakfast favorite! These hash browns feature a warm spice blend and can be made two ways – either traditionally on the stovetop or baked for a lighter option!
No ratings yet
Print Pin Rate
Course: Breakfast
Author: Alyssa

To cook on the stovetop:

I enjoy the spice mixture listed above for a not-too-strongly spiced version of hash browns, but feel free to use your favorite spices! Refrigerate extras. To reheat, I suggest heating the oven to 350 degrees F and placing hash browns on a baking sheet. Reheat until they're warm and have begun to crisp again. Sprinkle with sea salt and serve!
Tried this Recipe?Tag @mysequinedlife - I love to see what you're making!

If you're looking for more sweet potato recipes, check these out! 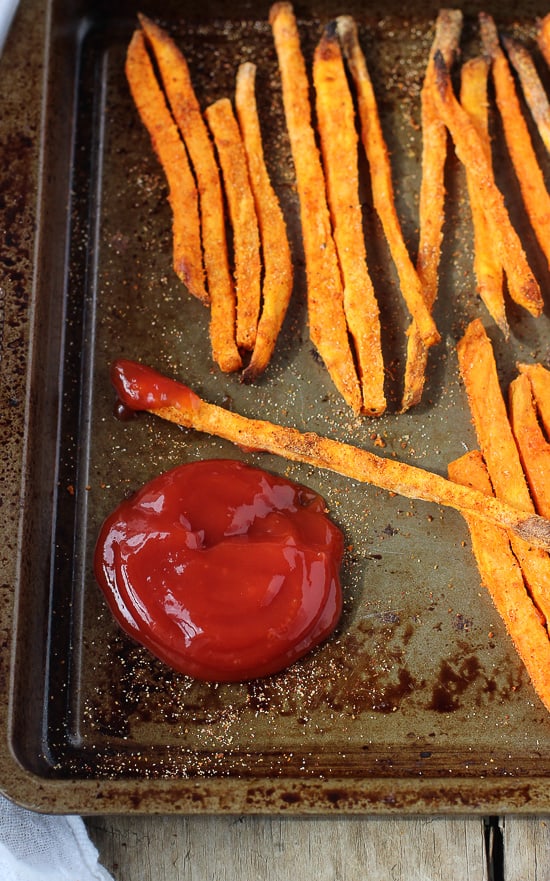 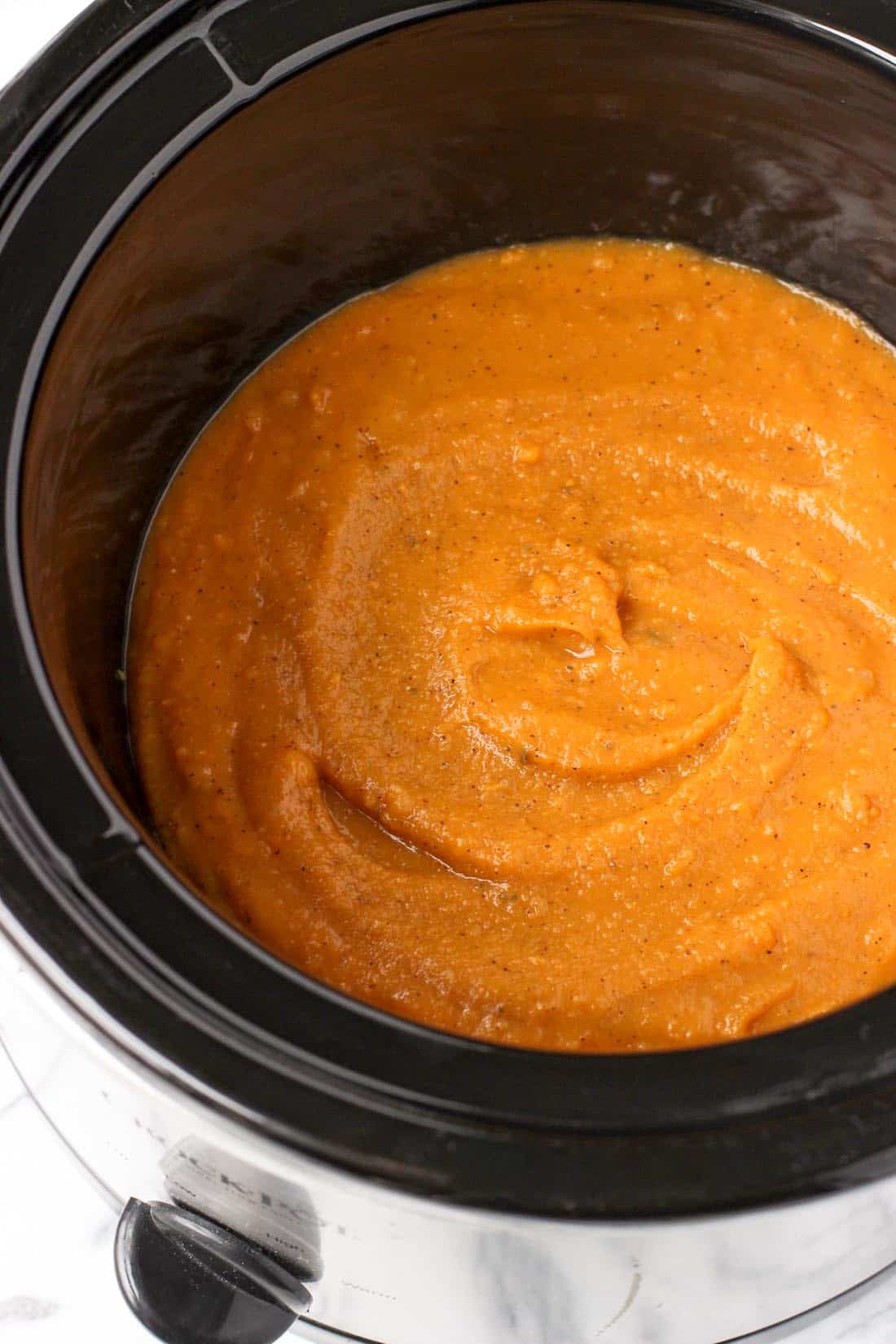