Pumpkin spice granola bars are a chewy and satisfying snack bar recipe that features toasted quinoa, pecans, oats, and more. These bars are held together by an almond butter and maple syrup mixture for extra heft and flavor! 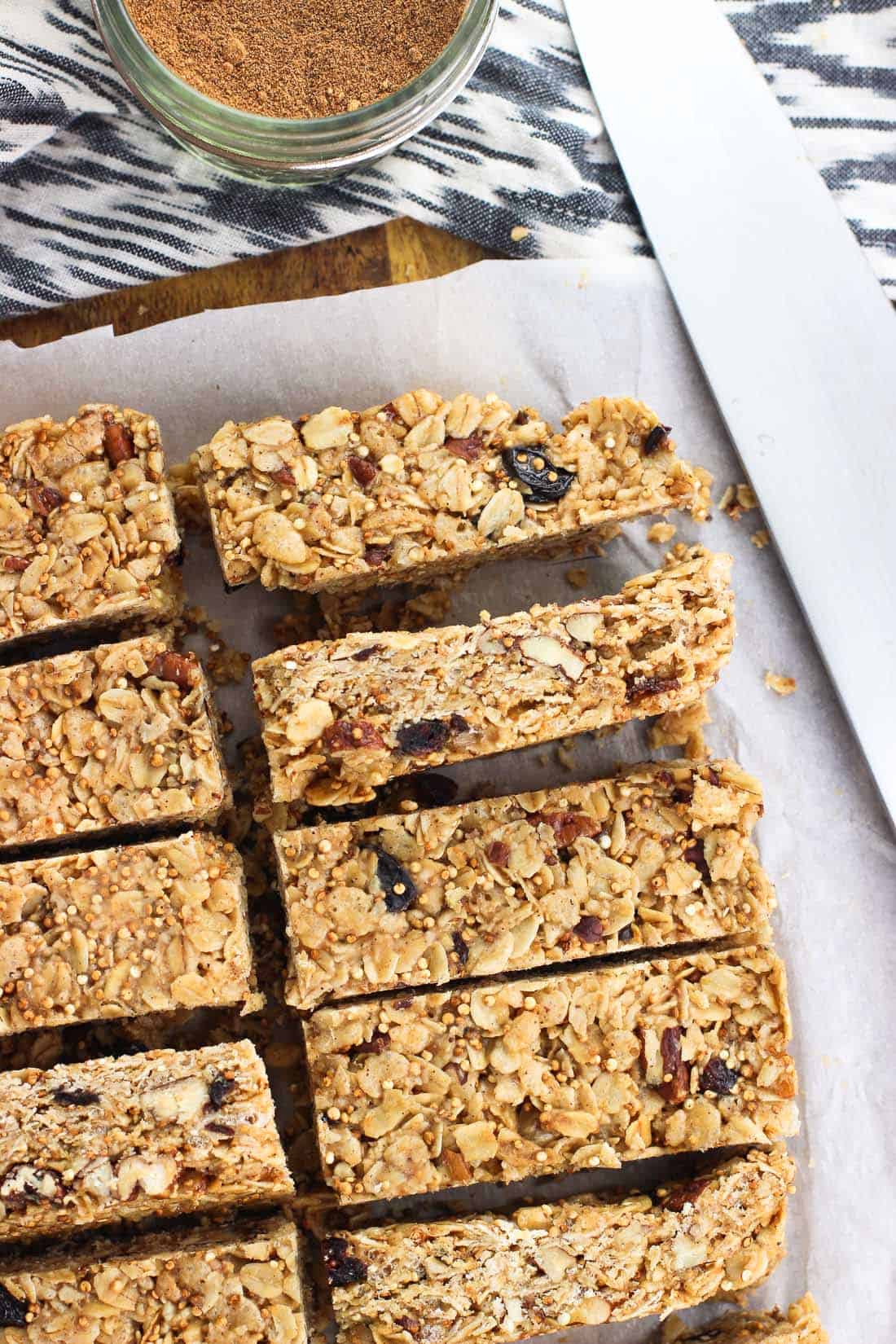 Ever have those recipes that stick around in your mind? The ones that you might not make all the time, but have a craving pop up for on a semi-regular basis?

The base recipe for these pumpkin spice granola bars is one of those for me. They first made their blog appearance a few years ago in this coconut quinoa granola bars version, but I've been playing around with a few of the ingredients every couple of times I've made them since to land on this warmly-spiced, vaguely-maple iteration. Just in time for fall!

...is it too soon to mention that particular 'f' word?? 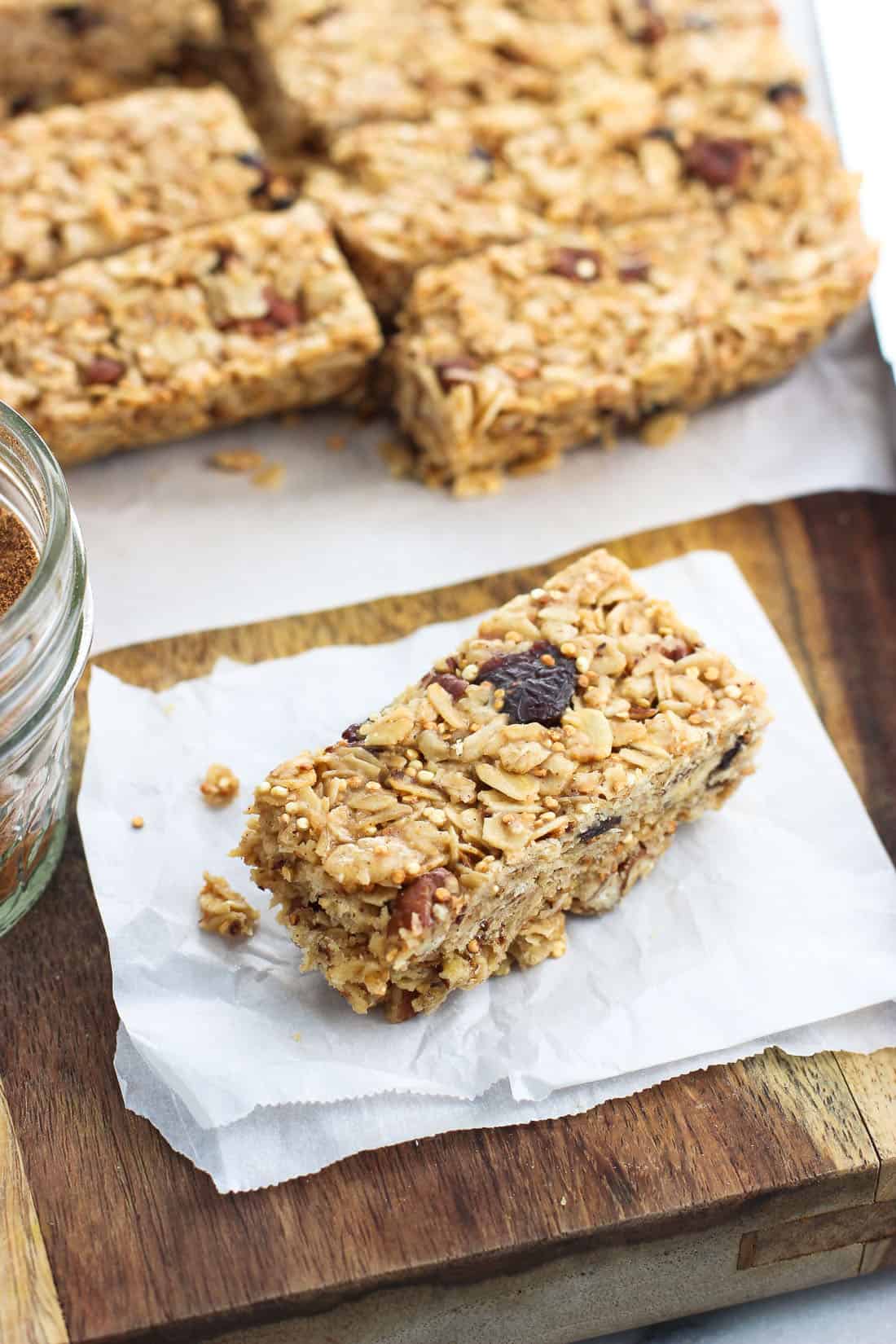 Something that's a requirement for a snack is staying power. Anything that isn't very substantial or can be eaten mindlessly doesn't really do the trick for keeping me full from lunch until dinner.

For instance, I'm a big fan of green juices, but sometimes they just don't cut it as a snack because I'll sip too quickly and my brain won't register, "hey lady, you just consumed enough calories to count as a snack."

These pumpkin spice granola bars are the opposite of that. Oats, pecans, quinoa, and toasted rice cereal make up the bulk of these bars, and are combined with an almond butter/maple syrup mixture to form a chewy, hearty snack. The toasted rice cereal provides a bit of crunch while dried cranberries and pumpkin pie spice play off of the maple syrup and round out the flavor profile of these bars.

And don't worry about the quinoa if you're giving it the side eye in the recipe card below. Dry quinoa blends right into this granola bar mixture and barely makes its presence known. Instead it delivers protein and fiber under the radar. 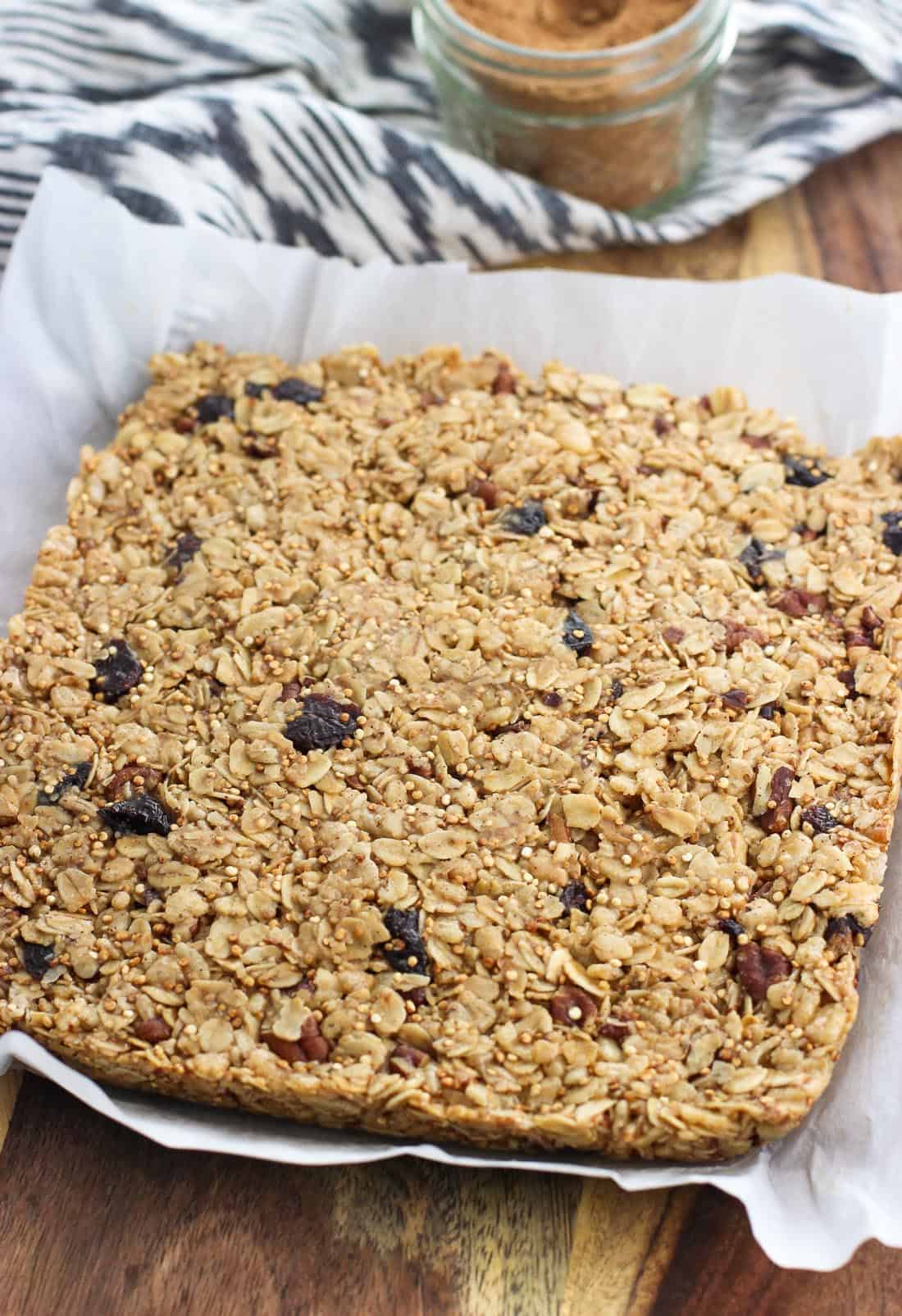 I hesitate to call these granola bars 'no-bake' because that kind of implies that you can just stir things together and call it good. These bars require you to turn on the oven and use the stovetop, but it's all for good reason!

The oven comes into play for toasting the oats, nuts, and quinoa. Toasting these ingredients gives them a boost of richness in flavor that add something extra to these bars in total, so I definitely recommend not skipping that step.

Then the liquid ingredients heat and come together in a pan on the stovetop, including the maple syrup, almond butter, oil, pumpkin pie spice and salt. Once everything is slightly bubbly and combined, remove the pan from the stove and stir in the vanilla extract. We want to wait until the pan is off the heat for that one so the alcohol (and thus, the flavor) of the vanilla doesn't cook off.

All that's left is to stir the toasted base ingredients into the pan with the liquid ones and press the mixture into a parchment-lined 8" x 8" dish. Leaving a bit of excess parchment paper along two opposite sides of the dish makes it easier to pull the bars out later on for slicing.

Refrigerate the bars for at least one hour, then they're ready for slicing with a sharp knife. As is the case with granola bars some oat clusters and crumbs may separate from the bars while you're slicing, but you can press them back into the bars before storing. Or you can think of them as your treat and just snack away. 🙂 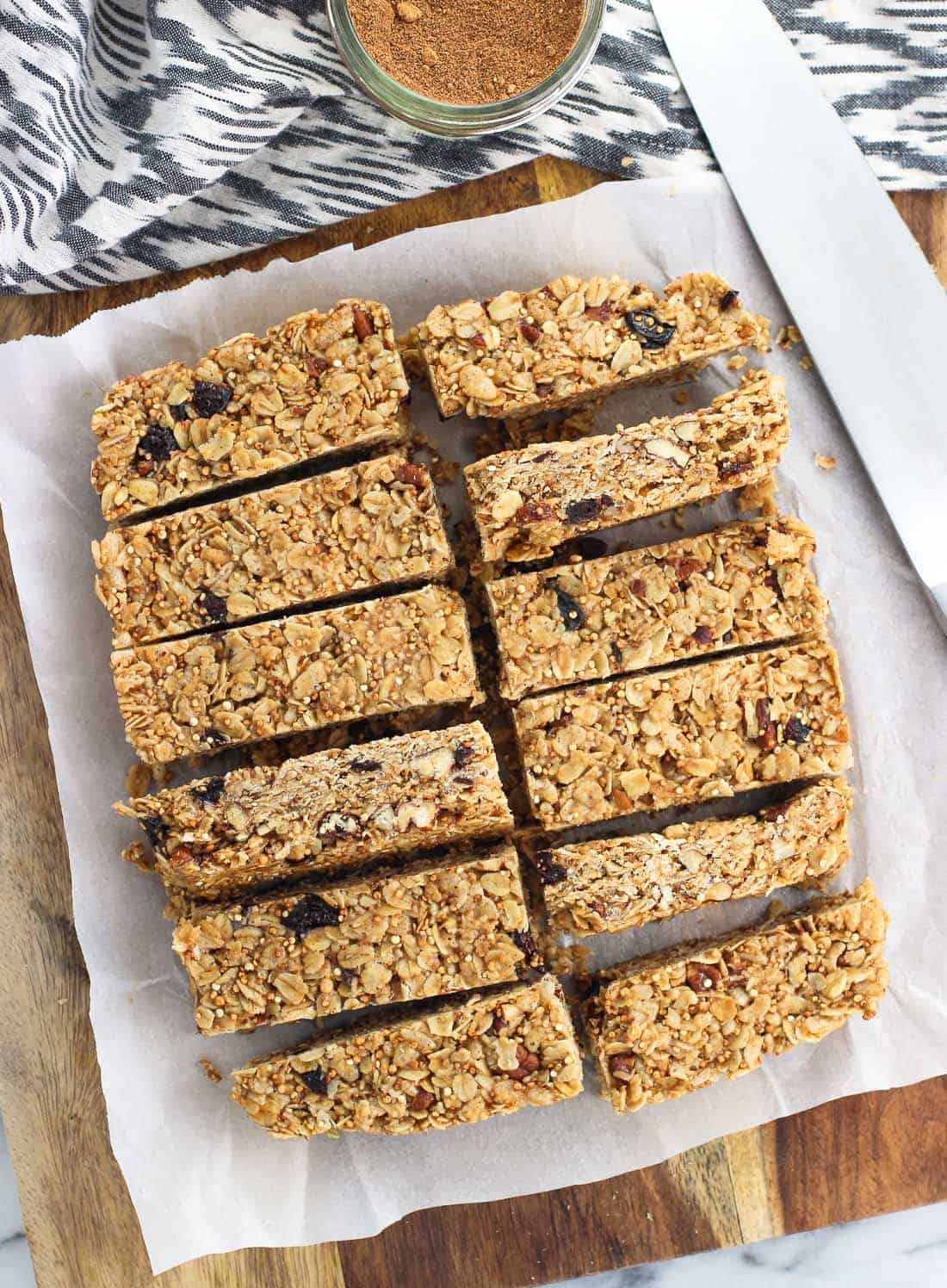 These bars hold up the best if they're stored in the refrigerator. They won't go bad if they're not refrigerated, but they'll be less firm and won't hold their shape as well. I've pulled one out in the morning before work and kept it out of the refrigerator until the afternoon without much of an issue at all. I just wouldn't leave one in my car on a hot day.

There certainly isn't any shortage of pumpkin spice recipes on the internet. 😉

If you're looking for healthy-ish/healthier classics, naturally sweetened pumpkin bread and healthy pumpkin muffins can't be beat. Both use whole grains and are sweetened with maple syrup instead of refined sugars.

While on the other side of the spectrum, pumpkin swirl brownies combine the best of fudgy brownies and pumpkin cookies into one decadent dessert. It's a great option for using up part of a can of pumpkin. 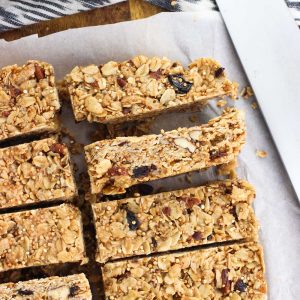