Crock pot white beans are cooked in a beer and mustard sauce for a flavorful and healthy side dish. This is a hearty slow cooker recipe with easy prep! 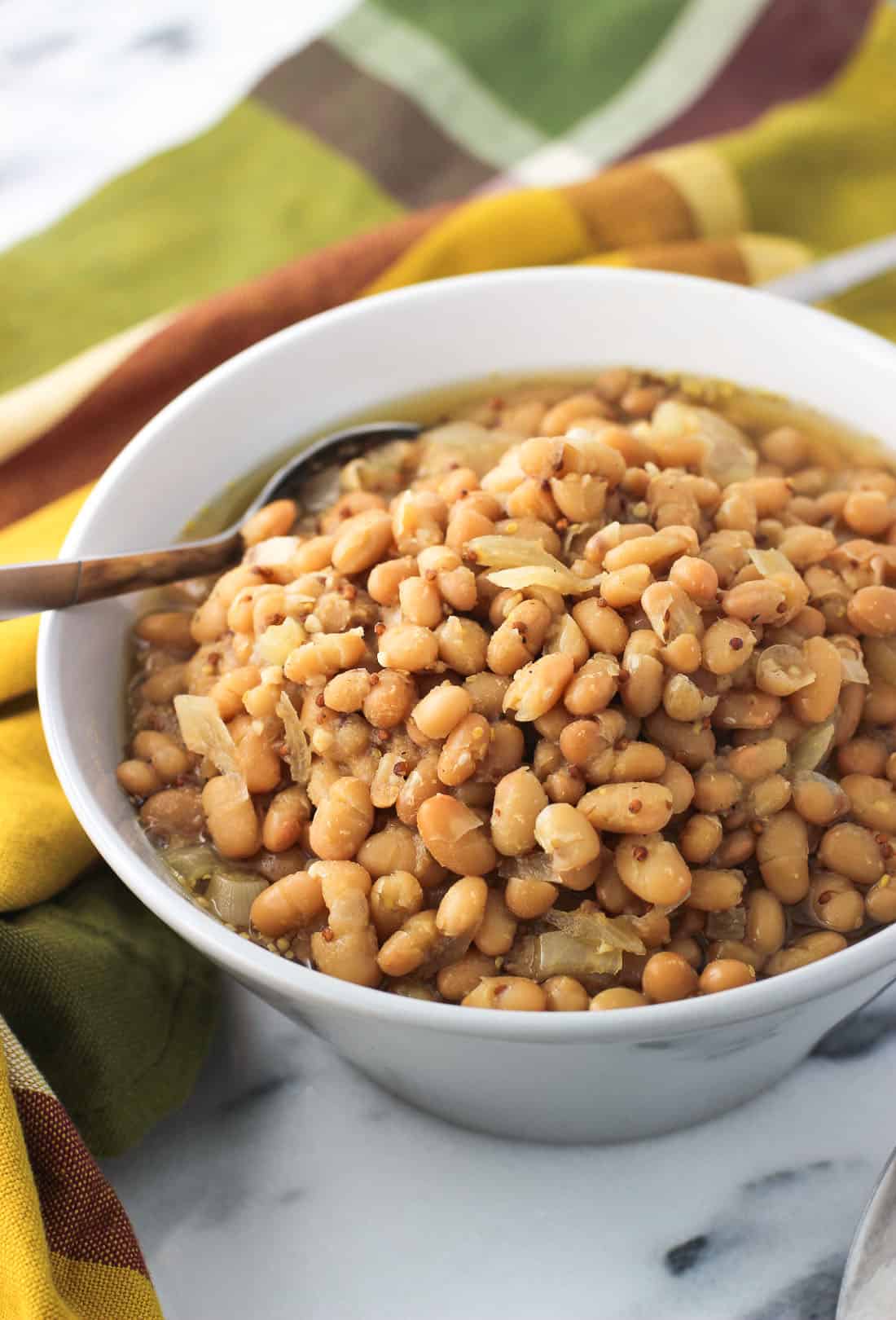 It’s a little weird how silly nuances of being a food blogger (instead of just a food eater) worm their way into your everyday thinking. Besides brainstorming, prepping, cooking, and tweaking a recipe, you start worrying about things beyond producing a clearly written recipe and a tasty final product. For instance, sometimes you find yourself stuck in a quandary focused on how to make a bowl of beans look ‘pretty’.

Have you ever thought to yourself, “oh wow, that’s a pretty bowl of beans”? I didn’t think so. They’re usually some shade of brown, in some sort of sauce, and can’t benefit from a fun component like piped buttercream or sprinkles. They’re just beans. In a bowl.

I never really came up with a good answer to the whole beautifying beans thing, so I took the requisite pictures and guess what? They look just like beans in a bowl. Accurately-depicted, delicious, slow cooker white beans with a whole grain mustard beer sauce. That’s good enough for me!

These beans began as an attempt to copycat restaurant beans, but much like the game of telephone, morphed into something great yet totally unlike the original. 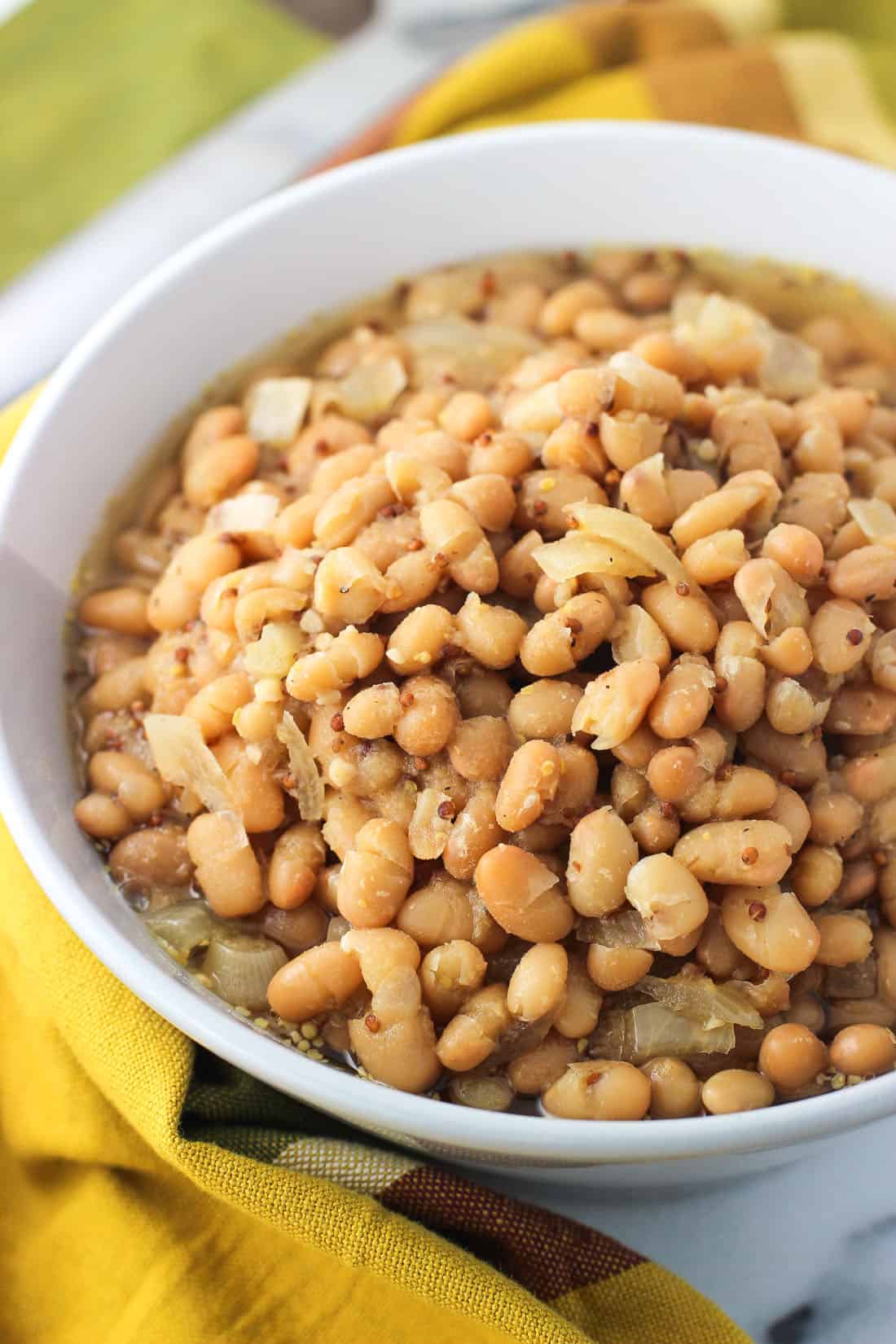 We’ve got a lot of flavors going on here: honey for sweetness, apple cider vinegar for some tang, a smidge of hot sauce for a (very small) bit of heat, and a full tablespoon of minced garlic. You know how I feel about garlic. ♥

The major players going on here are whole grain mustard and beer, hence the kinda wordy title up there at the top. Whole grain mustard is one of my favorite types of mustard to use as I love the extra bit of texture the mustard seeds give.

As these beans heat, the mustard seeds will disperse and coat the beans spreading that flavor around. And lastly we have beer! It adds an extra layer of flavor and plays nicely with mustard, honey, and vinegar, rounding out this hearty slow cooker side dish recipe.

Now you may have noticed this recipe uses canned beans, not dried. After unsuccessfully attempting to cook dried beans in my crock pot multiple times, even after soaking them and cooking them for a long while, I abandoned that effort and went right to canned. Even being pre-cooked, they benefit so much by slow cooking in a wonderfully flavorful sauce.

A benefit to this, besides less cook time, is easier prep. All you need to do is to stir together all of the ingredients in the slow cooker and add enough beer to cover everything. Easy as that! Four to five hours later you have yourself the perfect seasoned bean side dish. 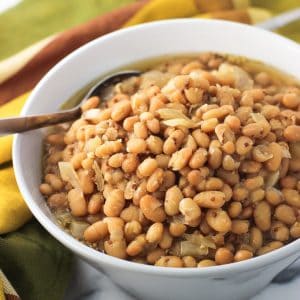 Beer: I suggest using an ale here, but feel free to get creative and use something darker like a stout if you like!