As an accountant, it's no surprise that I think about numbers, a lot. Even in my personal life, I'm a unit-price-calculating, Excel-formula-using machine. There's a picture floating around of four-year-old me sitting at the kitchen table with a calculator and a bank statement (doing my first bank reconciliation, I'm sure), and at roughly the same age I proudly declared while at the bank that interest is "when your money makes money".

I don't think my future career path shocked anyone. Sometimes though I'll just be wowed by the artistic prowess of others, their ability to debate philosophical issues, and other right-brained talents and wish for a moment my brain dabbled in those waters. Then I'll snap out of it, probably resuming my thoughts on how I'd go about quantifying the number of pizza slices I've eaten in my life or something like that.

That calculation may take awhile, but here's an easy one: How many times have I eaten homemade pretzel crust pizza, brushed with olive oil, piled high with garlic, fresh basil, bacon, thinly-sliced potatoes, and parmesan cheese?

None, before this baby! And I sure am making up for lost time.

Let's talk about the pretzel crust going on with this pizza. I mean, as if I couldn't love pizza crust more. With each bite you can taste the signature soft pretzel flavor shining through. Adding this whole new dimension to your homemade pizza isn't difficult, and only takes two ingredients I'm betting you already have in your kitchen - baking soda and water. You mix the two together in a large sauce pan (large so that it doesn't bubble up) and bring to a boil. Then you dip your uncooked dough for 15-20 seconds per side, let drain and cool off for a sec, then press into the pan as usual. It won't look like anything has happened right off the bat, but after a few minutes in the oven you'll begin to notice the pretzeling (is that a word?).

Crisp, crunchy, and pretzel-y - just how I like it! 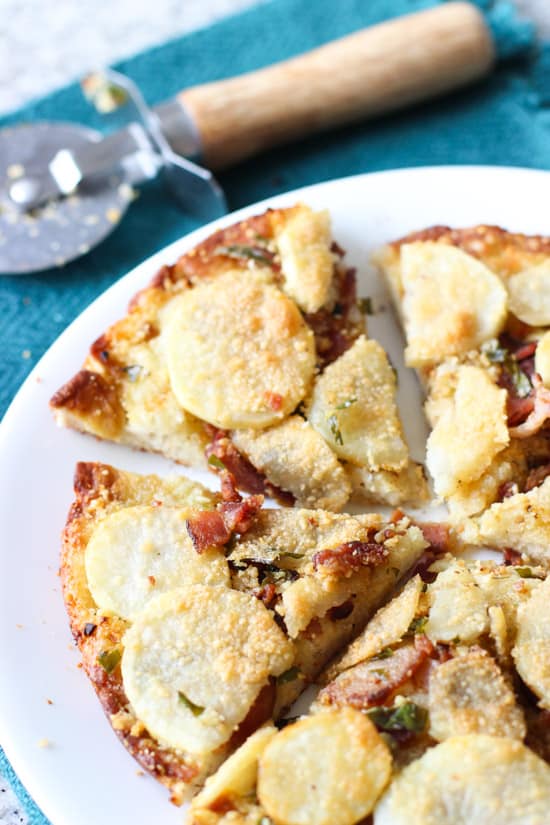 Besides being a crust girl, I'm also a sauce girl, which makes this sauce-less pizza a little bit atypical for my saucy taste buds. With all of the great flavors going on here, you won't miss it though - I promise! The brush of olive oil prevents the crust from being dry, so I suggest not being stingy with it. I mean, it's heart-healthy and all that, right? 🙂 Garlic and basil are also on the more traditional side as far as pizza toppings go for good reason (I mean hello, delicious!), and then there's bacon, which really doesn't need any praise because if ya know, ya know. 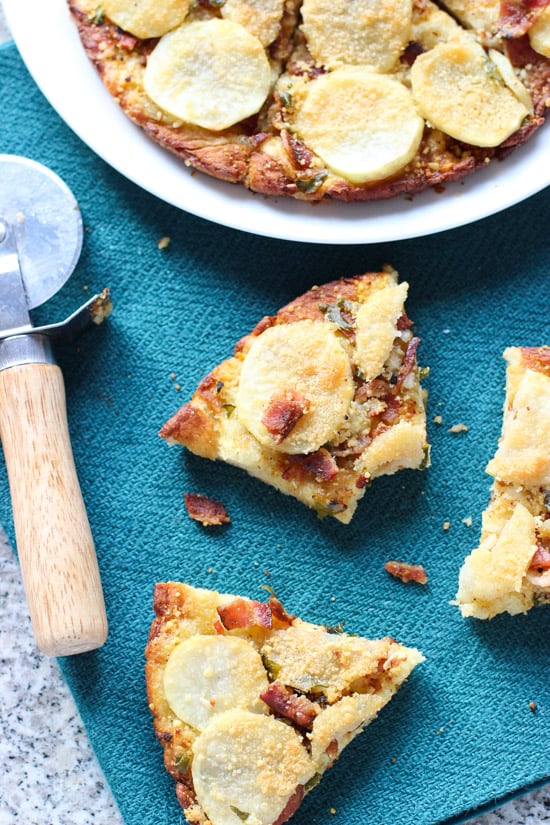 Topping the pizza are thinly-sliced potato slices, more olive oil (because), and a heavy sprinkle of Parmesan. Thankfully this pizza is baked in a 9" round baking pan, so the odds of scarfing down a much larger quantity than intended because it tastes too good are diminished. B and I split one of these pizzas and with a side salad, were optimally content for dinner. Though note that the crust recipe yields enough for two of these pizzas. If you have two 9" baking pans, two potatoes, and six slices of bacon...willpower be warned. 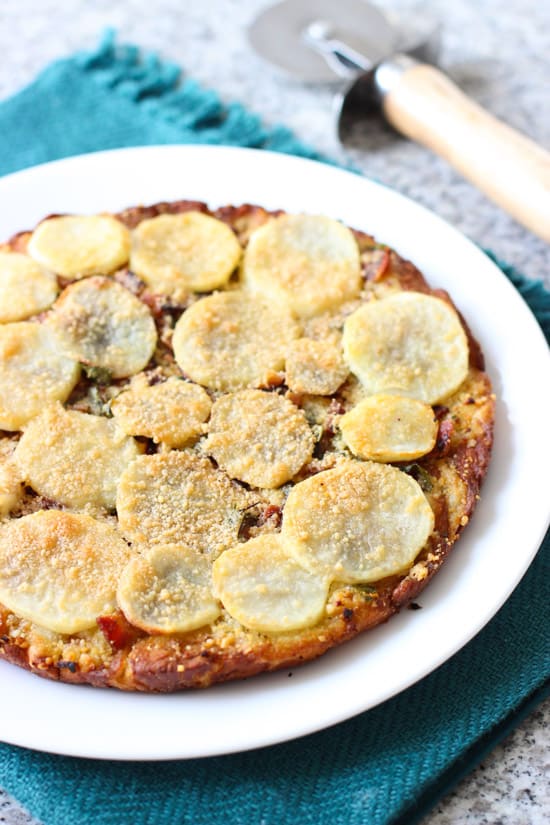 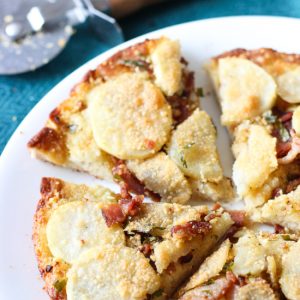 Crust recipe yields enough dough for two pizzas cooked in a 9" round baking pan. If only cooking one, you can wrap one in plastic wrap and freeze.
Tried this Recipe?Tag @mysequinedlife - I love to see what you're making!