A few simple ingredients take Parmesan Marsala Sauteed Kale to the next level. Kale sautés in a Marsala wine and Parmesan mixture with a little bit of cream for a flavorful, ultra satisfying side dish. 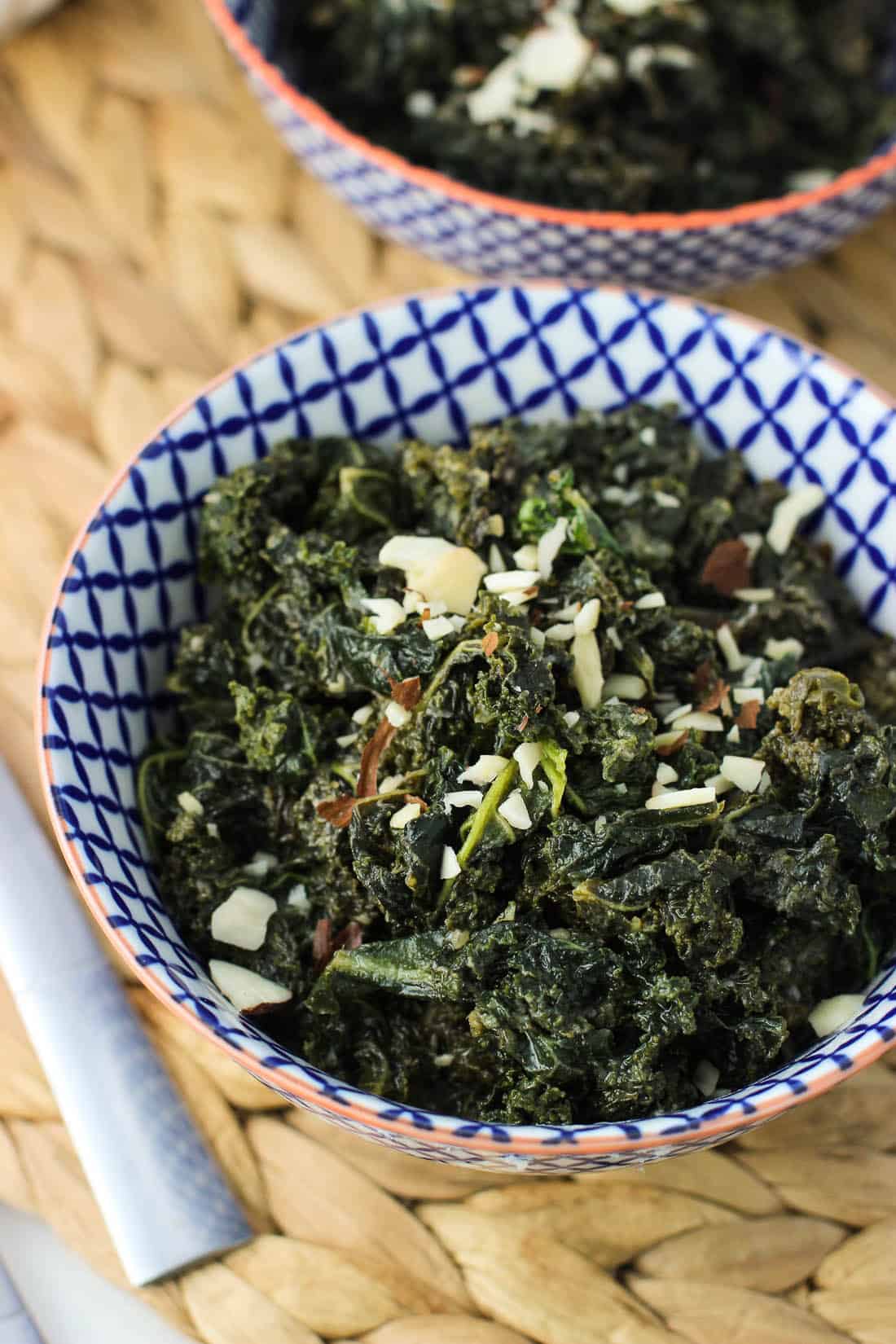 I can't remember a time in which I've been so excited to talk about a leafy green vegetable. Kale is one of those foods I want to high-five myself after eating because 'yes! that was healthy'. Typically I keep it simple with kale - sauté with a little garlic and olive oil and call it good - but adding a few ingredients transformed a pretty good side into an OMG GREAT side that was too good not to share.

This kale will be in both my regular dinner side dish rotation and my holiday menus, and it's not off the table that it could make an appearance as a part of my lunches, too. 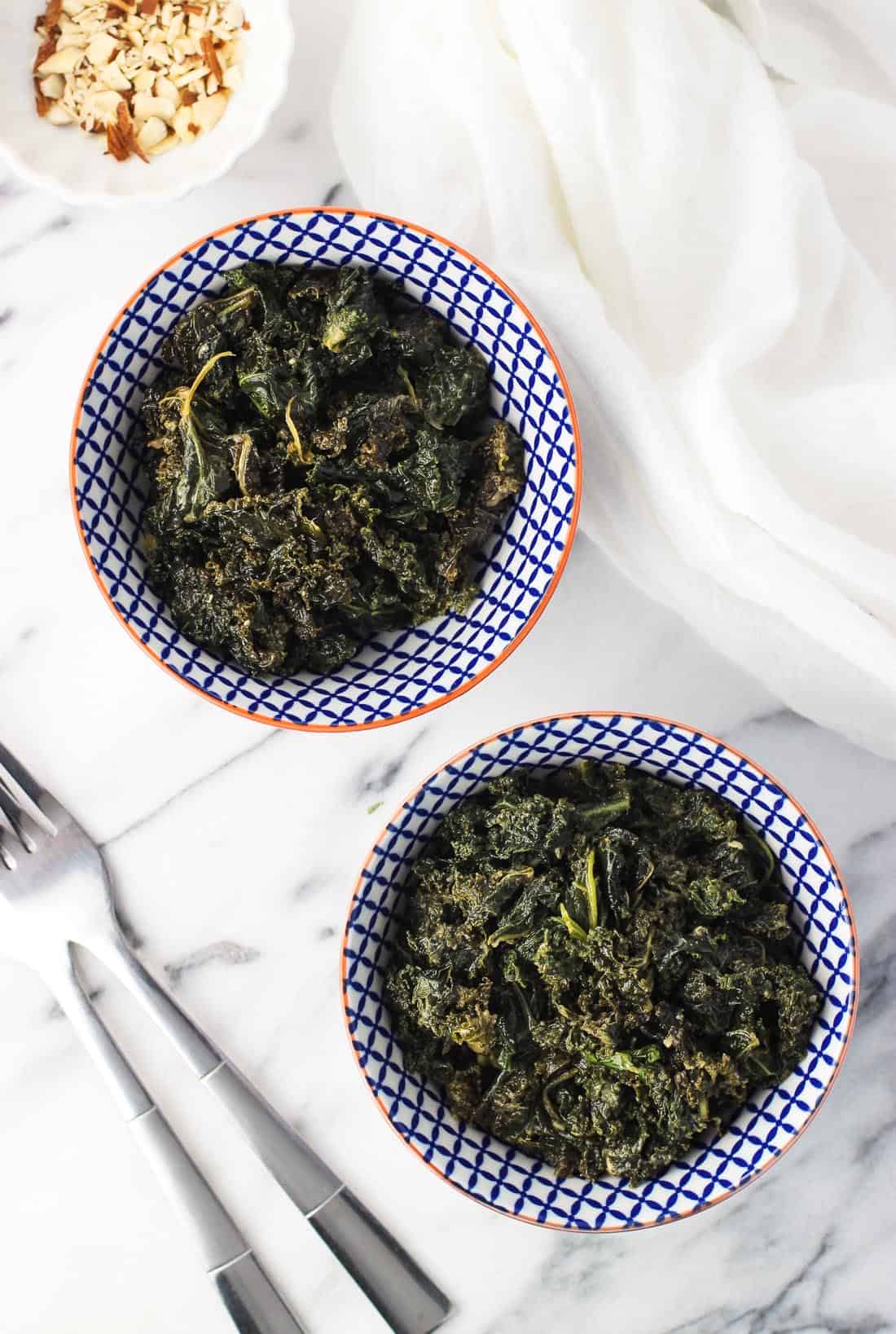 Surely these photos don't do this kale justice. I'm well aware they just look like kale...in a bowl. But what these photos don't convey is the bold Marsala flavor absorbed by the kale, made velvety smooth by a hint of cream and grated Parmesan cheese.

You can use whichever type of kale greens you like to cook with, but standard curly kale is my pick. Bonus that it's the easiest variety to find in the grocery store, too.

Now this may be controversial on some corners of the foodie Internet, but (at least of the date of this writing) I don't have big opinions on which kind of marsala cooking wine to use for this sauteed kale recipe. I go for whatever's on the cheaper end at the grocery store and have no complaints. While I see the argument for avoiding cooking wine entirely and using instead drinking wine in some recipes (like in Italian sausage and peppers - yum), this fairly basic kale recipe isn't one where I'd go that route.

The rest of the ingredients are basic basic, including olive oil, garlic, salt and pepper, cream, and Parmesan cheese. Other hard Italian cheese varieties, such as Pecorino Romano, would work just fine, too. Top it all off with crunchy almond pieces (optional, but recommended) and you have yourself a crave-worthy, healthy side dish.

(To be honest, every time I've made it I've wolfed it down before even glancing at the main dish.)

You know the drill if you've cooked with kale before, but the size of the bunch is deceptive. It looks huge! But kale reduces significantly as it cooks, so a skillet will be able to handle a whole bunch. Just add the kale in 3-4 batches, filling up the skillet initially but adding more as the kale wilts down in the olive oil and garlic and room opens up.

Once all of the kale has made it into the skillet, season it with salt and pepper and start adding the cooking liquid. In first goes the marsala, the flavor of which shines prominently throughout. After several minutes of cooking down, reduce the heat to low and add the cream and Parmesan.

While there's a bit of cream involved, the sauce won't be creamy. In fact, there's really no sauce here at all, rather a highly flavored cooking liquid that gets absorbed by the kale as it cooks. I have to resist the urge to drink the leftover cooking liquid straight up.

Every time I've made this sauteed kale with garlic and Parmesan, we've polished off the entire recipe as a side dish to dinner. I realize our voracity for kale might be greater than average, so in the recipe card below I have the serving size listed as 2-4 side dishes, but that may vary depending on your crowd.

See the notes below the recipe for a tip on how to prep the kale, and a few substitutions I've made in case you run out of something or want to use up ingredients you have on hand. As with many recipes on this site, there's some wiggle room here!

Another kale side dish we can't get enough of? This Greek yogurt kale caesar salad. The dressing is made healthier and there aren't any raw eggs to mess around with. It's SO great as a base for the protein of your choice in a main dish recipe, too.

Kale makes a wonderfully hearty addition to potato and white bean soup, as well. A better-for-you healthy ingredient sneaks into this one to make it extra filling. 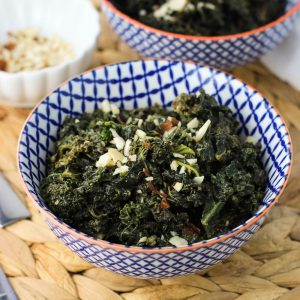 To prep the kale: You'll want to discard (or use in some other way) the thick, center stem from each leaf of kale. To streamline this process, I gather all of the leaves towards each other to one side, making it easy to slice away the stem. Then I give the leaves a few slices and they're ready to use. Substitutions: In a pinch I've subbed in some sherry cooking wine when I didn't have a full ¾ cup of Marsala. I've also used half-and-half instead of cream on occasion. Great either way!