Can we talk about Starbucks for a second? And can I share a semi-embarrassing story? I work in an office building that has a Starbucks on the first floor. Temptation central. Every two weeks or so I’ll treat myself to an afternoon latte, except for this week, because it was one of those that called for two.

I bolted back upstairs to my desk to drown my embarrassment in said latte and two of these fab honey maple cashew bars. Comfort snacks. 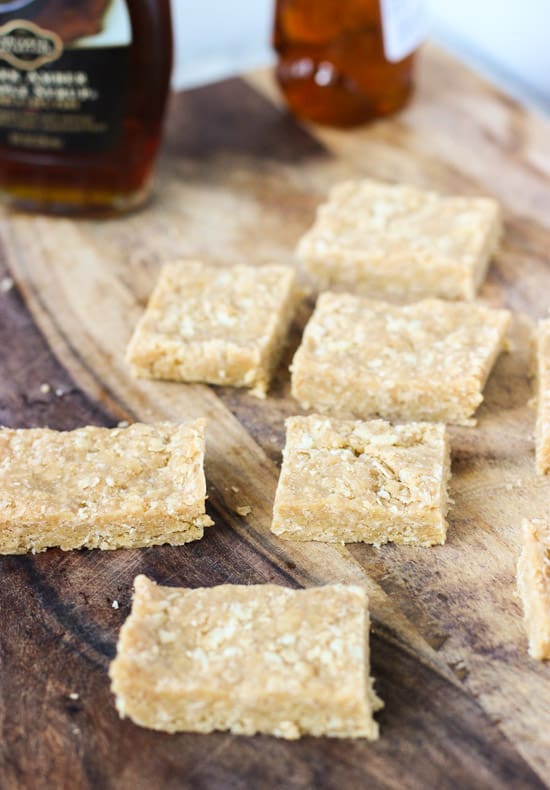 As long as you have a food processor, these bars are a cinch to make! You throw some cashews, honey, maple syrup, and a smidge of vanilla extract in there and let ‘er rip! At first the cashews will be chopped into little pieces, then they’ll start to combine with the wet ingredients, and within a minute or two you’ll have a slightly sticky and wet cohesive mass of cashew deliciousness. All that’s left is to press in the puffed rice cereal and oats so they’re well integrated, press mixture into a pan, and slice!

Now that it gets dark at 4:40 pm, my stomach starts growling for dinner when I’m still at work. Not good. These bars are a perfectly tasty and nutritious snack to stave off the stomach growls. They’re dense, chewy, and a little bit crisp (from the puffed rice), so you really feel like you’re eating a substantial snack. I love that so much more than mindless carb grazing. If I threw my willpower out the window, I bet I could polish off a whole bag of Chex Mix and still be hungry an hour later.

Not going to happen with these bars! 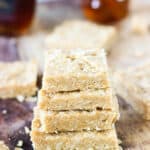 *Note: Step #2 may be easier if the cashew mixture is warm. If mixture isn't as workable as you'd like right out of the food processor, place cashew mixture in a small saucepan over low-medium heat until heated a bit. Then remove from heat and proceed with the cereal and oats.